Golf, pesticides and a father’s death 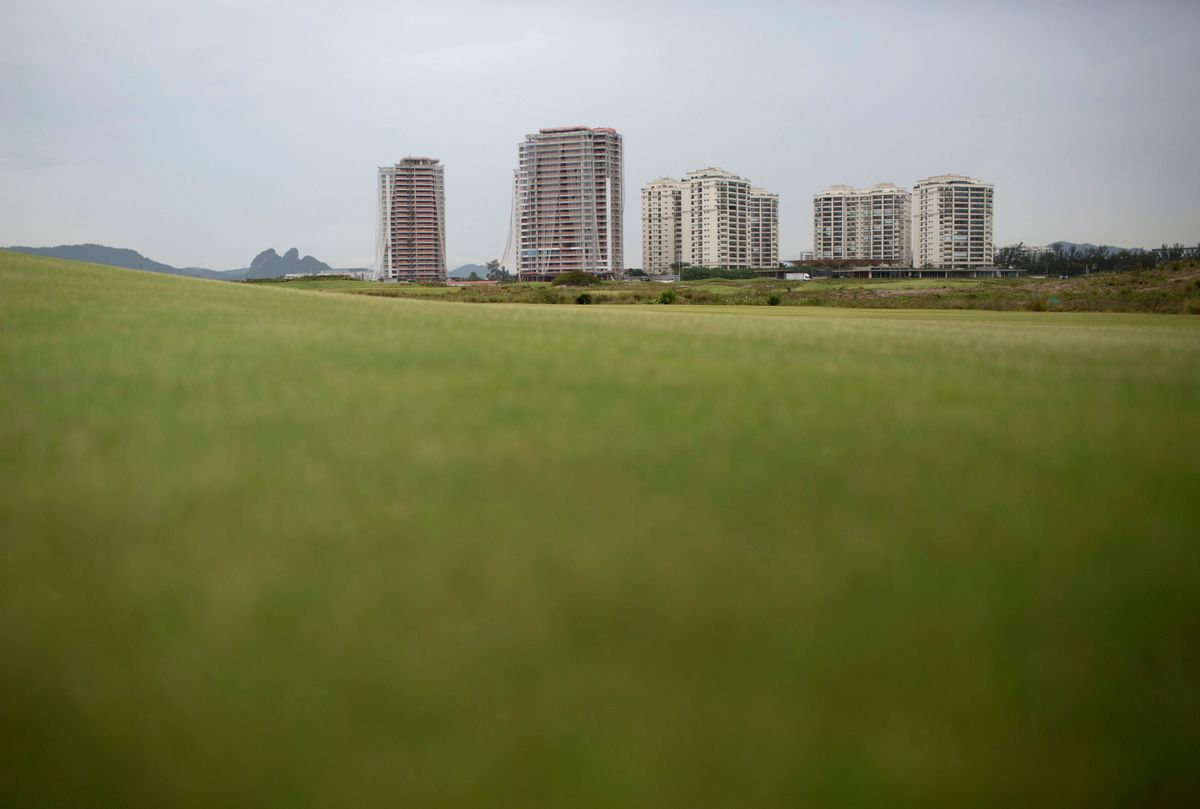 Harold Nisker can be seen on a 1980s home video, golf club in hand, at a course back-dropped by the Rocky Mountains in Banff, Alberta. “I think the greens are very bad. And I can’t putt,” he says to the camera. “Other than that I’m having a great time.”

Maybe partly an artifact of faded film, and maybe partly due to differences in turf management, the Banff greens and fairways do appear dimmer than the crayon green seen on the April broadcast of the Masters Tournament, held annually at Augusta National Golf Club in Georgia. The Banff turf also appears less vibrant than images of a course Nisker played back home in Toronto.

“It looks like a perfect natural space. Maybe too perfect,” Harold’s son, Andrew Nisker, narrates over aerial views of that Toronto golf course in his documentary, “Ground War.” “What magic did they use to keep it that way?”

Pesticides remain widely used to keep parks, playgrounds, playing fields — and golf courses — pristine, polished and preened. That manicured aesthetic and its potential consequences are examined in the 78-minute film, which currently is screening across the United States and Canada.

Nisker notes early how his father golfed nearly every day on a chemically-treated course, later dying of a rare type of blood cancer called mantle cell lymphoma. Already a filmmaker with a couple of environmental documentaries under his belt, Nisker wanted to get to the bottom of his dad’s illness and death. He had lived such a clean, healthy life. So, how did he get so sick?

While there is no way to directly connect his pesticide exposure to his disease, one form of non-Hodgkin’s lymphoma, Nisker said he became “highly suspicious” of the possible role of pesticides after learning about the array of products used on his father’s golf course.

Research suggests that some chemicals used on golf courses may raise risks of lymphomas and other health problems. One study, published in 1996 in the American Journal of Industrial Medicine, specifically addressed this concern. Researchers found that death rates attributable to non-Hodgkin’s lymphoma and to other cancers associated with the brain, large intestine and prostate were higher in a group of golf course superintendents compared to a group with similar characteristics who were not superintendents.

“There have been study after study after study in different countries linking pesticide use and non-Hodgkin’s lymphoma,” Richard van der Jagt, an oncologist at University of Ottawa at Ottawa Hospital, tells Nisker in the film. “I think there is enough data to say that it is very worrisome.”

Recently, pesticide risks have drawn intense media scrutiny amid a flood of litigation against Monsanto, and its parent Bayer, over alleged links between exposure to the weed killer Roundup and non-Hodgkin’s lymphoma. While Roundup is not commonly used on golf courses, it is widely applied in public parks, around schools and on fields where children play — something that also deeply troubles Nisker, a father of three.

Harold Nisker, who died of a form of non-Hodgkin’s lymphoma, played golf on vacation in 1988 in Banff. Courtesy Andrew Nisker home video.

A former school groundskeeper who won one of those Monsanto lawsuits, Dewayne “Lee” Johnson, has been actively supporting Nisker’s film. Despite being terminally ill, Johnson joined a panel discussion after an April screening of “Ground War” in New York City.

“When I heard about your dad, yeah, let’s check this one out,'” he told Nisker.

After his father died in 2014, Nisker began to take a closer look at just what in his father’s life may have contributed to his disease. His sleuthing uncovered a 2011 annual report from his father’s former golf course, detailing the pesticides that had been applied over the course of that year. Sixteen products were listed, including 2,4-D, once a major component of Agent Orange used in Vietnam. The International Agency for Research on Cancer, part of the World Health Organization, named 2,4-D a possible human carcinogen and studies also have found that the weed killer may disrupt the normal functioning of hormones in the body. Also on the list was chlorpyrifos, an insecticide that can affect the nervous system and infant brain development, and that the states of California and Hawaii have announced they will ban.

Van der Jagt emphasized that exposure to a pesticide does not mean a person will get sick. Industry representatives further downplay any risks.

“Pesticides used to maintain healthy golf course turf have been thoroughly tested by EPA,” the Golf Course Superintendents Association of America told FairWarning in a statement. “This agency evaluates pesticides to ensure they will not have unreasonable adverse effects on humans, the environment and non-target species when used according to label directions.”

“The responsible use of pesticides is essential to maintaining healthy turfgrass,” the group added.

The grass is always greener

The advent of color television in the late 1960s, and the subsequent broadcasts of the Masters, created an expectation among golfers for playing conditions on par with Augusta’s seemingly unblemished greens and fairways.

“People saw green golf courses and said, ‘I want that, too,'” said Jay Feldman, executive director of the nonprofit Beyond Pesticides.

The condition even earned a name: The Augusta National Syndrome. In response, golf courses strived to achieve the unrealistic standard through heavy use of chemical pesticides and water.

Even further back, about a century ago, the U.S. Department of Agriculture teamed up with the U.S. Golf Association to develop a program called Green Section for “the widespread dissemination of scientific knowledge of value, not only to golf clubs, but millions of owners of lawns and growers of grass all over America.” Then, after World War II, industries realized that many of the chemicals developed for war, such as DDT, could be marketed as fertilizers and chemicals for pest management on golf courses and beyond.

“Clover became a weed overnight,” said Feldman. “The issue is broader than golf. The story of the American lawn is a story of how a public relations campaign changed our culture and put us on the pesticide treadmill.”

In the film, Nisker attends the Golf Industry Trade Show in San Diego, which he likens to a “chemical convention.” Dow, BASF, Syngenta and Bayer were among the represented companies. “The golf industry is pretty much underwritten by the chemical industry so they continue to use their products,” Nisker said.

Brian Wilson, who studies sports and culture at the University of British Columbia in Vancouver, noted the close relationship between the golf and chemical industries. But he also suggested that the golf industry has evolved in its attitudes toward pesticides. In the beginning of his book, “The Greening of Golf,” Wilson cites a 1964 issue of a magazine for golf course superintendents that includes what he called a “scathing review” of Rachel Carson’s “Silent Spring,” the 1962 book largely credited with spurring the modern environmental movement. Wilson said that, during that time, managers were “essentially mass-spraying golf courses.”

“Then, move ahead to 2001, and in the same magazine they celebrate Rachel Carson,” he said in an interview. “The industry has changed their practices. They’ve become more targeted with the way they use chemicals.”

In a 2016 report on pest management practices, the association concluded that U.S. golf courses had increased their reliance on non-pesticide pest control since 2007. However, the group also reported that “turf managers are using non-pesticide control practices in conjunction with conventional chemistries, rather than as substitutes for them.”

Because it is located within a national park, the Banff golf course is forced to abide by more stringent environmental rules than courses elsewhere. As a result, Nisker said, the course has had an aesthetic similar to that of a Scottish course.

Scotland, the birthplace of golf, never did embrace pesticides to the same extent as North America. Groundskeepers there generally use far fewer chemicals in course maintenance compared to the United States or Canada. A few U.S. courses have begun following a similar model. At Vineyard Golf Club in Martha’s Vineyard, for example, groundskeepers have swapped synthetic chemicals for organic methods such as composted fertilizer, white vinegar and dish soap to kill weeds, and grasses selected based on natural resistance to diseases common in that area.

“We’ve been able to show people that you can actually have a golf course and not use pesticides,” Jeff Carlson, superintendent of the Vineyard Golf Club, tells Nisker in the film. “Golf did exist before pesticides.”

Nisker suggested that his home province has proven the same possibility for parks. In 2009, Ontario banned synthetic pesticides used solely to improve the appearance of lawns, vegetable and ornamental gardens, patios, driveways, cemeteries, parks and school yards. Known as “cosmetic pesticides,” these chemical products may be the same used for agricultural purposes or to thwart the spread of disease, but the ban was aimed at halting their use for aesthetics only.

An exemption from the ban was granted for golf courses. But golf courses must disclose the chemicals they use.

“We don’t need the pesticides. Our parks are doing just fine with the way they naturally grow,” Nisker said. “The kids love it. There’s no reason to be using it in other places in terms of just making lawns and gardens and playing fields look a certain aesthetic that we’re told they’re supposed to look.”

The United States generally lags behind Canada in both restricting the use of pesticides – and in transparency about the products being used. In the film, Nisker visits Montgomery County, Maryland, as a group of soccer parents helped push through a bill that would restrict cosmetic pesticide use on lawns. But industry and some residents fought back and, in 2017, a state court halted the 2015 law from taking effect.

Then, in May, a Maryland appeals court struck down that decision, allowing for the ban. “We conclude that the citizens of Montgomery County are not powerless to restrict the use of certain toxins that have long been recognized as ‘economic poisons’ and which pose risks to the public health and environment,” wrote Judge Robert Zarnoch.

Opponents of the ban have now filed a motion to stop the law from moving forward while they seek an appeal of the latest court ruling.

Responsible Industry for a Sound Environment (RISE) is among industry groups opposing the bill. Pesticides are “essential to maintaining public health and wellbeing, including protecting people from the spread of harmful illnesses like West Nile virus and Lyme disease, as well as protecting forests from emerald ash borer and Asian long horned beetle,” Karen Reardon, a spokesperson for RISE, stated in an email to FairWarning.

David Eastmond, a professor and toxicologist at the University of California, Riverside, suggested that if pesticides are used according to the product label “then it would generally be considered safe.”

Still, potential risks to children worry Eastmond. He said that children tend to be more active, to spend more time near the ground and to wear less clothing than adults — all of which can result in more contact with pesticide residues. Such exposure may raise the risk of asthma and cancer, as well as derail the normal development of a child’s body and brain. Emerging research on hormone-disrupting chemicals such as 2,4-D further suggests that even very tiny levels of exposure during critical windows of development can result in health problems later in life.

“I have faith in the system. I’m hoping that faith is well placed,” said Eastmond. “If you could get by without using these chemicals that would be preferable.”

Nisker agreed. He suggested that his health-conscious dad, who had lost some faith in the food system toward the end of his life, likely never thought twice about invisible chemicals surrounding him on the golf course.

“It’s sad my boys never got to meet their grandpa,” Nisker says in the film, as he visits his father’s grave. Yards away from that grave is the bright green fairway of the 10th tee of his father’s golf course.