Smart Watch: HBO's "Euphoria" is a party drug for some, effective birth control for others

Plus, Kevin Bacon and Aldis Hodge team up in a new cop drama for Showtime, and two happy returns! 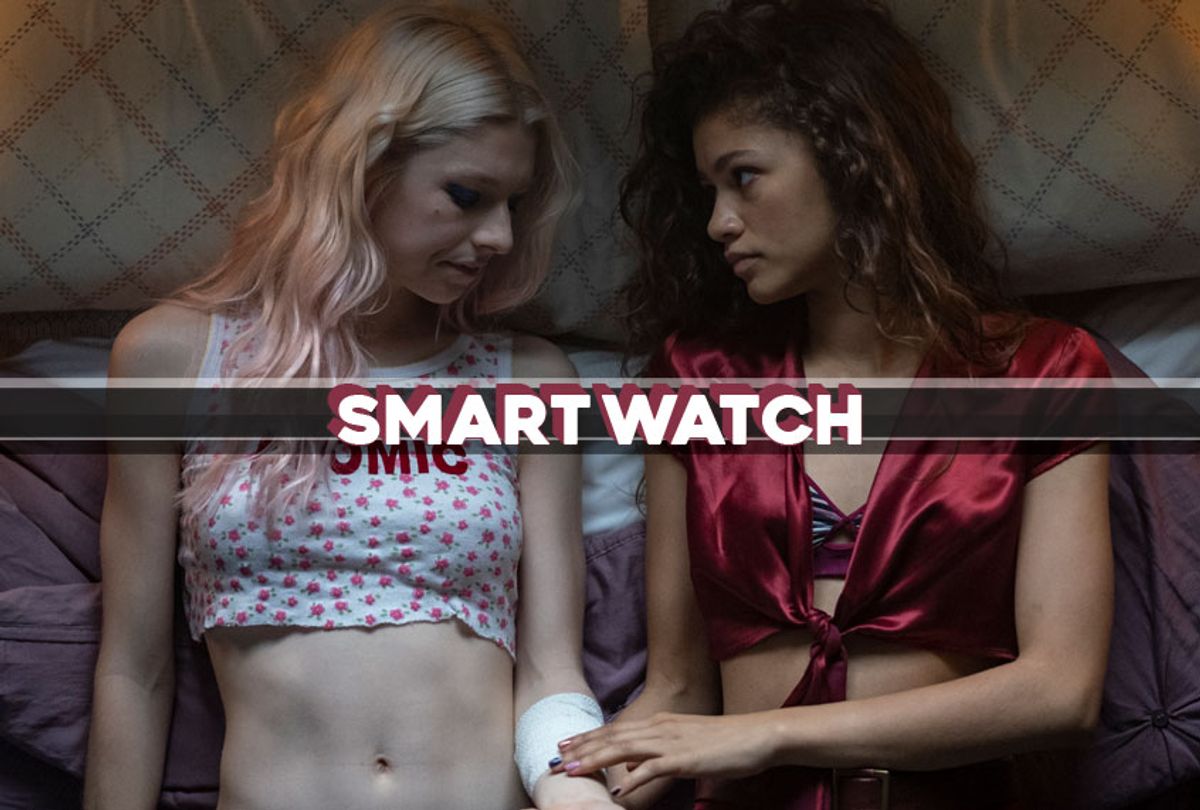 Nightmares can be beautiful, too. That was the thought that crossed my mind at the end of the intensely provocative, neon-saturated opening episode of this series, an hour during which Zendaya’s main character Rue is seen hoovering all types of drugs she obtains from all manner of sources. And that’s the tame part.

Sam Levinson’s depiction of out-of-control teen suburbia drowns the viewer in casual banging and floods us with scenes of young women and men confusedly navigating a world of little-to-no adult supervision, where hormones fly free and an "anything goes" attitude toward sex rules. Prudish viewers need not apply here, and even if you think that description doesn’t apply to you, the series premiere is designed to test that theory. A few scenes made me simultaneously glad not to have any teenagers in my home, and desperately want to shrink into the crevices between my couch cushions to live out the rest of my days among the dust bunnies, crumbs and loose change.

Because if there’s any truth to the colorfully heightened, confidently libertine “Euphoria,” what kids are seeing, telling each other on their mobile devices and learning about intimacy should deeply concern everyone. On the other hand, anyone who came of age in an era where phones didn’t take or send pictures might feel that way,  a different way of saying that this series isn't designed to speak to post-millennial concerns.

Lest I sound like a convert to conservative family values groups bent on censoring TV, the very audience “Euphoria” will offend the most, the series calms somewhat from its brash start into an empathetic portrait of what it means to be a kid born in the shadow of disaster and growing up in an era informed by it. Rue’s formative disaster is 9/11, and we meet the party-drug loving teen in her mother’s womb — the last time, she explains with melodramatic teenage angst, that she was happy, content.

Rue admits she’s an unreliable narrator, but from her perspective that’s mostly because she’s been hooked on pharmaceuticals at an early age, the result of a nervous parental response to her counting lighted tiles on the ceiling. Where Rue is most honest is when she talks about her bonding with a new best friend Jules (Hunter Schafer), who is new to town and, like the actor playing her, happens to be trans. Levinson doesn’t make a point of dwelling on Jules’ identity any more than anyone else’s, although a charged and explicit encounter with an older man is painful to witness from the standpoint of vicarious sensation and the awful power differential between the girl and her illicit adult — and very statutory rapey — hook-up.

Viewers of a certain age watching these adventures in free and predatory suburbia may take issue with Levinson’s simultaneous efforts to sympathize with and exploit these wild actors playing in a time when everything is perceived to be a crisis.

But despite the scenes of uncomfortable sex — explained, via Rue’s narration, as the result of Gen Z’s lifelong absorption of dick pics and online pornography — Levinson never fails to spotlight the fragility and confusion and, yes, sadness underneath that bravado.

“City on a Hill,” premieres Sunday at 9 p.m., Showtime

The value of vintage rises and falls depending on the season. That statement typically applies to fashion, but it’s also true in television. For example, to say Showtime’s “City on a Hill” contains tonal echoes of the groundbreaking series “Homicide: Life on the Street” marks it as an instant must-see for a certain segment of viewers closely eyeing the jewels of TV’s modern golden age.

For others the more obvious draw are the names Matt Damon and Ben Affleck; the pair are attached as producers, with Kevin Bacon starring alongside Aldis Hodge.  Then there’s series creator Chuck MacLean’s specificity of setting — Boston, specifically, in the early 1990s when the city’s cops wore their racism as brazenly as their acceptance of corruption and a quid pro quo approach to whatever passes as justice.

All of these components mingle and merge into a drama that looks, moves and sounds like one of those great ‘90s cop series your TV-acquainted friends were begging you to watch but maybe you never did, which made you part of the reason series like “Homicide” hung on by their quick of their fingernails until the networks decided that critical acclaim and industry awards weren’t enough to keep the lights on.

Anyway, I mention that particular series because it’s one of Tom Fontana’s calling cards in the same way that “The Town” re-legitimized Affleck. If there’s a reason that “City on a Hill” glides the story of Hodge’s assistant district attorney Decourcy Ward’s uneasy alliance with corrupt, burned-out but not quite finished FBI veteran Jackie Rohr (Kevin Bacon) through its opening three episodes, it is in no small part due to Fontana’s guidance as showrunner.

The executive producer (along with MacLean and Beantown’s favorite non-Wahlbergs) has run many other series since, but along with MacLean and fueled by Aldis’ simmering intensity and Bacon’s depiction of a sinewy, perpetually inebriated but indubitably skilled navigator of a thoroughly bent justice system, he’s building something at once current and resilient here.

But then, a viewer would have to desire to spend time with a team of people who need one another but don’t particularly enjoy each other, at a time when Naughty By Nature was still getting radio play.

This particular story tags along as Rohr and Ward methodically start to close the net on a family of armored car robbers led by Frankie Ryan (Jonathan Tucker, who's done roles like this so frequently that it would be shocking if he weren’t in this thing). Frankie and his crew, including his hot mess of a brother Jim (Mark O’Brien) hail from the working-class neighborhood of Charlestown, a far cry from the world of moneyed professionals where Ward and his wife Siobhan (Lauren Banks) reside.

Class differences also mark a separation between Ward and the philandering, trashy Rohr, who’s barely there for his family and all but ignores his wife (Jill Hennessy). The version of Rohr that’s on the job is another matter. Boston cops hate him for his habit of snaking cases out from under them, and Ward’s boss would rather cut deals to keep him from making the district attorneys look foolish. He’s a man who can somehow manage to pull whatever strings he wants, and the general consensus is that everyone is better off if Rohr is pulling strings either on their behalf or at some puppet show on a stage furthest way from them.

This breeds the central tension of “City on a Hill,” particularly when the series zooms in on Ward’s day to day struggles to be an effective player in a city that is at best overtly dismissive of its black residents and its problems, and in a casually racist workplace that regards Ward as a so-called “affirmative action hire” despite his accomplishments.

Where “City on a Hill” works is in scenes featuring Hodge and Bacon’s lawmen connecting as outsiders who, despite their differences and disdain for one another, take pleasure in sticking a thumb in the eye of the system. There are no complaints about the performances in this piece, particularly from the principals and Amanda Clayton, who lends a grimy steel to the role of Frankie’s beautician wife Cathy.

Even so, it isn’t as if the kind of story in this “City” hasn’t been told elsewhere and many, many, many times on television and in other places such as New York, Chicago and, hint hint, Baltimore. The familiarity of its framework doesn’t necessarily have to be a deterrent, and we haven’t viewed this story as told by these skilled actors. Another attraction of vintage, after all, is that a person already has an idea of the shape it’ll take over time. And if this reads like your kind of story, "City on a Hill" introduces itself ably enough to merit buying into both the joint and separate stories of its central duo for at least an hour or three.

We’ve written about this extraordinary series several times, and in case you don’t believe what we have to say about it, so have many other critics. However, it’s also a CBS All Access series, which means most Americans probably have never seen this extraordinary spinoff of “The Good Wife.”

As of this weekend CBS is airing the first season on its broadcast network, removing all barriers and excuses to find out why boosters are so nuts about it.

Summer is the season of daytime drankin’, making it a terrific time to check in with this modern miracle of a comedy. Why do I describe it thusly? Well, can you think of another time in our lives when we need to be reminded of the craziest, most amazing, terrifying and wondrous examples that human beings are capable of great accomplishment, invocation, and generally not being trash?

Anyway, the series premiere follows a “Believe It or Not!” theme, featuring the stories of Lawnchair Larry (played by Colin Hanks), Phineas Gage (Steve Agee) and the Greenbrier Ghost, or the mystery of what happened to a woman presumed to have died from her period. Cheers!