Democrats are seriously tackling the climate crisis: No more half-measures or neoliberal compromises 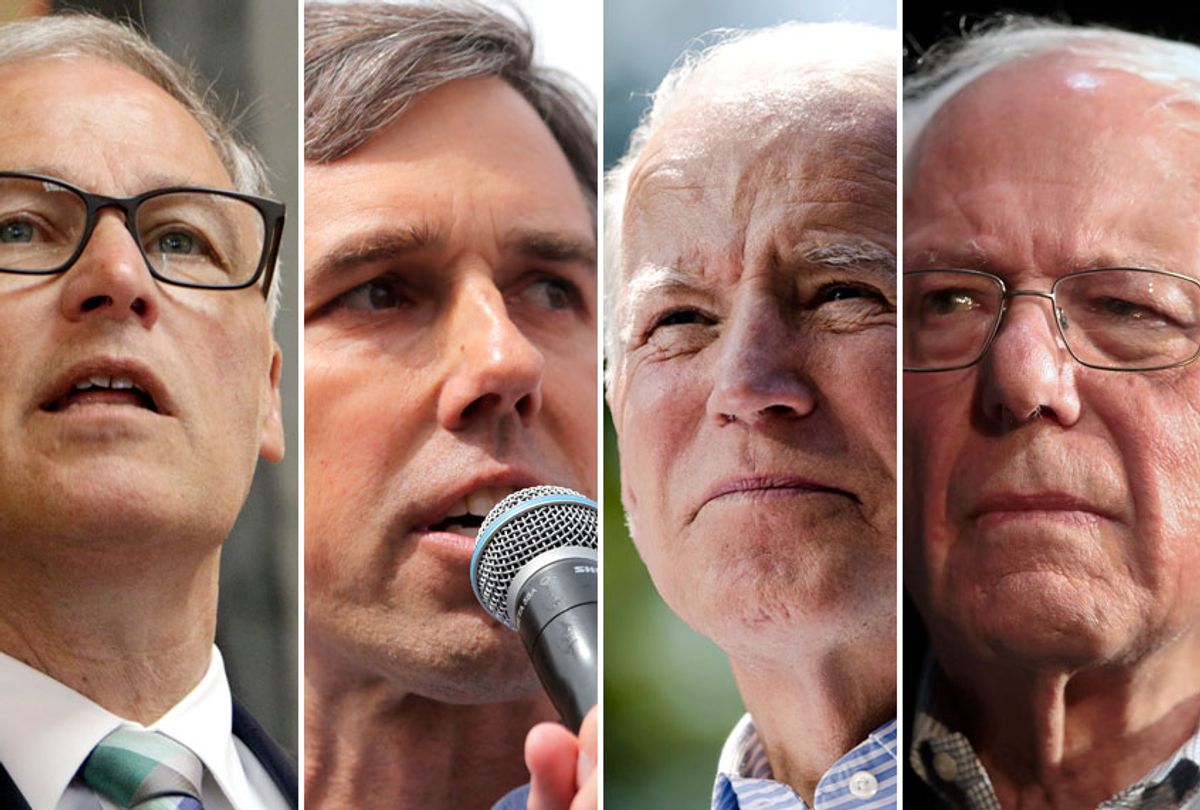 Media coverage has predictably focused on the horse race: What significance the increased salience of the issue has with primary voters, how the plans and candidates differ from each other, and whether there will or will not be a separate debate on climate. (At this writing, the Democratic National Committee still says there won't be.)

But from a climate perspective, what’s revealing (and fascinating) is the degree to which the candidates and their plans are, at heart, indistinguishable. As a group, none of these climate planks harken back to Barack Obama’s “all of the above” genuflection to the enduring political power of fossil fuels. Nor do they resemble Hillary Clinton’s 2016 proposals, which focused almost entirely on renewable power — ambitious but narrow. They eschew the carbon-pricing emphasis of many Beltway economists and policy mavens. And they avoid the austerity frame that climate deniers have for so long used to dampen public support for clean energy.

Taken as a group, this year’s presidential climate proffers are far broader — and more economically and politically sophisticated — than four years ago. If they have a 2016 antecedent, it is Bernie Sanders’ approach, which culminated in Sanders’ successful effort to buttress the Democratic platform on climate by including ambitious greenhouse emission targets.

But the Democratic candidates have also introduced some new ingredients, drawn heavily from the Green New Deal. Here’s what the emerging Democratic climate platform looks like, and why it’s important.

1. Climate science and ambitious decarbonization goals are in.

While avoiding the confusing Green New Deal language about decarbonizing the economy within a decade, almost all of the candidates commit to get the job done by mid-century. Inslee pledges net zero emissions by 2045, Biden and O’Rourke by 2050. Sanders and Warren offer no date, although Sanders in 2016 called for a 40% emission reduction by 2030.

Fundamentally, all these Democrats are saying that we can and should, decarbonize our economy fully by mid-century, and the differences in their formal pledges are almost irrelevant this far in advance.

2. Climate sacrifice and austerity are out.

None of the candidates suggest that to accomplish this goal Americans need to sacrifice prosperity or freedom — instead they all call for tying a transition to clean energy to a major revitalization of the U.S. economy, with several specifically calling out manufacturing. So striking is this pattern that the New York Times complained about it.

3. Investment, not carbon pricing, is the new silver bullet.

Carbon taxes or "cap and trade" aren’t central to the candidates’ thinking. Delaney and perhaps Hickenlooper aside, those with detailed plans all implicitly turn to a mixture of carrots — R&D, investments, incentives — and sticks, meaning regulations and only perhaps some carbon pricing, to do the job. Inslee, having campaigned unsuccessfully for a carbon tax as governor of Washington, doesn’t repeat his call for one. Biden and O’Rourke call for some kind of mandatory mechanism, but don’t specify pricing. Warren and Sanders don’t mention it. Indeed, none of the leading candidates except Pete Buttigieg explicitly favors such a tax.

The Green New Deal is the source of the single newest ingredient in the policies as a group — the emphasis on massive federal investment in place of carbon pricing. Again, the nominal size of investment varies. O’Rourke asks for $5 trillion, Warren $3 trillion and Biden $1.7 trillion. These numbers represent different program mixes and financial strategies. All a voter can truly discern from them is “I want the government to invest more in American climate progress and I think the number should be big, because the economic gains will be much bigger.” That’s a far cry from the language historically used to advocate carbon pricing.

4. Standards and regulation are back.

The idea of using emission standards as if climate were a pollution problem seems to have caught on. To begin with, all the Democratic presidential candidates support restoring Obama-era emission standards which Trump has rolled back or is trying to. Biden, Inslee, Sanders, O’Rourke and Warren explicitly call for additional regulations to get to zero emissions by 2050.

The emphasis on investment and regulations frees the candidates up to push for emissions reductions outside the electricity sectors. With those tolls the U.S. has clear pathways to 100% clean energy in three sectors of our economy: electricity generation, road and rail transportation, and buildings. Clean power is already cheaper almost everywhere than coal and natural gas; operating fleets of electric vehicles is cheaper than continuing to buy new gasoline or diesel models; and all-electric, hyper-efficient new buildings cost less to own and operate than leaky ones reliant on oil or natural gas for heating and cooling.

Allowing time for turnover of power plants, vehicles and furnaces, all three of these sectors can be profitably transitioned to 100% clean electricity — so investing in speeding up the transition here with massive federal investments does, indeed, make marvelous economic sense.

Biden and Inslee give the most detailed road maps, but the other candidates with plans seem headed in the same direction.

These presidential platforms emphasize the need for expanded clean energy research and development, along with deployment of the technologies we have already commercialized. The three sectors discussed above account for only 70% of our emissions.  pollution from the remaining 30% — industry, agriculture, aviation and shipping — requires new approaches and technologies, and significant federal support for research, development, and early stage deployment. All the Democratic candidates call for such investments, and all offer policies to ensure that along with clean energy comes a revival of American manufacturing.

How do the politics look?

The right wing and the carbon lobby seem to be teeing up their usual attack on climate advocacy: It will tank the economy and deprive Americans of economic freedom! Republican opponents of climate progress don’t seem to have realized that the Democrats, while raising their ambition on climate and clean energy, have walked away from the taxation, sacrifice and austerity traps. The right wing has attacked Biden, their current whipping boy, for offering a climate plan, suggesting that since swing voters don’t show the same level of interest in climate issues that Democrats do, Republicans will be able to play the climate austerity card against Biden — or any other Democratic nominee who dares to offer a real climate plan.

The problem with this theory is that while swing voters may not prioritize climate, they love clean energy and they want more investment  in America — and that’s what Democrats are offering. Most of the Democratic candidates, Warren and Biden in particular, are focused on reviving manufacturing, the (broken) promise that carried the Midwest for Donald Trump in 2016.

And from voices like Greenpeace, candidates are being ranked not only on their demand-side fossil fuel policies, but on where they stand on coal mining and oil and gas drilling and exploration.

The Beltway establishment is complaining about this willingness of the Democratic presidential field to place carbon pricing where it belongs — as one of a series of needed market reforms that enable us to decarbonize, but not as a fetish totem in itself. Catherine Rampel in the Washington Post lamented this feature, calling a price on carbon “the obvious, no-brainer tool for curbing carbon emissions.”  But it appears the candidates have noted the fact that when given a chance to vote on pricing carbon, even Jay Inslee’s green constituents in Washington state twice politely demurred.

In many ways, the Democratic field is following the pathway blazed by California under the governorships of Arnold Schwarzenegger and Jerry Brown. Let the public and the legislature set broad and ambitious climate goals. Then pragmatically deploy administrative rules and incentives to test and perfect pathways toward a clean energy economy. As that economy grows in strength, it will challenge and defeat the stranglehold that fossil fuel interests have held for a century over America’s future, and create the politics for a more ambitious next round of emissions reduction targets.