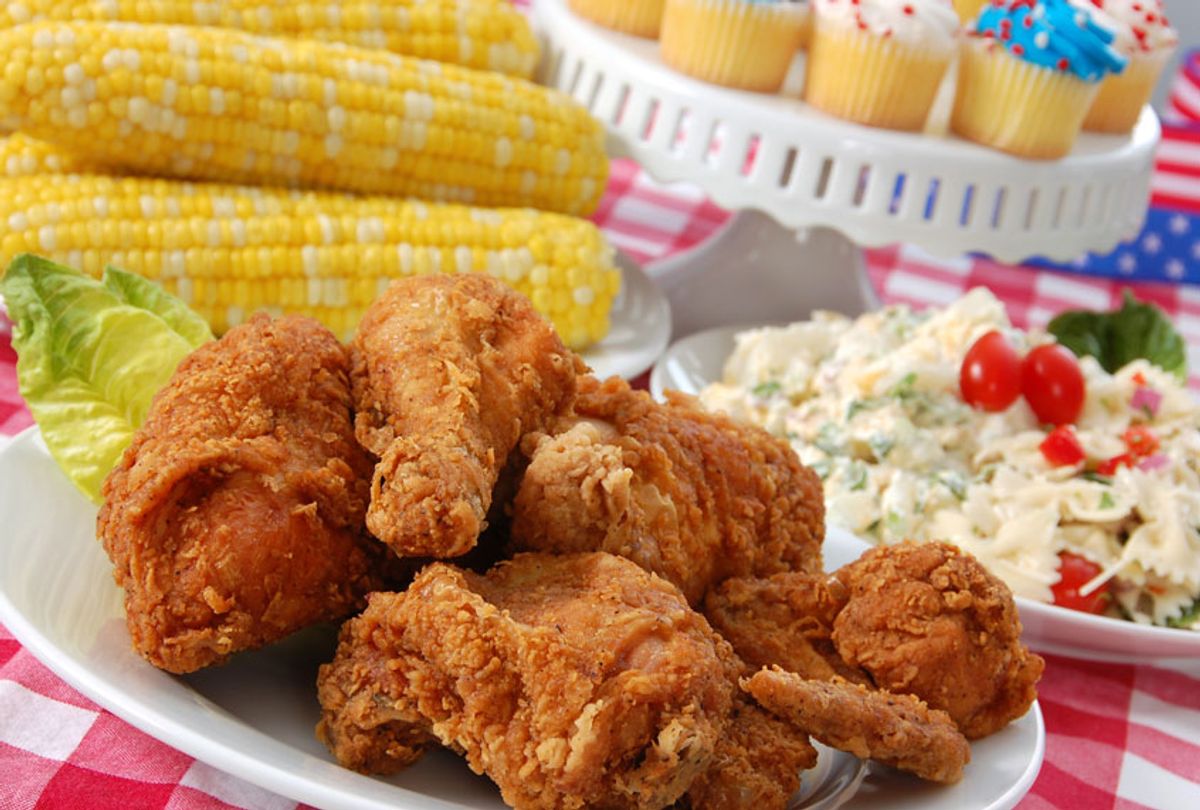 My summer cooking game was not together. By the time it is warm enough to peak most folk's enthusiasm for the grill I've lost all my ambition for mealcraft. I kill it from harvest time through the shortest, coldest days, but somewhere around Memorial Day I start counting down the weeks until I can cook with my whole heart once again.

My palate organizes itself around fleshpots. Among the stews and braises that populate my imagination are Shoyu ramen, short ribs slow-cooked in red table wine and onions, milk-braised pork butt, that sort of thing . . . oh, and lamb shank in a nutty, smokey Roghan josh. I understand the appeal of zesty side salads and playful fruit-infested salsas, that's just always been somebody else's job.

This climate-driven culinary funk reached its nadir on Father's Day some summers ago. The air was still and the dappled light was dimming in the yards behind our house. The space was alive with trampoline-addled kids and rosé-giddy adults as I fired up the Weber. The hubbub in the gardens is hidden from view by dense, decades-old foliage, but the spirit of the season should have been infectious. I was entirely immune.

Preoccupied by the sorry state of my sweat-soaked shirt, I ignored the first bed of coals as it reached its useful apex. Recovering, I reloaded the coals and went inside to change. By the time the second load of luxury lump charcoal was suitably cooked-down the neighborhood's children had gone to bed and all that was audible was the tinkle of cocktails and conversations.

When the first wave of molten fat from the steak eventually did hit the coals the flare-up was fierce. I let the fire rage long enough to toast the meat's shell and as I flipped the beef an alarmed (if theatrical) voice called out "Hello? Hello? Are you okay?"

Peevish in the swelter, I ignored the inquiry and the steak began to flare again. I stepped inside to refill my glass as the voice called out again and when I returned to the porch, even by my standards, the steak was an inferno. I jerked the steak from the grill and when the crackling flame subsided I could hear my nervous neighbor wrapping up her call with the FDNY. "Hullo?" I called out, lamely.

"Oh? you are there?" she replied, puzzled. "I saw the flame and no one answered. I've called the fire department," the neighbor explained and then offered a completely unnecessary apology. I played dumb as the sound of sirens from the firetrucks drew closer and excused myself to grant the crew access through the front door.

Moments later I ushered a pair of overheated firefighters in bunker gear — one sporting a weapons-grade fire extinguisher and the other a demolition pike — out to the back porch to provide visual confirmation that the house was not ablaze and made a silent but solemn vow to grow up just the littlest bit.

I still use the grill all the time, even in the summer, but my attitude has changed considerably. I'd like to say that I learned my lesson and how to love cooking outdoors in the summer, but what has really changed my grill game is "The Flavor Thesaurus: Pairings, Recipes and Ideas for the Creative Cook," by Niki Segnit.

Taste and flavor are not the same things. One's tongue (with some help from one's nose) can identify five tastes: saltiness, sweetness, bitterness, sourness and umami. Flavor is what results from the combination of compounds that include these five elements. All very interesting, of course, but what Segnit does next — all with the singular goal of ending her slavish devotion to cookbooks — is follow in the footsteps of wine and coffee tasters and establish 16 categories of flavor in the kitchen around which she organizes numerous subcategories and her thoughts about meal preparation. Dayenu.

Indeed, it would have been enough to make it possible to never look at a daft summer cookbook again or end the seasonal tyranny of salt and pepper and some combination of oil-and-vinegar-grade condiments for three torporous months. But Segnit takes the project one important step further and I am delighted to say single-handedly reassembled my enthusiasm for cookery during the hot months.

Just a tasters create a circular catalog of flavor, designers and decorators organize colors around a wheel, but the interaction with their subject is next level. They don't just categorize, they cross-index. For instance, when combined, complementary colors like red and green or orange and blue cancel each other out and produce something in the grayscale; constellations of monochromatic and analogous ones serve to accent one dominant color and triadic colors offer a stark contrast to one another.

Segnit takes the principles used by wine and coffee tasters who arrange their flavors in a spectrum and then adds the extra step, analyzing relationships to organize her understanding of flavors in the kitchen.

Lime and cumin have been used together in cooking since forever, it is true, but knowing that these contrasting flavors exaggerate their partner's strength. Sure, pork and apricot anytime but knowing why makes it much easier to balance the two.

And then there are the shockers: Ever give much thought to the analogous flavor of parsnip and banana? Tomato and strawberry are essentially interchangeable as they contain the same furanone, insists Segnit. She's saying go ahead, put strawberries on your burger and you might like it better. Maybe you'll be the first person you know to slice tomatoes into fruit pie. Getting curious about the how and why of flavor combinations helped me reexamine and find new uses for what I thought of as summer food.