Nowhere is safe from microplastic pollution

These tiny plastic pieces have now been detected on top of mountains, in the soil, and even in your honey. 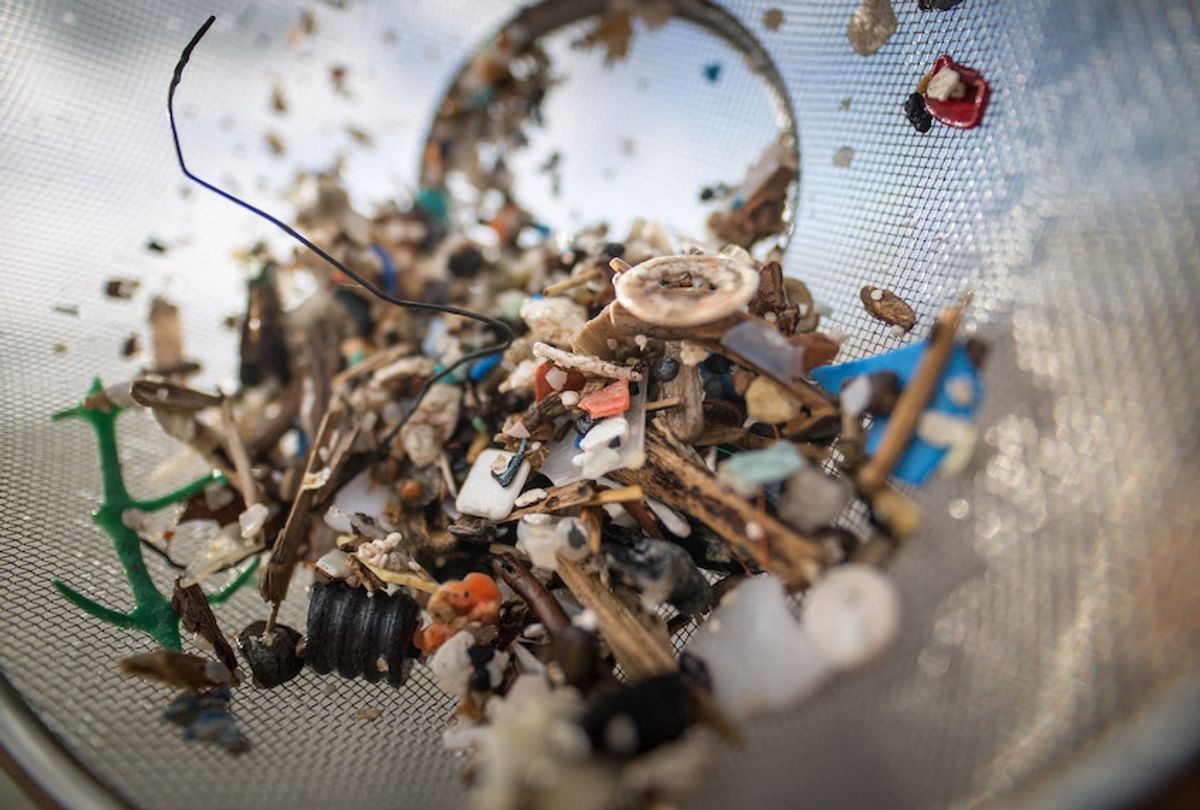 A volunteer of the NGO 'Canarias Libre de Plasticos' (Canary Islands free of plastics) carries out a collection of microplastics and mesoplastic debris to clean the Almaciga Beach, on the north coast of the Canary Island of Tenerife, on July 14, 2018. (Desiree Martin/Getty Images)
--

When I started my garden last year, I was excited to start digging into the soil at my new home, to pull weeds and plant tomatoes, cucumbers, and peppers. What I wasn’t ready for was what I found in the soil in my backyard: bits of glass, old newspapers, and plastic. Lots of plastic. I cleaned it up as well as I could but I had to wonder what I would really end up eating when I ate my ‘garden fresh’ veggies.

Since plastics became a ubiquitous part of life, they have pervasively made their way into every corner of the globe. For decades, reports of macro- and microplastic pollution in the ocean have been making headlines; pictures of strangled dolphins and sea turtles, albatrosses with stomachs full of plastic, and the infamous Pacific garbage patch that’s roughly the size of Texas have captured the public’s attention. These are memorable examples because they are easy to visualize: the fishing net, the six-pack rings, the plastic bags and water bottles floating near the beach. But arguably the worst plastic pollutants are essentially invisible. They’re called microplastics, and they’re everywhere — in the oceans, in the air, and even in your honey.

A new study in Nature Geoscience found that microplastics were present in a remote, high-altitude lake in the Pyrenees mountains (southern France), far from congested city centers that are thought to be the source for plastics pollution. The authors sampled atmospheric deposits of microplastics for five months, during both wet and dry weather. Precipitation played an important role in how much microplastic was deposited, with rain and snow dramatically increasing the amount of plastic found. Particles as small as Saharan dust (0.25 micrometers) and fibers as long as 30mm were collected. Perhaps most notably, the rate of deposition was comparable to microplastic accumulation around other major cities.

This isn’t the first time microplastics have been found in otherwise ‘pristine’ natural environments; they’ve also been found in remote lakes in Italy and Mongolia, in floodplain soils in a Swiss nature reserve, and in melting Arctic sea ice. The conclusion is clear: microplastics are being transported through the air, making them a global problem, not a regional pollutant.

The knowledge that microplastics can be aerially transported like dust or pollen and deposited in any environment all over the world has implications for freshwater systems, soil ecology, and human health.

Broadly defined as plastic pieces <5 mm in diameter (about 0.25 inches), microplastics come from a variety of sources. You may be familiar with them from an old facial scrub that’s now been banned; those tiny beads made waves when large concentrations of them were reported in the Great Lakes, prompting legislative action. Microplastics can also form when larger pieces of plastic break down. Even though plastic takes a long time to fully degrade, exposure to sun, extreme temperatures, and physical movement can accelerate the process, leaving Earth’s surface littered with tiny pollutants. While at first research focused on plastics in the oceans, studies have expanded to include freshwater systems, soils, and the air.

The knowledge that microplastics can be aerially transported like dust or pollen and deposited in any environment all over the world has implications for freshwater systems, soil ecology, and human health — to name a few. They may land in a lake, being consumed by fish or smaller organisms, or simply settling to the lake bed. They might land in a river and be carried out to the ocean, or be incorporated into drinking water. They may just land on the ground and slowly be mixed into the soil. Wherever microplastics end up, though, there are negative consequences.

Depending on the organism, the damage caused by microplastics looks different. For example, a fish consuming microplastic may end up with blocked gills, internal lacerations, and even reduced reproductive ability. An already at-risk coral near a river with high concentrations of microplastic may pick up a disease from a pathogencarried on the microplastic’s surface. Earthworms may be unable to grow as large as they should, and soil microbial communities could change entirely due to shifts in their chemical environment. Generally, organisms respond to microplastics for what they are: a foreign stressor in their environment.

Because the effects of bioaccumulation (a toxin building up as we move higher up the food chain, e.g., mercury going from fish to humans) for microplastics are still not well-understood, the effects on humans consuming them are difficult to predict. Already, microplastics have been found in mussels, fish, chickens, and honey, just to name a few. Problems from inhaling microplastics can exacerbate existing breathing problems (like asthma or COPD) and irritate the lungs.

Human health concerns with microplastics don’t stop at breathing and eating them; we should also be concerned about the soil. Introducing microplastics changes the basic physical properties of a soil — things like density, nutrient distribution, hydrological properties, and the ability to clump together — and alters its ability to provide ecosystem services, like hosting communities of microorganisms and minimizing erosion. Earthworms, which are critical for mixing up a soil and moving around nutrients, end up transporting microplastics within the soil, effectively increasing their mobility. Pathogens and other toxins (PAHs, PCBs, metals) are introduced to the soil in this way, basically creating a tiny pollution hotspot.

Removing microplastics from the environment is no easy task.

This all becomes a problem for people when those microplastics make their way into the groundwater flowing through the soil. Currently, most water treatment plants are not well-equipped to effectively remove microplastics from drinking water, resulting in another pathway for human microplastics consumption. That water can also be used for industrial or agricultural practices, spreading the microplastics over large areas and re-introducing them to soils and waterways. Removing microplastics from the environment is no easy task.

So, what can be done?

Minimizing single-use plastics and recycling everything you can (including old clothes, linens, and shoes) is a very good place to start. Facial scrubs got most of the press back when microplastics first hit the news, but other items with microplasticsinclude toothpaste, dishwasher pods, body wash, and even some make-ups (you can find a list of risky items in your country here). Microbeads are currently banned, but if you have these old products, you should be able to send them back to the manufacturer or to 5 Gyres, a research group committed to reducing microplastics.