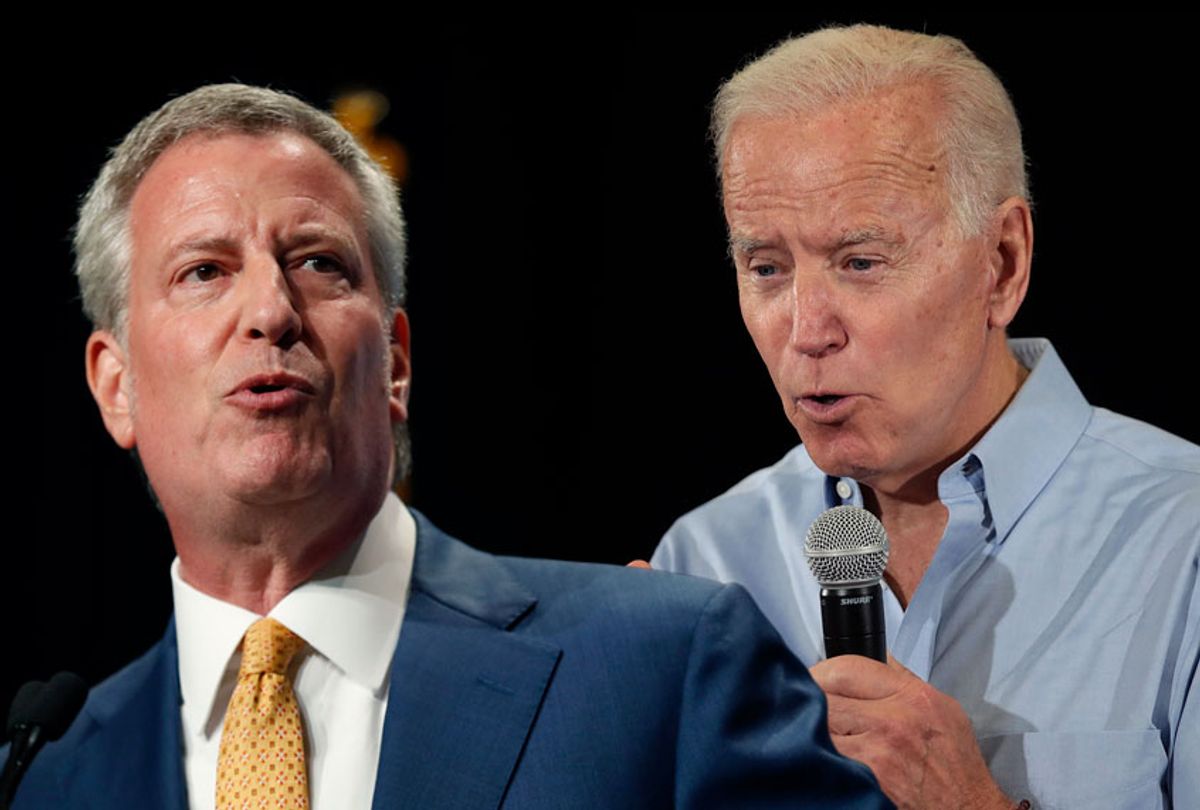 New York City Mayor Bill de Blasio denounced Democratic presidential frontrunner Joe Biden a day after the former vice president called his ability to work with a notoriously racist senator in the 1970s an example of "civility" in Congress that he says has all but disappeared.

"It's 2019 & [Joe] Biden is longing for the good old days of 'civility' typified by [Sen.] James Eastland, [D-Miss]. Eastland thought my multiracial family should be illegal & that whites were entitled to 'the pursuit of dead n*ggers,'" de Blasio tweeted Wednesday along with a picture of his wife, Chirlane McCray, who is African American, and their children, Dante and Chiara.

In a second tweet, the Democratic presidential candidate added, "It's past time for apologies or evolution from @JoeBiden. He repeatedly demonstrates that he is out of step with the values of the modern Democratic Party."

Another Democratic presidential hopeful, Sen. Cory Booker of New Jersey, also slammed Biden in a statement and called on him to apologize.

"Frankly, I'm disappointed that he hasn't issued an immediate apology for the pain his words are dredging up for so many Americans. He should," said Booker, who is black.

Biden has come under intense scrutiny for remarks he made Tuesday at a fundraiser about the late Sens. James Eastland of Mississippi and Herman Talmadge of Georgia, both Democrats who were staunchly opposed to desegregation. The former vice president recalled the "civility" of the Senate in the 1970s and '80s at a fundraiser, touting his experience working with Eastland and Talmadge.

"I was in a caucus with James O. Eastland," the former vice president said. "He never called me 'boy,' he always called me 'son.'"

Biden said Talmadge was "one of the meanest guys I ever knew" but noted he was still able to work with him.

Eastland, in addition to his opposition to racial integration, ridiculed African American soldiers during World War II and claimed the 1964 murder of three civil rights workers in Mississippi was a "publicity stunt." He was "best known nationally as a symbol of Southern resistance to racial desegregation" and described black people as belonging to an "inferior race," according to his obituary in The New York Times.

Talmadge once declared that "God advocates segregation" and boycotted the Democratic National Convention, along with a dozen other southern senators, after President Lyndon Johnson signed the Civil Rights Act of 1964.

Biden holds a commanding national lead over the Democratic primary field according to recent polls of the 2020 race, while de Blasio, the 23rd Democrat to jump into the packed primary field, has polled near the bottom. Though the mayor has struggled to stand out, he has met the Democratic National Committee's threshold required to appear on stage for the first debates next week. De Blasio won't be on stage the same night as Biden, however.

Though Biden has faced some backlash from other 2020 Democratic candidates since he entered the presidential race, he has appeared to direct most of his attacks toward Trump rather than his competitors.

The former vice president said Tuesday he believes "one of the things I'm pretty good at it is bringing people together," before citing negotiations he took part in with Mitch McConnell, R-Ky., now the Senate majority leader.

"I know the new 'New Left' tells me that I'm — this is old fashioned," he said. "Well guess what? If we can't reach a consensus in our system, what happens? It encourages and demands the abuse of power by a president. That's what it does. You have to be able to reach a consensus under our system — our constitutional system of separation of powers."