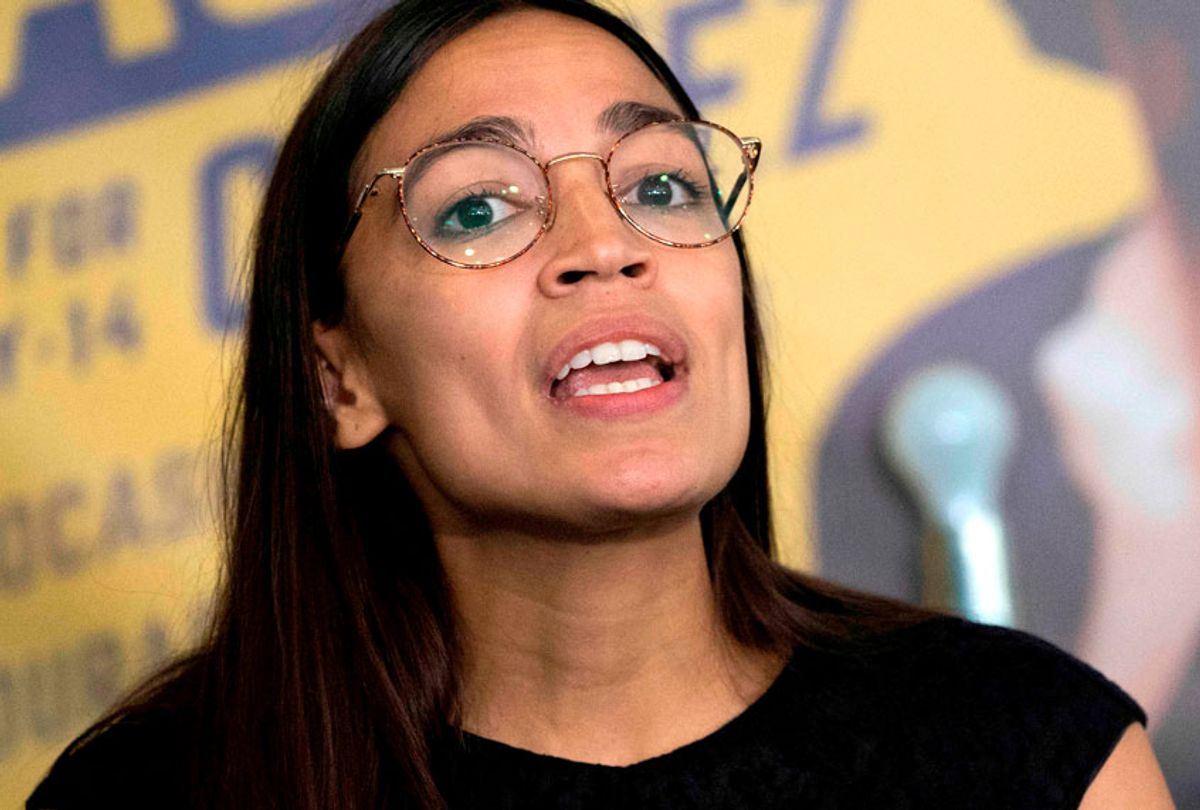 Republicans were aghast on Tuesday when Rep. Alexandria Ocasio-Cortez — who has an ability to rile up the GOP like few others — called out the moral crisis that is President Donald Trump’s ongoing widespread use of “concentration camps” to detain immigrants and asylum seekers who have crossed the southern border.

“This administration has established concentration camps on the southern border of the United States for immigrants, where they are being brutalized with dehumanizing conditions and dying,” the New York Democrat wrote on Twitter, linking to an Esquire article. “This is not hyperbole. It is the conclusion of expert analysis.”

The claim set off a firestorm, with Republicans lashing out and saying Ocasio-Cortez was spreading falsehoods and zeroing in on her use of the term “concentration camps.” Among those who lashed out at her was Rep. Liz Cheney (R-WY), the third highest-ranking member of her party in the House and daughter of former Vice President Dick Cheney:

These comments were hardly a surprise, given how Republicans have weaponized accusations of anti-Semitism against Democrats while ignoring any bigotry toward Jews or Muslims within their own ranks. But Ocasio-Cortez didn’t back down, responding:

Andrea Pitzer, a historian who has written about the pattern of concentration camps across the globe, has explained how the widespread detention of immigrants plays into this trend.

“We have what I would call a concentration camp system,” Pitzer told Esquire in the article Ocasio-Cortez had cited, “and the definition of that in my book is, mass detention of civilians without trial.”

“Things can be concentration camps without being Dachau or Auschwitz,” said Waitman Wade Beorn, a historian at the University of Virginia who specializes in Holocaust and genocide studies historian, in the same piece. “Concentration camps in general have always been designed — at the most basic level — to separate one group of people from another group. Usually, because the majority group, or the creators of the camp, deem the people they’re putting in it to be dangerous or undesirable in some way.”

That’s why when Rep. Dan Crenshaw gave an excuse for the existence of the camps, it didn’t actually rebut any of Ocasio-Cortez’s claims:

There’s always some excuse for the confinement. There’s always some reason this time is different. But like so many historical abuses, the anti-immigrant policies of this administration are founded on blatant lies: that immigrants increase crimes, that they’re bringing terrorism to the United States, that attempts to seek asylum — a legal form of immigration — constitutes an “invasion.” And the “trials” Crenshaw refers to are, in fact, extrajudicial, because they’re carried out by executive branch immigration judges, rather than the independent judicial branch.

And journalist Jonathan Katz pointed out that the glimpses we’ve seen inside the detention system paint a horrifying picture:

Photos from a Border Patrol processing center in El Paso showed people herded so tightly into cells that they had to stand on toilets to breathe. Memos surfaced by journalist Ken Klippenstein revealed that Immigration and Customs Enforcement’s failure to provide medical care was responsible for suicides and other deaths of detainees. These followed another report that showed that thousands of detainees are being brutally held in isolation cells just for being transgender or mentally ill.

Also last week, the Trump administration cut funding for classes, recreation and legal aid at detention centers holding minors — which were likened to “summer camps” by a senior ICE official last year. And there was the revelation that months after being torn from their parents’ arms, 37 children were locked in vans for up to 39 hours in the parking lot of a detention center outside Port Isabel, Texas. In the last year, at least seven migrant children have died in federal custody.

Preventing mass outrage at a system like this takes work. Certainly it helps that the news media covers these horrors intermittently rather than as snowballing proof of a racist, lawless administration. But most of all, authorities prevail when the places where people are being tortured and left to die stay hidden, misleadingly named and far from prying eyes.

There’s a name for that kind of system. They’re called concentration camps.

As I previously reported, Pitzer has warned that the situation is only likely to get worse.

“The longer a camp system stays open, the more predictable things will go wrong (contagious diseases, malnutrition, mental health issues). In addition, every significant camp system has also introduced new horrors of its own, that were unforeseen when that system was opened,” she wrote. “So, to sum up this brief sketch, the longer camps stay open, the worse they get, [especially] if they survive their existential crisis & pass a 3- or 4-year mark. I don’t see any current force in the US able & willing to close them, short of popular protest, which isn’t happening yet.”

There are still some who say that, as bad as the immigration detention might be, it’s still bad to call them “concentration camps” because it risks trivializing the Holocaust. But concentration camps originated long before the Holocaust, and the term does not apply only to the Nazi’s atrocities. And pointing out similarities between patterns of persecution, even when the scale and severity are not equal, can be enlightening.

“I’m a historian, a Jew, and an American who only exists because his grandmother escaped Nazi Germany as a teenager in the 1930s,” said Jacob Remes, a New York University professor, in response to Cheney’s comments. “I’m far more offended by my government putting people in concentration camps — as it is doing—than I am by learning from history.”