"I was critically aware of my own white male gaze," Timothy Greenfield-Sanders tells Salon 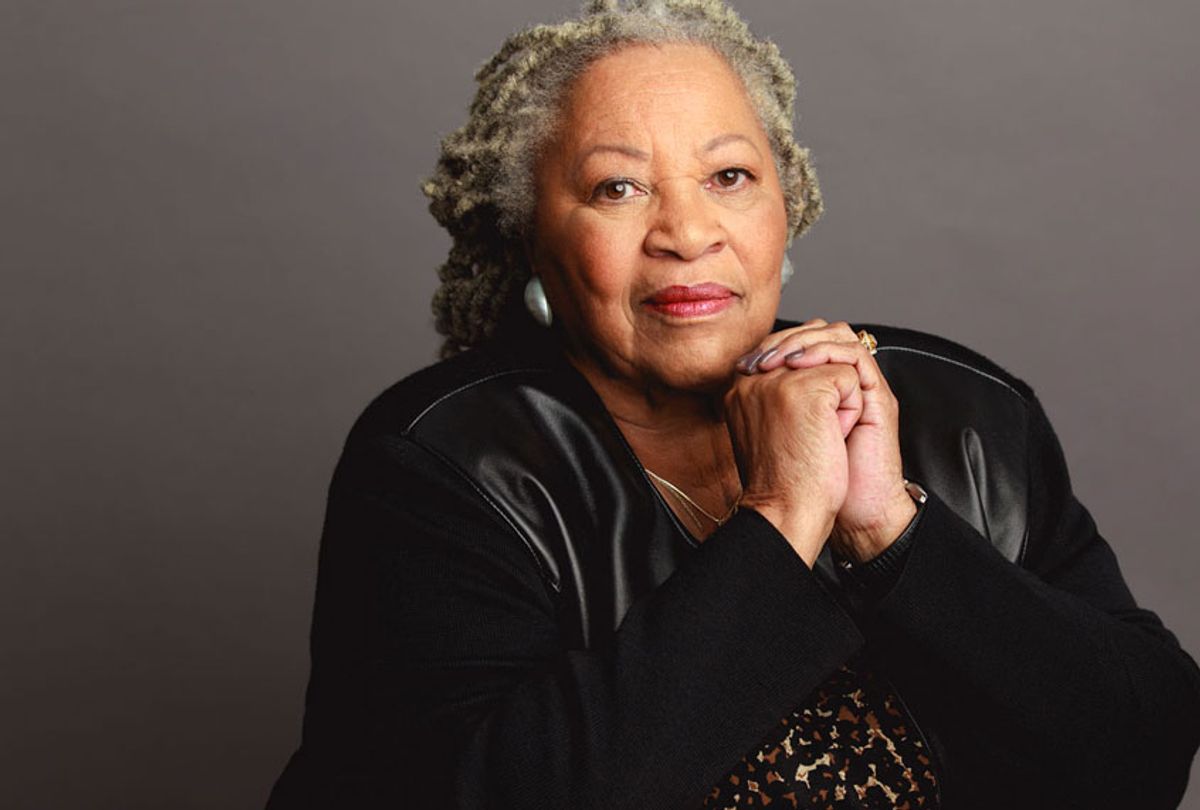 Toni Morrison, the Nobel Prize-winning writer, editor, and educator, is as formidable as any of the steely characters in her books. In the stirring new documentary, “Toni Morrison: The Pieces I Am,” filmmaker Timothy Greenfield-Sanders has Morrison talk about her life, her childhood — there is a terrific story about how she learned about the power of words — as well as her work as a writer and editor. Morrison discusses her experiences demanding equal pay for her work, creating her complex novels, and challenging white male society with her thoughts about race.

Greenfield-Sanders, who previous showcased Morrison in his 2008 documentary, “The Black List” (Volume One), illustrates this fantastic portrait of the artist, with images ranging from Morrison’s personal photographs, as well as artworks by Jacob Lawrence, Kara Walker, and Gordon Parks, among others. He also interviews Morrison’s editorial colleague Robert Gottlieb, as well as her friends and contemporaries, including poet Sonia Sanchez, professor Farah Griffin, writer Walter Mosley, critic Hilton Als, activist Angela Davis, humorist Fran Lebowitz, and of course, Oprah Winfrey, who helped adapt “Beloved” into a feature film.

The portrait that emerges here is suitably reverential. Many of the interviewees describe the power of Morrison’s writing (Oprah is particularly enthusiastic). There are discussions of strength, suffering, and resilience. Greenfield-Sanders tightly focuses on key moments: her editorial prowess and building a canon of African-American books; the publication of her first novel, “The Bluest Eye,” (which has repeatedly been banned from schools); controversies over “Beloved;” and Morrison winning the Nobel Prize in Literature. Clips from Morrison’s media appearances on “Charlie Rose,” “The Dick Cavett Show,” and elsewhere flesh out the author's thoughts and feelings, perceptions and reception.

Salon recently spoke with Greenfield-Sanders about his documentary, which screened at AFI Docs this week, and its remarkable subject.

What was the first Morrison book you read and how did it impact you?

“The Bluest Eye.” I was stunned by it. I’d never read anything like it. I met Toni in 1981, and she had three books out by then, and I read “Song of Solomon,” but not “Sula.” We started our friendship when I did her portrait in my studio in 1981 in New York.

What inspires you about Toni Morrison?

That’s an impossible question! I would start with that I’m impressed that she does so much — and all of it on such a high level. Aside from the literature and the work she’s written, her life as an editor and as a teacher. I think I work hard, but I feel I’ve never done enough. I’m dazzled by how much she has accomplished.

Angela Davis said that Morrison was quite persuasive in getting her to write her autobiography. How did you persuade Morrison to agree to make this documentary?

She did not say “no” when I asked her. I read that as a very positive sign. I think that there’s a great trust between us. I was with her the other day, and I was talking about that, and she turned to me and said, “I still trust you.” That meant a lot to me. She was the inspiration for “The Black List,” and she wrote and read the intro for “The Women’s List.” She was aware of my work as a filmmaker and photographer. I was her go-to photographer for her all these years.

There is an issue raised in the film about Morrison challenging the White Male Gaze. Yet you are a white male filmmaker. What are your thoughts — and hers, if you know them — about allowing you to tell Morrison’s story?

I think it’s the fact that I’m a white man. I was critically aware of my own white male gaze while making the film. I surrounded myself with people who could question me, and my decisions, and ideas that came up in the making of the film. I tried to bring in other voices, from Kathryn Bostic, the composer, to the artists who gave us images, and my longtime producer Tommy Walker, who started with me on “The Black List.” I think it’s a good thing that I’m questioning it and thinking: Am I looking at this right or fairly? But you have to go back to the word “trust.” She wouldn’t make a decision about a biographer of her life in film lightly.

Words have power. Morrison gives a really great example of that in the film’s first 10 minutes and there is a line in the film about the transformative power and impact of books. You are a photographer and filmmaker. Images have power for you. Can you talk about how as a visual artist, you create(d) such a powerful portrait?

Yes, I wanted to choose images that weren’t illustration as much as they were emotion. Look at this painting and get the feeling of what was being said. Kara Walker and Lorna Simpson . . . It’s a heavily researched film. We went to the Library of Congress and the National Archives, and went to Lorain, Ohio [Morrison’s birthplace], and visited Princeton, where most of Toni’s archive is. There’s a white gaze in every archive. Look at Getty, or the Library of Congress, and the material on African Americans is very limited. It was a struggle to find material, but on the other hand, some of the stuff like Toni’s manuscripts and Robert Gottlieb talking about her “structural mind” and then seeing diagrams of “Beloved” is breathtaking.

You feature Morrison in direct address. Thematically, you focus on specific periods in her life. Then you illustrate her words — and the other interviewees — with photographs, artwork, and clips. Can you discuss the approach you took to telling Morrison’s story?

I have a background in art history at Columbia, and I have been a photographer for 40 years. I thought: How do we use Jacob Lawrence’s images? When she is talking about her family’s migration to Ohio.

What I did with this film is different than any other of my films. The main subject is looking directly at camera; the other [interviewees] are looking off camera. They are taking about her, but she is talking to us. It gives you the feeling that Toni is telling her story, which I wanted it to be. Not me telling her story.

She has such elegance. You really capture that with your camera. It’s a loving portrait.

You see Toni in archival footage, and she’s so wonderfully dressed and aware of how the camera sees her. The leopard top on “Charlie Rose.” Or the bright red coat on “Bill Moyers.” I told her, “I love the leopard outfit on ‘Charlie Rose,” and she said, “Oh, I still have it!”

If you could look at the interviews, hours of Toni talking, they are mesmerizing. The film could have been 10 hours long. She is so extraordinary on camera and her voice is so beautiful. It’s very seductive. That comes through here. She reads her books for good reason.

In addition to the interviews with Morrison, your film features anecdotes and observations from a dozen of Morrison’s colleagues and contemporaries. What was your criteria about the interviews and what to discuss? For example, you touch on “Beloved,” but not the film’s reception.

I always try to think about what’s really important in the two hours I have. So, in your example of “Beloved,” and the reception of the film, I didn’t think it was relevant. It’s that Oprah wanted to do it — and did it. Toni allowed it to be made into a film. What do you decide is precious for getting across the story you want to tell?

There is a very interesting point Morrison makes when she talks about teaching creative writing. She says “invent, vs. write what you know (because you don’t know anything).” How do you process that instruction?

I loved it when she said that. It’s powerful and tough. If you go into an English class as a college kid to write about yourself, you don’t know anything yet. She did tell me that a particular person who became a writer when she was teaching at Princeton was the most fully-formed writer she ever had. I won’t say who. I probably said too much.

What do you make of the controversies about her novels being banned, her books being ghettoized, the brouhaha over “Beloved,” her lack of recognition in America until after the Nobel Prize, and even the suggestion that she won the Nobel because of political correctness? Are people really that threatened by a smart, powerful African American woman writer?

You answered the question in the question. I just got a Google alert about “The Bluest Eye” being pornographic, and that it should be banned. It’s 2019. Nothing has changed that much. I think people are afraid of powerful women, and powerful black women as well.

What did Morrison say that surprised you?

I think Toni learned that she was on her own very early age. She learned to stand up for herself. She had a certain sense of how good she was — I get the feeling, knowing her, that she didn’t question that. I have the feeling that she was confident in her art, always. She struggled for sure, but I believe that she always knew how great it was.