John Bolton, Mike Pompeo and Lindsey Graham want Trump to put "points on the board." Will his base love him for it? 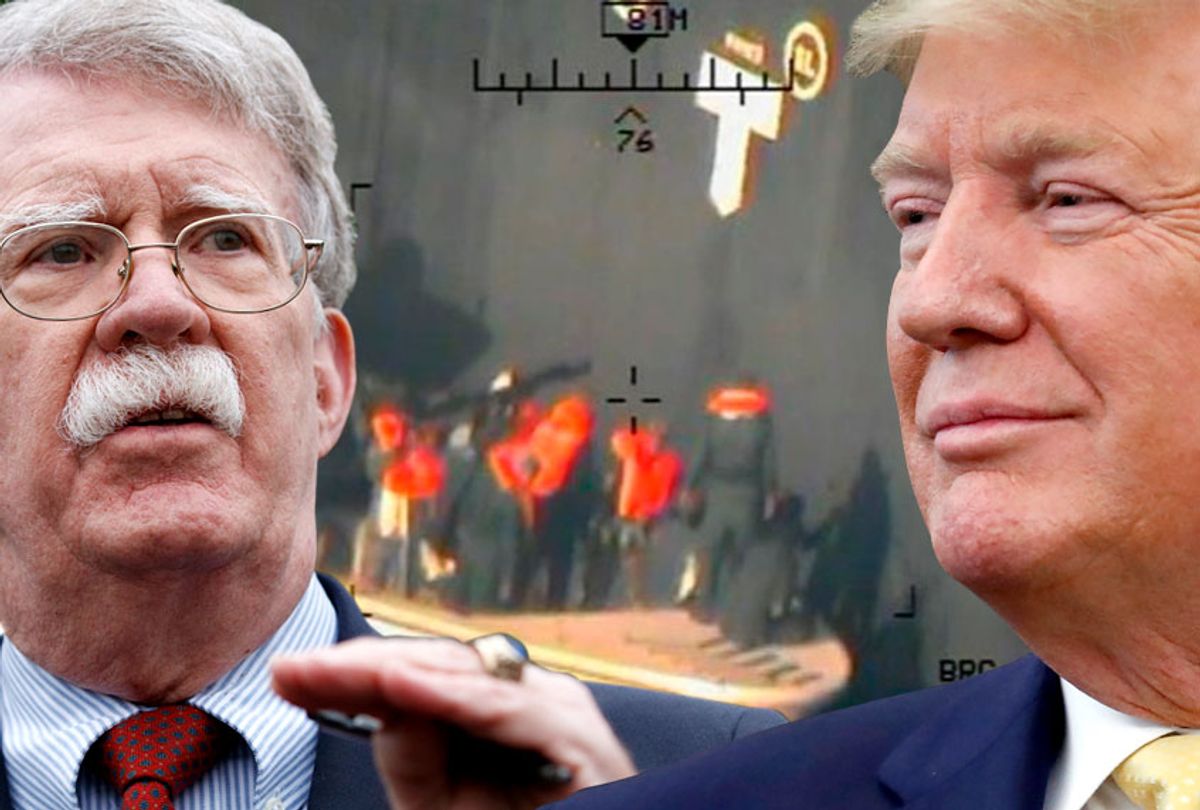 Bright and early Thursday morning,  President Trump angrily declared on Twitter: "Iran made a very big mistake!" He had obviously heard the news that Iran's Revolutionary Guards had shot down a very expensive American unmanned drone over international waters. (You know how he feels about money.) It was obviously some kind of threat but not too much later he met with Canadian Prime Minister Justin Trudeau and told the assembled press corps that he had "a feeling ... that it was a mistake made by somebody," giving the impression that he either knew this wasn't an act ordered by the top Iranian brass or was just trying to offer them a way out.

Later in the evening, this happened:

According to the New York Times, the operation was already underway with planes in the air and ships in position to fire missiles just before dawn on Friday. As of this writing nobody seems sure what prompted Trump to pull back when he did. There's no word on whether or not it was due to a change in the situation or simply another of his impulsive actions. The fact that the news media found out about it so quickly argues for the latter. People don't leak something like that unless they are shocked by what went down.

Considering Trump's behavior on Thursday, it's possible he is simply playing out some elaborate "Madman" kabuki. But I'm afraid it's even more likely that he was watching Tucker Carlson, who argued on his Fox News show that war with Iran wouldn't be popular with the Republican base. (If so: Thank you, Tucker.)

Whatever the case, we very nearly went to war on Thursday night. And yes, this is 100% Trump's fault. He and his team have been putting what they call "maximum pressure" on Iran and this is the result. Evidently, Trump thought the Iranians would immediately start sending him "beautiful letters" but they are trying a different tack.

You'll recall that during the early months of the 2016 campaign, when asked about the Iran deal, Trump told "Meet the Press" that he expected Iran to get nuclear weapons and bring on a nuclear holocaust. He nonetheless said he wouldn't violate the non-proliferation agreement because “it's very hard to say, ‘We're ripping it up.’” As the campaign unfolded he changed his mind but until he fired former national security adviser H.R. McMaster and hired John Bolton, the most fanatical anti-Iran hawk in America, he had been persuaded to stick with the nuclear deal.

When Bolton joined the team, the agreement was quickly abrogated and the inevitable escalation began. Former Defense Secretary Jim Mattis was able to keep Bolton on a short leash for a while but when fellow Iran hawk Mike Pompeo became secretary of state and Mattis resigned (to be replaced by a player to be named later) all bets were off.

Ever since, the administration has been more and more provocative, hitting Iran with crippling sanctions, designating the Islamic Revolutionary Guard a terrorist organization (against the advice of the State Department) and letting Bolton run his mouth with ever more belligerent rhetoric, daring the Iranians to respond. Meanwhile, Trump dithers, pretending that his inability to understand the situation or make a decision is actually a conscious strategy of being "unpredictable."

Trump's credibility is nonexistent around the globe so nobody believes him no matter what he says. Russia, North Korea, China and Iran are all starting to circle, flex their muscles and poke at the beast to see what it will do. And here we are.

Jacob Heilbrun, writing in the Spectator USA, points out that Trump really doesn't want war with Iran but observes that he's unknowingly assembled a war Cabinet:

If Trump stumbled into war, he would resemble Kaiser Wilhelm during World War I, who backed Austria, only to be sidelined by his generals once the conflict began. Trump would be utterly at sea in trying to preside over a war in the Persian Gulf that could easily spiral out of control. If Trump can’t even appoint a permanent defense secretary, why would anyone imagine he has the competence to conduct a war against Tehran?

It's very unclear if his war hawks are any more competent than he is. Heilbrun notes that Pompeo has even been advancing "loopy theories, reminiscent of the George W. Bush administration’s folderol on the eve of the second Gulf War, that the Iranians are in cahoots with al-Qaeda."

In response to that fatuous argument, which was clearly designed to make the post-9/11 Authorization for Use of Military Force against al-Qaida apply to these planned military strikes, the House voted to end the AUMF. (That legislation will die in the Senate, of course.)  But Pompeo should have checked with the fourth horseman of the apocalypse, Attorney General William Barr, who would have told him there's never any need for congressional authorization for military action. That's what he told President George H.W. Bush when he was contemplating launching the first Gulf War. (In Bush's defense, he didn't buy it, asked the Congress and the UN for a vote and pulled together a global coalition.)

As many of you no doubt remember, back during the crazed days after the terrorist attacks on 9/11, these arguments were flying all over the place. George W. Bush got a vote in Congress with no problem but couldn't get global buy-in because his rationale for invading Iraq was nonsensical and everyone knew it. It was well known that certain hard-right war hawks were hoping that it would be just the first step. As Paul Krugman noted at the time:

It's a matter of public record that this war with Iraq is largely the brainchild of a group of neoconservative intellectuals, who view it as a pilot project. In August a British official close to the Bush team told Newsweek: ''Everyone wants to go to Baghdad. Real men want to go to Tehran.'' In February 2003, according to Ha'aretz, an Israeli newspaper, Under Secretary of State John Bolton told Israeli officials that after defeating Iraq the United States would ''deal with'' Iran, Syria and North Korea.

Remember, allegedly reluctant warrior Donald Trump is the one who hired that guy to be his national security adviser. He also hired Pompeo. And he is almost certainly listening to his good buddy, Sen. Lindsey Graham, R-S.C., who's been advising him that he needs to get "points on the board," meaning he must use military force somewhere in order to be taken seriously. (Graham was pushing for a Venezuela invasion, but Trump has lost interest in that one, so Iran will have to do.)

I suspect that argument carries some weight. But Trump really only cares about one thing: re-election. If they want to convince him to let the bombs fly to prove he's got brass,  his hawks are going to have to convince him that his base will love it. They will, of course. They are America's most fervent supporters of military action and if Trump does it they'll love him all the more.

Shh. Don't anybody tell him about Republican voters' love of war.  His ignorance of that fact is the only thing keeping the peace.