Is Oregon paving the way for more mega-dairies?

A year after Lost Valley Farm shut down, legislators have yet to decide how to prevent a repeat 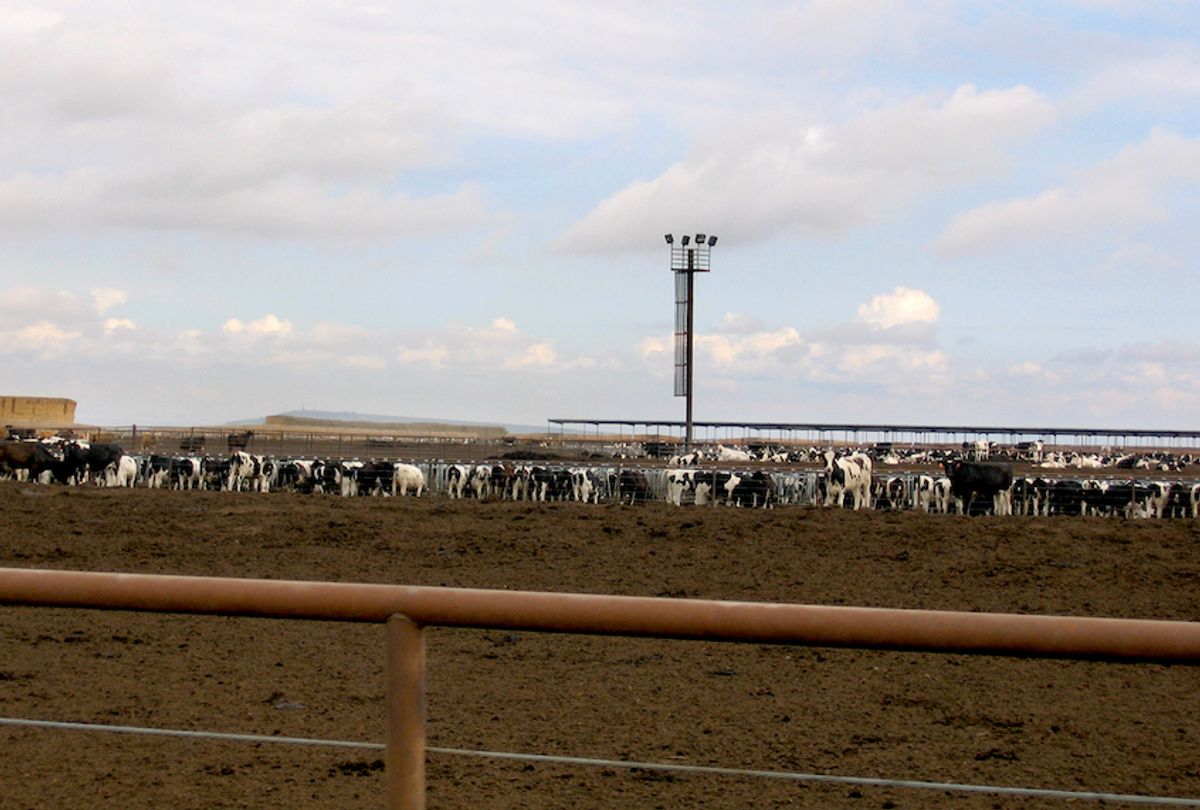 attle in drylot at Threemile Canyon Farms in Oregon. (Photo CC-licensed by Friends of Family Farmers.)
--

The vote by Oregon state senators seemed like a slam dunk.

For months in 2018, stories of an environmental disaster at the state’s second-largest mega-dairy had been all over the news. Manure lagoons overflowed. Cows stood knee-deep in muck. The dairy had racked up a growing stack of violations and a court case against an owner with drug and gambling problems. 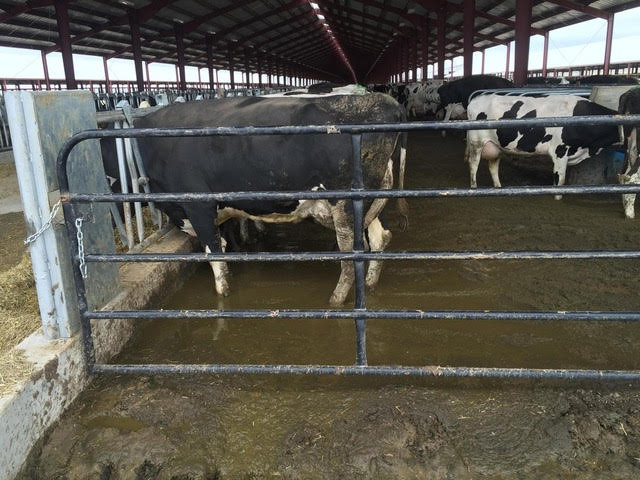 A cow standing in manure at Lost Valley. (Photo by the Oregon Department of Agriculture)

Then, last summer, the chair of the state Senate Committee on Environment and Natural Resources convened a workgroup that brought together small family farm advocates, regulators, and industry groups, in an effort to come up with a bill to prevent another mega-dairy debacle.

The resulting Senate Bill 876 was designed to require a two-step permitting process to ensure that any new dairy with 2,500 or more cows had the manure-handling infrastructure and water rights in place before being able to bring the animals on site to start milking.

“It was clear to us that we need to have a process where there’s certification that everything’s in place before the animals are brought on site because [with Lost Valley] we were dealing with a fait accompli,” said Senator Michael Dembrow, a Democrat and chair of the committee. “It seemed like a common-sense approach.” 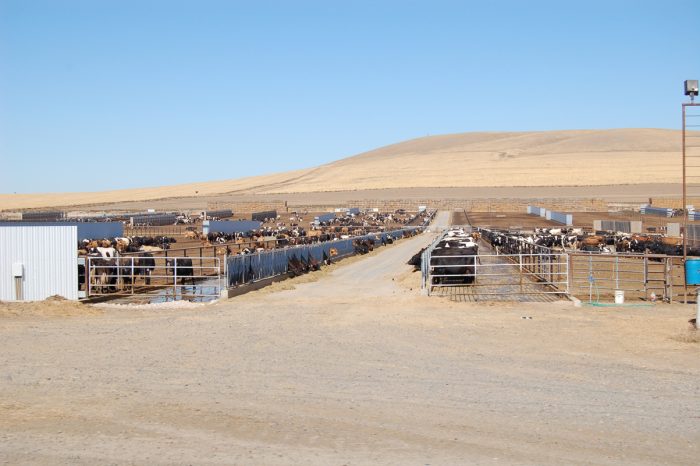 Dembrow called for a vote on the proposal in April. He expected the bill to pass the Democratic-controlled committee. But a Democrat on the committee, Senator Arnie Roblan, who represents a section of the Oregon coast that has more cows than people, killed it by voting no.

“I don’t necessarily believe that you have to keep regulating the regulators,” Roblan told Civil Eats, referring to the Oregon Department of Agriculture. “If they were to come and say we really need to have something to fix, then I would be much more inclined to say, ‘Let’s go do it.’”

Oregon has a strong tradition of small family farming, and dairies with more than 2,500 cows only account for a fraction of the operations. Furthermore, Democrats currently hold a three-fifths supermajority in the legislature. So, the failure of Senate Bill 876 highlights the uphill battle that small farm advocates face in trying to garner support for tighter regulation of mega-dairies in the state. Industry groups opposed the bill, regulators stayed neutral, and many farmers—worried that any new regulation would hurt their business at a time of persistently low milk prices—testified against it.

Opponents of the bill brushed off Lost Valley, saying it was a one-off situation with an owner with problems who was in over his head.

“We dodged a bullet,” Dembrow said. “It just seems like irresponsible lawmaking to not plan for this kind of thing happening again.”

He blamed the lead trade group, the Oregon Dairy Farmers Association, for killing the bill. “I’m really disappointed in them” Dembrow said. “They felt they had the political heft to have us not do anything, and at the end of the day they were right.”

Lost Valley Farm opened in 2017 with a permit for 30,000 cows. It began operations with 15,000 cows on-site and a contract to sell milk to the Tillamook County Creamery Association. The group, which manufactures and sells dairy products under the Tillamook brand name, has a plant nearby.

But there was a problem. The owner, Greg te Velde, was not prepared to deal with mountains of manure, and he hadn’t secured water rights. The operation needed about a million gallons of water a day, and it was located in a groundwater management area already polluted with high levels of nitrates and designated as critical because of dwindling supplies.

Emails obtained in a public records request by Friends of Family Farmers, an advocacy group based in Salem, indicate that Oregon Department of Agriculture officials were eager to approve the operation despite the outstanding issues at the farm. A memo cited by the Salem Statesman Journal shows that regulators were focused on te Velde’s promise of 150 jobs in rural Morrow County—not on the environment.

“The proposed dairy is in the best economic interests of the region,” the Oregon Department of Agriculture, Department of Environmental Quality, Water Resources Department, and governor’s office wrote in a joint memo before announcing they were giving the dairy the go-ahead in March 2017.

“[Te Velde] never even finished building his manure lagoon infrastructure,” said Ivan Maluski, policy director for Friends of Family Farmers. “He did not put in all the soil-testing monitors or the irrigation equipment that he was supposed to. That’s why in literally weeks he was breaking his permit because he did not have enough space to put his manure.”

Te Velde racked up more than 200 violations and about $200,000 in fines in a single year. The state took him to court to shut him down. It cost $200,000 to track and fight problems at Lost Valley and it took regulators a year to shut it down.

An attempt at change

Te Velde filed for bankruptcy in April 2018, and a trustee took over the farm. In February 2019, it was sold to Easterday Farms of Pasco, Washington. Owner Cody Easterday did not respond to multiple requests for comment.

A spokesperson for the Oregon Department of Agriculture told Civil Eats that its monitors did not detect contamination in the groundwater on the property. Even so, she noted that while all of the cows are off the farm, it’s still not cleaned up: The farm contained 30 million gallons of manure when it changed hands, with half of the liquid manure needing to be applied to fields along with solid manure, and many of the barns need cleaning.

The new owners need to finish the cleanup to obtain a new permit, which would go up for public comment.

Family farm and sustainable food advocates worry about a new mega-dairy moving in—there or elsewhere. In addition to Friends of Family Farmers, Food & Water Watch and the Center for Food Safety supported two other bills that were also considered by Dembrow’s committee, Senate bills 103 and 104. Those bills would have placed a moratorium on licensing new mega-dairies, designating operations with at least 2,500 cows as “industrial” and requiring them to adhere to air and water pollution regulations.

“We saw the huge loopholes in our regulatory system here in Oregon and our laws that allowed Lost Valley to happen,” said Amy van Saun, senior attorney for the Center for Food Safety. “We decided as a coalition that a moratorium is what we need to take a look at [when asking] what protections do we need to put in place before we continue to let this industry run rampant.”

Dembrow said those two bills failed to gain traction, with the Oregon Farm Bureau and Oregon Dairy Association staunchly opposed to both. But he had expected the trade groups to support the tamer proposal, Senate Bill 876.

Initially, they did support the bill but then changed their position, fearing the impact of more regulations. Every dairy farm in Oregon that has animals confined for more than four months out of the year on prepared surfaces, regardless of size, is subject to the state’s rules for confined animal feeding operations, or CAFOs. 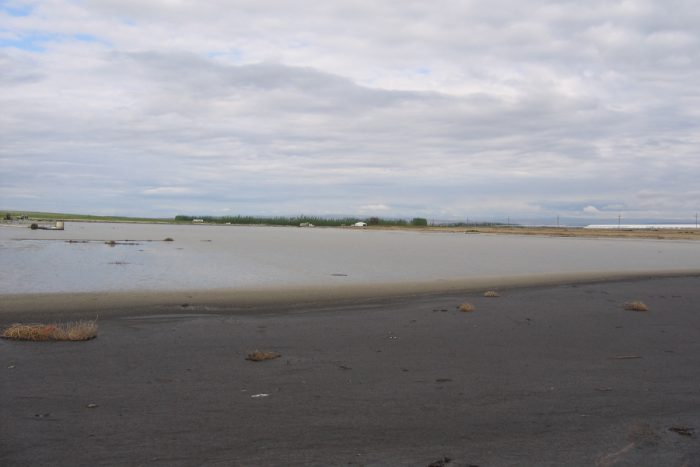 This dairy lagoon at Threemile Canyon Farms outside of Boardman, Oregon is approximately 20 acres in size. (Photo CC-licensed by Friends of Family Farmers)

Tami Kerr, executive director of the Oregon Dairy Association, said Oregon farms are already heavily regulated. “All of those regulations come with a cost, and the cost of compliance is expensive and time consuming… Milk prices right now are very low. Our farmers are struggling to stay in business.”

As in the rest of the country, Oregon dairy farms have faced consolidation in recent decades, with the number of operations shrinking as farms themselves have grown. In the early 1990s, Oregon had about 500 dairy farms. By 1998, there were 326, Kerr said. Today, they number about 206, according to Oregon Department of Agriculture statistics.

Still, mega-dairies are rare. There are 12 operations in Oregon licensed for more than 2,500 cows but two have no animals on-site and one only has heifers that aren’t milked, Kerr said. Department of Agriculture statistics show that the median dairy farm size is 270 cows.

Many of these farms are in crisis, said Maluski of Friends of Family Farmers. “The crisis is that family farms are going out of business. The trend has been going on a long time but it’s really accelerated over the last several years.”

Prices are so low right now that farmers are actually losing money on their milk, and smaller farms are being supplanted by large operations that often have the financing to weather low milk prices, Maluski said. “Industrial dairies are the last ones standing when other farms go out of business,” he added.

The biggest dairy farm in the country is also located in Eastern Oregon. Threemile Canyon Farms, with a permit for almost 100,000 cows, has nearly 30,000 on-site. The facility, which sells milk to Tillamook, has had few noncompliance citations: only three since 2007, according to Oregon Department of Agriculture records obtained by Civil Eats.

Nevertheless, environmentalists and small farm advocates don’t want to see another Threemile Canyon in Oregon. Congressman Earl Blumenauer, who represents an area of the state that includes most of Portland, says CAFOs pose an environmental threat.

“There is definitely an air quality issue and a water issue,” Blumenauer said. “It’s a serious problem in terms of the health and well-being of the community.”

The bigger the size of the operation, the harder to regulate, he said—and the more clout the company tends to wield. “Ironically, they create more problems and yet (their size) magnifies their political influence,” Blumenauer added.

Large dairy operations contribute to air pollution, emitting ammonia, methane, and other harmful compounds. And yet in Oregon, CAFOs emissions are neither monitored nor limited, despite a years-long push by environmentalists and small farm advocates for an air quality program.

The industry opposes controls, and it knows how to wield its clout. The farming sector in Oregon is a big campaign contributor, ranking sixth nationwide for political donations, according to a recent report by the Portland Oregonian/OregonLive. In the dairy industry, Threemile Canyon Farms and the Tillamook County Creamery Association are both big contributors, donating nearly $430,000 to candidates and political action committees between 2007 and 2018.

The defeat of Senate Bill 876 is a good example of the way the dairy industry wields its power, family farm advocates say. It was relatively tame, and yet the industry backed away. “It would have made some modest changes,” said van Saun of the Center for Food Safety. “But it was really kind of a Band-Aid. And even that was defeated.”

She says the state is ripe for more large operations. “Oregon’s lack of regulations on dairy emissions, lax groundwater controls, and failure of lawmakers to prevent another Lost Valley make the state a magnet for more mega-dairies,” she said.

Even so, she’s not discouraged. Lawmakers get voted out, van Saun said, and public opinion is on the side of sustainable agriculture. The hope, she added, is to get a moratorium by executive action by the governor. “It’s just a matter of getting the public’s attention and doing more grassroots support,” she said.

Just about everybody agrees that if Easterday Farms applies for a permit to set up a new mega-dairy in the Lost Valley site, the public will pay attention.

Senator Dembrow says the new operation would face “a lot of scrutiny.” Yet he worries what will happen a few years down the line, when public attention wanes. “You can imagine something like [Lost Valley] happening again,” he said.