No war with Iran, for now — but Mike Pompeo and John Bolton still really, really want one

Trump's "war hawks" have been cooking up war with Iran for at least a year. But much of their evidence is nonsense 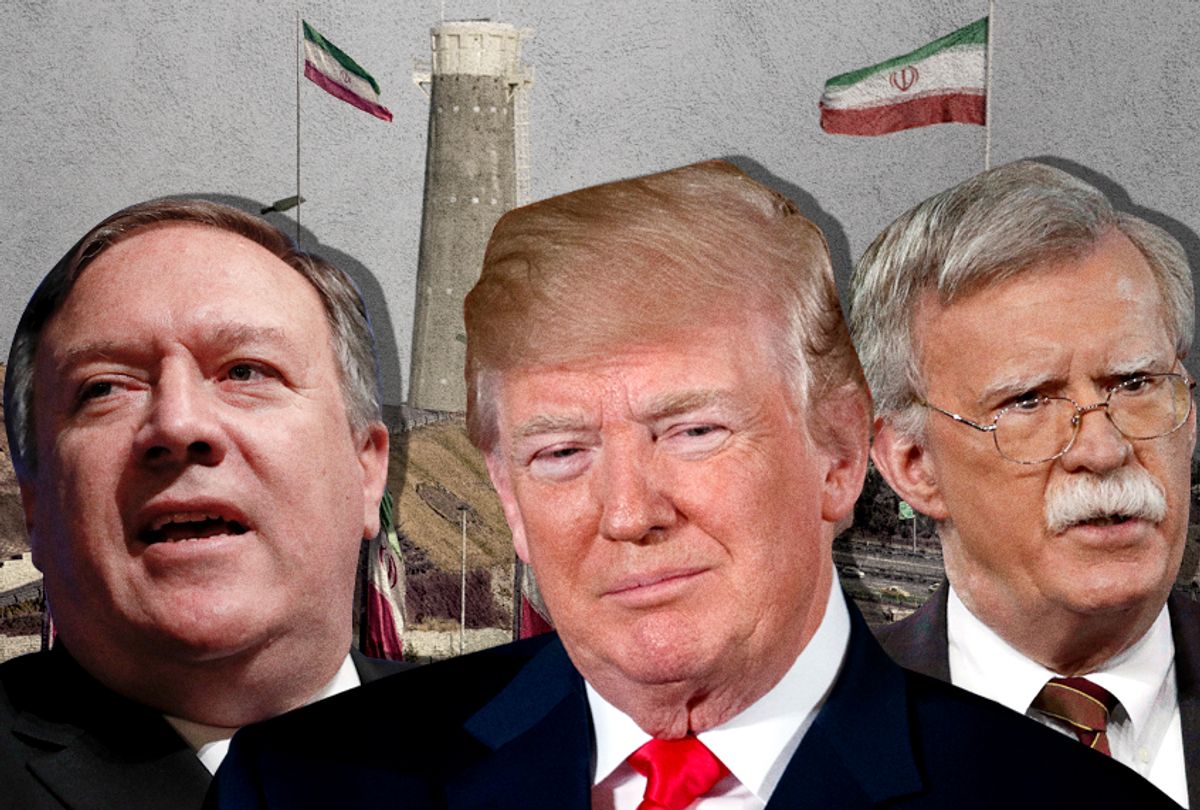 After a week of high drama in which Secretary of State Mike Pompeo indicated  the Trump administration was preparing for war with Iran, President Trump sought to end the war crisis, at least for now, by declining to retaliate against Iran over what he called “very minor” attacks.

Trump canceled a retaliatory strike on Iran in the early hours on Friday, at least in part because he was not certain that the drone or a Navy spy plane following it had not strayed into Iran’s airspace in Strait of Hormuz, according to the New York Times.

But the evident determination of Pompeo and National Security Adviser John Bolton to get Trump to carry out a military strike against Iran — combined with Trump’s “maximum pressure” strategy, which has already prompted Iranian pushback — mean that such crises are bound to continue until either war comes or U.S. policy fundamentally changes.

Pompeo and Bolton are said by Washington insiders to have personal differences, but they combined to create a virtual crisis machine, as the crisis over the June 13 mine attacks on two freighters in the Sea of Oman shows. Within a few hours after the attacks, Pompeo declared that Iran was responsible, referring to “the assessment of the U.S. government” — a term of art that has come to mean the judgment of senior administration officials, ever since the White House issued its cherry-picked intelligence summary on the August 2013 Syria chemical weapons attack.

Pompeo presented no specific evidence, instead reciting a litany of alleged Iranian attacks in May that included limpet mine attacks on four ships, a rocket that fell in the Green Zone in Baghdad and even a car bomb in Afghanistan. The latter turned out to be a reference to a Taliban suicide bomb attack on. May 29, which Pompeo insisted on "Face the Nation” that Iran had somehow “instigated.” He claimed to have “intelligence" to support that far-fetched idea, but refused to reveal anything about it.

The main exhibit that was produced to support the case Iran was responsible for the new tanker attacks revolved around a blurry surveillance video that appears to show Iranians in a boat next to the Japanese freighter Kokuka Courageous removing something from the ship’s hull. Other information appears to confirm that the object was an unexploded limpet mine. But the video evidence left key questions unanswered, and the German and Japanese foreign ministers both declared that it was not sufficient proof of Iranian responsibility.

Pompeo nevertheless implied during the next week that the administration was preparing for war with Iran over the issue.  In a closed meeting with members of the House Intelligence Committee, he argued that the post-9/11 Authorization for Use of Military Force, or AUMF, could be used to carry out a strike against Iran. Last Sunday, Pompeo said on “Face the Nation” that he and other national security officials had "briefed the president a couple of times” and that the administration was “considering a full range of options” to respond to the attacks, including the use of military force.

Someone familiar with the briefings told an unidentified diplomat at the United Nations — who was evidently in touch with the Bolton-Pompeo team and had ties to conservative media in Israel — that one of the briefings  had included a discussion of a strike against targets related to Iran's nuclear program.

But in an interview with TIME magazine published the next day, on Trump renounced the option of a military attack on Iran in response to the mine attacks on shipping. Asked whether he was considering military action against Iran, Trump responded, “I wouldn’t say that. I can’t say that at all.” He minimized the threat represented by limpet bomb attacks as “very minor” and contradicted Pompeo’s argument that an attack on ships in the vicinity of the Strait of Hormuz was a dire threat to U.S. interests.

Even after the publication of that Trump interview, however, Pompeo did not back down. He characterized the Iranian threat to shipping in the Persian Gulf region as an existential issue for the United States and the rest of the world, in remarks to the press at Central Command headquarters in Tampa that afternoon. By then it was clear that the administration would continue to speak with different voices on Iran.

Ever since taking over their preset positions, Pompeo and Bolton have been developing a strategy to draw the Trump administration into a war by claiming that Iran is bent on attacking the U.S. and its allies. A key influence on this strategy has been a still secret U.S.-Israeli agreement in December 2017 to develop a common approach to Iran, as revealed by Israeli journalist Barak Ravid.

The Bolton-Pompeo strategy began to unfold last September when they both claimed that rockets that had been fired in the vicinity of U.S. diplomatic facilities in Iraq were aimed at threatening U.S. diplomats. Bolton sought and obtained military options for retaliation against Iran if any Americans were harmed by any action of an Iranian “proxy,” and Pompeo issued a public threat to Iran to avoid any attack on U.S. “interests.”

In fact, the claimed threat was demonstrably false. The rockets in question were not launched by Iranian “proxy” militias as Pompeo suggested.  They were fired during violent protests in Basra by anti-Iran protesters who burned down the Iranian consulate as well as the offices of pro-Iranian political parties and militias. And the rocket that fell in the Green Zone of Baghdad that same night was undoubtedly launched by sympathizers with the Basra protesters in Baghdad who were protesting against corruption.

After the United States designated Iran's Islamic Revolutionary Guard Corps as a “terrorist organization” and removed all sanctions waivers for nations purchasing oil from Iran, the Iranians undoubtedly responded by moving to a higher state of military readiness. That in turn presented Bolton and Pompeo with new opportunities for generating a war crisis.

Bolton kicked off the next step with a statement on May 5, referring darkly to “troubling and escalatory indications and warnings” and threatening that “any attack on United States interests or on those of our allies will be met with unrelenting force.” He announced the dispatch of a carrier strike group and a bomber task force to the Middle East.

Those moves toward higher tensions with Iran have been based all along on nothing more than a highly convenient interpretation of Iranian moves — much of that interpretation was influenced by the Israelis. The day after Bolton’s declaration, Israeli journalist Ravid reported that a “senior Israeli official” had told him Israel had passed information to Bolton and other senior U.S. officials at a White House meeting on April 15, concerning a U.S. or allied target in the Gulf and "mentioning either Saudi Arabia or the UAE.”

On a sudden trip to Iraq on May 8, Pompeo told officials there about intelligence that Iran-backed Shiite militias were “positioning rockets hear bases housing U.S. forces,” according to a Reuters story. He ordered the withdrawal of nonessential personnel from the U.S. Embassy by helicopter, ostensibly because of concerns about a possible threat of attack.

Information on that alleged threat came from the Israelis. Senior U.S. officials in Amman, Jordan, told former Iraqi Prime Minister Ayad Allawi that Israeli intelligence had given the United States photos showing  a stockpile of Iranian missiles in Iraq. And an article published by the pro-Israel Washington Institute for Near East Policy (WINEP), co-authored by a former senior IDF official, pushed the idea that “concern” was “mounting in Iraqi, U.S. and Israeli intelligence circles” that Iran was “covertly supplying long-range artillery rockets to proxy militias inside Iraq.”

Those Iranian rockets in Iraq were neither covert nor new.  Western intelligence had reported that Iran had distributed some two dozen such rockets to Iraqi militias beginning in late spring or early summer of 2018. Iranian officials not only acknowledged their deployment to Reuters in August 2018 but explained that they were aimed at strengthening Iran’s deterrent to an attack.

Another key story line peddled by Bolton and Pompeo was about Iranians posing a new offensive threat to U.S. ships by putting missiles on relatively small boats called dhows, which was said to be a key justification for the escalation of U.S. military presence in the region. This narrative exploited the fact that U.S. had photographs of the missiles being loaded onto such boats, but it made no sense, as a specialist on missile proliferation pointed out, because Iran had land-based anti-ship missiles that were far more secure, and there was no known way of launching from the boats.

From May 5 to June 5, the atmosphere of U.S.-Iran tension continued to grow, but Trump became wary of his advisers' tone of his advisers and made it clear he wanted an end to signs of escalating conflict. crisis. On June 5, according to a former U.S. official, the Pentagon shut down the “crisis center” it had set up on May 5.  It was Trump's first significant pushback against his warhawk advisers, but evidently not his last.