Chuck Todd's terrible interview with our fabricator-in-chief snapped the tether: From here on out there's no truth 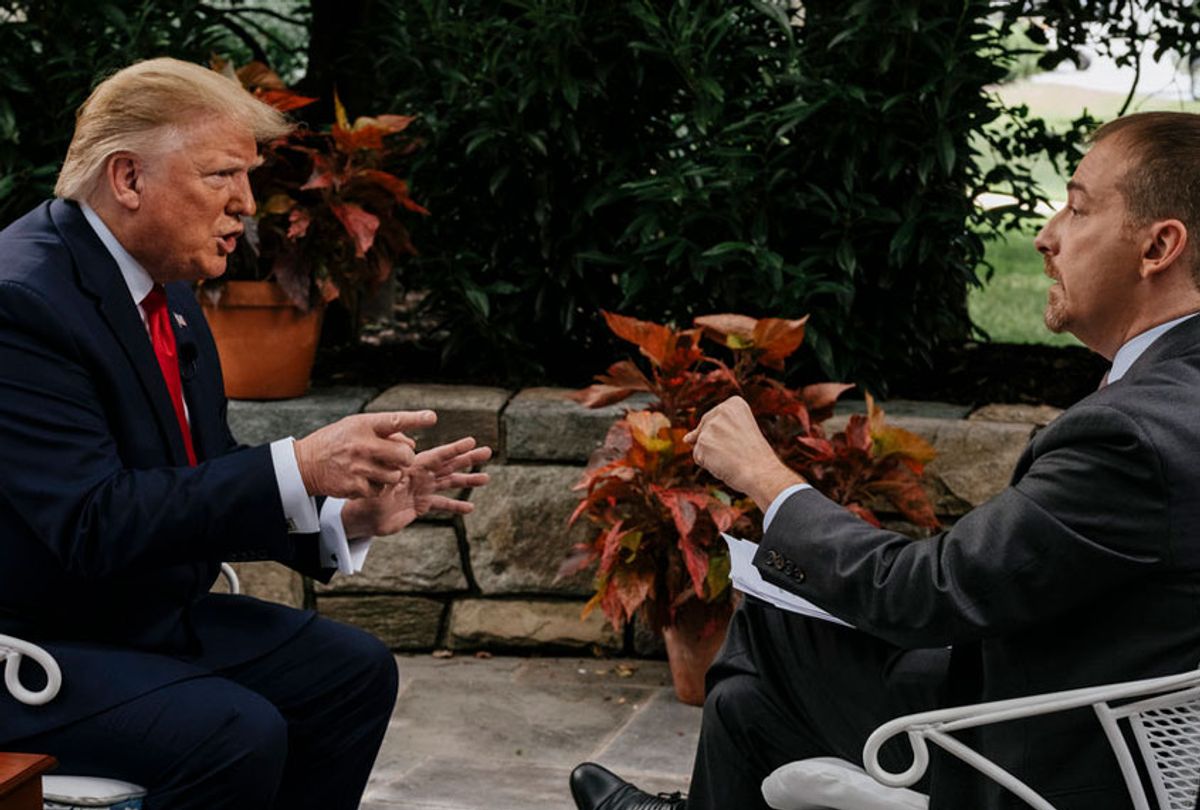 Nothing will ever be the same again. Donald Trump’s unwavering disregard for reality and his acts of violence against the truth are rapidly metastasizing into the marrow of the national debate. I'm not sure we have enough heroes in this country to successfully extricate Trumpism and toss it into the biohazard waste bin of history, along other embarrassments in America's mixed record.

The very fabric of right and wrong in America is disintegrating as one of our two major parties, with some crucial help from Russia, has convinced four out of every 10 voters that verifiable truth is nothing more than a fake news plot against them and their beloved Fifth Avenue Clampetts. As a result, half of the political debate, from the local level on up, is built exclusively on wrongness — on total nonsense, invented by Trump himself along with his propaganda cable network.

Worse yet, there are millions of Americans who will do anything to circulate Trumpism until it becomes fact and therefore the basis for governing the country from now on. In the face of all this, too many news outlets refuse to act in accordance with the challenges of this existential crisis.

To wit, the Mad King’s interview with NBC’s Chuck Todd on “Meet the Press” was another example of the perpetually nauseating confluence of Trump’s gratuitous lies and a TV news reporter too timid to treat him like the despot he is. Instead, Trump routinely steamrolls interviewers like Todd, knowing that the press will continue to behave as though he Trump were just another generic president, worthy of the same compliant, nonconfrontational attitude we witnessed during previous, comparatively “normal” administrations.

Most Trump voters who watched the interview, and indeed most Trump voters in general, land in two basic categories: those who believe everything he says, and those who accept and love his lies because his lying owns the libs. Trump voters, with zero evidence other than Trump’s worthless word, have likely accepted and repeated as truth the following whopper lies told to Todd the other day:

Todd was compliant in some cases, kinda-sorta tougher in other cases, but his overall approach further normalized and legitimized Trump, who hasn’t earned the legitimacy to participate in these kinds of familiar one-on-one presidential chats.

Let's put it this way: When Trump starts to act like a president, then maybe he’ll earn the right to be treated like one.

Until then, the broad-stroke attitude of the press ought to reflect Trump’s lack of seriousness and his nonexistent gravitas. He needs to be treated like the lying crook he is, even if it means he declines to be interviewed or storms off in the middle of them. One way or another, the message has to go out: As much bad press as Trump gets, It’s not commensurate with his despotic presidency or the malfeasance that elected him.

Despite all of his crybaby whining about “fake news” and how unfair the press is to him, Trump has more than earned his harsh criticism and embarrassing news cycles. It's hardly tough enough, given what we know and see every day. Nevertheless, Trump understands that the press is determined to cling tenaciously to the fiction of normalcy, even now, so he’s exploiting every cavernous opening to further blur our perception of the truth. He realizes that around 40 percent of the voting population will accept his bullshit without question because he’s conditioned them to believe anything other than his word is “fake news” — even their own lying eyes.

Donald Trump’s entire brand is built on fiction. He keeps telling whopper after whopper because he has to in order to reinforce his brittle ego and maintain his elaborate ruse. His wealth and deal-making prowess are just as fake as his hair and skin tone. His presidential record is either piggybacked onto the success of the previous administration (everything from the economy to VA Choice, signed by Obama) or flagrantly invented on the spot (no one’s been “tougher” on Russia).

Because of our president's firehose of lies, people I know falsely believe I support legalized infanticide. We all have family or friends who think it’s OK to lock up children in internment camps because something, something MS13. We all know people who think that a man who has told nearly 11,000 lies since his inauguration is more credible than literally everyone else — that everyone is a liar except Donald Trump.

A staggering number of Americans have rationalized a level of cruel whimsy that until now was unimaginable in the modern era, all to justify their support for this incompetent, inadequate reality-show punchline. Otherwise good people we know believe that trans women are molesters in disguise, and that cis women are baby-murdering sluts. They believe a man who confessed on tape to serial sexual assaults is our most saintly president. Your parents or your in-laws believe that the Washington Post’s front page is fiction, that the FBI is part of a deep-state coup, and that Sean Hannity is the new Cronkite.

I know way too many people who believe my health insurance should be repealed simply because they hate Barack Obama. Your uncle or your cousin or your former college roommates are bending over backwards to blurt “all lives matter,” while shrugging off the existence of boys and girls held in prison camps where thousands of them have reported being raped.

Basic morality is breaking down in defense of a politician who will be remembered as the most dishonorable, immoral president in history. And the truth is being smothered under Trump’s doughy bulk. Why? I believe millions of our fellow Americans are victims of a mass delusion brought about by the largest domestic psy-op in history, thanks to Fox News and the Republican establishment successfully employing propaganda to blur and confuse the vision of millions to the point of ludicrousness. By ludicrousness, I mean specifically the grossly counter-historical notion that America can somehow be made “great again” on the back of a national leader who behaves this poorly.

Find me an era of American peace, prosperity and “greatness,” then find me the proto-Trump in charge of it all. Good luck.

Ever since the 2016 election, I’ve been writing about ways to pull us back from the ledge. For too long, I’ve been trying to figure a way out of the hole; a way to shake us back to reality; a way to exorcise Trumpism; to force it out of the discourse for good. Today, I’m not so sure it can happen. Never say never, but it’s getting darker down here, and Democratic leaders are being pantsed too often by the White House.

I keep returning to the two-part episode of "Star Trek: The Next Generation" titled “Chain Of Command.” Trump is Gul Madred to our tortured Capt. Picard, and we’re all being told there are three lights in the room when there are clearly four. Sadly, I don’t see anyone storming into the chamber to call off our national descent into insanity. At least not yet. (Don’t ask me how I think the next election will go. My cynicism and I don’t have any positive forecasts for you today.)

The long-term impact of this madness will be devastating. Political debate from this era forward will be almost exclusively about disparate factions beating the hell out of each other on social media. Due to Trump’s further scrambling of the right/wrong, fact/fiction paradigm, participants in the political debate will be reduced to endless doxxing, lawsuits and targeted account suspensions, the only means of “winning” a political debate in the post-fact, all-lying-all-trolling era in which everyone is driven by one unifying ideology: Truth is irrelevant, and trolling the other side is the only thing.

Outflanking political opponents with a stronger command of the facts is rapidly growing impossible due to the erratic, caustic behavior of a president who sets and resets the counterfactual message every time he tweets or opens his overly articulated yapper. After all, the unofficial log-line for Trumpism is simply this: Screw the facts, antagonism is the only thing.

But no matter what he says, no matter how discouraging and awful things become, never forget the truth: There are four lights.