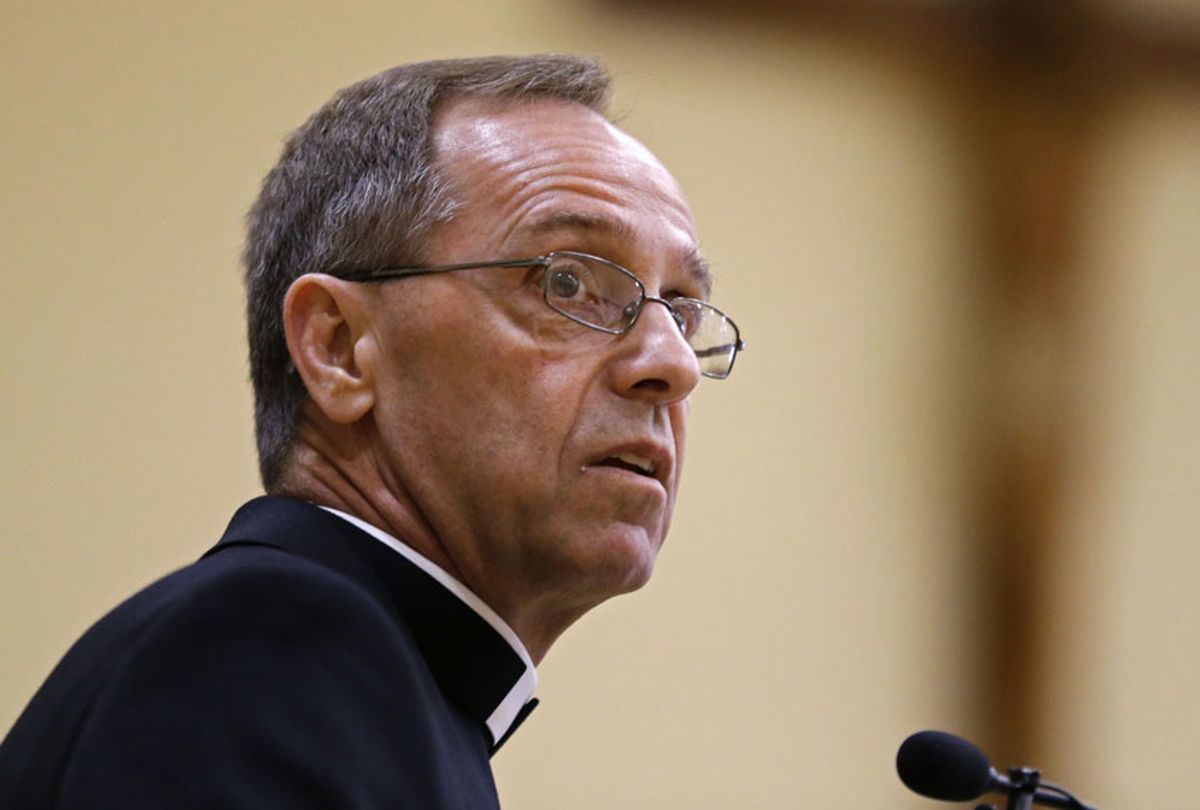 Last Sunday, Cathedral High School in Indianapolis, Ind., posted an open letter on their website addressed to the “Cathedral Family.” In it, the school’s president Rob Bridges and board chair Matt Cohoat announced the school would be terminating the employment of an openly gay teacher.

“Archbishop Thompson made it clear that Cathedral’s continued employment of a teacher in a public, same-sex marriage would result in our forfeiting our Catholic identity, due to our employment of an individual living in contradiction to Catholic teaching on marriage,” Bridges and Cohoat wrote.

This decision caught the attention of national media, especially as another Catholic school in Indianapolis, Brebeuf Jesuit Preparatory School, had severed ties with the archdiocese just days before, after refusing to fire their openly gay teachers.

The Cathedral decision is the result of a months-long deliberation process that reveals building tension between progressive Catholics — especially younger ones — and conservative church leadership, and raises questions about what Catholic communities, and politics in those communities, will look like in the coming decades.

And underpinning this is a perceptible shift in how many Catholic leaders speak about the LGBTQ community. In 2013 Pope Francis broke with his predecessor, Pope Benedict XVI, to tell reporters in Italian, “If someone is gay and he searches for the Lord and has good will, who am I to judge?”

In Indianapolis, debate kicked off in August 2018 after Shelly Fitzgerald, a guidance counselor at Roncalli Catholic High School, was fired and subsequently banned from campus after someone tracked down her marriage license and showed it to school officials; the license revealed she had been married to a woman since 2014.

Fitzgerald had worked at Roncalli for 15 years.

At the time, the Roman Catholic Archdiocese of Indianapolis — which supervises over 60 schools, including Roncalli, Cathedral and, until last week, Brebeuf — wouldn’t comment publicly on Fitzgerald. Instead, an open letter was posted on the Archdiocese website.

“As role models for students, the personal conduct of every teacher, guidance counselor and administrator and staff member, both at school and away from school, must convey and be supportive of the teachings of the Catholic Church,” it said.

And these teachings include “the belief that all persons are called to respect human sexuality and its expression in the Sacrament of Marriage between a man and a woman as a sign of God’s love and fidelity to His Church.”

Fitzgerald went on to file a discrimination complaint with the Equal Employment Opportunity Commission against the school and the Archdiocese, and is in the process of moving forward with a lawsuit.

But according to a June 23 report in the Indianapolis Star, Roncalli’s decision divided the city’s Catholic community. Many stood with the school, but a group of students formed an advocacy group called Shelly's Voice to support LGBTQ individuals who feel unaccepted by the Catholic Church.

The Cathedral decision is reinforcing that divide, while also spotlighting more liberal Catholic views and eliciting rumblings about hypocrisy, including criticisms that the Church has more important things to worry about than the sexual orientation of parish school employees, namely institution-wide sexual abuse and overwhelming leniency for predatory priests.

In a series of tweets, Jesuit priest Father James Martin — who is also the editor at large at American Magazine and one of the leading voices in shifting attitudes toward LGBTQ Catholics — poked holes in the Archdiocese of Indianapolis’ rhetoric that a teacher’s professional and private life must "convey and be supportive of Catholic Church teaching."

“But this would mean all Jews, Protestants, agnostics and atheists would be fired as well,” Martin wrote. “If you're Jewish and don't believe, e.g., in the Incarnation or Resurrection, it's hard to argue that your private life ‘conveys’ Catholic teaching.

He continued: “Because ‘Catholic teaching’ is far broader than simply its teaching on same-sex marriage or homosexuality. Catholic teaching, at heart, means believing in Jesus Christ and the Gospels.”

This is a point of hypocrisy that members of the Cathedral community pointed out as well. The hashtag #firemetoo has cropped up on Facebook and Twitter, as Catholics share aspects of their lives that aren’t necessarily in line with some church teachings. Simultaneously, a Change.org petition was started by current students and alumni asking school leadership to reconsider their decision and “to remind Cathedral’s leaders of what it means to be a Christian, especially in the Holy Cross tradition, and to lead a life like Jesus Christ, as the school officials turn their backs on His teachings.”

As of this morning, 9,000 people had signed it, posting comments like, “If you are forcing me to choose between being Catholic and being inclusive, I will choose being inclusive every time” and “Jesus stood with those on the margins and bucked the demands of institutional religion in favor of the person.”

This controversy comes at a time when Indiana as a state is grappling with the point in its identity where religion and politics intersect.

Vice President and former Indiana governor Mike Pence — who described himself during the 2016 election as a “born-again, evangelical Catholic," and has been a notable opponent of LGBTQ rights   — often describes his own conservative religious views as "Hoosier values."

That may be so. With the exception of 2008, Indiana residents have voted for Republican presidents since the 1980 election.

But things could be changing. Indiana-based presidential hopefulPete Buttigieg is both openly gay and Christian. Buttigieg himself is not Catholic — though he attended Catholic school and is mayor of South Bend, home of the very Catholic Notre Dame University — but many look to him as a possible standout candidate for the religious left, which could include progressive Catholics and even members of Indiana's evangelical community, such as the Taylor University faculty and students and alumni who voiced their outrage over Pence's appointment as commencement speaker this spring.

Groups like Faith in Indiana, a progressive interfaith organization, are attempting to rally more left-leaning religious voters. In a December 2018 piece by NPR, the organization’s engagement director Nicole Barnes said, "We wanted to be sure that, as trusted moral messengers, that we were able to lift up a counter-narrative to what was said, and lifting up the good of people.”

One issue the group advocated for was a statewide hate crime law; Indiana was one of five states that lacked one, while conservative religious groups lobbied against any new legislation.

This February, the bill passed.

That legislation — as well as the current pushback from members of Indianapolis’ Catholic community regarding the Cathedral High School decision — points to a potentially meaningful shift in the priorities of a politically and religiously conservative state. But with leaders like Archbishop Thomas and Mike Pence in their respective offices, the divide might not disappear any time soon.