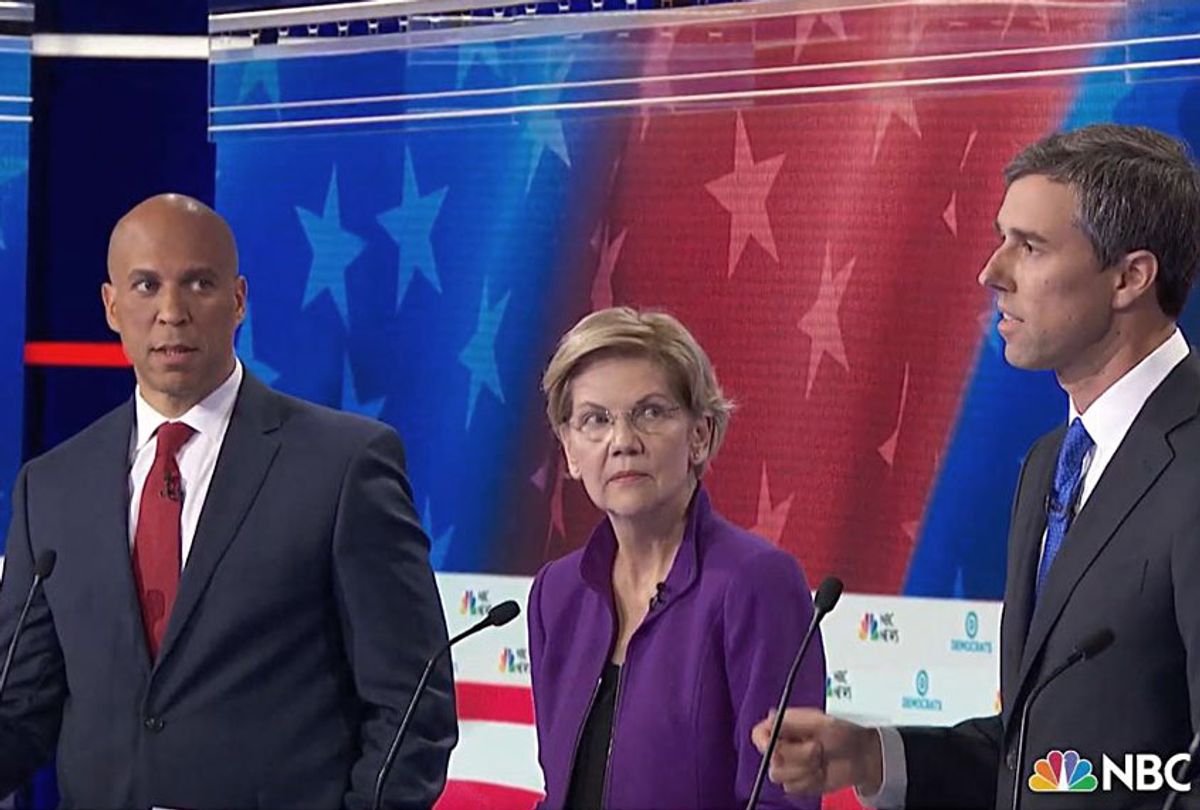 By 2020, Hispanics are expected to be the largest racial or ethnic minority group in the electorate, according to a Pew study, accounting for just over 13% of eligible voters. It makes sense that politicians will continue to try to deliberately appeal to this growing population. But those appeals can fall flat when they sound inauthentic, or trite — like “Hispandering," if you will.

Hispandering had a national moment during the last presidential campaign season when Hilary Clinton’s campaign website published a list of  “7 ways Hillary Clinton is just like your abuela,” and the numerous politicians — Tim Kaine, Michael Bloomberg, Jeb Bush — broke out their Spanish language skills in an effort to connect with Latinx voters.

That tradition continued last night during the first installment of the Democratic presidential primary debates on NBC. Things kicked off when former Texas Rep. Beto O’Rourke gave the first answer of the night, dodging a question about whether he would support a 70% top tax rate.

He began in English: “This economy has got to work for everyone, and right now we know that it isn’t. It’s going to take all of us coming together to make sure that it does.”

Then he reiterated his answer in Spanish, and it got awkward. In that moment we were gifted the first meme of the Democratic debates: New Jersey Sen. Cory Booker’s epic side-eye.

But then in a twist, Booker showcased his own serviceable Spanish later in the debate, when the topic turned to immigration policy. Perhaps his earlier side-eye was merely because O’Rourke had beat him in the Great Spanish Vocab Reveal of #DemDebate 2019?

O’Rourke and Booker’s attempts to shoehorn their Spanish into the debate seemed especially out of place as the only Latinx candidate, former HUD Secretary and San Antonio Mayor Julián Castro (who has admitted in the past that his Spanish isn’t top-rate), only delivered one line in the language: his name and his intention to run for president.

And many Latinx viewers on Twitter weren’t blindly impressed by the two hopefuls’ language skills. "If I hear one more candidate speak Spanish to hispander.... I'm gonna [lose] it," one Twitter user wrote.

NY Rep. Alexandria Ocasio-Cortez even gently ribbed the candidates during her post-debate appearance on "The Late Show with Stephen Colbert," showing how a candidate might use Spanish to deflect the fact that they weren't answering the question at hand.

"I thought it was humorous at times," she said, but also allowed that it was "a good gesture to the fact that we are a diverse country."

With the second portion of the Democratic debate tonight filled with key players like former Vice President Joe Biden, California Sen. Kamala Harris and Vermont Sen. Bernie Sanders, it will be interesting to see if the presidential hopefuls note the collective shudder in response to Booker and O’Rourke and find another way to communicate solidarity (even if more subtly, like Sen. Elizabeth Warren’s use of the gender-neutral “Latinx Americans”) or if we'll be treated to another dueling display of Duolingo skills. Keep an eye on Pete Buttigieg — he has  eight different languages to choose from.