Twitter implies that it may "quarantine" some Trump tweets 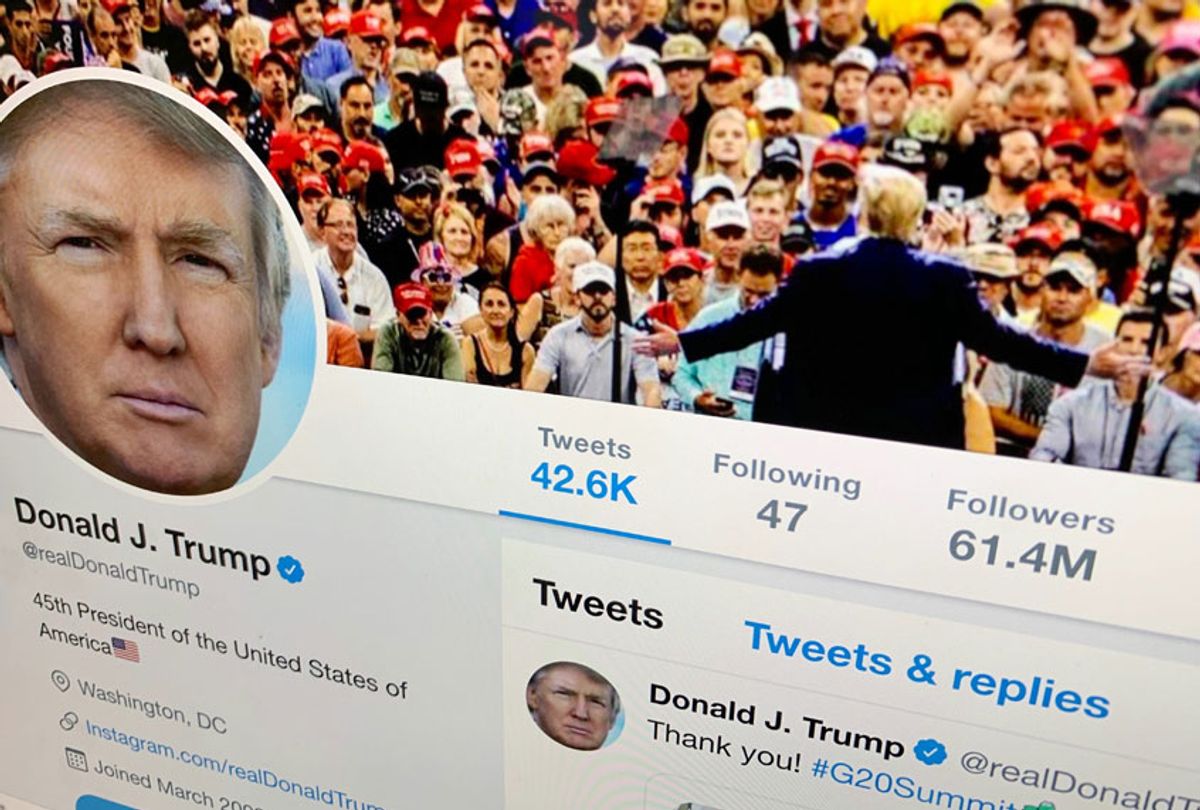 President Donald Trump has arguably mastered Twitter better than anyone in history, infamously using it as a free publicity machine that propelled him all the way to the White House. Future historians will likely mine Trump’s tweets for their insights into his psyche; indeed, Trump’s tweets often come off as impulsive and erratic, riddled with typos and insults. Sometimes his tweets have even been constituted as a threat to national security — and yet, he tweets on.

The eponymous social media giant that enabled Trump's unlikely rise has been in a compromised position when it comes to moderating the words of the most powerful politician on Earth. Twitter famously rejected the attempt by then-candidate Trump's campaign team to buy a custom emoji that depicted Hillary Clinton holding wads of cash, angering Trump's campaign staff. Lately, Twitter has been slightly more pro-active in banning some right-wing Trump acolytes who promote violence or trolling, as well as white supremacists — who sometimes are one and the same. Still, the site has been largely silent on the question of whether to censor Trump's tweets, some of which appear to violate their own policies on hate speech  or promoting violence.

That all might change soon, as on Thursday Twitter publicly announced a new policy that the company will now flag tweets from verified political leaders and candidates, who have more than 100,000 followers, but whose words break Twitter’s rules on acceptable speech.

Assuming they enforce it, that means the company's moderation team may acknowledgement that many of Trump's tweets are a danger to the public.

A user will have to click or tap to view the tweet. That fewer people will see said tweets is all but guaranteed; a much-proved tenet of online psychology states that the more clicks that it requires to view something, the fewer people who will observe it.

Twitter announced the new policy in a blog post, saying the platform’s “highest priority is to protect the health of the public conversation on Twitter, and an important part of that is ensuring our rules and how we enforce them are easy to understand.”

“In the past, we’ve allowed certain Tweets that violated our rules to remain on Twitter because they were in the public’s interest, but it wasn’t clear when and how we made those determinations,” the blog post stated. “We’ll also take steps to make sure the Tweet is not algorithmically elevated on our service, to strike the right balance between enabling free expression, fostering accountability, and reducing the potential harm caused by these Tweets."

Twitter said determining which tweets to label with be a collaborative effort and depend on a few parts of the tweet: immediacy and severity of harm, the need for the tweet to be preserved to hold the public officials accountable, whether there are other sources of information to keep the public informed, if removal would inadvertently hide context or prevent people from understanding an issue, and if the tweet provides a unique perspective that is necessary for a broader discussion.

The move is bold coming from a company that has dragged its feet to take action on Trump’s rhetoric. As recently as January 2019, CEO Jack Dorsey dismissed a question from a HuffPost journalist about how the company would handle a hypothetical tweet from Trump “asking each of his followers to murder one journalist.”

“I’m not going to talk about particulars,” Dorsey said. “We’ve established protocol, it’s transparent. It’s out there for everyone to read. We have, independent of the U.S. president, we have conversations with all governments. It’s not just limited to this one.”

Last year, during his congressional testimony, Dorsey said: “Twitter does not use political ideology to make any decisions, whether related to ranking content on our service or how we enforce our rules."

The new policy won’t be applied retroactively but could apply to future tweets. While it seems like a positive step, some fear that such a move will merely bring more attention to dangerous tweets. There is a high probability Trump's first “labeled tweet” will make the evening news.

Until then, we wait.