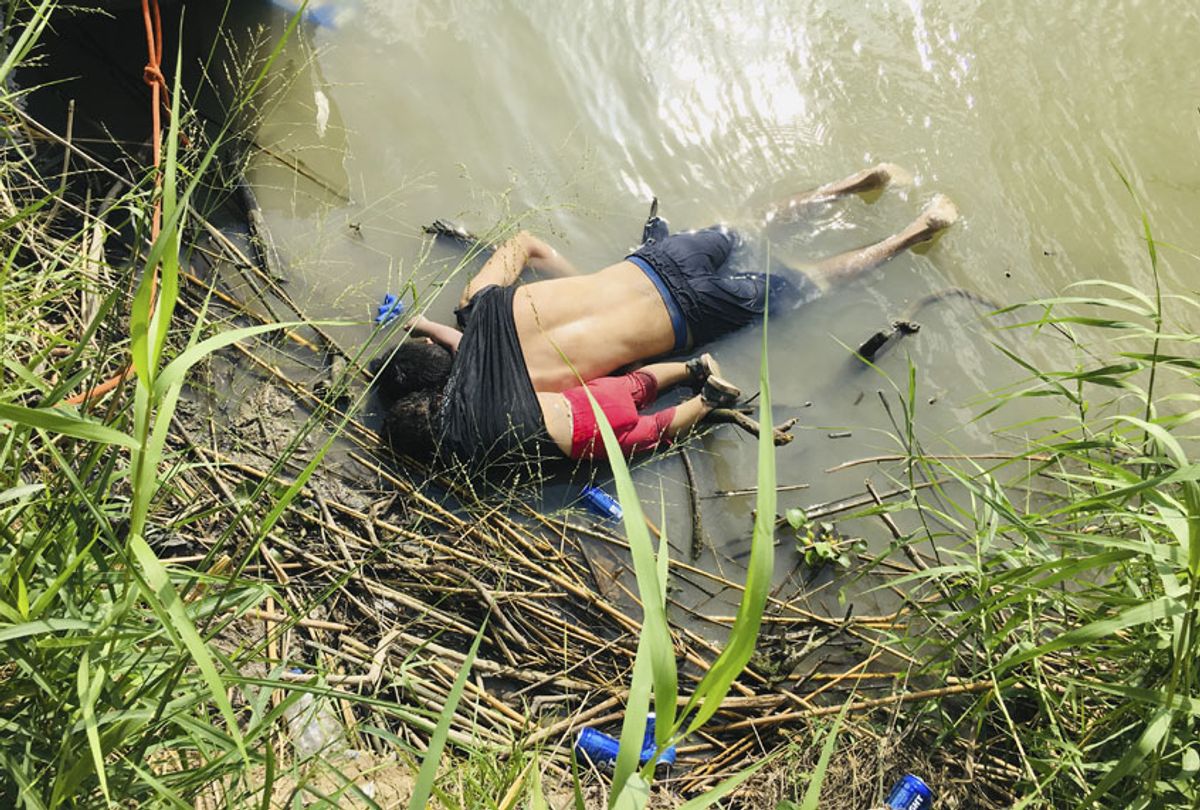 The bodies of Salvadoran migrant Oscar Alberto Martínez Ramírez and his nearly 2-year-old daughter Valeria lie on the bank of the Rio Grande in Matamoros, Mexico, Monday, June 24, 2019, after they drowned trying to cross the river to Brownsville, Texas. (AP/Julia Le Duc)
--

The presidency of Donald Trump has been one horror after another  — the endless lying, the coddling and worship of dictators, the rank incompetence and corruption of the people he has chosen to run government departments, the saber-rattling and about-facing with various enemies, the repeated attacks on voting rights and free speech and a free press, the countenancing of rank racism and white supremacy in Charlottesville and elsewhere, the personal corruption and grifting at his resorts and golf clubs, the reverence for a celebration of ignorance, the disdain for science and expertise, the constant tweeting and spewing of hate and stupidity and racism and misogyny and xenophobia  — the list goes on. Add your own outrages at will.

But an elemental corner was turned for me this week by a beautiful thing that happened on Tuesday evening. A friend of mine announced on Facebook that he was offering to take in a migrant family seeking asylum. “I am willing to sponsor and provide lodging and food to any migrant family of 4 at my house,” he wrote. “I will make sure that they are not of any nuisance to the community. I will teach them English to assimilate and make sure that they are in compliance with any asylum rule and regulation. I am sure that there are countless other Americans willing to do the same.”

His name is Peter Vu. He was born in Vietnam, part of a family that were refugees from that country in 1975. He is a graduate of West Point. He lives in New Jersey. He is a successful businessman. He is unmarried and lives alone and has extra room in his home.

And within a few moments of posting his offer on Facebook, he was attacked with snarky disdain by a Trump supporter.

Keep in mind that this was no ordinary week that my friend decided he would offer shelter to a migrant family. This was the week we discovered that hundreds of children who had been separated from their family members or parents were being housed in inadequate conditions a Border Patrol facility in Clint, Texas. “The conditions the lawyers found were shocking,” The New Yorker reported. “Flu and lice outbreaks were going untreated, and children were filthy, sleeping on cold floors, and taking care of one another because of the lack of attention from guards. Some of them had been in the facility for weeks.”

“[The children] were filthy dirty,” said one of the lawyers who visited the Border Patrol facility. “There was mucus on their shirts, the shirts were dirty. We saw breast milk on the shirts. There was food on the shirts, and the pants as well. They told us that they were hungry. They told us that some of them had not showered or had not showered until the day or two days before we arrived. Many of them described that they only brushed their teeth once. This facility knew last week that we were coming. The government knew three weeks ago that we were coming.”

This was the week that The New York Times ran a photograph on its front page of  Óscar Alberto Martínez Ramírez, a Salvadoran migrant and his 23-month-old daughter who had drowned in the Rio Grande River near Brownsville, Texas, trying to reach the United States. They lay side by side face down on the muddy riverbank, our own tableau of innocent death alongside the photo of the dead Syrian boy lying in the surf on a Turkish beach in the Mediterranean Sea, drowned while trying to reach the Greek island of Kos.

This was the week that three children, including two babies, and a woman were found dead near the Rio Grande River in south Texas, apparently overcome by the heat, according to the Washington Post.

This was the week that we learned that a lawyer from the Department of Justice argued in a case before the Court of Appeals for the Ninth Circuit that the federal government, in providing so-called “safe and sanitary” conditions for migrant children being detained, is not necessarily required to provide them with toothbrushes, soap, or even beds.

This was the week that President Trump fired the acting commissioner of Customs and Border Protection and appointed in his place a man by the name of Mark Morgan, a former Fox News contributor and advocate of Trump’s “tough” policy on the border, who made racist comments about migrant children to Tucker Carlson on his show back in January. This followed an all-out purge of the leadership of every single agency involved in immigration or border protection, leaving all of the agencies from Homeland Security on down with acting leaders who have not been confirmed by the Senate.

This was the week that a “controversy” continued over what to call the facilities where the United States government is housing migrant children who have been separated from their parents in filthy, disgusting, unsafe and unhealthy conditions. Last week, Representative Alexandria Ocasio-Cortez called the detention facilities run by the Trump administration “concentration camps” and was immediately attacked by Republicans like Representative Liz Cheney of Wyoming for making light of the Holocaust.

And this was the week that we learned the government is spending $775 per child per day to house migrant children in the temporary tent camps it is running along the border and in southern Florida.

We’ve crossed a line when Peter Vu’s offer of shelter to a migrant family becomes just another object of right-wing Trumpish fury, something to be attacked and belittled, rather than something to celebrate and be thankful for.

I’ve spent my entire life trying to figure out how the entire nation of Germany, all of its ordinary citizens living in cities and towns and villages across the country, could have stood by while their own government rounded up people and stuck them in hastily built, disgusting concentration camps, and then proceeded to kill them by gas or bullets or starvation or overwork or disease or simple filth and neglect.

This was the week I think I finally understood it. What happened in Nazi Germany didn’t affect their own lives, it happened away from them, it happened to “others,” to people who were not like them, whom they had been conditioned to hate, and it happened at the direction of a leader they admired and revered. And it happened with the overt or tacit approval of their fellow citizens all around them.

“There are some other stories that we’ve heard from the children, such as that one of the guards has an older child, who’s seventeen, serve as the unofficial guard inside the room. So he tells the kids what to do, and he tries to keep the room neat and straighten up the mattresses and everything. Now, the guards reward him with extra food, and when a seven-year-old saw that this older boy was getting extra food by being helpful, he asked if he could help clean up the room and keep it neat so that he, too, could get extra food. And the seventeen-year-old chastised him for this, and then when an older sibling tried to stand up for his little brother, the guard intervened and reprimanded both the little boy and his older brother.”

There is a word for this: Kapo. It’s the German word for a prisoner in a Nazi concentration camp picked by guards to watch over other prisoners. Kapos were spared from hard labor and given extra food and blankets and privileges, but if they failed to supervise their fellow concentration camp victims to the guards’ satisfaction, they were reprimanded and returned to the regular camp population.

There it is in black and white, a description of behavior caused and sanctioned by our government that is almost exactly the same as what happened in Nazi Germany. Are we running concentration camps? You damn right we are. Are we killing people? No, but they are dying along our southern border from exposure, from disease, and they’re dying inside our own detention facilities, run by officers of our federal government.

I have been skeptical until now of people who have compared Donald Trump with Adolph Hitler. I’ve scoffed at speculation that Trump will refuse to leave office if he loses the election in November of 2020.

No longer. This was the week that we crossed the line. Things are being done to children in our name that should shame us all. That there is a significant portion of this country, such as the Trump supporter who denigrated and belittled Peter Vu for his proffer of kindness to migrants should give us more than pause. It should scare the shit out of us.

It can happen here. It is happening.