We probed Santorini’s volcano with sound 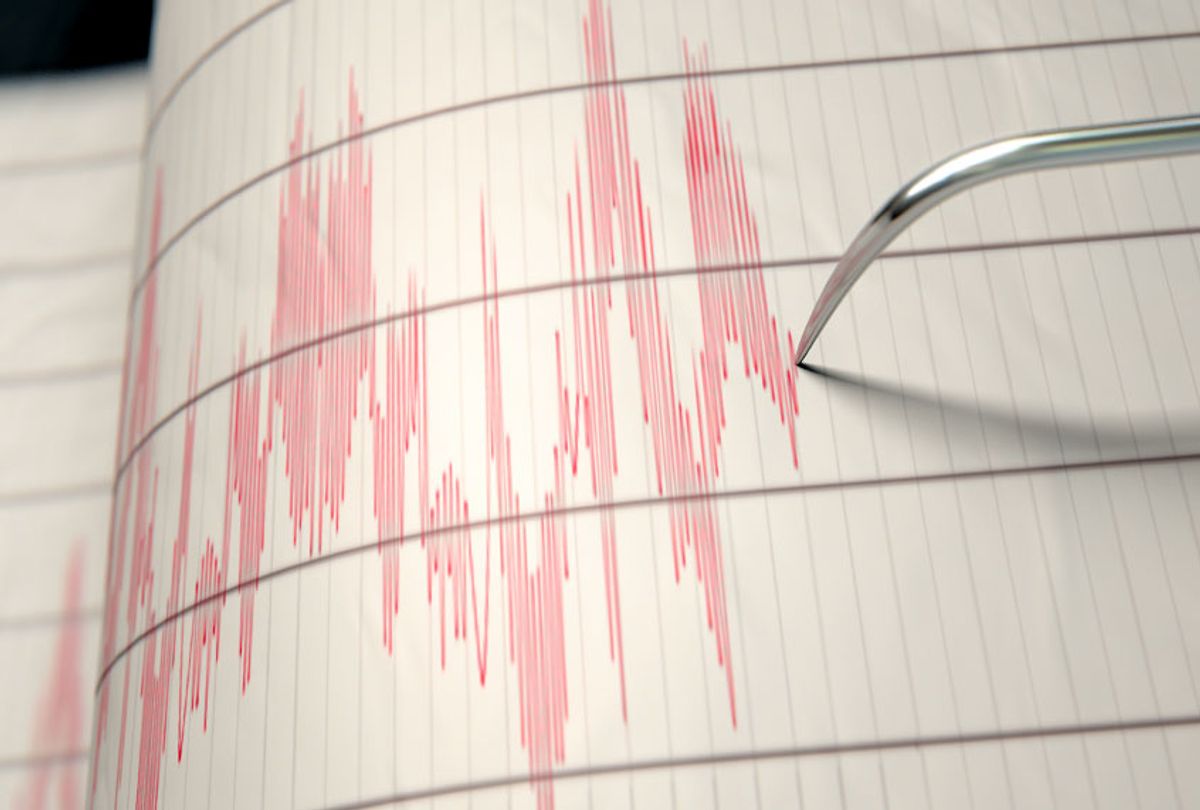 The island of Santorini in the Mediterranean has attracted people for millennia. Today, it feels magical to watch the sun set from cliffs over the deep bay, surrounded by cobalt blue churches and whitewashed houses. This mystical place attracts about 2 million tourists per year, making it one of the top destinations in Greece.

Not all those visitors recognize that Santorini is an active volcano. In 1630 B.C., the volcano exploded and collapsed leaving behind an almost circular hole. This is the caldera — visible today as a bay filled with seawater and lined by cliffs. The large explosion covered a Bronze Age town, burying buildings in volcanic ash two stories deep.

The latest lava flows erupted in 1950 and expanded the islands that have grown at the center of the caldera. Recently, in 2011-2012, the volcano went through a period of unrest. The ground bulged up and out, and many small earthquakes occurred. Scientists concluded that a small amount of magma was injected about 2.5 miles (4 kilometers) under the northern portion of the caldera.

What attracted me to this iconic place is that most of the volcano is submerged under water. I am a geophysicist interested in how magma moves deep in the Earth. Over the past decade, I’ve been using advanced technology to improve how we “see” magma’s otherwise hidden pathways below volcanoes around the world.

Using sound to see what’s beneath the surface

In the 1780s, French scientist Ferdinand Fouquet traveled to Santorini to view an ongoing eruption. He was the first to realize how the volcanic surface depression known as a caldera was formed. As magma emptied out of its underground reservoir during the eruption, the roof of rock that had been covering it collapsed. The flanks of the volcano that remained form the ring of islands visible above water today.

My research project aimed to delve deeper, literally, than what we can see from the surface to figure out what’s going on within this still active volcano. A blanket of water over everything except the very top of the Santorini volcano meant I could use deep-penetrating marine sound sources to “illuminate” the subsurface structures. My international collaborators and I wanted to find the location and depth where magma was collecting and how much magma there is right now.

We conducted our work from the R/V Marcus Langseth, an American marine seismic ship. It is the only academic ship with a sound source capable of imaging the deep insides of a volcano. This technology is controversial because of the potential impact of loud sounds on marine wildlife and its intensive use by oil exploration companies.

We spent months doing environmental permitting and finding the optimal design for the experiment. The ship carried a team of experienced biological observers who surveyed the sea both above and below water for sound-sensitive or endangered species. If any were observed at a distance, we were to follow a prescribed set of actions to ensure they wouldn’t be disturbed. After all this preparation, though, we saw almost no wildlife during the expedition.

Our “active source seismic imaging” method is like making a CAT-scan picture of the inside of the Earth. Instead of building an image using X-rays, though, we use sound waves generated by 36 heavy, metal canisters — called airguns — that are towed deep in the water behind the ship. When the airguns open, compressed air pushes on the seawater, creating a sound wave that travels through the Earth.

In this instance, the sound travels through the rocks beneath the volcano. Then seismic sensors resting on the seafloor on the other side of the volcano record when the sound reaches them. The team installed 65 of these stations on land, across Santorini and the nearby islands, and dropped another 90 stations to the seafloor.

We have to use very accurate timing to measure how long it takes the sound energy to go through the different parts of the volcano. The energy from the sound source will travel more slowly through rocks that are broken or that are hot and contain magma. When we probe the structure from many different directions and at many different depths, we can recover a detailed picture of the interior of the Earth.

To get the data back from the seafloor, we send a special sound signal to the sensor — like a bird call — that commands the instrument to drop its anchor. Then everyone scans the sea looking for the instrument. During the day we search for a cheerful orange flag, at night a strobe light makes this task easier. Our ship maneuvers alongside the instrument and a crew member leans over the side, hooks the instrument on a long pole and pulls it back on board. The data is in hand.

Filling out the subsurface picture

Analysis of the seismic data is an enormous task. It required experienced inspection by Ph.D. student Ben Heath and master’s student Brennah McVey. We then used seismic tomography to make the first detailed “photographs” of Santorini’s subsurface structure. The term tomography comes from the Greek words “tomos” for slice and “graphos” for draw. Basically sophisticated computer code makes a three-dimensional digital model of the object of interest based on the speed sound waves traveled through it.

Surprisingly, we found a narrow zone of collapsed rock hiding within the broad caldera at Santorini. Geological studies of the eruptions at Santorini hadn’t led us to expect there would be a confined volume of rocks in the northern part of the caldera that sound traveled through more slowly. Rather we thought the entire caldera would be filled with this type of broken rock at shallow depths. Our finding meant that the collapsed portion of the caldera was much narrower and deeper than it appears from the surface.

This column of disrupted rock is less than 2 miles (3 km) across — small compared to the size of the 6-mile-wide (10 km) caldera. The structure goes down into the ground 2 miles (3 km) below the bottom of the bay. These rocks must contain lots of water-filled gaps to have sufficiently slowed the seismic energy we recorded.

To figure out how this unique volume of disrupted rock formed, we drew on existing knowledge of Santorini’s most recent large explosion, the Late Bronze Age eruption in 1630 B.C. As magma erupted from the subsurface, it caused the overlying rocks to break up. At the same time, underground explosions fractured the rocks when magma and water came into contact. Then, above this collapsing column, the seafloor depression filled with porous volcanic deposits from the eruption itself. Finally, the entire bay dropped down and rapid flooding formed a tsunami wave.

What is particularly interesting about our findings is that magma continues to accumulate directly beneath the column of disrupted rock — thousands of years after the explosion that originally created the caldera. My colleagues and I think the rising magma comes to a halt beneath the reduced weight of the broken rock in the collapsed column.

Our research helps explain how magma systems are reset and regrow after major volcanic episodes.