Showtime's Roger Ailes docudrama is made to win awards, not hearts and minds 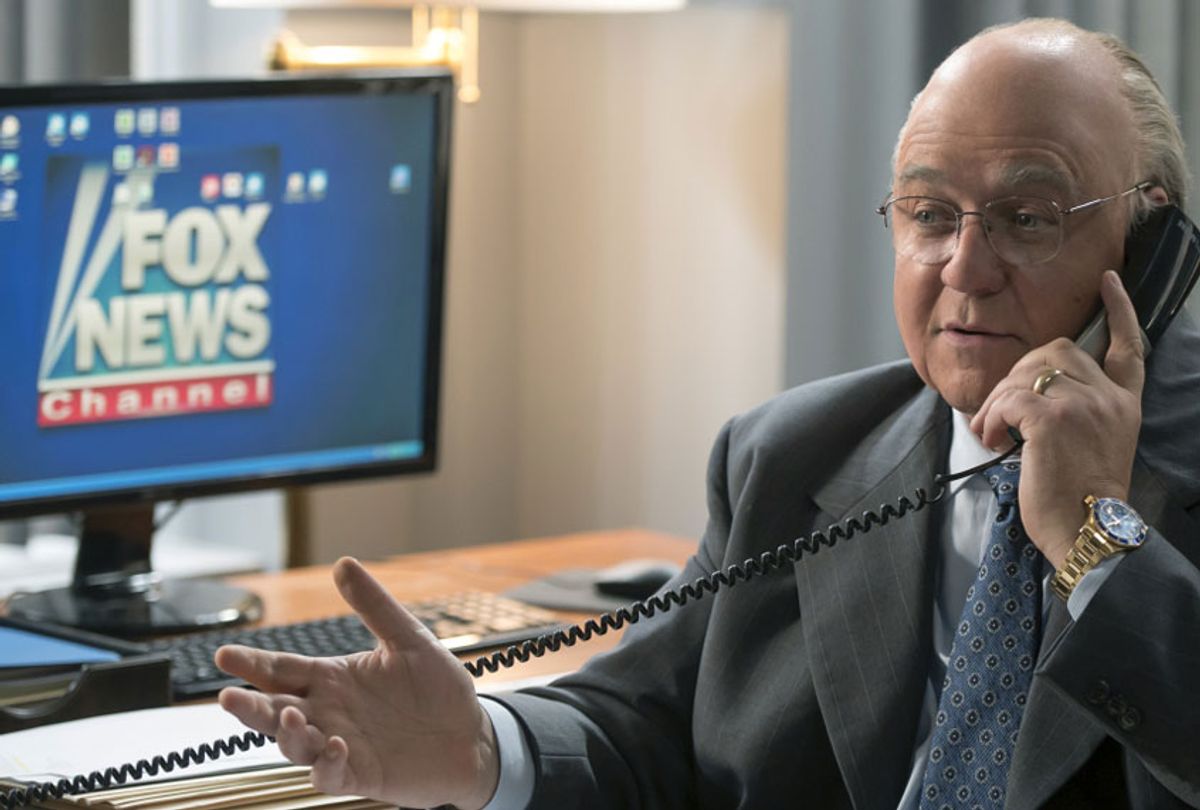 No truly fair and balanced biographical drama should not look upon Fox News founder Roger Ailes with affection or sympathy. As Showtime’s “The Loudest Voice” opens, the fictional version of conservative media boss, played by Russell Crowe, shows no indication that he’d want either, predicting in a voiceover that he knows how he’ll be remembered: “right-wing, paranoid, fat.”

That moment also is a hat tip to Orson Welles and “Citizen Kane,” in that it dramatizes the moment Ailes dropped dead in May 2017. Whether the viewer is satisfied by that vision or considers it to be a tragedy doesn’t seem to be Tom McCarthy’s concern. As in real life, it is a moment not colored by mourning or even karmic justice, give that he died under a cloud of sexual harassment allegations yet to be resolved.

By that point, too, Ailes had created a media force that shifted the country irrevocably rightward and seized control of a nation’s narrative — not just in terms of current news and information but emboldening a rewrite of history and our interpretation of fact. His life’s goal had been achieved, the damage done.

An array of legal documentation, some sealed and some public record, establishes Ailes' legacy as one built upon bullying, exploitation, manipulation, dishonesty and outright racism, and that merely refers to its impact on television journalism. “The Loudest Voice” depicts Ailes exercising a Svengali-esque level of psychological control over the women around him, some of whom played along while others, namely former Fox anchor Gretchen Carlson, fought back.

And like Ailes’ most successful product, this seven-part limited series, debuting Sunday at 10 p.m., is a purpose-driven creation targeting a very narrow audience. Not liberals, not conservatives, but industry awards juries. The prosthetics work alone should be enough to make makeup artist Adrien Morot a frontrunner at the Golden Globes and next year’s Emmys, if anyone remembers “The Loudest Voice” by that point.

Russell Crowe’s transformation into Ailes has been well-chronicled by now, and the amount of latex piled on the actor to make him resemble the jowly, corpulent Ailes is indeed impressive. But Morot’s true masterpiece is Sienna Miller’s transformation into Ailes’ wife Beth, achieved with such skill that Miller completely disappears into her alter ego’s synthetic skin.

In the four episodes provided for review, Miller portrays Beth as a woman who might not be a full accomplice in Ailes’ greatest crimes but at the very least went all-in on a deal with the devil. Giving up her career to please Ailes buys her a life of security and wealth in an exclusive exurban enclave, as long as she does what she’s told and closes her eyes to his lechery. Miller’s look exceeds Naomi Watts’ stunning entry as Carlson although, to be fair, Watts’ time in the spotlight comes in the final three episodes.

By the way, when a review leads by praising the makeup, that should tell you something.

“The Loudest Voice,” adapted from Gabriel Sherman’s 2014 book “The Loudest Voice in the Room,” is a series meant to show the viewer what kind of man Ailes was and how his vindictive, self-aggrandizing personality amplified through a cable news network that few expected to succeed in 1995, when the series begins.

Today, as we know, Fox News shapes the current administration’s policy as opposed to merely selling a war at the behest of a president, as it did during the George W. Bush years. But beyond the opening hour, when McCarthy (who won an Oscar for “Spotlight”) lays out Ailes’ marketing-informed strategy to defeat CNN and MSNBC by creating conservative-favoring platform product and calling it news, the series becomes more salacious than illuminative.

That said, “The Loudest Voice” basically does what it’s supposed to do, which is to showcase the cast’s admirable acting skills, Crowe’s in particular. The Globe- and Oscar- winner climbs inside of Ailes pugnacious, piggish personality as skillfully as one might predict.

And while Crowe isn’t visibly enjoying playing the villain, he pours a sufficient level of complication into his portrayal so as to help the viewer understand why people like former Fox News booker Laurie Luhn (rendered with devastating fragility by Annabelle Wallis) would remain loyal to such a malignant creep even as he allegedly forced her into sexually servicing him.

“The Loudest Voice” hums along in scenes that crack open the can of maggots, bearing witness to levels of power-brokering that extend beyond party loyalty, a practice engaged in mostly for appearance.

Any number of films and TV series about politics do this, but this version displays an awareness of the time in which it’s airing and how its dialogue is likely to be be perceived. Fox News isn’t likely to be concerned one way or another the series’ impact on Ailes legend — again, the damage is already done — but  an exchange between Ailes and Barack Obama’s campaign strategist David Axelrod (David Cromer) about Joe Biden could make a few folks in the former vice president’s camp cringe.

“Lovely man,” Crowe’s Ailes says, “but Joe is as dumb as an ashtray.”

Axelrod explains that Biden plays well where Obama’s campaign needs him to: “Catholics, union guys, the military —“ and Ailes interrupts to put it more plainly: “White people. He plays well with the white people.” Which the network founder understands, since that’s Fox’s entire strategy. For that matter, it also appears to be Biden’s right now, in the current race.

Crowe’s performance grows darker and meaner, and his bellowing contrasts well with the comportment of Seth MacFarlane, playing former Fox News PR chief Brian Lewis' evolution from swaggering network hitman to a guy increasingly troubled by his boss’ gleefully divisive tactics. Simon McBurney lurks around the fringes as Rupert Murdoch, but Murdoch mostly is there to object to Ailes taking things a bridge too far until the hate machine becomes too lucrative to complain about.

In case you’re wondering, Megyn Kelly has no part in the series, and Bill O’Reilly is only mentioned in the context of paying off his harassment victims to keep them quiet. Neither’s absence is felt.

The further the plot progresses in “The Loudest Voice,” the less insightful the story becomes. Episodes hit the major watermarks in Fox News’ history, as they must, starting with its launch and examining the transformative effect of 9/11, Ailes’ molding of Sean Hannity and diving into his overt racial animosity toward Obama.

But soon Ailes’ sexual misconduct and manipulation overshadow the rest of the action, which could be understandable considering the recency of all the allegations against him surfacing.

However, the approach “The Loudest Voice” takes to dramatizing these ugly chapters raises the question of who this drama is for.  Those who despised Ailes might, for a moment at least, respect the effectiveness of his business acumen, succinctly spelled out in the first episode. But that audience may quickly tire of the bile and sleaze oozing through the series between the bouts of screaming and sneering. People who love Fox News and Ailes probably won’t watch anyway; those who do may glean some perverse entertainment at seeing the big man order Wallis’ Luhn into her “uniform,” a set of black lingerie with garters — although getting there requires them to put up with a lot of sacrilege.

It’s also worth wondering how much of Hollywood’s current fascination with Ailes is driven by his convenient role as a stand-in for Harvey Weinstein and the outrageousness of his abuses as opposed to any indicator that the audience wants to be reminded of who Ailes was.

Later this year John Lithgow will play him in “Fair and Balanced,” directed by Jay Roach (“Recount,” “Game Change”) and co-starring Charlize Theron as Megyn Kelly and Nicole Kidman as Gretchen Carlson. This is a theatrical release scheduled for December, the heart of awards season, and its competitive potential likely matters more to its producers than whatever it earns at the box office.

Or they should hope it does: Alexis Bloom’s documentary "Divide and Conquer: The Story of Roger Ailes" garnered positive reviews from critics, but grossed around $38,510 at the box office and was released in 13 theaters. Different situations, of course; Bloom’s is a straight-forward treatment of Ailes’ effective bludgeoning of traditional media with his right wing propaganda machine that observes the traditional rules of nonfiction filmmaking, a forum perhaps not suited for a man quoted in “Loudest Voice” as declaring, “Lines are for suckers.”

Even before that new movie’s release, a bigger obstacle “The Loudest Voice” may have to overcome is Ailes’ thorough saturation of our political and social reality as we know it. Does it matter that Crowe’s portrayal is able and passionate, that he has the distinct capability of making a viewer angry in one moment and one’s skin crawl in the next, if it doesn’t tell us anything new about Ailes repugnance?

Probably less, I’d imagine, than the fact that his death hasn’t halted the crushing effect his machinery has on democracy as we know it. “The Loudest Voice” is one of many rage-fueled works enveloping us today; that it is scripted doesn’t matter. Whether it’s fiction or the fiction being passed off journalism that Ailes’ brainchild still trades in, the takeaway is the same: Roger Ailes is dead, long live Roger Ailes.  And God save everyone else.