The dark arts of Fox News' Roger Ailes: "If Trump didn't exist, Roger Ailes would have created him"

Salon talks to Alexis Bloom about her documentary "Divide and Conquer: The Story of Roger Ailes" 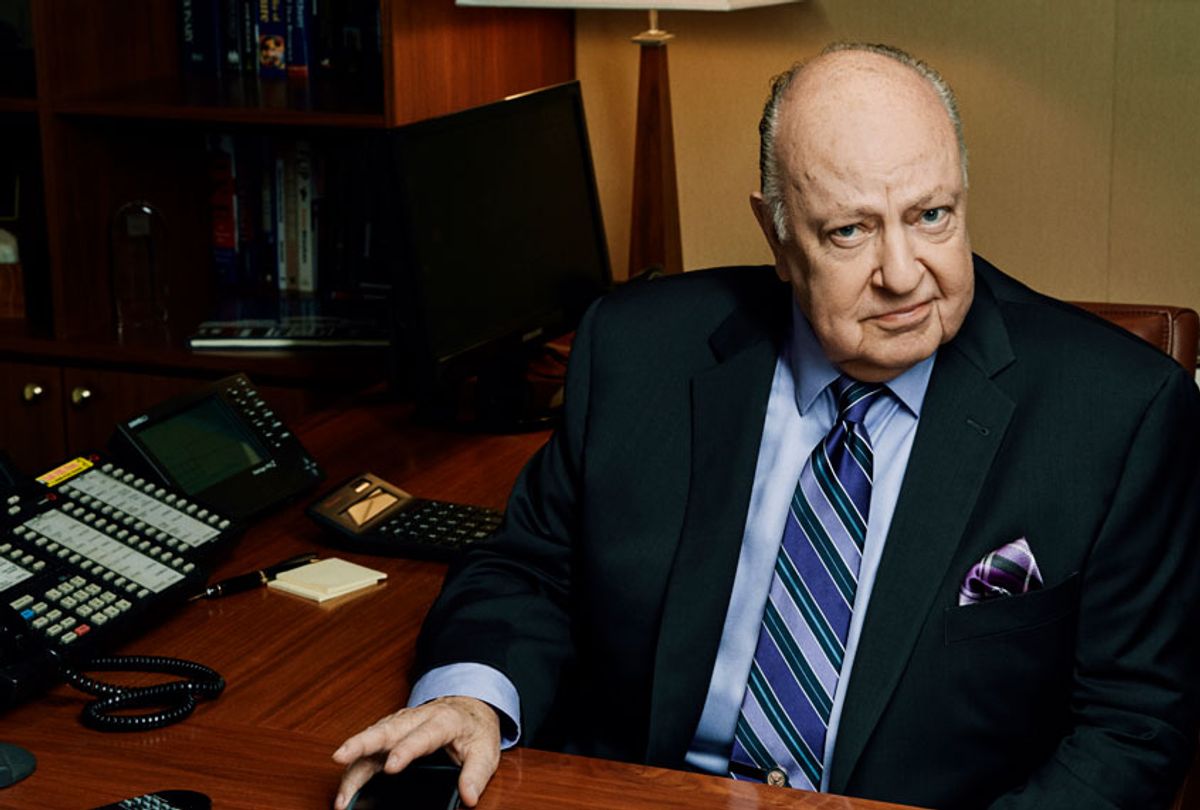 Roger Ailes poses in his office in 2015 in "Divide and Conquer: The Story of Roger Ailes" (Wesley Mann/Magnolia Pictures)
--

“Divide and Conquer: The Story of Roger Ailes,” Alexis Bloom’s rollicking documentary about the late, disgraced, Fox News CEO and sexual harasser, is thoroughly riveting. The film is, according to its director, “A deep dive into the life of a man who forever changed the face of media and politics.”

Bloom shows Ailes’ influence as a kingmaker. He helped Richard Nixon, George H.W. Bush and, of course, 45, get into office by using the power of television to sway voters. He once helped Mitch McConnell get elected in Kentucky, and his fingerprints were all over the Willie Horton ad that shows then-candidate for President Michael Dukakis as soft on crime — while also creating the image of a “scary black man,” that fed into the Republican voting base.

Ailes poured gasoline on a fire because the more folks were outraged, the more they watched. Bloom’s shrewd film unpacks the Fox News model of “riling up the crazies.” He got emotional reactions from people, especially those in the heartland, by keeping the story out of the “critical (read: liberal) press.”

But “Divide and Conquer” also shows some personal aspects to Ailes. He liked to tap dance. He carried a gun (even getting arrested for that once) and was so paranoid he added extra security in his office after an encounter with a Muslim employee. Ailes also was lonely and wanted to be liked, trying to befriend Richard Shea, a man who was his rival in Cold Spring, NY.

His despicable treatment of women is also examined. Ailes often picked on the vulnerable and manipulated things, putting one career women on a “no hire list” after she refused to sleep with him, or harassing a possible hire by asking her to twirl for him in their interview.

Bloom shows how Ailes commanded (and rewarded) fierce loyalty. He protected Bill O’Reilly when he was faced with a harassment suit, and hired Bo Deitl, a private investigator as a bombastic talking head to support claims and do damage control. Trump was “Fox-y,” too. One interviewee says that, “If Trump didn’t exist, Roger Ailes would have created him.”

Salon chatted with Bloom about Ailes, and her smart, sharp documentary.

How did you come to make a doc on Roger Ailes? What made you want to investigate him, understand his power and influence, and his politics?

I spent a year and a half with “him.” He is fascinating and complicated, and we live in his world. We ignore Roger Ailes at our peril. It’s too easy to dismiss someone as monstrous or “other,” and I feel that’s how we got in to this situation in the first place. It’s accentuating the divide. We are all human. He’s an ordinary American who engaged in extraordinary acts — both successful and cruel. He’s important and he’s fascinating.

I thought you connected the dots and explained his ascent and subsequent fall very clearly. I love the suggestion that MSNBC prompted Ailes to go to Fox News and create a media sensation. Can you talk about that?

It’s ironic that MSNBC became arch rival of Fox News. It was Ailes being motivated to consistently beat MSNBC. The [moments] are all stepping stones when you look at someone’s life — the component parts don’t explain exactly everything, but Ailes’s work on “The Mike Douglas Show” brought him out of Ohio and introduced him to show biz and power intermingling. Every politician and star came on that show. We left out “The Stanley Siegel Show,” which was relatively low production values. But these bits all inform him. The people at “Mike Douglas” and “America’s Talking” all loved him, and a lot of folks from “America’s Talking” went over to Fox. Steve Doocy fixed Roger Ailes’s toilets. He was on “America’s Talking.” Roger loved Steve because he was so handy.

What can you say about the research you did, the clips you assembled, and the stories and interviews you uncovered and reported to tell Ailes’s story? I was impressed by much of what was discussed, and what folks revealed.

On the one hand, people in the media really know the story of Ailes. But the ordinary person I found knows nothing about him. Sometimes they knew a little about him. Gabriel Sherman did a good book about Ailes, and we tried to go further, but we had to explain who he was in an elementary way. He didn’t have street recognition. I want the film to be used and seen widely. We took a broad approach and I tried to make it as lyrical as possible. There were archives of Roger. You can test an audience’s patience only so much when you subject them to a lot of C-Span. I approached it like any other story.

He has a wife, a son, and elderly brother, and I couldn’t interview them. His wife didn’t do any interviews with media. She’s fiercely defensive, and there are some ongoing legal issues she’s dealing with. His son is young. and still had some raw feelings.

I like the victim narrative Ailes try to hide behind. But I saw through some of his mythmaking. Is Ailes that insecure? Or is he really that transparent?

I think he’s that insecure. He wanted to be something other than he was. He believed in some sort of warped idea of patriotism, a cookie-cutter version of the military he wanted to serve in but couldn’t. He became incapacitated and hugely overweight. He engaged in acts that weren’t laudable. He was paranoid and commented on his paranoia.

You tell a lie enough times and you start to believe it. He had a carapace; that he was a tough guy that came from the School of Hard Knocks. He laid sewer pipes. It begs disbelief on some level. He probably did have a tough upbringing, but I don’t think everyone who does turns out to be as ruthless as he was. Many people believed what he said, and he got away with it. He told Glenn Beck he invented the split screen. But the split screen was used in Nixon/Kennedy debates. Roger must have known that was not true. He must have. Glenn Beck believed it.

You show Ailes’ manipulation, his maneuvering, and his naked ambition. What do you think drove him to use and abuse the power he had? Is this a cautionary tale?

It is a cautionary tale. That’s why we open with Glenn saying it’s easy to become a monster. Power has got a corrupting influence and I think it did, and he was under pressure to maintain his audience and ratings at Fox. He started to drink his own Kool-Aid.

I don’t know what accounts for his… We try to give you clues so you can make up your own mind. His mother wasn’t affectionate. We included that because it seemed important. But that may not explain why he was an unmitigated shit towards women. But his wife stands by him.

Can you talk about the women he harassed? Kelly, Lidia, and others seen in the film were treated badly. They suffered indignities, and in some cases had their careers ruined.

Kelly did have her career ruined, then she went on to have children and took a number of years out of her career before piecing together another career. Lidia worked for a Fox affiliate in a different capacity and ended up suing Fox. All of these women are more complicated than they seem. They are totally dignified women who go through something in a quietly devastating way. They are not subjected to something violent in a back alley. But that’s what is important to understand: you don’t have to be raped or violently attacked for your life to be altered.

There is a very interesting section of the film devoted to his life in Cold Spring, NY. He bought the local paper, tried to infiltrate local politics, and was ostracized by the community for being a bully. I like that you showed Goliath losing against David. What observations do you have about this episode in his life?

Richard Shea, from Cold Spring, is everything Roger isn’t. Roger was mesmerized by Richard. Roger sent Richard the cover of The Hollywood Reporter when Roger was on it. Richard is a really good guy and he listened to Roger and engaged with him. Cold Spring is a perfect petri dish for the rest of America. But they can control their destiny in a way the rest of us are struggling. It was a Lilliputian study of these Goliath things that happen elsewhere.

What surprised you about Roger?

What surprised me was when Glenn Meehan said he had tap dance lessons, but it made sense. He was in show biz and liked a flourish. He was kind of old world. Alisyn Camerota said he spoke like Spencer Tracy and was old fashioned. He wasn’t going to do Zumba. I was surprised by his level of self-mythologizing. He had enough achievements that it was surprising he pushed it further. I was surprised by his paranoia and the guns and ammunition in his office. Why do you need that when you have steel reinforced doors, cameras, and guards? He was generally terrified for his life. I don’t know how anyone lives with that soundtrack of paranoia.

I was surprised people liked him as much as they did. They think he was funny.

Ailes “cast a long shadow in his vision of control on our culture.” How much of Ailes is Murdoch’s fault?

How much of it is Murdoch’s fault? Murdoch bankrolled him and looked the other way. Roger picked his legal counsel and head of HR; it was his fiefdom. In that sense Rupert Murdoch was culpable. As long as Roger was making money, Murdoch didn’t care. He was breaking the rules and acting the way a CEO and functioning head of a corporation shouldn’t act. We know he knew Rupert Murdoch had to sign off on lawsuits — and he did. So, he’s totally responsible for Ailes in some way through his neglect and avarice. Rupert Murdoch’s ideology dovetails with Ailes’ in some regard. They are both right of center, and Rupert Murdoch could shift allegiances when it suited him — e.g., about Blair and Obama. There’s no Roger Ailes without Rupert Murdoch. Roger’s skill set made it happen. Rupert Murdoch left running of company to Roger.