As a tribute to his father, this digital media food world sensation turns his charm and attention to cookbooks 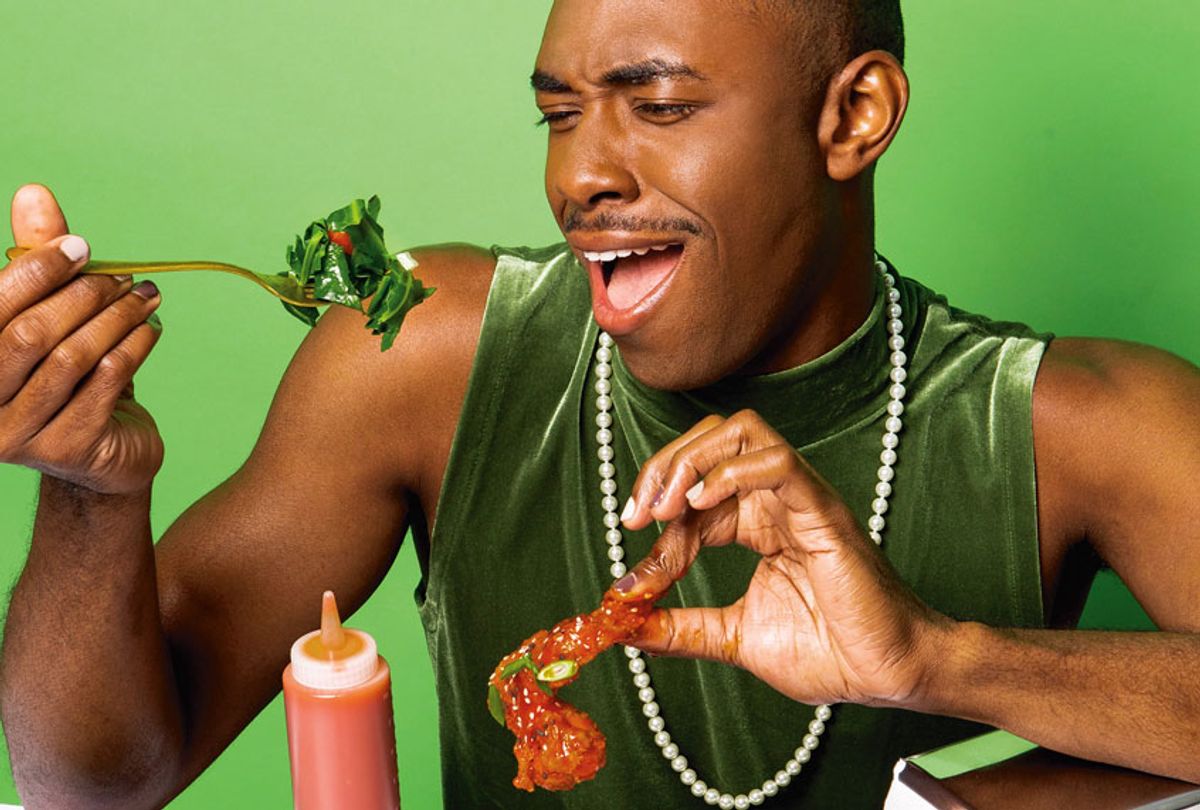 Every once in a while at SalonTV, we shoot a cooking demo. We have a fine kitchen which is reasonably well appointed. The evening before Lazarus Lynch, the Instagram sensation — a delightful small screen polymath from South Jackson Queens, was scheduled to join us for a demo and interview his publicist checked in to make sure there was a cast-iron skillet on the set

No problem. Salon's video boss offered one of mine. Surely Manny has a cast iron skillet he can lend to the effort.

Here's the thing, and if you have also been seasoning such a skillet for more than half a lifetime you already know this, one doesn't really loan out the tools — definitely not the knives, surely not the cast iron.

Who is this kid, anyway? I thought. I'd read the 24-year-old's book, "Son of a Southern Chef." Compelling sure, engaging, whimsical, all good. But am I going to give him a chance to foul my Number One skillet, it's seasoned surface as smooth as a skating rink at sunrise? Not a chance. Maybe I'll let him work with my back-up pan. More research was required. There is no shortage of Lazarus Lynch video evidence. His cooking demos are both entertaining and instructive, business-like even and he knows enough to recommend Maldon salt. Lynch kinda killed it during his "Today" show appearance, and Wendy Williams producers definitely should have given him more minutes for his segment. I even got my teenage daughter to check him out on SnapChat. "He's cool," was her appraisal after scanning two episodes. "I think, maybe, he'll make cooking shows interesting for young people again."

It was his own YouTube show, "Soul Food Talk," that sold me. In one epidode, shot in his Auntie's kitchen in North London, Lazarus is very pleased to welcome his guest, the photographer and young director, Myles Loftin. As they catch up and talk about Loftin's work a calm settles on the room, there's some deep listening happening here, and I'm momentarily transfixed. The two proceed to the cooking section — fried fish and cornbread — of the segment and the calm remains. Lynch is no digital media huckster. He's magnetic, certainly. But he's watching and listening to the world around him.

This man can use my Number One skillet, even if he is going to make grilled mascarpone cheese with Nutella and bacon in it. But not until after we sat down and got into about dad's and cooking and what you'll do for love.

Watch Salon's cooking demo with Lynch here, and read the Q&A of our conversation below.

In a lot of ways, your new book, "Son of a Southern Chef," an homage to your dad and the work that your dad did.

Can you tell me a little bit about him?

My father, Johnny Ray Lynch, was a great man. Yes, he's my father, but he's also sort of my cooking hero. He was my friend, he was my mentor. My father grew up with his four brothers and sisters in Bessemer, Alabama. When my dad was six years old, his mother decided, "Okay, we're going to move to New York, start a new life." And they did that, but they brought along with them all the stories and kind of cultural ways that they had in Alabama, which were cooking, church on Sundays, his mother, my grandmother, was a beautician, so she did hair out of her house. She sold food on the weekends out of her house and cooked for the church.

My father sort of witnessed his mother being the woman who did everything, and took care of them, and made sure that they had food on the table every day. I had no idea, I didn't know any of this growing up as a kid. All I knew was my father being a guy who owned his own businesses. He owned a clothing store, retail store, fashion store, and a restaurant all at different times, but as a child. I just remember watching him do that, and get in late, and the way that we bonded was either over music, he played the saxophone. He bought me my first drum set when I was about seven years old. We would blast the music in New York City in the apartment, blast music, blast Stevie Wonder, or Cher, and just go to town.

Those were the early days of getting to know dad. Obviously he's my father, so he was always around. It wasn't until I was about 10 years old that he opened the restaurant and I saw him less and less at home. I started to miss him, as any kid would who loves their father. I was like, "Dad, can we cook together?"

Yeah. So he would get in late, at like eight o'clock at night, that was late for me as a kid. He would be like, "Okay, come on, let's, let's go to the kitchen."

So this was before the restaurant?

I was probably 10 years old, so this is year one or two of the restaurant. Early days. We bonded together in the kitchen. That's what we did. It was literally, let's throw some rice krispie treats with marshmallow fluff and peanut butter and let's make a cool little snack. Those were the early days. And here we are, we're still making very sweet chocolatey snacks.

This is the New York chocolate milk.

This is the New York chocolate milk. That's the story of his life. My father passed away-

January 2015. Thank you. He had cancer, he battled cancer. It was very rough and we closed the restaurant down. There was no one really there to keep it going, my mother was his partner. I kept the legacy going with celebrating all those recipes, and all those stories of him inspiring me, and hopefully through the book I'll inspire so many other people.

You were already doing it outside the house as well.

I was doing it outside the house. I didn't quite know that I wanted to be a chef until dad opened the restaurant. I thought I was going to be musician, I said I was a drummer. I thought I would be a designer or an animation designer because I did a lot of drawing and was very artistically driven. It wasn't until the restaurant that I thought maybe I'd be a chef.

Do what dad does.

You were doing it in public in a lot of ways, because you were also on Instagram, right? You were-

Oh, way before that.

You continued into college, right?

Continued into college from high school. But let's talk about the high school for a second.

The high school's a great place.

I know you love it.

Is in New York City. It's a school that focuses on culinary, it's the only school in New York that 100% focuses on culinary arts. Every day I would walk into a classroom and there'd be a chef wearing a chef hat, and a white chef coat, and an apron and we got to work. Then the other part of my day was reading novels, and taking math classes, and doing what other kids did at other public schools.

Every morning was really the kitchen and then high school started?

Right. Either in the morning or in the afternoon. So you did a half a year of baking and pastry and you did the other half a year of cooking. Then in your senior year, and this is mandatory to graduate, you had to intern somewhere. We had a list of about 30 sites, restaurants, catering halls, Food Network, so I said, "I think I want to do that. I think I would work at Food Network." That's really the job, the internship, that opened up my eyes to what was possible in the food world.

The only example I had was my father. At the school I had the other examples of chefs, but they all looked the same, they all were working on the line. Food Network opened my eyes to show me that chefs could work in all different types of media, chefs could be writers, chefs could work on magazine stuff. Totally opened my eyes, here I am, this 16 year old kid walking around Food Network, bumping into Rachel Ray in the hallway and thinking, "Oh my God, is this happening?"

Yeah, they're everywhere. That's sort of the long story short of what led me to even decide to start cooking publicly.

Can you talk a bit about that?

Sure. Last year of high school, I feel like that was forever ago.

But last year of high school, it was 2012, not too long ago, I started blogging and I started writing. I had a website called keepingithealthy.com, which is actually the milkshake's blog on that recipe, on that page. I started the website and the goal was really just to write and keep things updated on the website. I had a teacher said, "You're a really good writer, you should write." I had another mentor that said, "Maybe you should start a blog." I literally did it for the fun of it.

Someone at Cooking Channel discovered my blog. They said, "We got to know this kid. Who is he? Where does he live? He's talking about this amazing high school we've never heard of in somewhere called Hell's Kitchen in New York City. What does that mean?" They showed up to the school, they reached out to the principal, showed up to the school. We met and they said, "We want to do a video with you." And I said, "Okay." They sat me in front of a camera with 13 people in the room, and it was silent, and they just said talk. I'm nervous. And I'm like, "Okay. Hi, my name is Lazarus." They said, "Tell us about your website, your blog." I told them about the blog and they said, "Tell us about your father." Once I started to talk about my father, all the nerves went away. There was a peace that came over me and I just talked.

That piece, they put the commercial together in a campaign called Food People, and it ran on the Cooking Channel, it was syndicated nationally. I went from this high school student, obscure person, to suddenly being on Cooking Channel every night.