On the 50th anniversary of Stonewall, activists seek to "Reclaim Pride" from corporations and police

"A main reason we are doing the Queer Liberation March is because the march has lost its soul," Eric Sawyer says 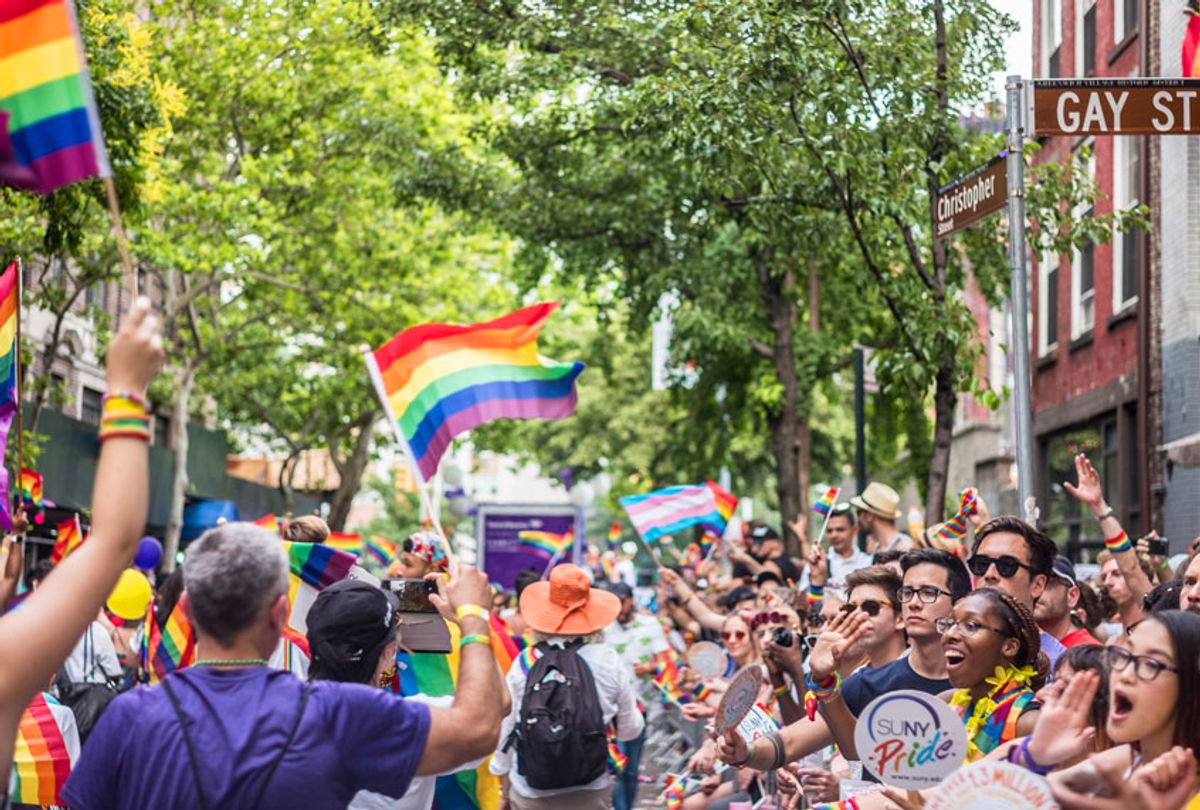 In Nanette, the standup show by Hannah Gadsby, the comedian tells the audience that her first introduction to gay people was seeing the Sydney Gay and Lesbian Mardi Gras on TV, recounting jokingly: “Oh, there they are — my people. They’re busy aren’t they? Gosh, don’t they love to dance and party? I used to sit there and watch it and go, where . . . do the quiet gays go?”

Pride has not always been a celebration — far from it. The flier that announced the first Pride march in New York, 1970's Christopher Street Liberation Day March, read: “Gay Liberation is for the homosexual who stands up and fights back.”

The modern LGBTQ rights movement was famously born in June 1969 when patrons of New York’s Stonewall Inn, a gay bar in the Greenwich Village neighborhood of Manhattan, fought back against a NYPD raid. Twenty-one people were arrested and many were injured in the riots against police brutality that ensued over the coming days.

The New York City Pride march, which annually commemorates the Stonewall uprising, is believed to be the largest Pride celebration in the world. This year, on the 50th anniversary of Stonewall, it will face a competing march. The rival, known as the Queer Liberation March, is organized by the Reclaim Pride Coalition, who seek to commemorate the legacy of the Stonewall uprising by returning to its radical roots.

In recent years, a group of activists began marching as a resistance contingent in protest of the huge role that corporations and police have come to occupy in the annual Pride march.

“We were part of a group that fought for and actually were able to achieve a separate contingent towards the front that represented the resistance to the current administration in Washington,” said Charles King, the CEO of Housing Works, a New York City non-profit dedicated to fighting HIV/AIDS and homelessness. "Last year, that group got moved way to the back."

Across two years, activists from the Reclaim Pride coalition gave a set of demands to Heritage of Pride, the non-profit which has produced the NYC Pride march since 1984. Those included more transparency in the planning of the march, no corporate floats, for police officers to be unarmed and in civilian clothes and for no barricades to be along the sidewalk of the march so that any attendee could join the walk.

When Heritage of Pride refused to cooperate, Reclaim Pride moved to organize their own march that was anti-neoliberalism, police free and open to all. Heritage of Pride did not respond to a request for an interview from Salon.

Reclaim Pride believes New York City Pride march has been pink-washed, or used simply as a branding tactic by corporations seeking to be perceived as progressive, modern and accepting in order to appeal to and market their products to a wider customer base. They allege that corporate dollars pay for priority placements that should be given priority to LGBTQ advocacy and service organizations.

"A main reason we are doing the queer liberation march is because the march has lost its soul," Eric Sawyer, a co-founding member of ACT UP who helped organize the Queer Liberation March, said. "It has become a corporate marketing platform more interested in big donations from corporations to have floats for them to display their goods and market their brand than address the serious issues faced by our community members not only in New York, not only in the U.S. but all around the world. We need to have pride once again return to a march for our rights — issues which in many places are literally killing a number of people."

"Even in the U.S., we have gay people still being killed in gay-bashing. There are more than 25 states where it is legal for employers to fire their employees for not being straight. Trans women are murdered with no police follow-up, in many cases. And many times, violence is done at the hands of law enforcement officials. It's issues like this that we need to draw attention to," Sawyer continued. "Globally, there are more than 70 countries where being gay is a crime, where prison sentences range from 10 to 25 years if convicted just for being gay. And, in seven countries, being gay is a crime punished by the death penalty. These are the issues we should be highlighting at a gay pride march — not talking about corporations, their pretty floats and their products instead of marching in the streets for our rights."

Does the outward appeal of corporations to be LGBTQ-friendly reflect a mainstream acceptance? Perhaps not. Brands that promote Pride Month are not always consistent in their support of the LGBTQ community. In fact, many of the companies who plaster rainbows over their logos are actually the same corporations who donate to anti-gay politicians. According to a new report from Popular Information in partnership with Progressive Shopper, nine of the biggest LGBT-friendly corporations in America donated $1 million or more each to anti-gay politicians in the last election cycle.

The biggest donor, AT&T, which donated $2,755,000 to 193 anti-gay politicians from 2017 to 2018, touts their commitment to the LGBTQ community in press releases. One such politician is Sen. Marsha Blackburn, R-TN, who was given $22,000. "Blackburn is a vocal supporter of Trump's effort to roll back trans rights in the military, voted against LGBTQ-inclusive hate crimes legislation, opposed the Violence Against Women Act because it included protections for LGBTQ people and opposes marriage equality," the report reads.

“They pay money to be in the front [of the parade], they pay money to be on floats, and it's become very commercialized — and not about people’s rights. It's a lot of 'love is love', but no one’s talking about trans women of color being murdered — people like Layleen Polanco. We don’t know what happens to them when they go to prison and don’t have the resources or the help to get justice,” Francesca B., a queer activist and organizer for Reclaim Pride, said.

Corporate sponsorships are mechanisms to fund infrastructure and security and to engage big names to appear in the march. But for the organizers of the Queer Liberation March, that overlooks a key reason why we march: "for an end to individual and institutional expressions of hate and violence, as well as government policies that deny us our rights and our very lives, from the NYPD to ICE, from the prison industrial complex to state repression worldwide."

“I think Heritage of Pride is a bit bullheaded about it and solely focused on what the dollars are and what that’s going to raise. Does it really help a corporate entity — whether it’s an airline or anyone else — to buy a position that diminishes the role and visibility of the people whose rights they’re trying to support? Or frankly, does Heritage of Pride only care about the middle-class white LGBT community who’s got it made and is now more accepted just like everybody else?” said King.

When it comes to policing, transgender people and people of color often feel uncomfortable with officers in uniform, because of the history of violence against them which continues till today, even in what should be safe spaces like Pride. Just last year, ReeAnna Segin, an 20-year-old transgender woman, was arrested after trying to burn a thin blue line flag in protest at Philadephia's Pride parade, even though flag-burning is not illegal. She was reportedly sent to a men's prison before being bailed out.

Considering that the Stonewall uprising is largely credited to people of color and transgender people, it is especially concerning to activists that their concerns are brushed aside. As King puts it, "the people I serve are the people who were most put to the margins and have the most to do with what we achieved with LGBT rights and are the people who are fighting for those rights that still haven’t materialized in a meaningful way. If you just look at the number of murders that transgender women of color have experienced both in New York and in this country, it's hard to understand why we wouldn’t be putting the fight for their lives front and center."

According to Francesca B., Reclaim Pride will not allow police to march in the Queer Liberation March and has requested for "minimal police presence for the safety of the people marching."