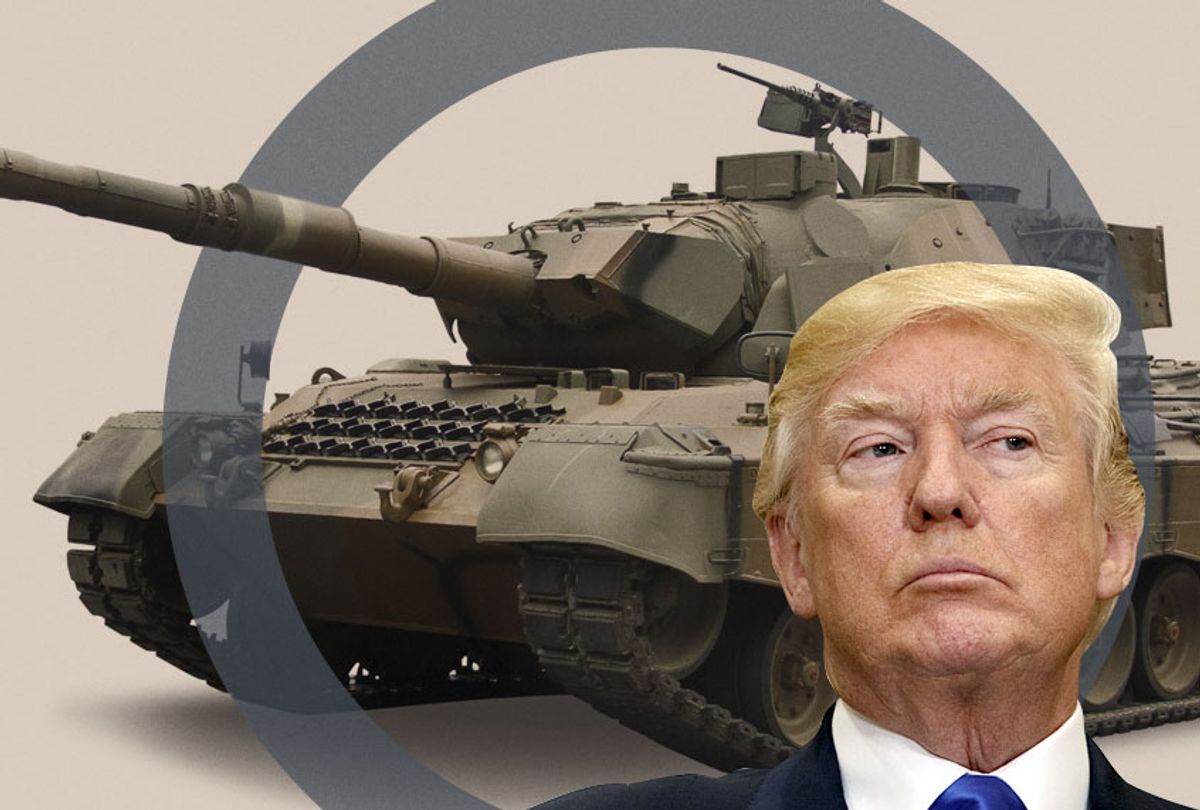 President Donald Trump has reportedly requested that massive military tanks or other armored vehicles be stationed on the National Mall during his Fourth of July address to the nation.

Trump's "Salute to America" event is planned to be grand — the president has already ordered a flyover by military aircraft, including Air Force One, according to The Washington Post — and is interested in showing off an F-35 stealth fighter and having Marine Helicopter Squadron One involved in some way, as the group that manages the presidential helicopter. About 300 service members are expected to participate in the event in various capacities, but that number could rise, the newspaper noted.

Negotiations for the use of the military vehicles are reportedly still underway, with some of the vehicles weighing 60 tons or more while others have tracks that can be especially damaging to roads. The Pentagon is reportedly considering having static displays of the massive tanks and armored vehicles during the celebration.

The D.C. Council has expressed concern about the potential impact of driving armored vehicles on the city's streets, including road damage.

"We have said it before, and we'll say it again: Tanks, but no tanks," the council tweeted.

The Independence Day celebration will feature a 35-minute fireworks show valued at $750,000. The pyrotechnic show, which has been donated by two major fireworks firms, will be fired from West Potomac Park. The display will show a massive American flag and the words "U.S.A." spelled out in the sky.

Along with the fireworks display and other festivities, Trump will address to the nation before '90s heartthrob John Stamos kicks off a star-studded tribute to celebrate the country's 243rd birthday, with performances from singer-songwriter Carole King, actress and singer Vanessa Williams, pop singer Colbie Caillat and an appearance by the Sesame Street Muppets.

Officials are still working on developing a distribution system for tickets to the VIP section, as well as other details related to crowd management, according to The Post.

"This is going to be a fantastic Fourth of July with increased access across the National Mall for the public to enjoy music, flyovers, a spectacular fireworks display, and an address by our Commander-in-Chief," Interior Secretary David Bernhardt said in a statement.

"We received an extraordinary donation for a phenomenal fireworks display, and our colleagues from the Department of Defense will be providing a one-of-a-kind music and air power experience including a flight demonstration from the Blue Angels," he added.

The Defense Department has not yet released an estimate for how much the celebration could cost taxpayers, but the use of numerous military jets and tanks could hike the cost of the event by millions of dollars.

The move has also prompted criticism from some Democrats, who penned a letter to Trump on June 6 asking him to abandon his plans to avoid creating "the appearance of a televised, partisan campaign rally on the Mall at public expense."

"Forcing taxpayers to foot the bill for what amounts to a political rally is irresponsible and a misuse of funds. I strongly urge the president to reconsider his proposed event," Hoyer said in a statement.