Fueled by Tucker Carlson, Trump has suddenly focused on urban homelessness. This could get really ugly really fast 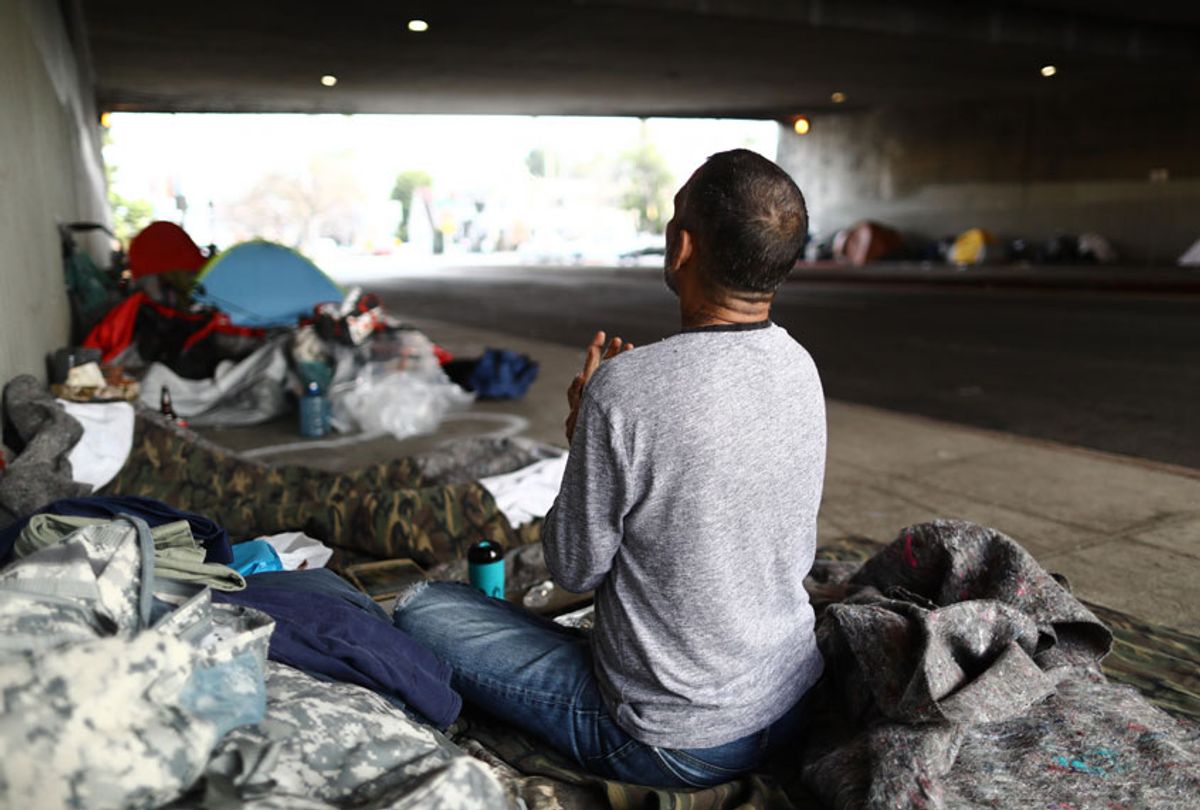 Travis Stanley, who said he has been homeless for three months and is a U.S. Navy veteran, sits on donated bedding, where he normally sleeps, beneath an overpass on June 5, 2019 in Los Angeles, California. (Getty/Mario Tama)
--

If there is one thing we've learned over the past three years or so, it's that if you want to know why Donald Trump is saying what sounds like a non sequitur, turn on Fox News. You will inevitably see that he's been watching one of his favorite sycophantic pundits feeding him the liberal outrage of the day, and he thinks that's reality.

Trump has a certain fondness for the gang at the morning show "Fox & Friends," and Sean Hannity and Lou Dobbs have long been favorites. Trump even hired former Fox executive Bill Shine into the White House, although he didn't last long. Lately, however, he's found a new favorite in Tucker Carlson, one of Fox News' biggest prime-time stars.

Carlson has adopted the right-wing, white nationalist line that Steve Bannon once pushed — but he dresses very neatly, so perhaps Trump is more open to him than he was to the man he labeled "Sloppy Steve." According to Politico, the speculation that Trump had spoken to Carlson, a recent convert to the anti-interventionist line (and had been watching retired Gen. Jack Keane as well) before he changed his mind about attacking Iran was accurate.

It became even more evident that Carlson's star is on the rise in TrumpWorld when he turned up at the DMZ meeting between the president, Kim Jong-un, Ivanka Trump and Jared Kushner. Carlson was so close to the action that he was able to describe Kim looking unhealthy next to strapping he-man Donald Trump. Later it turned out that Carlson had been granted an interview with Trump in Tokyo which produced this very strange exchange:

No one is sure what Trump meant by asserting that the homeless "phenomena" started two years ago. Homelessness has been an issue in America for many decades and in fact the numbers are lower than they were 10 years ago, although they have increased slightly over the past two years. Nor has anyone been able to pin down what Trump has supposedly done about the situation in Washington to make it more palatable for visiting dignitaries.

Nonetheless, it is true that there has been a sharp increase in homelessness in some cities, resulting in contentious political debates about the root causes and what can be done about it. In Los Angeles County, for instance, an estimated 60,000 people are homeless, a 12% increase from the year before. The consensus, if one can call it that, is that the rising cost of housing and lack of new construction, along with ongoing mental health and drug crises have converged into a situation where many more people are living in the streets as well as cars, RVs and temporary shelters. The city and state have appropriated money to create new shelters and try to get a handle on the other problems — but that takes time and is probably an inadequate solution in any case.

On a local level, this is a major topic of conversation. There are homeless encampments in numerous public spaces, and a serious public health problem is developing. But you can be sure that whatever Trump might do to "intercede" will not help. His administration has drastically cut funding for health care programs and Housing and Urban Development projects. His "solutions" are almost always punitive measures that make things worse.

The extent of Trump's knowledge about all this comes from Fox News — and mostly from Tucker Carlson himself. You'll note that Carlson didn't use the term "homeless" when he asked Trump that question. He asked him why American cities "have a major problem with filth." Trump understood exactly what he was getting at, because he watches his show. Carlson is all over this story day after day.

Media Matters has been following the evolution of this theme on Fox News for a while, finding that over the last couple of months  "the network has painted a grim picture of American cities as 'almost Third World in their decay,' facing 'a complete breakdown of the basic needs of civilization,' and filled with 'drugged-out zombies chasing barefooted babies.'" These segments concentrate on West Coast cities like L.A. and San Francisco, characterizing their Democratic leaders as favoring their "rich friends" and pushing "socialist solutions." Fox folks would prefer something a little bit harsher, shall we say.

Clearly, Carlson and the other Fox pundits have made an impression on Trump. When the president was asked at his Tokyo press conference whether he agreed with Vladimir Putin that Western liberal democracy is obsolete, it was obvious he had no idea what Putin was referring to. Trump is such a profoundly ignorant person he understood "Western" to mean the American West Coast, and "liberal democracy" to mean the Democratic liberals responsible for the "filth" in California's big cities. It's obviously on his mind.

I would guess this particular Fox News meme going to become an issue in Trump's re-election campaign. It's clear he thinks it could be a winner. As he told Carlson in the interview, “This is the liberal establishment. This is what I’m fighting, It’s a terrible thing that’s taking place.”

It's highly unlikely that he will convert any Democratic voters in the big cities by denigrating their local leaders.  But that isn't really the point. As the Atlantic's Ronald Brownstein tweeted in response to Trump's comments in the interview:

I doubt that Trump is crunching any numbers. He doesn't do that. But his instincts tell him that his vaunted base hates the big blue cities — because the big blue cities hate him. And Tucker Carlson is handing him the talking points about "filth" and "third world decay" that he can use to demonize the homeless in the same way he dehumanizes immigrants. (You'll notice that he conflates "sanctuary cities" with this issue in his answer to Carlson)

And he may have some inkling that this issue is divisive among Democrats as well. Homelessness is most urgently a problem for the people who can't afford shelter, but it also has many local residents and businesses up in arms. He's undoubtedly unaware of what the Republicans used to call "wedge issues," but if he can drive a wedge between liberals, over pretty much anything, he's had himself a good day.

Don't be surprised if the president comes up with something truly draconian to "solve" the problem. One of Trump's other informal advisers, Fox News' Jesse Watters, suggested that there is only one final solution to the homeless problem: "Bulldoze the 50-block radius, and you institutionalize everybody and detoxify them, and then you let them out."

I'd like to think that was just right-wing hyperbole. But this is a president who is presiding over the brutal incarceration of hundreds of child refugees as we speak. Is it really so hard to believe he wouldn't propose something like that in the heat of the upcoming campaign? And isn't it disturbingly easy to imagine that his followers would start chanting, "Lock them up"?