The original anthem is a classic. The cover, heard in "Stranger Things" s3, is a different kind of underdog tale 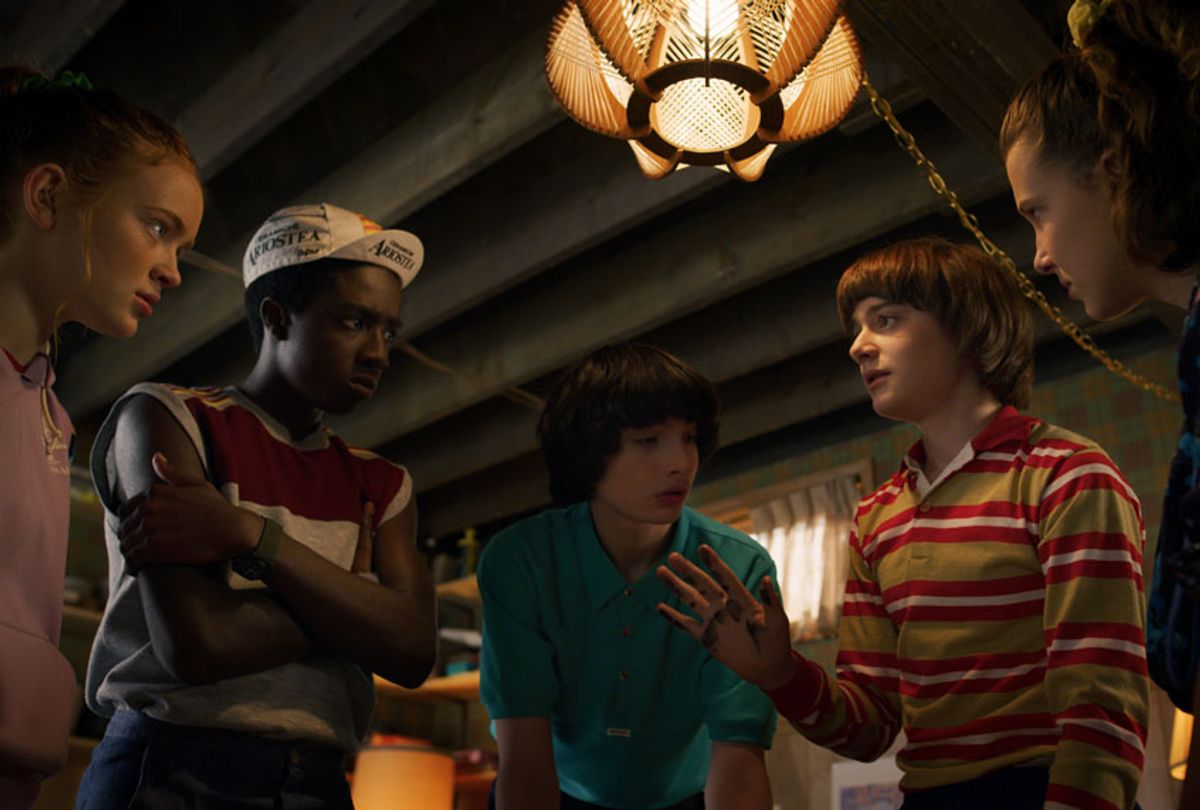 The last few minutes of season 3 of “Stranger Things” turn contemplative after a tightly-edited and action-packed eight hours. With the exception of this soundtrack reveal, this is a spoiler-free zone, so we’re not here to talk about what leads up to those final moments; we’re here to talk about how the show underscores it and the story behind the song.

The season goes out on a haunting cover of David Bowie’s “Heroes” by Peter Gabriel (which has been used by the show once before, in episode 3 of the first season).

The song, reportedly Bowie’s second most-covered, was originally released in September 1977. That was the same year Peter Gabriel released his debut solo single “Solsbury Hill” following his departure from the band Genesis.

“Heroes” wasn’t immediately popular when it first came out (it peaked on the UK Singles Chart at number 12 following Bowie's death), but biographer David Buckley deemed it “perhaps pop's definitive statement of the potential triumph of the human spirit over adversity.”

Which is perhaps why — with the ringing lyrics “We can beat them, forever and ever / Oh, we can be heroes just for one day” — the song is so poignant when found in films about youth making it to the other side of suffering. A perfect example is its appearance in the 2012 film adaptation of “The Perks of Being a Wallflower.” In that movie, “Heroes” serves as the elusive “tunnel song,” a song that makes the main characters feel alive despite dealing with issues like homophobia and sexual abuse.

Even without knowing the plot of the third season, you can see why it would be a fit in the context of “Stranger Things.”

But "Stranger Things" doesn't use Bowie as Bowie. Rather, the show employs the Peter Gabriel cover, which has a story of its own. Gabriel’s version of  “Heroes” first appeared on his 2010 album “Scratch My Back,” in which he covered songs by artists like Arcade Fire, Bon Iver, Radiohead, Lou Reed, Paul Simon and Vampire Weekend (in a mildly ironic turn, Gabriel covered their song “Cape Cod Kwassa Kwassa” which features the lyric: "Feels so unnatural/ Peter Gabriel too”).

“Scratch My Back” wasn’t particularly well-received by critics.

In his review for “Pitchfork,” Mark Richardson wrote, “Every song on ‘Scratch My Back,’ regardless of its original tone or meaning, is flattened out and turned into this one melodramatic and depressing thing, often with Gabriel whispering half the words to go with the ultra-slow tempos.”

Of Gabriel’s cover of “Heroes,” Richardson wrote it was glacially slow and built to a single climax.

“Which affirms, like many failed takes before it, that the original is about 70% brilliant record and 30% brilliant song,” he wrote.

“Scratch My Back” was meant to serve as the start of a song swap. Gabriel envisioned a 2010 companion album called “I’ll Scratch Yours,” on which the artists he covered would, in turn, record one of his songs. The two albums were meant to be released simultaneously, but that process was marked by delays and detours. In the end, four artists who were covered on “Scratch My Back” — Radiohead, David Bowie, Neil Young, and Ray Davies — declined to participate in the swap.

Radiohead had signed on to cover “Wallflower,” but then dropped out. Gabriel sent his cover of "Street Spirit (Fade Out)” to Thom Yorke, and the code used to access the music showed the track had been played, but only once.

In a 2010 interview with The Guardian, Gabriel said: “[Yorke] said he hadn't listened [to it],but that seems very strange to me. It's pretty extreme, I guess. And I have heard since that the band didn't like what I did with it.”

At the time, Radiohead's record company declined to comment. (On the other holdouts: the Kinks' "Waterloo Sunset" only appeared as a bonus track; on Young, Gabriel told the Wall Street Journal, "Neil, I think, got too busy.")

Then in an interview with The Independent, Gabriel discussed what the media had dubbed “the David Bowie snub.”

"Sadly, David Bowie is the only artist that said he clearly didn't want to play with the song swap — I don't think he's doing much music at the moment,” Gabriel said. “Brian Eno was a co-writer on that so it gets around that problem.”

Eno, in turn, covered “Mother of Violence” on “And I’ll Scratch Yours,” the album of Gabriel covers that was finally released in 2013.

Yet, despite the fact that Gabriel’s cover of “Heroes” wasn’t well-loved by critics at the time, his version is the only one that would have suited the “Stranger Things” finale. Where Bowie’s version is anthemic, Gabriel’s is devastating. The slow crescendo, described by critic Mark Richardson, holds in it a certain duel truth: circumstances are really, really hard, but the only option is to keep moving forward. In this context, it’s a nod to the beloved characters of “Stranger Things,” and all they hope to overcome.