The three-year-old group, which has roughly 9,500 members, shared sexist comments and jokes about migrant deaths

By A. C. Thompson 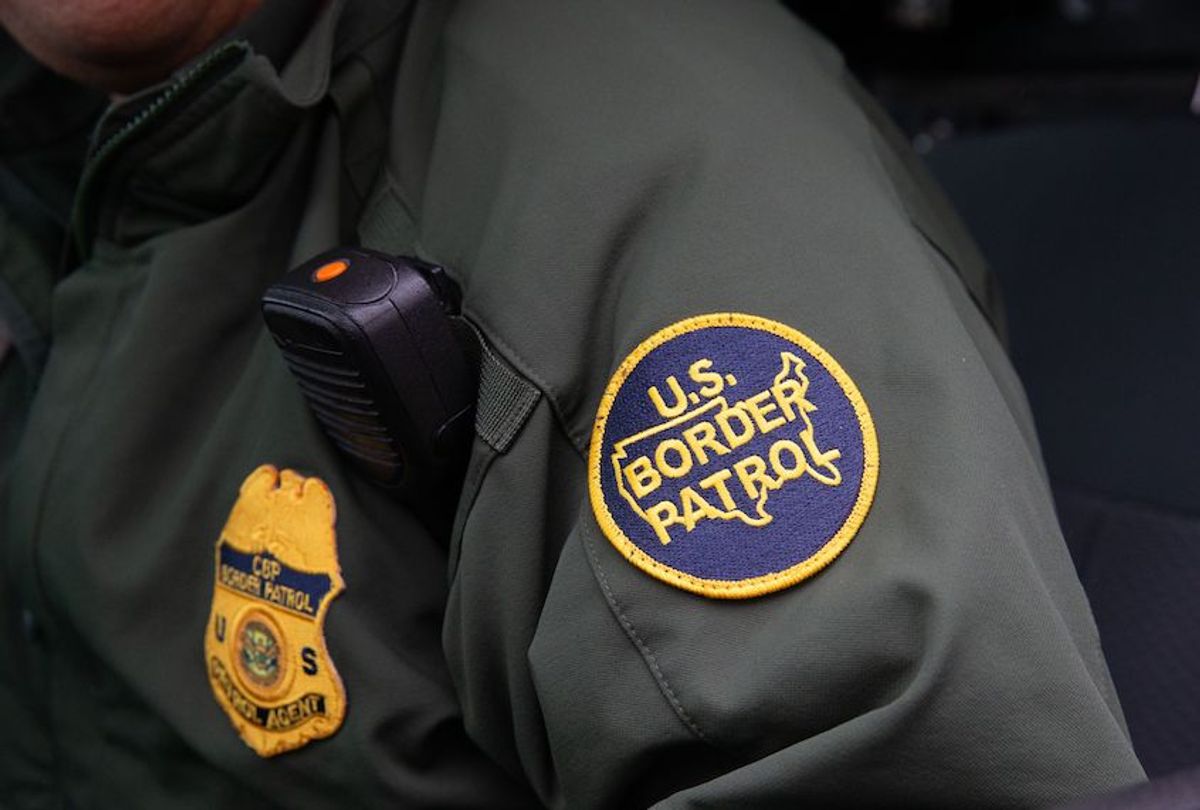 This photo shows a US Border Patrol patch on a border agent's uniform in McAllen, Texas, on January 15, 2019. (Suzanne Cordeiro/Afp/getty Images)
--

Members of a secret Facebook group for current and former Border Patrol agents joked about the deaths of migrants, discussed throwing burritos at Latino members of Congress visiting a detention facility in Texas on Monday and posted a vulgar illustration depicting Rep. Alexandria Ocasio-Cortez engaged in oral sex with a detained migrant, according to screenshots of their postings.

In one exchange, group members responded with indifference and wisecracks to the post of a news story about a 16-year-old Guatemalan migrant who died in May while in custody at a Border Patrol station in Weslaco, Texas. One member posted a GIF of Elmo with the quote, “Oh well.” Another responded with an image and the words “If he dies, he dies.”

Created in August 2016, the Facebook group is called “I’m 10-15” and boasts roughly 9,500 members from across the country. (10-15 is Border Patrol code for “aliens in custody.”) The group described itself, in an online introduction, as a forum for “funny” and “serious” discussion about work with the patrol. “Remember you are never alone in this family,” the introduction said. 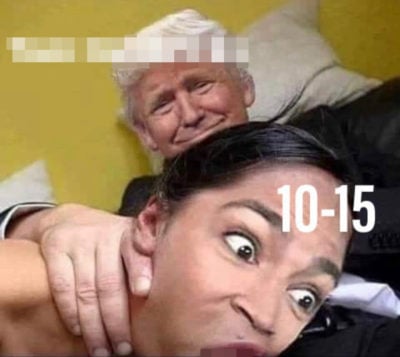 A screenshot from the Facebook group, run with this text: “That's right bitches. The masses have spoken and today democracy won. I have returned. To everyone who knows the real me and had my back I say thank you. To everyone else? This is what I have to say.....”

Responsible for policing the nation’s southern and northern boundaries, the Border Patrol has come under intense scrutiny as the Trump administration takes new, more aggressive measures to halt the influx of undocumented migrants across the United States-Mexico border. The patrol’s approximately 20,000 agents serve under the broader U.S. Customs and Border Protection agency, which has been faulted for allegedly mistreating children and adults in its custody. The agency’s leadership has been in turmoil, with its most recent acting chief, John Sanders, resigning last week.

ProPublica received images of several recent discussions in the 10-15 Facebook group and was able to link the participants in those online conversations to apparently legitimate Facebook profiles belonging to Border Patrol agents, including a supervisor based in El Paso, Texas, and an agent in Eagle Pass, Texas. ProPublica has so far been unable to reach the group members who made the postings.

ProPublica contacted three spokespeople for CBP in regard to the Facebook group and provided the names of three agents who appear to have participated in the online chats. CBP hasn’t yet responded.

“These comments and memes are extremely troubling,” said Daniel Martinez, a sociologist at the University of Arizona in Tucson who studies the border. “They’re clearly xenophobic and sexist.”

The postings, in his view, reflect what “seems to be a pervasive culture of cruelty aimed at immigrants within CBP. This isn’t just a few rogue agents or ‘bad apples.’”

A screenshot showing the title of the Facebook group, left, and the description.

The Border Patrol Facebook group is the most recent example of some law enforcement personnel behaving badly in public and private digital spaces. An investigation by Reveal uncovered hundreds of active-duty and retired law enforcement officers who moved in extremist Facebook circles, including white supremacist and anti-government groups. A team of researchers calling themselves the Plain View Project recently released a hefty database of offensive Facebook posts made by current and ex-law enforcement officers.

And in early 2018, federal investigators found a raft of disturbing and racist text messages sent by Border Patrol agents in southern Arizona after searching the phone of Matthew Bowen, an agent charged with running down a Guatemalan migrant with a Ford F-150 pickup truck. The texts, which were revealed in a court filing in federal court in Tucson, described migrants as “guats,” “wild ass shitbags,” “beaners” and “subhuman.” The messages included repeated discussions about burning the migrants up.

Several of the postings reviewed by ProPublica refer to the planned visit by members of the Congressional Hispanic Caucus, including Ocasio-Cortez and Rep. Veronica Escobar, to a troubled Border Patrol facility outside of El Paso. Agents at the compound in Clint, Texas, have been accused of holding children in neglectful, inhumane conditions. 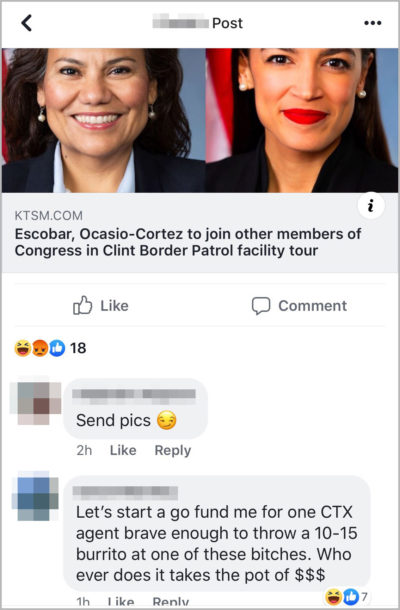 A screenshot of one of the posts in the Facebook group.

Members of the Border Patrol Facebook group were not enthused about the tour, noting that Ocasio-Cortez, a Democrat from Queens, had compared Border Patrol facilities to Nazi concentration camps. Escobar is a freshman Democrat representing El Paso.

One member encouraged Border Patrol agents to hurl a “burrito at these bitches.” Another, apparently a patrol supervisor, wrote, “Fuck the hoes.” “There should be no photo ops for these scum buckets,” posted a third member.

Another is a photo illustration of a smiling President Donald Trump forcing Ocasio-Cortez’s head toward his crotch. The agent who posted the image commented: “That’s right bitches. The masses have spoken and today democracy won.”

The posts about Escobar and Ocasio-Cortez are “vile and sexist,” said a staffer for Escobar. “Furthermore, the comments made by Border Patrol agents towards immigrants, especially those that have lost their lives, are disgusting and show a complete disregard for human life and dignity.”

The head of the Congressional Hispanic Caucus, Joaquin Castro, reviewed the Facebook discussions and was incensed. “It confirms some of the worst criticisms of Customs and Border Protection,” said Castro, a Democrat who represents San Antonio. “These are clearly agents who are desensitized to the point of being dangerous to migrants and their co-workers.” He added that the agents who made the vulgar comments “don’t deserve to wear any uniform representing the United States of America.” 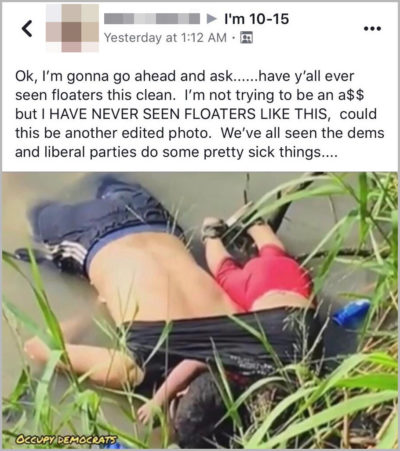 Vicki Gaubeca, director of the Southern Border Communities Coalition, said the postings are more evidence of the sexism and misogyny that has long plagued the Border Patrol. “That’s why they’re the worst at recruiting women,” said Gaubeca, whose group works to reform the agency. “They have the lowest percentage of female agents or officers of any federal law enforcement agency.”

In another thread, a group member posted a photo of father and his 23-month-old daughter lying face down in the Rio Grande. The pair drowned while trying to ford the river and cross into the U.S.; pictures of the two have circulated widely online in recent days, generating an outcry.

The member asked if the photo could have been faked because the bodies were so “clean.” (The picture was taken by an Associated Press photographer, and there is no indication that it was staged or manipulated.) “I HAVE NEVER SEEN FLOATERS LIKE THIS,” the person wrote, adding, “could this be another edited photo. We’ve all seen the dems and liberal parties do some pretty sick things…”

MORE FROM A. C. Thompson