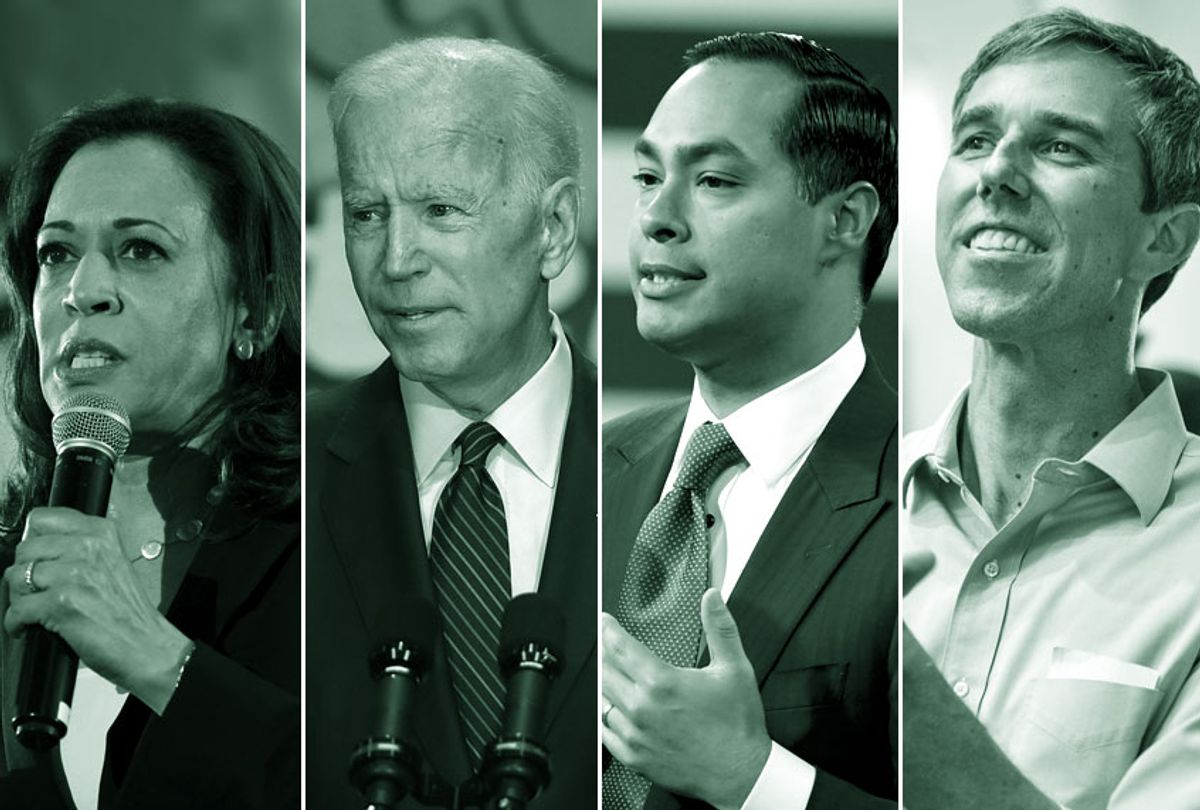 Counting the commercials, the Democratic debates lasted four hours. The four minutes in which Kamala Harris took down Joe Biden like a lion on a gazelle have eclipsed all other memory of them and come close to scrambling the field. Last week in Salon, I asked why no one had asked Harris how her views on busing differed from Biden’s. It seemed a fair, even obvious question.

Since then, some reporters have pressed for an answer. At first, Harris surrogates said busing wasn’t the point, but in Miami it was her money line: “Mr. Vice President, do you agree today that you were wrong to oppose busing then?” Then Harris’ campaign said she supports busing, but cited only her support of a bill that has some federal money for voluntary local busing, which was never at issue.

Ten days later, Harris still won’t say if she supports court-ordered busing to remedy de facto school segregation. It’s an awkward time to admit she doesn’t, but that’s the only inference left to draw: Harris’ position on busing today is the same as Biden’s was 45 years ago. It casts her big moment in a different light. It also begs us to think about how we talk about race, especially in election season.

The night before Harris went after Biden, Julián Castro took out Beto O’Rourke in much the same style. Castro’s racially charged issue was immigration. O’Rourke was ticking off a list of progressive policy proposals and acquitting himself fairly well when Castro interrupted to instruct him that

… the reason they’re separating little children from their families is they’re using section 1325 … which criminalizes coming across the border to incarcerate the parents and separate them. Some of us… have called to end that section. … Some, like Congressman O’Rourke, have not.

There’s some history between the two, in that Castro resents O'Rourke for gaining celebrity by challenging Sen. Ted Cruz in a race that Castro ducked. Castro’s rudeness — if O’Rourke weren’t so lazy, he’d agree with him — must have bothered someone besides Beto and me, but a Politico headline read simply, "Castro decks Beto." Harris was ruder in her patronizing and highly provisional assurance to Biden: “I don’t believe you’re a racist.” No one in the press picked up on that either, but then neither did Biden.

Those attacks were effective in reinforcing impressions of Biden as old and out of touch and O’Rourke as a lightweight. But I believe they came at a cost to Castro and Harris and the larger Democratic cause. Watching both encounters, I felt as if I were watching busing and immigration being used by Democrats as wedge issues against one another. It’s a bad business for anyone to be in, but especially them.

We naturally associate the concept of wedge issues with Republicans, who own the patent on it. I don’t equate what I saw in the debates to Republican attempts to peel off Democratic votes by blowing racist or sexist dog whistles. But the reason all wedge issues are cultural — no one ever got blown off the face of Twitter for siding with big banks — is that issues of race, gender and sexual identity are highly combustible and must therefore be handled with care. All weaponizing of such issues is destructive.

I wrote last week that social liberalism is part of a new American consensus. It isn’t always easy to see, what with Trump drawing so many racists outdoors and maybe even increasing their numbers. But on issues from marriage equality to reproductive rights to gun safety to racial discrimination, upwards of 60% of all voters are liberals. It is the most liberal social consensus in American history.

That consensus extends to immigration. Most voters abhor Trump’s immigration policies. If Democrats win the White House and Senate, they may, with the public’s full blessing, put a stop to the wall, dissolve ICE, end family separations, surge judges to the border, rescue dreamers, offer a path to citizenship for 12 million undocumented immigrants and pump aid into Guatemala, Honduras and El Salvador. In my adult life, I can’t recall a more sweeping progressive victory than that.

Note, however, that ginning up anti-immigrant hysteria is a main ingredient in the not-so-secret sauce of fascism. Also note that voters care deeply for the rule of law, and that their concerns about drug smuggling, human trafficking and terrorism are real and legitimate. It’s why "OPEN BORDERS!” lands just behind "FAKE NEWS!" on Trump’s Twitter hit parade.

To deliver their consensus immigration agenda, all Democrats need to do is remind voters of their commitment to border security and the rule of law. Trump has weakened border security. The last two Democratic presidents strengthened it. All the presidential candidates are foursquare for it. Here’s Kamala Harris, during a CNN town hall:

Democrats are for border security, but rarely volunteer that information. They need only state, on a semi-regular basis, their belief that all entry into the country must be lawful, and mention steps they would take to ensure that it is. The eventual nominee will have to do this, of course, but better to start now. Candidates who fear seeing their names knitted in a scarf by some Madame Defarge of wokeness need to get over it. Trump thinks that "open borders" is the biggest card he has to play. Knowing that should be incentive enough.

I don’t know what Castro’s attack on O’Rourke did to either man’s limited chances of becoming president of the United States. I do know it prompted a major post-Miami uptick in "Democrats are for open borders" stock. Castro says getting Congress to repeal the statute is the only way to ensure an end to family separation. For sure that’s the slow way. The fast way is to beat Trump.

Social issues need the kind of patient dialogue for which elections are not known. If Castro really thinks this election is the right venue in which to introduce the idea of decriminalizing most border crossings, he should explain the idea in an op-ed, not use it as a club to bloody an opponent. It’s a duty we owe the values we profess.

Were it not for Kamala Harris’ furious backpedaling, Miami might also have prompted an uptick in "Democrats are for busing" stock.  It may yet, despite the fact that in the 40 years since the busing wars, I’ve not heard one politician call for court-ordered busing as a remedy for school segregation, including Harris.

Having read Lara Bazelon’s searing critique of Harris’ service as district attorney and attorney general, I would not have picked her to be first to raise the issue. I suppose the "Kick me" sign on Joe Biden’s fanny was too tempting. Everything she has said on the topic since then has been contradictory and confused.

Harris unfairly implied that Biden burnishes the reputations of segregationists, but says she proudly seeks common ground with today’s Republicans, who she feels are less racist than the Southern Democrats of Biden’s youth. (Maybe; maybe not.) She says she’d have stood up for court-mandated busing then, but times have changed. Depending on how one does the math, there may be slightly fewer black children in de facto segregated schools today, but the moral accounting is exactly the same.

As with immigration, there is wide consensus on racial discrimination in America. A Democratic president and Congress could restore the Voting Rights Act based on legislative findings that even this Supreme Court would be hard pressed to ignore. Even Trump and Mitch McConnell acceded to minimal progress on prison reform. Think what Democrats could do in every aspect of criminal justice reform.

There is consensus as well for measures that while not strictly racial would go far to lift America’s working poor. It’s been 60 years since the country was so ready to fund public housing. A living wage adjusted for inflation would be one of the greatest redistributions of income ever achieved.  A mass infrastructure program and relentless transition to renewable energy would provide many disadvantaged young people with not just a "jobs program" but lifetime careers. It’s the chance of a lifetime.

With all that and Trump to talk about, Democrats steered the conversation in other directions. They should steer it back now. They could start by elevating the tone. Harris might even apologize to Biden for throwing so much shade, though if she decides to wait till Biden apologizes to Anita Hill, that would be OK too.

All should be made to focus as much as Bernie Sanders and Elizabeth Warren do on the decline and fall of the American middle class — and the rigged system responsible for it. Trump runs the most corrupt administration in history, but in Miami the topic barely came up. The economy really is going gangbusters. That so much of the middle class is still falling behind proves how broken the system is. That didn’t come up much either.

In addressing the corruption of our political economy, candidates needn’t worry about bringing the audience along; the public’s way ahead of them. Here we need more confrontation. Biden says we shouldn’t pore over the past. I’ll spot him the whole 20th century, but I’d like to know what he said when his good friend the previous president chose not to raise the minimum wage, or when he threw in the towel on the public option in the Affordable Care Act. I’d also like to know what Biden meant when he assured his Wall Street donors that "nothing would fundamentally change" for them under his presidency.

Given Biden's years of loyal service to the Delaware-centric banking industry, I’d especially like to ask him where he stands on Bernie Sanders’ and Alexandria Ocasio-Cortez’s Loan Shark Prevention Act, which is meant to end the banks’ parasitical preying on consumers and force them back to the job of investing in communities. But every candidate who is working Wall Street for donations needs to be pinned down on that one, not just Biden.

It turns out Democrats are more reliable on race than on crony capitalism and pay-to-play politics. If they were as brave in standing up to their donors as they are in standing up to bigotry, we wouldn't be where we are. When donor relations superseded Democrats' relationship to the working and middle class, they forgot how to speak the languages of both economic populism and social liberalism. They’ve got a few months till the biggest fight of their lives to relearn both.