The appeals court called the lawsuit against Trump "attenuated and abstract" 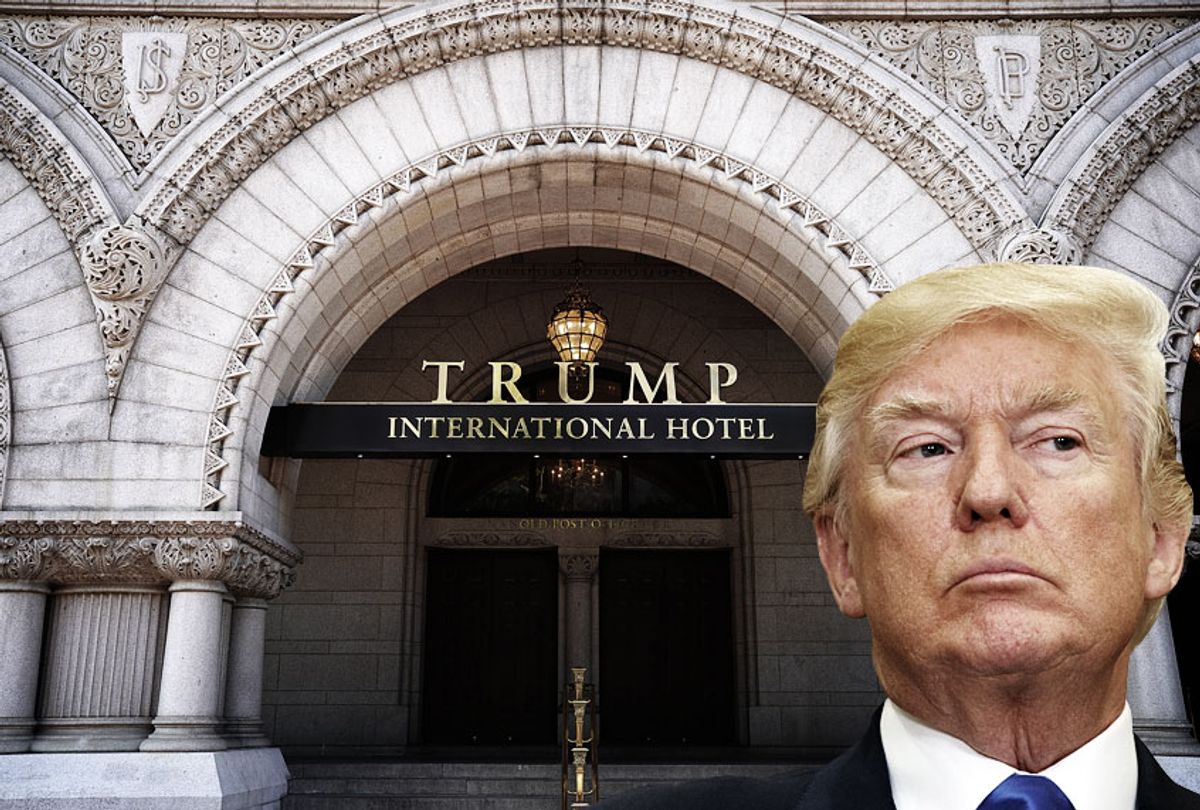 A federal appeals court on Wednesday sided with President Donald Trump, dismissing a federal lawsuit brought by the state of Maryland and the District of Columbia claiming that the president is illegally profiting from foreign and domestic officials who stay at his Washington hotel.

The U.S. Court of Appeals for the Fourth Circuit unanimously ruled that the Democratic attorneys general of Maryland and the District of Columbia — who joined together in 2017 to file the lawsuit against Trump — lacked legal standing in accusing the president of violating anti-corruption provisions in the emoluments clauses of the U.S. Constitution.

The emoluments clause is little-known provision of the Constitution that prohibits public officials from accepting gifts or payments from states or foreign governments without congressional approval.

"The District and Maryland's interest in enforcing the Emoluments Clauses is so attenuated and abstract that their prosecution of this case readily provokes the question of whether this action against the president is an appropriate use of the courts, which were created to resolve real cases and controversies between the parties," Judge Paul Niemeyer wrote in his opinion on behalf of the three-judge panel.

The appeals court rejected the attorneys generals' argument that Trump's hotel diverted business from similar properties in their jurisdictions.

"There is a distinct possibility — which was completely ignored by the District and Maryland, as well as by the district court — that certain government officials might avoid patronizing the hotel because of the president’s association with it," Niemeyer wrote.

"Even if government officials were patronizing the hotel to curry the president's favor, there is no reason to conclude that they would cease doing so were the president enjoined from receiving income from the hotel. After all, the hotel would still be publicly associated with the president, would still bear his name and would still financially benefit members of his family," he added.

Trump quickly celebrated Wednesday's ruling and appeared to embrace the court's suggestion that the presidency could hurt Trump's businesses.

"Word just out that I won a big part of the Deep State and Democrat induced Witch Hunt," Trump wrote on Twitter. "Unanimous decision in my favor from The United States Court of Appeals For The Fourth Circuit on the ridiculous Emoluments Case. I don't make money, but lose a fortune for the honor of ....serving and doing a great job as your President (including accepting Zero salary!)."

The president's attorney, Jay Sekulow, also praised the court's ruling, which he called a "complete victory." He added, "This latest effort at presidential harassment has been dismissed with prejudice."

"We are pleased that the Fourth Circuit unanimously decided to dismiss this extraordinarily flawed case," Justice Department spokeswoman Kelly Laco said in a statement. "The court correctly determined that the plaintiffs improperly asked the courts to exceed their constitutional role by reviewing the president’s compliance with the Emoluments Clauses."

Since Trump clinched the presidency, the Trump International Hotel in Washington has emerged as a particular source of controversy, as it has become a magnet for lobbyists, foreign governments and organizations friendly to the president's agenda, who have given the appearance of gathering at the establishment in an attempt to curry favor with the administration. The luxury hotel is located mere blocks from the White House.

Maryland and D.C. had some initial wins in the case, including when a federal judge in Maryland ruled that the lawsuit could move forward. Trump appealed that ruling to the Fourth Circuit.

The three judges who heard the appeal were nominated to the Fourth Circuit by Republican presidents: Niemeyer, by George H.W. Bush; Dennis Shedd, by George W. Bush; and Marvin Quattlebaum, by Trump.

The attorneys general for Maryland and D.C. dismissed the court's ruling and vowed to continue to scrutinize president for his alleged violations of the Constitution's emoluments clause.

"We think that this panel of the Fourth Circuit Court of Appeals got it wrong. Although the court described a litany of ways in which this case is unique, it failed to acknowledge the most extraordinary circumstance of all: President Trump is brazenly profiting from the Office of the President in ways that no other president in history ever imagined and that the founders expressly sought — in the Constitution — to prohibit," attorneys general Karl Racine of D.C. and Brian Frosh of Maryland wrote in a joint statement.  "We have not and will not abandon our efforts to hold President Trump accountable for violating the Nation's original anti-corruption laws."

"All Americans suffer when our chief executive is vulnerable to corrupt foreign influence," they continued. "The idea that the District of Columbia and Maryland are not harmed by the president’s violation of the Constitution is plain error. We will continue to pursue our legal options to hold him accountable."