How far will Republicans go to destroy democracy? And can they still be stopped?

Do Republicans value democracy or the rule of law? The answer is clear, but there's still time to fight back 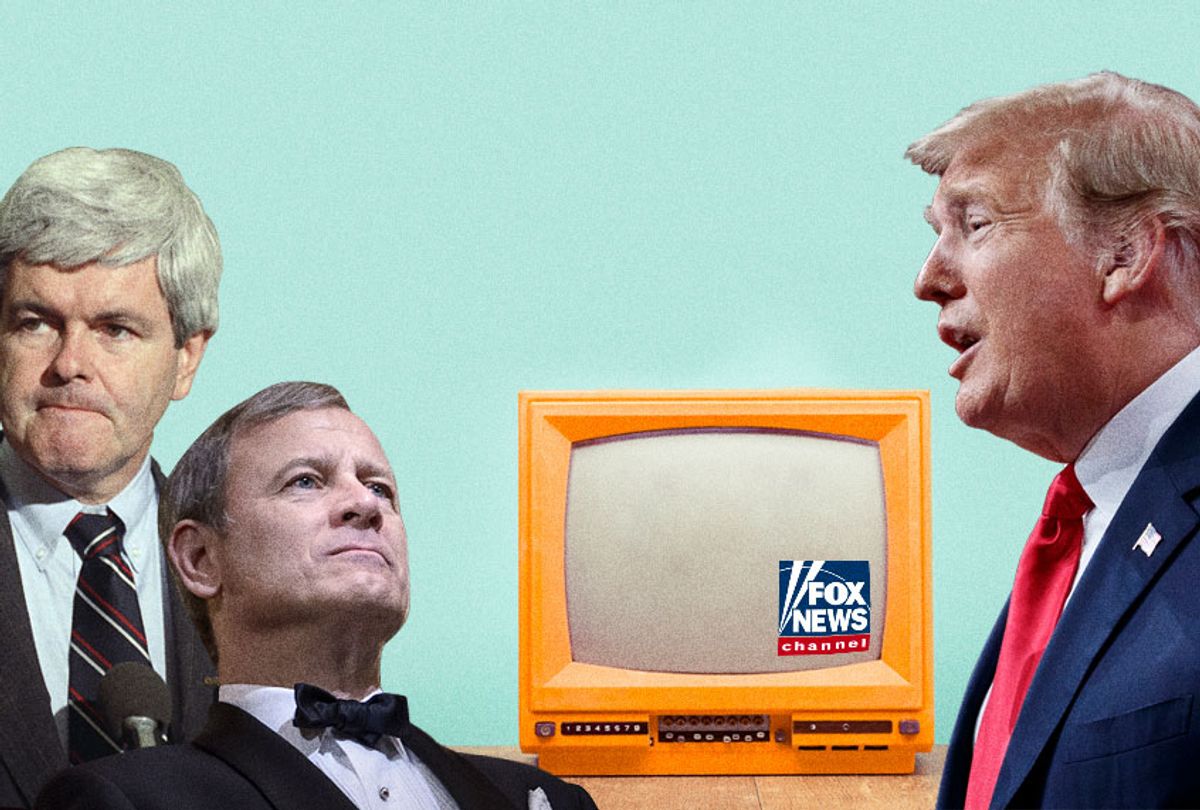 Even before the latest Supreme Court decisions approving hyper-partisan gerrymandering and effectively allowing the addition of a citizenship question to the census, experts have wondered aloud whether Republicans remain committed to democracy. Toward the end of a recent plenary panel on Supreme Court reform at the American Constitution Society’s national convention, University of Chicago law professor Aziz Huq suggested, “We don’t really know how committed the Republican Party is to the project of democracy.”

If the GOP still values the rule of law, then perhaps the danger to democracy will recede after President Trump leaves office. But if the GOP no longer cares about democracy, then our political system could be in peril. Democracy probably cannot survive, after all, if one of our two major political parties is indifferent to its fate.

Unfortunately, the answer to Huq’s question is clear. The Republican Party is not at all committed to democracy, and GOP leaders and voters would happily tolerate alternative political arrangements. That is a worrisome claim, to be sure, but the evidence is indisputable. Republicans have abandoned any concerns they may have had for the integrity of our political system.

First, as is well understood, the GOP spent the past generation undermining the foundations of democracy — free and fair elections — so as to reinforce white rule. Thanks to the GOP’s commitment to voter suppression, paired with decades of phony rhetoric about voter fraud, millions of black and brown Americans have no access to the ballot box. Due to the Supreme Court’s evisceration of campaign finance law, unlimited and unaccountable dark money floods our politics.

Sophisticated redistricting software enables Republicans to force Democrats to waste millions of votes, leading to highly skewed electoral outcomes. These decades-long assaults required systematically coordinated tactics, such as the 50-year campaign that led to the Supreme Court’s dismantling of the Voting Rights Act. The evisceration of democracy is no accident.

Second, the GOP is structurally committed to lying. “Structurally committed” means that party leaders have little if any choice in the matter. They have to lie. And this has nothing to do with Donald Trump. One of the first things that Newt Gingrich's Republican House majority did upon assuming power in 1995 was to undermine evidence-based policy by killing the Office of Technology Assessment and slashing the funding of the Congressional Research Service and Government Accountability Office.

Why? Republicans must disavow factual evidence because neither wing of the party (the corporate wing or the resentment wing) can tell the truth about what it stands for. The corporate wing cannot admit that it cares exclusively about tax cuts for the rich and corporate deregulation, so it has to lie about what it does. That’s why the 2002 handout to oil, gas and coal companies was called the “Clear Skies Initiative.” That’s why the 2009-2010 health care debate was framed in terms of “death panels,”as if private insurance does not ration care. That’s why the 2017 tax cut for corporations and elites was sold as a middle-class tax cut.

Nor can the resentment wing of the GOP speak honestly about the paranoid basis of its preferences. (Interestingly, Donald Trump occasionally comes close, such as when he refers to Mexicans as “rapists.”) Gun enthusiasts cannot admit that they like firearms because they fear black people. "Pro-lifers" cannot admit that they oppose abortion because they are afraid of what would happen if women controlled their bodies. (If they truly supported life, after all, they would fight climate change).

Third, the GOP has paved the way for the collapse of civilization due to climate change. While it is difficult, psychologically, to confront what’s at stake, some experts have concluded that we have already passed the point at which the collapse of humanity is inevitable, and that civilizational collapse will occur soon. The GOP, of course, has resisted mitigation of the climate crisis for decades. Even the most despicable regimes on earth, such as Syria’s, have signed onto the Paris agreement, but the GOP continues to do everything in its power to obstruct even modest reforms. The collapse of civilization will be worse than genocide, yet the GOP is happy to enable it. If a political party is willing to facilitate an outcome worse than genocide, then why would it oppose authoritarianism? The answer is that it would not.

President Trump, of course, poses an extreme threat to the rule of law. But President Trump is not the root of the problem. Nor is the GOP’s willingness to destroy "democratic norms" the root of the problem. Both Trump and GOP norm-breaking are symptoms, not causes. The root of the Republican radicalism is the triangular relationship among capital (e.g., the Koch brothers), the right-wing media (e.g., Fox News), and resentment voters (whom Hillary Clinton accurately labeled “deplorables”), the latter being the roughly 40 percent of the public who still believe Trump is doing a good job.

Long after Trump leaves the scene, Fox News will continue to manufacture paranoia to motivate resentment voters to vote for capitalists who will head to Washington to lower taxes, deregulate the economy and undermine democracy. The GOP’s capital wing cares about tax cuts and deregulation and, thanks to Fox News, has an unlimited capacity to manufacture paranoia. Its resentment wing cares about making scapegoats suffer, and has an unlimited capacity for consuming paranoia. Neither wing cares about anything else. Not fairness. Not national interest. Not democracy. Not the rule of law. From this perspective, Trump’s presidency is a gift that exposes how the machinery of the GOP works and what’s at stake in its operation.

Many progressives entertain a fantasy that the GOP can be de-radicalized at the ballot box. After all, only 40 percent of the electorate supports Trump. Crooked Media’s Jon Lovett summarized this view before last year’s midterms: “There is only one thing we can do, which is stamp out this form of Republicanism, defeat it completely and govern without them until they learn that there’s a price to be paid for the kind of politics they’ve practiced.”

Unfortunately, however, the GOP cannot be de-radicalized at the ballot box. Democrats already thrashed the GOP in wave elections in 1992, 2006, 2008 and 2018, yet after each election, the Republican Party became even more radical. After its 2012 defeat, the GOP even concluded in a self-administered autopsy that it needed to de-radicalize — and then lined up behind Trump just a few years later.

Even the most mild-mannered Republican, such as Sen. Susan Collins of Maine or former Ohio Gov. John Kasich, must govern, once in office, as a radical, no matter how sweet their smile or how gentle their manner. They are just as captured by the triangular relationship between capital, right-wing media and resentment as their more explicitly frothy colleagues. Brett Kavanaugh, after all, hails from the genteel, country club wing of the GOP, yet it took no time at all for him to unveil his radicalism, in both style and substance, at his confirmation hearing.

Nor does it matter that Republicans occasionally do the right thing. Even the worst tyrants occasionally behave reasonably, but that doesn’t make them less dangerous. As a participant in campaigns to allow LGBT troops to serve in the military, I have been heartened by occasional GOP support for inclusion. What’s important to keep in mind, however, is that even when a particular GOP scapegoat acquires mainstream tolerance and even acceptance, the Republican paranoia machine simply shifts focus by emphasizing different phony threats: migrant caravans, black crime, uppity women or Muslim immigrants, depending on the electoral cycle.

What this means, now that the GOP has stolen the Supreme Court, is that if Democrats fail to take dramatic action in 2021, it will not matter if they occasionally win elections, because Republicans will continue to control the country, even when they are not in power:

If corrective action is not taken soon, white minority rule could endure for decades, if not longer. Even though Republicans may lose elections from time to time, democracy effectively will be dead. Under this scenario, the country could even experience a real or manufactured crisis, prompting lawless GOP leaders to suspend the Constitution. At that point, all bets will be off.

Thanks to demographic trends, it will soon be all but impossible for Democrats to win a majority in the U.S. Senate. There is, however, a reasonable remedy on the table, and one last chance to un-rig the system and restore democracy. If Democrats hold the House of Representatives in 2020 and manage to capture the White House and Senate, they can (according to the Brennan Center) add up to 50 million voters to the rolls if they enact an aggressive version of HR 1, the democratization bill that House Democrats passed as their first order of business upon returning to power this year.

The expanded version of HR 1 would need to mandate an automatic right to vote, automatic voter registration, election holidays and early voting; enfranchise ex-offenders; provide a quick path to citizenship for all law-abiding immigrants as well as statehood for Washington, D.C., and Puerto Rico; and ban voter suppression, dark money and gerrymandering. In order to pass such a law, Democrats would need to kill the filibuster. In order to give the law a chance to endure, Democrats would need to expand the Supreme Court, because the current court will not let Congress restore democracy.

A growing chorus of leaders and voters recognize that democracy is dying, and that institutional reform is necessary to restore it. If Democrats pull off a hat trick in 2020, and if party leaders are fearless about enacting all three components of the democracy agenda — killing the filibuster, expanding the Supreme Court and enacting an aggressive version of HR 1 — then the system can be un-rigged and the rule of law can be restored before it’s too late. Otherwise, we’re probably done as a democracy.