"They are the best in the world and deserve to be paid accordingly," Sen. Joe Manchin said of the U.S. women's team 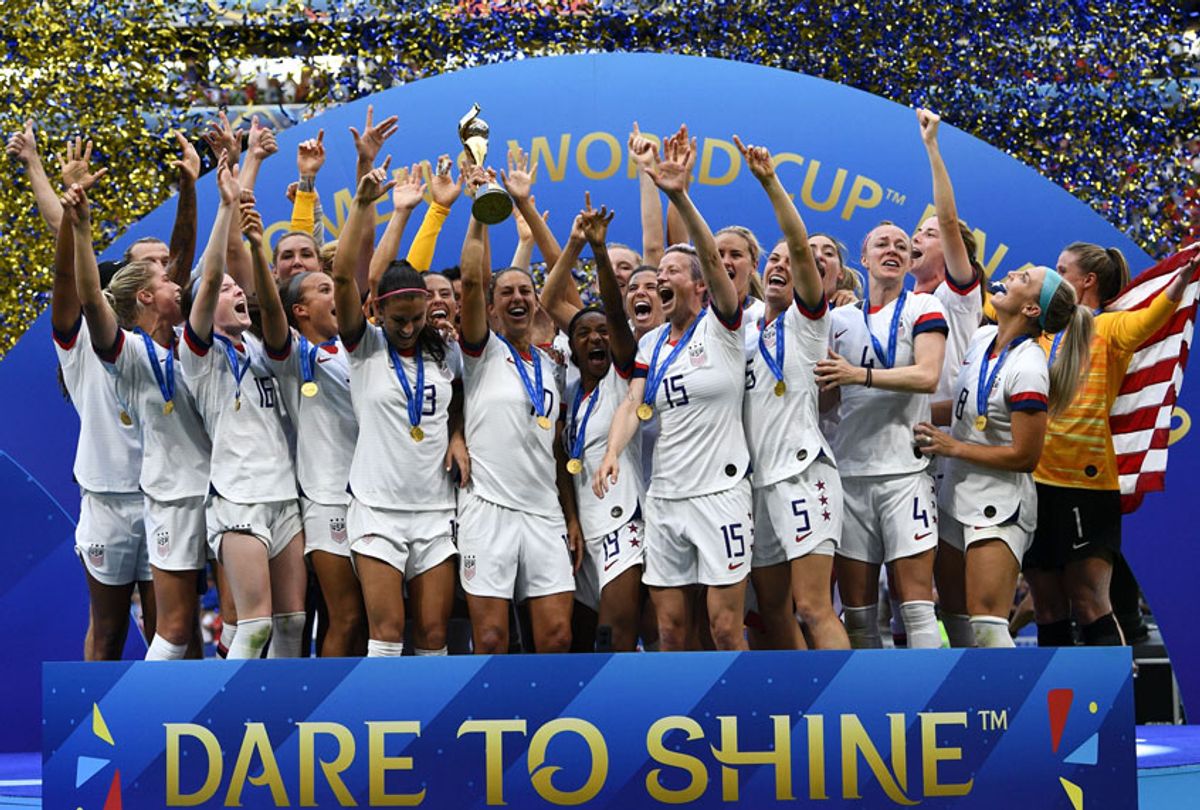 USA's players celebrate with the trophy after the France 2019 Womens World Cup football final match between USA and the Netherlands, on July 7, 2019, at the Lyon Stadium in Lyon, central-eastern France. (Getty/FRANCK FIFE)
--

Democratic Sen. Joe Manchin of West Virginia introduced a bill Tuesday that would withhold federal funding for the 2026 World Cup — the men's soccer tournament, which the U.S. is scheduled to host — unless the U.S. Soccer Federation agrees to pay its men's and women's soccer teams equally.

The proposed legislation comes in the wake of the U.S. Women's National Team's (USWNT) historic performance at the 2019 Women's World Cup on Sunday. The victory in Lyon, France, in which the USWNT ultimately beat the Netherlands 2-0, marked the team's fourth world title after it took home the trophy in 1991, 1999 and 2015.

Manchin said he was inspired to sponsor the legislation after receiving a letter from West Virginia University's women's soccer head coach Nikki Izzo-Brown, who asked the senator to support the national women's team in their pursuit of equal pay.

"The clear unequitable pay between the U.S. men's and women's soccer teams is unacceptable, and I'm glad the U.S. Women's Soccer Team latest victory is causing public outcry," Manchin said in a statement. "They are the best in the world and deserve to be paid accordingly."

Manchin's proposed bill would ensure that "no federal funds may be appropriated or otherwise made available to provide support for the 2026 World Cup," which the U.S. will co-host along with Canada and Mexico, until the U.S. Soccer Federation agrees to pay members on the men's and women's teams equally.

The measure would also cut funding to the host cities and all participating organizations, including the U.S. Soccer Federation; Confederation of North, Central American and Caribbean Association Football (CONCACAF); and the Fédération Internationale de Football Association (FIFA).

Izzo-Brown's letter to Manchin pointed out that the women's team makes a profit, while the men's national team, who failed to qualify for the 2018 World Cup, "made a net loss."

"The inequality of pay is unjust and this wage gap with the US men's national team has to stop," Izzo-Brown wrote. "The women have won four titles, men none; the women's viewership in the FIFA World Cup final outdrew the men in the United States by over three million (men 11.4 , women 14.3)."

Prior to the World Cup, the U.S. women's team accused the U.S. Soccer Federation of allegedly engaging in "institutionalized gender discrimination," which they argued was reflected in differences in pay, coaching, medical care and travel arrangements. The lawsuit was filed on International Women's Day.

The soccer federation and the 28 women's national team players suing it for pay discrimination agreed to mediation last month. The process is expected to begin now that the World Cup is over.

The U.S. women's victory on Sunday revived the debate over pay equity in sports. Crowds in France began to chant "equal pay" in support of the women's team at the close of the game.

You can watch the full interview below: