Omar, one of the first Muslim women to be elected to Congress, had sharp words for the Fox News darling 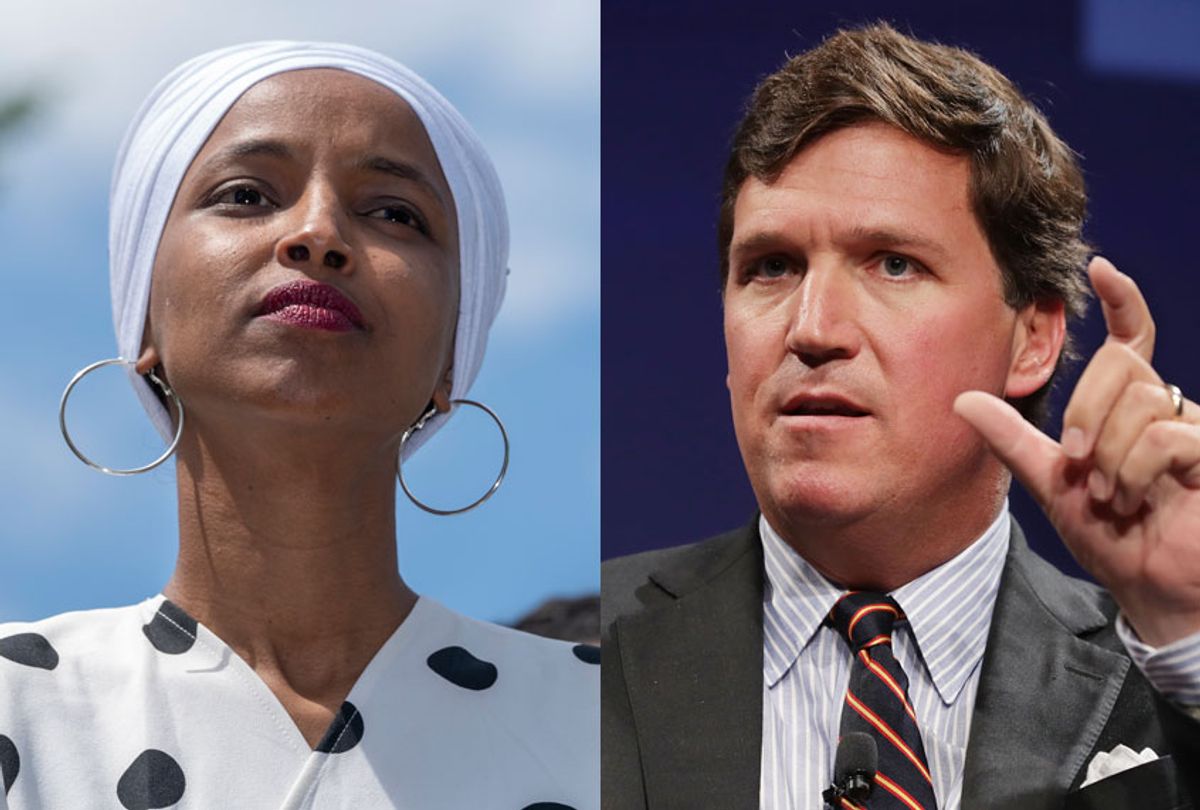 Rep. Ilhan Omar, D-Minn., called Fox News host Tucker Carlson a "racist fool" on Tuesday night after he criticized her on his primetime show and declared that she "hates America."

Carlson, whose comment last year that immigration makes the United States "poorer and dirtier" prompted an advertiser boycott, dismissed the freshman congresswoman as "living proof that the way we practice immigration has become dangerous to this country."

Omar was born in Somalia. She and her family fled the war-torn country when she was eight years old and lived in a refugee camp in Kenya for four years before arriving in the United States. The lawmaker was 12 years old when her family immigrated to the U.S. and settled in Minneapolis.

Carlson cited this granting of asylum as evidence of America's generosity and argued that Omar is ungrateful.

"After everything that America has done for Omar, and for her family, she hates this country more than ever," Carlson claimed.

He cited a recent profile of Omar in The Washington Post that described the lawmaker's view of the United States as a country that has "failed to live up to its founding ideals, a place that had disappointed her and so many immigrants, refugees and minorities like her."

"Virtually every public statement she makes accuses Americans of bigotry and racism. This is an immoral country, she says. She has undisguised contempt for the United States and for its people," Carlson said. "That should worry you, and not just because Omar is now a sitting member of Congress. Ilhan Omar is living proof that the way we practice immigration has become dangerous to this country. A system designed to strengthen America is instead undermining it."

Carlson then speculated: "Maybe we are importing people from places who are simply antithetical to ours."

"No country can import large numbers of people who hate it and expect to survive," Carlson added. "The Romans were the last to try that, with predictable results. So, be grateful for Ilhan Omar, annoying as she is. She's a living fire alarm, a warning to the rest of us that we better change our immigration system immediately, or else."

Omar, one of the first Muslim women to be elected to Congress, quickly responded to the Fox News host's attacks on Twitter: "Not gonna lie, it's kinda fun watching a racist fool like this weeping about my presence in Congress."

The Minnesota Democrat added two crying laughter emojis and stated, "No lies will stamp out my love for this country or my resolve to make our union more perfect. They will just have to get used to calling me Congresswoman!"

Her tweet was a reply to a short clip of Carlson's segment, which was posted Tuesday night by Andrew Lawrence, a staffer at the progressive media watchdog Media Matters for America. Lawrence described Carlson's Tuesday night commentary on Omar as "an absolutely stunning racist attack."