Can Amy McGrath take down Mitch McConnell? Maybe not — but Democrats still could

Why are most national Democrats, including the 2020 candidates, already conceding the Senate to Republicans? 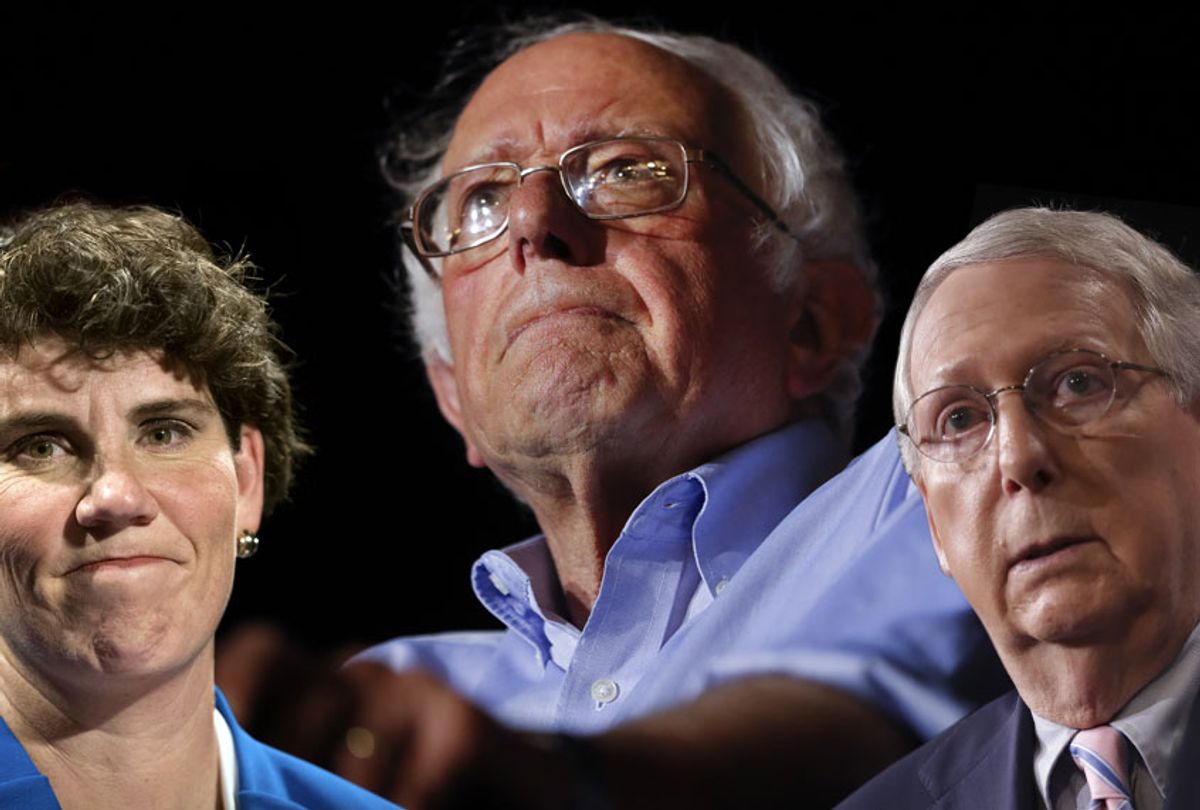 Former fighter pilot Amy McGrath’s Tuesday announcement that she would run against Senate Majority Leader Mitch McConnell for his Kentucky seat R-Ky., was welcomed by more than $2.5 million in donations in the first 24 hours — and near-universal dismissal from election forecasters and political pundits.

As New York Times statistician Dave Wasserman tweeted: "Folks, there is just no amount of $$$ that is going to elect a Dem to federal office next fall in a place that voted for Trump by 30%.”

Donald Trump did indeed carry the Bluegrass State by 30 points in 2016 and still has an approval rating there that is positive by more than 15 points. McGrath lost her first bid for office two years after that, being narrowly defeated by incumbent Republican Rep. Andy Barr in the state’s 6th congressional district. To Wasserman’s point, McGrath raised $8 million for that race, while Barr raised only $5 million, and lost by 10,000 votes.

Still, that was a pretty impressive result in a district the Cook Political Report rated "R+9," and the best performance for any Democrat in that district over the last five electoral cycles.

McConnell is a strange and polarizing figure, even in Kentucky. He has the worst approval ratings of any incumbent senator in the country, relative to his state's partisan lean, but no one doubts he will be a strong candidate. He has held his seat for 34 years, and easily won re-election in the low-turnout midterms of 2014, beating former Kentucky secretary of state Alison Lundergan Grimes by 16 percentage points, or around 220,000 votes. Nearly 2 million eligible Kentuckians did not bother to vote.

Kentucky has tended to support Democrats more often for statewide office than federal office. (Until Matt Bevin won the governorship four years ago, only one Republican had served as the state’s top executive in the previous 44 years.) It is at least conceivable that a concerted and focused get-out-the-vote campaign in the Democrat-rich cities of Lexington, Louisville and Bowling Green could push McConnell off his throne.

As everyone in American politics understands, that could be crucial. Even if a Democratic nominee successfully defeats Donald Trump in November 2020, there will be no path forward for a Democratic agenda if McConnell still controls the Senate.

Based on her curious campaign kickoff, McGrath appears to be hedging her bets on Trump. She almost seems to presume that he'll still be in the White House, suggesting that removing McConnell can help the president fulfill his promises to the working-class voters who supported him. McGrath also gave two different answers on the same day about whether she would have voted to confirm Supreme Court Justice Brett Kavanaugh, first telling the Louisville Courier-Journal she "probably would have voted for him" and then — after a chorus of outrage from Democrats — taking to Twitter to say that "upon further reflection and further understanding of his record, I would have voted no.”

Based on their campaign statements so far, many of the 2020 Democratic presidential candidates are taking the opposite tack from McGrath, virtually conceding that they'll have to deal with McConnell and a GOP Senate from the White House. Neither of these defeatist strategies bespeaks much confidence.

During the first set of Democratic presidential debates the leading candidates, many of whom have served in the Senate with McConnell, said they would seek long-term structural changes to deal with the majority leader’s relentless obstruction. McConnell infamously blocked Barack Obama's final Supreme Court nominations and more recently has stalled major bills from the Democratic-led House, including measures to protect our elections from foreign interference.

“When we beat President Trump and Mitch McConnell walks into the Oval Office, God forbid, to do negotiations, who do you want when that door closes to be sitting behind that desk, to fight for women’s rights?” asked New York Sen. Kirsten Gillibrand.

Sen. Cory Booker of New Jersey and former Vice President Joe Biden tried to one-up each other on their records of effectively passing compromise legislation with bipartisan support. Biden said he was able to gain McConnell’s support on the $800 billion Recovery Act and even convinced the ruthless Kentuckian to raise taxes by $600 billion. But as Sen. Michael Bennet of Colorado then noted, that deal to make the Bush tax cuts permanent was a major concession to McConnell.

“Gridlock will not magically disappear as long as Mitch McConnell is there,” Bennet asserted.

Rep. Tim Ryan of Ohio insisted that the Democratic Party would have to motivate the working class to boot out McConnell.

“If you want to go into Kentucky and take his rear end out, and if you want to take [Republican Sen.] Lindsey Graham out, you’ve got to have a blue-collar party that can go into the textile communities in South Carolina,” he said.

In reality, the Democratic agenda hinges on retaking the Senate. That appears unlikely, but certainly not impossible. The GOP has a 53-seat majority at present, so Democrats need a net gain of four — and three Republican-held seats already seem truly competitive, according to the Cook Political Report. Democrats like their chances against Sen. Cory Gardner in Colorado, appointed Sen. Martha McSally in Arizona and (especially) the increasingly controversial Sen. Susan Collins in Maine.

In addition, recent announcements by fringe GOP candidates in Kansas and Alabama may put those seemingly safe red-state seats in play. Sen. Doug Jones of Alabama has looked like a long shot ever since he won that 2017 special election, but it's entirely possible Republican voters will again nominate Roy Moore, the former far-right judge and accused sexual assaulter who lost to Jones the last time.

Trump's trade war with China could make both Sen. Joni Ernst of Iowa and Sen. Thom Tillis of North Carolina vulnerable in their first re-election races. Former North Carolina state Sen. Cal Cunningham — like McGrath, an Iraq war veteran challenging a Republican senator in the South — recently announced he had raised more than $500,000 in the first two weeks of his campaign to unseat Tillis. Cunningham's campaign said that 72 percent of his donations were from North Carolina voters, and that no corporate PAC funds were accepted.

Democrats almost certainly won't win all those races. But despite the uphill challenge, there is a scenario for victory. If they can motivate a second blue wave and win the national 2020 vote by 8 million to 9 million votes — the same margin by which they regained control of the House in 2018, in a midterm election that saw the turnout rate among younger voters increase by a startling 79 percent, relative to 2014 — they could plausibly pick up four seats (while perhaps losing one) and end up with a 50-50 split in the Senate. If they have a Democratic vice president in office to break ties, they would hold a majority, by the narrowest margin possible.

“Sure, I want to see us get a Democratic majority in the Senate,” Massachusetts Sen. Elizabeth Warren said at the Miami debate. “But short of [that], you better understand the fight still goes on. It starts in the White House, and it means that everybody we energize in 2020 stays on the front lines come January 2021. We have to push from the outside, have leadership from the inside, and make this Congress reflect the will of the people.”

Those are fine words, but she and all the other 2020 Democrats understand that if Mitch McConnell remains in charge of the Senate there will be precious few substantive legislative accomplishments under a President Warren, a President Sanders or a President Fill-in-the-Blank. A Democratic Senate majority isn’t all that likely. But it's necessary.