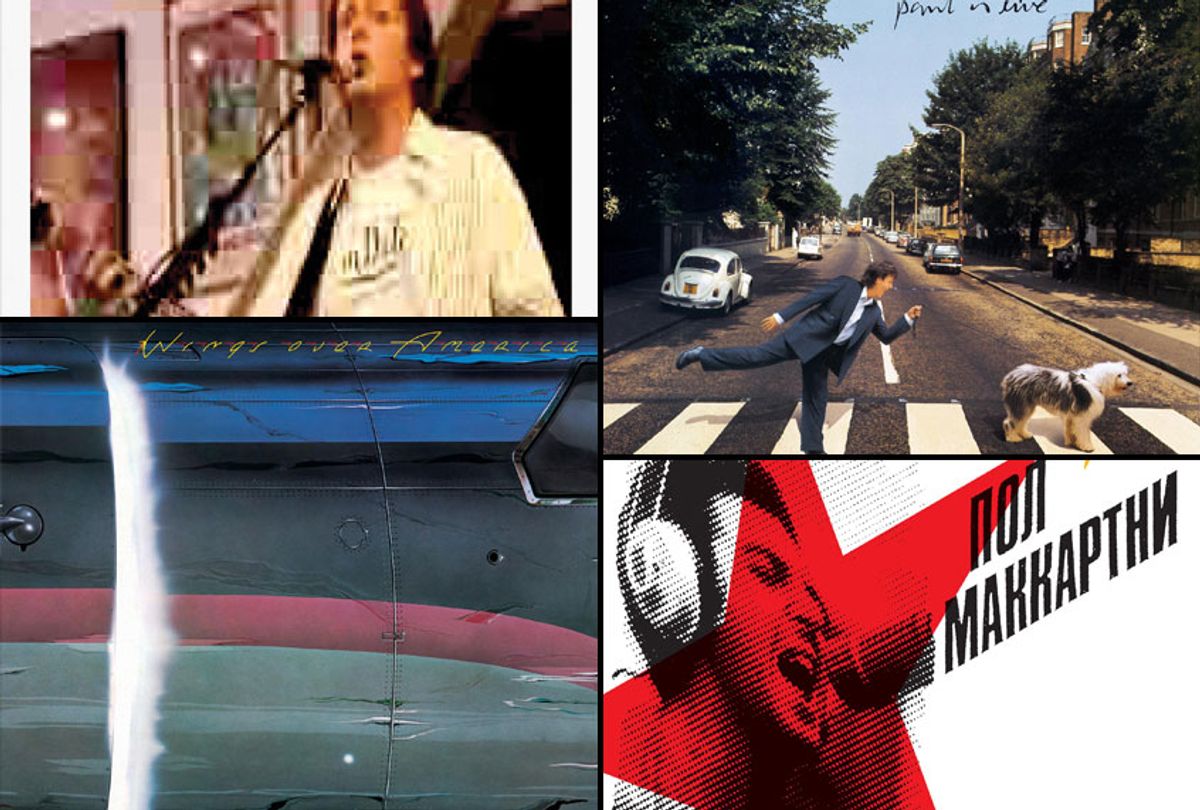 When it comes to sketching out his concert setlists, Paul McCartney must suffer from a veritable embarrassment of riches. In the United States alone, he has authored or co-authored 32 number-one songs—enough to comprise a single live performance all by themselves. And this doesn’t even begin to account for perennial Beatles- and Wings-era favorites like the "Abbey Road" medley or “Live and Let Die,” which are showstoppers in and of themselves.

With his latest spate of reissues, McCartney affords listeners with a sampling of his post-Beatles live performances across four decades, including "Wings Over America" (1976), "Choba b CCCP" (1988), "Paul Is Live" (1993), and "Amoeba Gig" (2008). In so doing, he demonstrates his singular place in the pantheon of live rock performance.

In many ways, "Wings Over America" will always be the cream of the crop when it comes to McCartney’s live recordings. Marking the former Beatle’s bravura return to the American stage, the triple LP memorialized Wings’ 31 North American concerts in 1976. The band featured Wings’ classic mid-period lineup with McCartney on lead vocals and bass, along with wife Linda on keyboards and backing vocals, ex-Moody Blues player Denny Laine on rhythm guitar, wunderkind Jimmy McCulloch on lead guitar, and Joe English on drums. The group is ably supported by trombonist Tony Dorsey, trumpeter Steve Howard, and Howie Casey and Thaddeus Richard on saxophones. Wings’ electrifying 30-song set is highlighted by McCartney’s first live forays into his Beatles past, including cover versions of “Lady Madonna,” “I’ve Just Seen a Face,” “The Long and Winding Road,” “Blackbird,” and “Yesterday.”

But the real highlight of "Wings Over America" is McCartney’s vocal prowess. From his Beatles heyday through the early 1980s, the Cute Beatle was easily rock’s finest and most versatile singer. As the tracks on "Wings Over America" demonstrate, McCartney could do anything with his voice, from the pure sweetness of “My Love” and the tortured beauty of “Maybe I’m Amazed” through the high octane “Jet” and the guttural “Soily.”

For "Choba b CCCP" (“Back in the USSR” in Russian), McCartney shifted lineups yet again, hustling in guitarist Mick Green, bass player Nick Garvey, keyboard player Mick Gallagher, and drummers Chris Whitten and Henry Spinetti to support him in the studio. Recorded “live” over two days in July 1987, "Choba b CCCP" turns in a sizzling array of rock ‘n’ roll oldies, with standout tracks like Eddie Cochran’s “Twenty Flight Rock,” Little Richard’s “Lucille,” and Fats Domino’s “Ain’t That a Shame.” As McCartney’s counterpart to John Lennon’s "Rock ‘n’ Roll" LP (1975), "Choba b CCCP" was originally released exclusively in the former Soviet Union and included such gems as McCartney’s jaunty take on Duke Ellington’s “Don’t Get Around Much Anymore” and a nostalgic arrangement of “Midnight Special.”

By the 1990s, McCartney had conquered the world yet again—and with an entirely new band, no less. Working in support of his "Flowers in the Dirt" (1989) and "Off the Ground" (1991) albums, McCartney and company performed 180 shows across the globe, concluding with the release of the "Paul Is Live" compilation. With a tongue-in-check reference to the “Paul Is Dead” phenomenon in the late 1960s, "Paul Is Live" proved that McCartney was anything but deceased. His band was comprised of Linda, who, unbeknownst at the time, was bidding her untimely farewell to the stage, along with Paul “Wix” Wickens on keyboards, Hamish Stuart and Robbie McIntosh on guitars, and Blair Cunningham on drums. During their four years as a working rock ‘n’ roll band, they ushered in a new era of McCartney concert standards, including superlative renditions of such Beatles classics as “Eleanor Rigby,” “Penny Lane,” “Sgt. Pepper’s Lonely Hearts Club Band,” and “Hey Jude,” among a raft of others.

McCartney rounds out his live reissues with "Amoeba Gig," the “secret” concert that he performed at Hollywood’s Amoeba Music in June 2007. For the show, McCartney’s band included Brian Ray and Rusty Anderson on guitars, David Arch standing in for Wickens on keyboards, and the inimitable Abe Laboriel, Jr., on drums. The Amoeba gig showcases arguably McCartney’s most virtuosic post-Beatles backing group.

Indeed, the quartet of Wickens, Ray, Anderson, and Laboriel has been with McCartney for nearly 20 years—far longer than his Beatles and Wings bandmates, respectively. For the Amoeba concert, McCartney’s group shifts easily among Beatles fare like “Drive My Car” and “I Saw Her Standing There” through latter tunes such as “Calico Skies,” with its heartfelt lyrics about Linda, and “Here Today,” his touching memorial for Lennon.

While some listeners might quibble with the omission of concert recordings such as "Tripping the Live Fantastic" (1990) and "Back in the US" (2002), McCartney’s latest reissues offer a fascinating look at his evolving cast of bandmates in the decades after the Beatles’ demise. Even more important, they remind us of his abiding place as rock’s elder statesman.