Nearly 500,000 people have signed up on Facebook for a proposed raid on Area 51, vowing to "see them aliens" 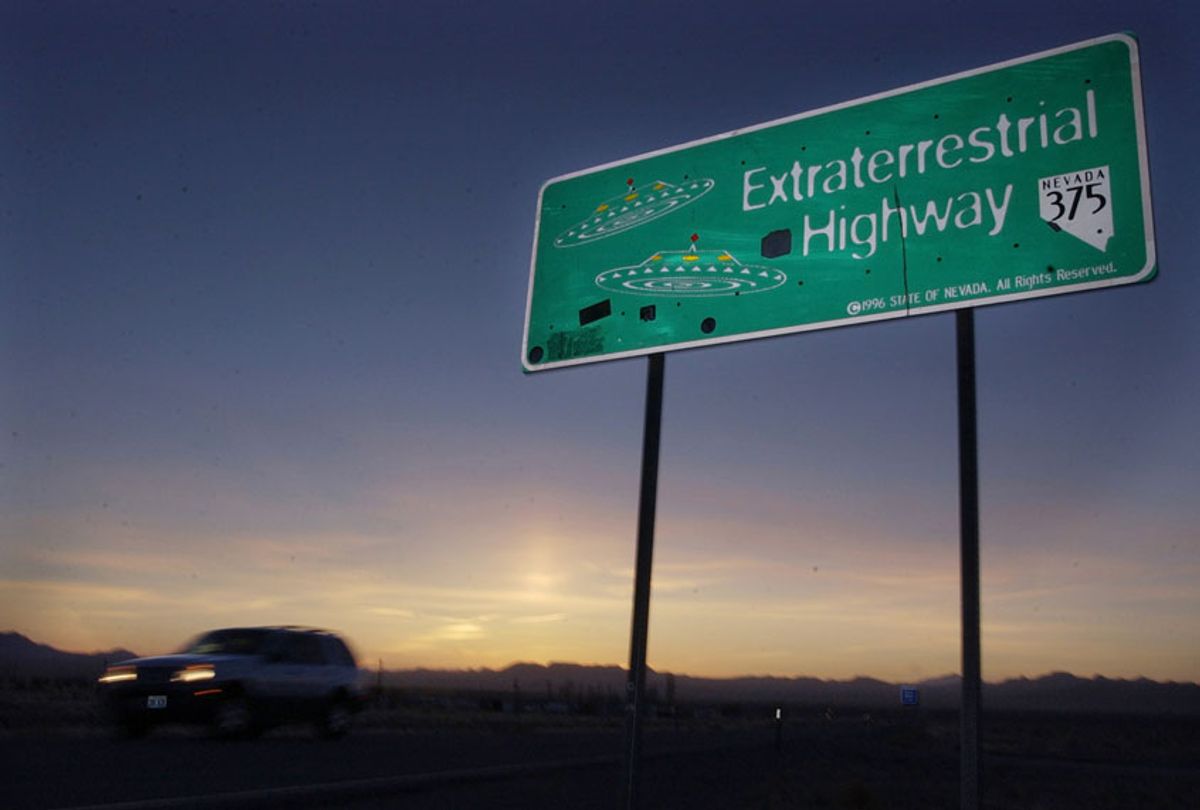 The ET highway was established by the Nevada Legislature in 1996 and runs along the eastern border of Area 51. (AP/Laura Rauch)
--

Extraterrestrial believers have had enough with restricted access to the so-called Area 51, the infamous government facility in the southern Nevada desert. On Facebook, nearly half a million people signed up to raid Area 51 to "see them aliens” by Friday afternoon.

The description of the Facebook titled "Storm Area 51, They Can't Stop All of Us," event reads:

“We will all meet up at the Area 51 Alien Center tourist attraction and coordinate our entry. If we naruto run, we can move faster than their bullets. Lets see them aliens.”

A "Naruto” run describes a style of running depicted in Japanese graphic novels, where one's arms are stretched backward and hed tilted forward. This event will supposedly take place on Sept. 20 at 3 a.m.

The high-security military or government facility often called Area 51 has been the focus of conspiracy theories for decades. Many people believe it is where the government keeps its secrets about aliens, possibly including the bodies of extraterrestrials or a crashed spacecraft from the "Roswell incident" in 1947. In 2013, the government recognized Area 51 as a military site. Many non-UFO observers believe it's where stealth technology and other Cold War secrets were developed, for example.

Some commenters have said the proposed raid is just a joke, but others seem to be more serious about it asking where attendees should book flights for the event. (Las Vegas would be the nearest city with a major commercial airport.)

The possibility of alien visitors to Earth has been in the news as of late. As reported by CNN in June, a group of senators received a classified briefing about reported encounters between the U.S. Navy and unidentified aircraft.

If military pilots "are reporting flight hazards that interfere with training or put them at risk," Rachel Cohen, the spokeswoman for Sen. Mark Warner, D-Va., told CNN, "then Senator Warner wants answers. It doesn't matter if it's weather balloons, little green men, or something else entirely — we can't ask our pilots to put their lives at risk unnecessarily."

Joseph Gradisher, spokesman for the deputy chief of naval operations for information warfare, confirmed the briefing "with interested congressional members and staffers," which discussed the Navy's "efforts to understand and identify these threats to the safety and security of our aviators."

Will the public storm Area 51 and put an end to all the speculation about whether our planet has been visited by aliens? Probably not — but we'll have to wait two more months to find out.