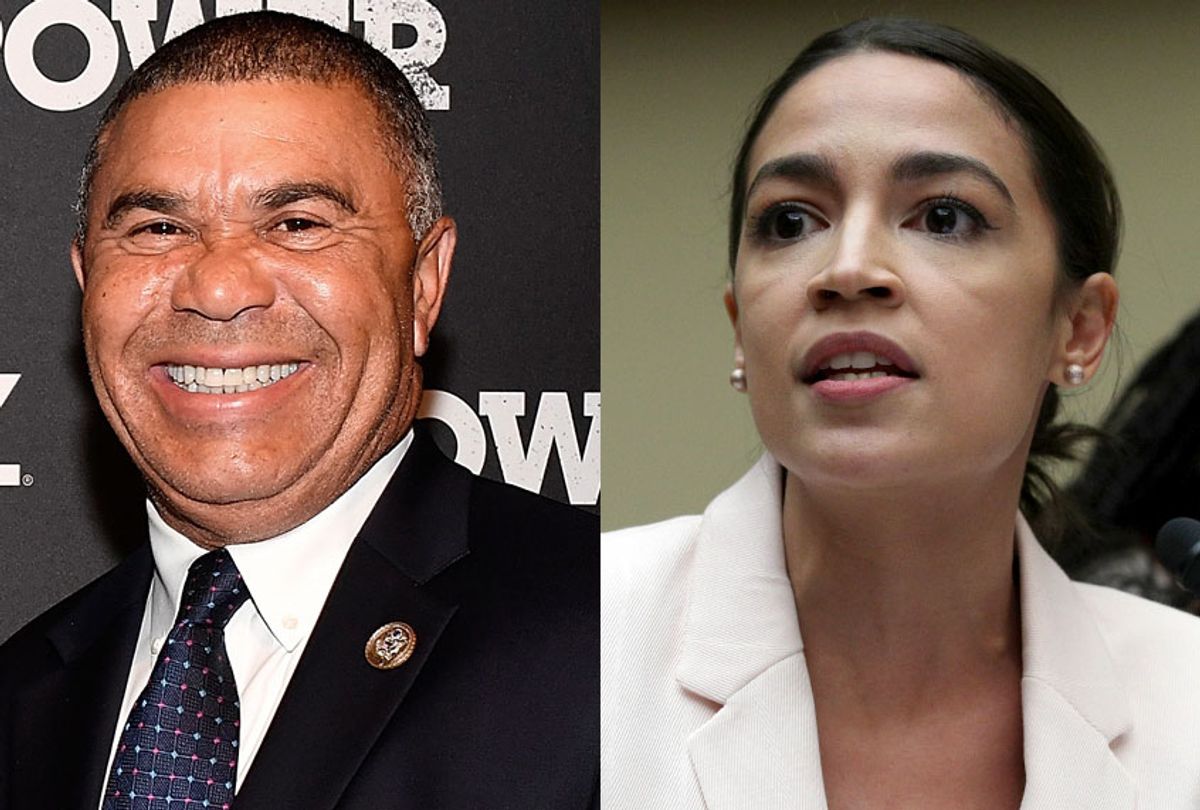 Clay, a long-term member of the Congressional Black Caucus, argued Thursday that Ocasio-Cortez and her allies were speaking out, because "they didn't get their way" after a days-long clash between the old guard of the Democratic leadership and "the squad" emerged into public view.

"How dare they try to play the race card at this point?" Clay asked. "It shows the weakness of their argument. It's damaging to the party and the internal workings of the Democratic Party."

Tensions between Pelosi and the four first-term lawmakers of color — Ocasio-Cortez and Reps. Ayanna Pressley of Massachusetts, Ilhan Omar of Minnesota and Rashida Tlaib of Michigan — appeared to reach a boiling point in recent days after the speaker criticized the the congresswomen for their decision vote against a bill to send $4.5 billion in emergency aid to the nation's southern border.

In an interview with the New York Times, published Saturday, Pelosi appeared to question how much political influence "the squad" actually has, as the four lawmakers were the only House Democrats to buck the party's leadership and vote against the measure.

Ocasio-Cortez fired back at Pelosi, first in a series of tweets and then in an interview with the Washington Post, in which she called attention to the "singling out" of the young, progressive congresswomen of color.

"That public 'whatever' is called public sentiment," Ocasio-Cortez tweeted Saturday. "And wielding the power to shift it is how we actually achieve meaningful change in this country."

The outspoken lawmaker then told the Post on Wednesday: "When these comments first started, I kind of thought that she was keeping the progressive flank at more of an arm’s distance in order to protect more moderate members, which I understood."

"But the persistent singling out . . . it got to a point where it was just outright disrespectful . . . the explicit singling out of newly-elected women of color," she added.

Ocasio-Cortez's remarks to the newspaper came hours after Pelosi reportedly gave a forceful speech at a closed-door meeting, in which she admonished party members for publicly attacking one another over policy disputes on social media. Her remarks came after Ocasio-Cortez's chief of staff criticized Pelosi and compared moderate Democrats to segregationist senators.

"So, again, you got a complaint? You come and talk to me about it," Pelosi said Wednesday, according to Politico. "But do not tweet about our members and expect us to think that that is just OK."

Ocasio-Cortez later clarified that she "absolutely" did not believe Pelosi was being racist, and the speaker said Thursday: "We respect the value of every member of our caucus . . . Diversity is our strength, unity is our power."

Although Pelosi appeared intent on refocusing the party's attention, some lawmakers could not put the feud to bed.

The Missouri Democrat, who faces a primary challenge from the left backed by Justice Democrats, which helped launch Ocasio-Cortez's campaign, dismissed that group as "juvenile" and "ignorant."

Some of his colleagues also publicly came to the speaker's defense. Rep. Karen Bass, D-Calif., the chair of the Congressional Black Caucus, told CNN that she does not believe Ocasio-Cortez's criticism of the speaker is "correct." Bass reportedly said she plans to talk with the freshmen congresswoman about her remarks.

But for Democrats like Rep. Pramila Jayapal, D-Wash, a co-chair of the Congressional Progressive Caucus, Ocasio-Cortez’s accusation that Pelosi works to "diminish progressive power" in the caucus struck a chord for her.

"God, it totally resonates with me, absolutely," she told Politico. "We women of color have faced this for such a long time."Jayapal added, "I don't think the speaker is used to having a group of members who has bigger Twitter followings than her. I don't think most of us are."