Jeffrey Epstein is Donald Trump's idea of the perfect man

The grab ’em twins, Trump and Epstein are deviant criminals separated at birth 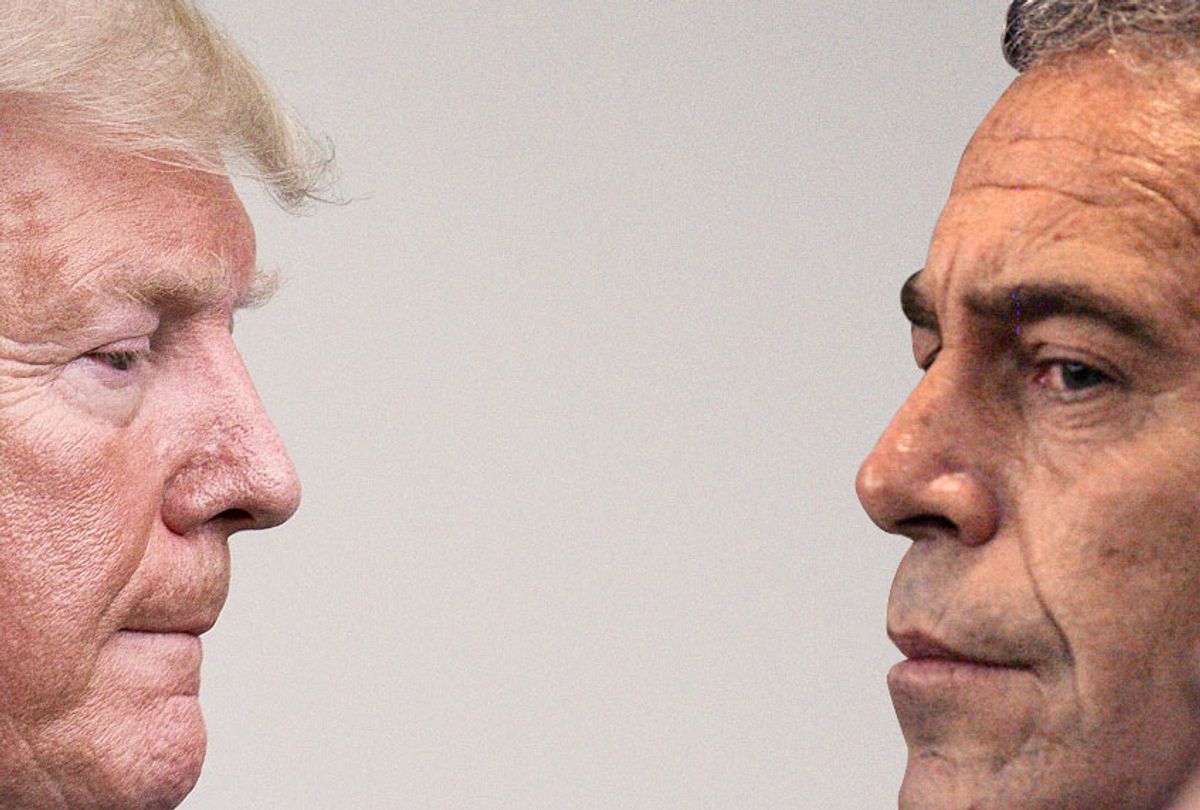 He owned a palatial home in Palm Beach and a luxurious residence in Manhattan.

He owned a commercial airliner converted into a luxurious private plane.

He gave parties attended by young women seeking careers in the modeling business.

He was connected to numerous wealthy, powerful men who shared his taste in women and money.

He bragged to others about his sexual conquests with women.

He paid women for sex.

He was charged in lawsuits with numerous sexual assaults on women.

I really wonder what everyone is doing getting their dander up about this disgusting sex criminal Jeffrey Epstein, when we’ve got one in the White House. We’ve known about Trump not for years, but for decades. We’ve known about his sexcapades around New York with women who were not his wife. Hell, he used to call the New York Post’s “Page Six” and brag about himself!

And by what magic of moral vacuity has the infamous Access Hollywood tape disappeared down the memory hole? Its words ought to be carved in granite and mounted on a pedestal on the Mall in Washington in full view of the current occupant of the White House. Just listen to this low-life disgusting piece of shit. He was bragging to Access Hollywood’s Billy Bush about a ham-handed pass he had made at his co-host on the program, Nancy O’Dell:

“I did try and fuck her.” What the hell is wrong with this man that he would talk like that to anyone, much less to a television host just before an interview?  They were on a bus, getting ready for the interview, and there were seven other people present: a two person camera crew, a production assistant, the show’s producer, Trump’s security guard and his publicist, and the bus driver. Who talks that way about anyone, much less a woman who was the interviewer’s co-host on his television program? Who even talks in that manner about himself?

Trump. He did. And he wasn’t finished. He was on the bus, getting ready to meet a television actress, Arianne Zucker, with whom he would be filming a segment for Access Hollywood. This is what Trump said, referring to Ms. Zucker:

There it is, the infamous “grab ‘em by the pussy” comment that would give newspaper editors fits. Are we really going to print “pussy” in our newspaper?

Looking back, you can hardly believe there was the kerfluffle about printing “pussy,” that the whole thing happened. But it did. It happened on October 7, 2016, in the closing days of what has turned out to be the most consequential presidential election in the history of this country. That was the day the Access Hollywood tape was released.

What happened next should shame all of us, the print press, the television shows that bleeped out “pussy,” even those that didn’t, but most of all the voters, the citizens of this country who beginning on that day, October 7, started sending this incident down the memory hole.

The Access Hollywood tape was released by the Washington Post around 4 p.m. on that day, a Friday. Thirty minutes later, WikiLeaks started tweeting links to emails stolen by the Russians from the personal email account of John Podesta, Clinton’s campaign chairman. Some of the emails on Podesta’s account were embarrassing. They had the transcripts of speeches Clinton had given to Wall Street banks, for which she was paid hundreds of thousands of dollars. They had private comments made by Clinton campaign staffers about ethnic voters.

And all of this was happening exactly one hour after the Director of National Intelligence, James Clapper, and the Secretary of Homeland Security, Jeh Johnson, jointly released a statement blaming Russia for the hacks into the Democratic Party’s emails.

You know what happened next. Trump’s confessions of his own sexual assaults and his disgusting behavior with a woman who was not his wife got lost in the frenzy around the WikiLeaks release of Podesta emails. Trump’s campaign should have been stopped in its tracks. He had already been accused of sexual assault and harassment by two dozen women (Their names, and descriptions of Trump’s sexual misconduct are here). Instead, Trump used the Democratic Party emails stolen by the Russians to stomp all over Hillary Clinton in the closing weeks of the campaign. With the help of the Russians and the cynicism and indifference of the American voter, he squeezed out a narrow victory, and we’ve been paying for it ever since.

But here’s the thing that’s jaw-dropping about Donald Trump. We’ve known who this bastard is for decades. We’ve known that he had affairs with porn stars and nude models and paid them money to buy their silence. We’ve known that he grabbed the private parts of a woman sitting next to him on an airplane, that he grabbed another woman sitting next to him in a restaurant. Hell, he as much as admitted it on the Access Hollywood tape! We’ve known that Trump was accused of raping a 13 year old girl in 1994 – in Jeffrey Epstein’s apartment! A lawsuit was filed on behalf of the victim, “Joan Doe,” making the allegation in 2016 and subsequently dropped.

Only three weeks ago, yet another woman came forward and accused Trump of rape: Columnist E. Jean Carroll accused Trump of raping her in a dressing room in Bergdorf’s in 1995 or 1996, a charge that was subsequently backed up, on the record, by two women who Carroll told about the rape at the time. We’ll hear from more victims of Trump’s sexual perversion before this is over.

So forget about this sexual predator, Jeffrey Epstein. He’s in jail in downtown Manhattan awaiting trial on sex trafficking charges, and already, new witnesses are showing up, accusing him of new crimes.

We’ve got a sexual predator in the White House. The American people put Donald Trump there with their votes. It’s up to us to get him out and put him where he belongs, behind bars alongside his pal Epstein.