Trump's Cabinet exodus is an emergency: Unconfirmed acting secretaries are running the government 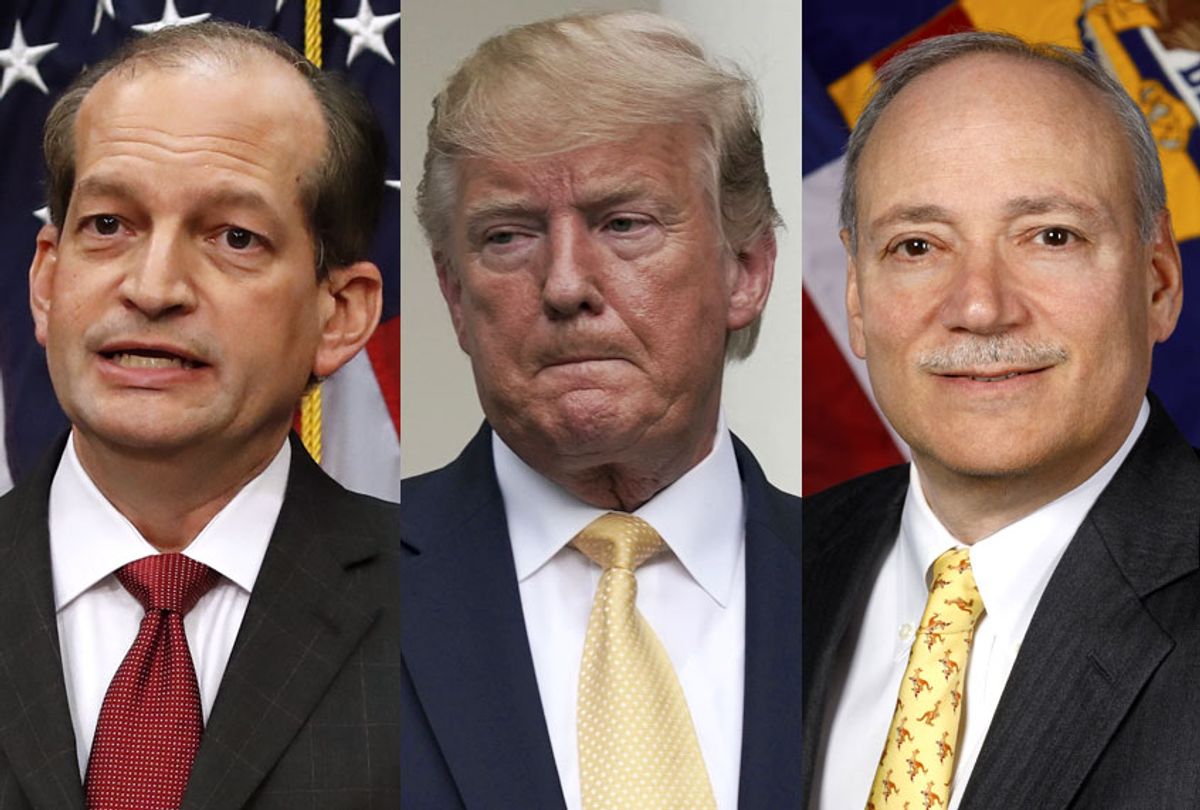 One of Donald Trump’s major campaign promises was to “drain the swamp,” an allusion to the cesspool of corrupt and unethical characters crowding the hallways of power in Washington. But in over two years in office, the only major clearing out in the nation’s capital has been of Trump’s own Cabinet.

On Friday, Department of Labor Secretary Alex Acosta announced that he would join the long list of recent resignations out of the Trump administration, bowing out in disgrace over his handling of a major sex trafficking case involving billionaire political donor Jeffery Epstein.

"He was a great student at Harvard,” Trump said of Acosta on Friday. "He's Hispanic, which I so admire, because maybe it was a little tougher for him . . ."

Acosta was nominated to Trump’s Cabinet, as the first and only Hispanic member, after Trump’s first pick, former Carl Jr.’s head Andy Puzder, was forced to withdraw following allegations of domestic abuse. Acosta’s ignoble departure from the Trump administration comes less than a month after Patrick Shanahan, a former Boeing executive who served as acting defense secretary for six months, withdrew his delayed nomination to the top post at the Pentagon after allegations of domestic abuse within his own family.

Friday’s announcement makes Acosta the 13th Cabinet member to depart the Trump administration. By the same point in their respective presidencies, Barack Obama and George W. Bush had a combined total of four Cabinet-level departures.

Key administration vacancies currently held by acting leaders include the Department of Homeland Security and the Interior Department (both Cabinet-level), along with Immigration and Customs Enforcement, the Federal Aviation Administration, the Food and Drug Administration, the Secret Service and the Federal Emergency Management Agency. There is only an acting ambassador to the United Nations, following Nikki Haley’s departure, and the Office of Management and Budget is run by a temporary director — because Mick Mulvaney left that job vacant to serve as Trump’s acting White House chief of staff, a position which does not require Senate confirmation.

And there seems to be no end to the exodus in sight.

Energy Secretary Rick Perry reportedly has plans to leave. The president has also reportedly told confidants he is eager to remove Dan Coats as his director of national intelligence. NBC News reported on Monday that Trump is now also working to oust Commerce Secretary Wilbur Ross, who failed to get a citizenship question added to the census.

At the Department of Labor specifically, seven permanent or acting department agency heads have departed in the last year. Two nominees withdrew from Senate consideration, and the newly announced acting secretary, Patrick Pizzella, will soon need to search for the department’s third chief of staff just this year.

Pizzella, a former partner of disgraced business lobbyist Jack Abramoff, the subject of one of the largest congressional lobbying scandals in recent history, has served as a Labor Department deputy since 2018. With Abramoff, Pizzella worked on behalf of the Commonwealth of the Northern Mariana Islands, a small chain of islands in the Pacific Ocean just north of Guam, to oppose the extension of federal labor and immigration laws to the U.S. territory. According to a government report, “Foreign workers pay up to $7,000 to employers or middlemen for the right to a job in the CNMI. When they finally reach the Commonwealth, they are assigned to tedious, low-paying work for long hours with little or no time off. At night, they are locked in prison-like barracks.”

When former Sen. Al Franken, D-Minn., asked Pizzella whether he knew about reports of forced abortions and routine beatings during his 2018 confirmation hearings, Pizzella replied, "I was not aware of any such thing.”

The Republican-controlled Senate narrowly confirmed Pizzella in April 2018 on a 50-48 party-line vote.

"[H]e has not done enough to repudiate his past record of defending companies that routinely ignored these [labor and civil] rights, and he has not given workers adequate reason to believe that he will defend their rights in the future,” the Leadership Conference on Civil Rights said at the time.

But even with his known record, Pizzella had long worked for administrations of both parties. He was an assistant secretary at the Labor Department throughout President George W. Bush's entire two-term administration and then was Obama’s pick to serve as the Federal Labor Relations Authority’s sole GOP representative. The three-member agency oversees labor relations between the government and federal employees. Following Trump's election, Pizzella became FLRA chairman.

Trump said Friday that Pizzella "will do the job. Highly recommended by Alex. Going to be acting. He’s already been told." The White House has yet to announce, however, if Pizzella will be tapped as the nominee to become permanent labor secretary.

Of course, Trump is in no rush to transition from an acting, unvetted leader, to a Senate-confirmed Cabinet head. This is the system Trump wants, one where he never has to bother clearing senior appointments with Congress.

“I like acting. It gives me more flexibility. Do you understand that?” Trump explained in January.

It is tempting to regard all of the actings in his Cabinet as a sign of Trump’s ineptitude, but it is Trump appointing whomever he pleases without requiring Senate approval. As part of the corrosive "unitary executive" theory expanding the power and scope of the presidency, which has been thoroughly explained by Salon’s Heather Digby Parton, Republicans have only happily abdicated their constitutional responsibility in favor of fast-tracking judicial nominations. More than 25 percent of the federal appeals bench is now constituted by Trump appointments.