Trump's racist outburst was unbelievably vile — but why is anyone surprised

Were Trump's attacks on "The Squad" a new low? Maybe — but it's not like he's been concealing who he really is 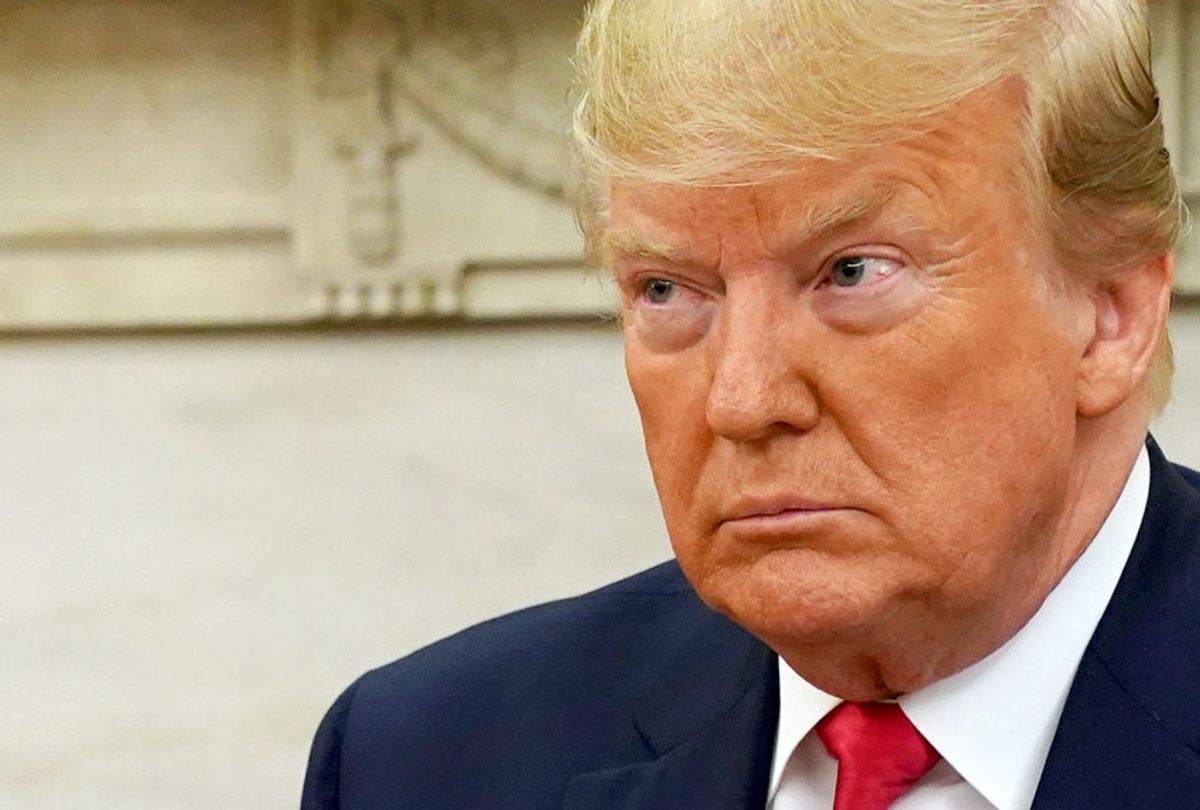 Donald Trump dug deeper than ever into his bucket of political scatology this weekend. On Sunday, in tweets already made infamous, he proclaimed:

So interesting to see “Progressive” Democrat Congresswomen, who originally came from countries whose governments are a complete and total catastrophe, the worst, most corrupt and inept anywhere in the world (if they even have a functioning government at all), now loudly and viciously telling the people of the United States, the greatest and most powerful Nation on earth, how our government is to be run. Why don’t they go back and help fix the totally broken and crime infested places from which they came. Then come back and show us how it is done. These places need your help badly, you can’t leave fast enough. I’m sure that Nancy Pelosi would be very happy to quickly work out free travel arrangements!

This is another version of "America: Love it or leave it!" It's troglodyte patriotism, low and unseemly coming from a drunk on a barstool, and nearly impossible to believe coming from the president of the United States.

Trump's "Progressive' Democrat Congresswomen" are no mystery. He means Ayanna Pressley, Alexandria Ocasio-Cortez, Rashida Tlaib and Ilhan Omar, all freshmen elected last year. Ocasio-Cortez was born in the Bronx. Pressley was born in Cincinnati. Tlaib was born in Detroit.

Ilhan Omar was born in Somalia and came to America as a refugee in 1995. Unlike those Americans who hit the geographic and genetic lottery by being born in the United States, she chose to become an American citizen in the year 2000, at 17 years old. Her patriotism and loyalty to America are proven by her choice to be a public servant and by the policy goals she has pursued.

This kind of "Love it or leave it!" patriotism has always been infused with white supremacy. Such language has have routinely been directed towards nonwhites and others — especially liberals, progressives and socialists — who want to make the United States a better country. Those who throw these rhetorical bombs imagine the nation as one being a "real American" is synonymous with being white and Christian.

Trump's comments are not surprising or shocking. Throughout his public life, Trump has shown himself to be a racist and a bigot.

Journalist Jonathan M. Katz summarized this perfectly on Twitter, writing on Sunday: "Donald Trump was an authoritarian white supremacist with fascist tendencies in 2015, and every single public figure and publication that did not make that clear from the moment he announced is complicit in the #ICEraid, the concentration camps, and everything happening today."

For all of the talk about how the Democrats are obsessed with "identity politics" in reality it is Donald Trump, the Republican Party and their supporters who wield it like a whipsaw against multiracial democracy and black and brown people.

The only riddle — and it is not much of one — is why so many members of the chattering class remain in denial about who and what Donald Trump really is.

The answer lies in white racial innocence: the presumption that to be "white" is to be inherently benign in one's intent and behavior, and in the outcomes which generally result. Donald Trump is the country's most prominent beneficiary of that type of white privilege.

There remains, even now, a fear and reluctance among the mainstream news media to describe Donald Trump as a racist or a white supremacist. Instead his bigotry is treated as a puzzle or the source of indecipherable questions. We can't know what is in his heart. Trump is often said to "misspeak" or to "make inaccurate statements."

In the Boston Review, historian Lawrence B. Glickman summarizes such rhetorical trickery this way:

The media’s use of “racially tinged” telegraphs that racism is normal, non-pathological, and within the range of mainstream political disagreement.

An October 22 headline in the New York Times claimed that “Trump and G.O.P. Candidates Escalate Race and Fear as Election Ploys.” How exactly does one “escalate race”? The article didn’t say, although it did note that “Mr. Trump and other Republicans . . . have attacked minority candidates in nakedly racial terms.” A Washington Post article by Matt Viser on how Republicans were “stoking racial animosity” used the word “racism” twice. But Viser also twice used “racially tinged,” employed the phrase “race-based,” and modified the word “racial” in more ways than I thought possible, speaking of “racial insults,” “racial undercurrents,” “racial animosity,” “racial fringes,” “racial attacks,” “racial connotations,” and “racial fears.”

Glickman continues with an explanation of these "semantic somersaults," writing that such expressions arrived in the 1990s "as matter-of-fact description of forms of racism that had become normalized as essentially non-pathological and within the range of mainstream political disagreement."

Given this historical context, what on the left has been so often treated as Trump’s radical departure from political norms comes into focus as the terminal outcome of mainstreaming the color-blind language of post–civil rights white supremacy. By extension, the cure cannot be more of the same: by amplifying this language of “racially tinged” and its kin, the media replicates the very same language of indirection that was invented by right ideologues to make it difficult to speak accurately of racial oppression. Color-blind and euphemistic coverage not only masks the danger of racism, it reinforces it. If this language was harmful during the era of “Massive Resistance” to the civil rights movement in the late 1950s, it is no less so in the age of Trump, when subtle dog whistles have been replaced with overt appeals.

Donald Trump has called right-wing hate-mongers "very fine people" and somehow his words are reinterpreted by his defenders and enablers to mean something other than exactly what he said.

Despite all of the evidence to the contrary, Donald Trump's victory is still described as a result of "economic anxiety" among the white working class, rather than as a national temper tantrum by white racists.

Trump's racism is also described as "rallying his base." In fact, Donald Trump is telling his racist voters what they want to hear and that he agrees with them.

When there is right-wing domestic terrorism and other violence committed in Donald Trump's name or inspired by his politics, he is never held responsible.

The Klan, neo-Nazis and other white supremacist groups hail Trump as their hero. Yet, it is somehow unfair to hold Trump responsible for the fact that such groups and individuals adore him.

Trump's regime has imprisoned nonwhite migrants and refugees in concentration camps. He has slurred Latinos and Hispanics as a natural "race" of thieves, rapists, and murders who are "polluting" and "infesting" America through an "invasion" as they "breed" in the country's cities. This is greeted by public debates about language and nomenclature — are they concentration camps or something else? — rather than a focus on the crimes against humanity in which Donald Trump's regime and its supporters are engaged.

Trump and the Republicans are doing everything they can under the law, and sometimes in violation of it, to keep nonwhites from voting as part of a broader war on civil rights and human rights

Trump's regime is constantly trying to adjust the country's immigration laws to maintain a white majority.

Trump left the people of Puerto Rico to die by the thousands after Hurricane Maria because in his eyes they are "lazy." Trump has said that African-American athletes and others who support the Black Lives Matter campaign to end police brutality are traitors who should be kicked out of the country. Trump has described predominantly black countries such as Nigeria or Haiti as "shitholes."

Perhaps most dangerous, in this time of crisis there is a still a reluctance by many members of the Fourth Estate to state that Donald Trump is a fascist and an authoritarian — even though he admires such leaders, threatens political violence against his "enemies," and frequently jokes about having journalists killed or imprisoned.

There are still many reporters, columnists and other opinion leaders who use the first-person plural when discussing how "shocked" they are at Trump's behavior as president and how "unexpected" this all seems.

In fact, many Americans were keenly aware of the threat posed to America by Donald Trump and his movement. Black Americans, a community which has a personal and intimate understanding of fascism and authoritarianism — from slavery to Jim Crow to subtler forms of American apartheid — were entirely clear about the misery that Trump and his movement would unleash upon the country.

Prize-winning novelist Paul Beatty told the Guardian in 2017, "This is nothing new. To me that’s the part that feels disingenuous. When people go, I don’t recognize this place. And I’m like, where have you been? That’s the part that bothers me. With the police violence — people are like, oh I didn’t know. And it’s like people have been putting this in your face for ages and all of a sudden now … why now?”

Excluding Trump's supporters — who knew exactly what he would do and were eager for it to happen — most white Americans chose to ignore these warnings. White racial innocence won out. White privilege once again imperiled American democracy and the country's future.

If those white Americans who feel themselves perpetually shocked and surprised by Donald Trump's racism and other foul behavior could answer the following questions, perhaps we could expect a better result in the 2020 presidential election and the years to follow.

When we told you that Trump and his supporters were white supremacists, why didn't you listen to us then? Three years in, have you learned anything about why you were in such denial? What are your biases and blind spots? Will you listen to us next time?

Hope is a good thing. Hope can also be a foolish thing. Holding one's breath while waiting for answers to these questions will likely be dangerous to one's health.