More Thor! Why this Marvel superhero deserves yet another sequel

With Taika Waititi directing, Thor is now the first MCU character to get a fourth standalone movie — and rightly so 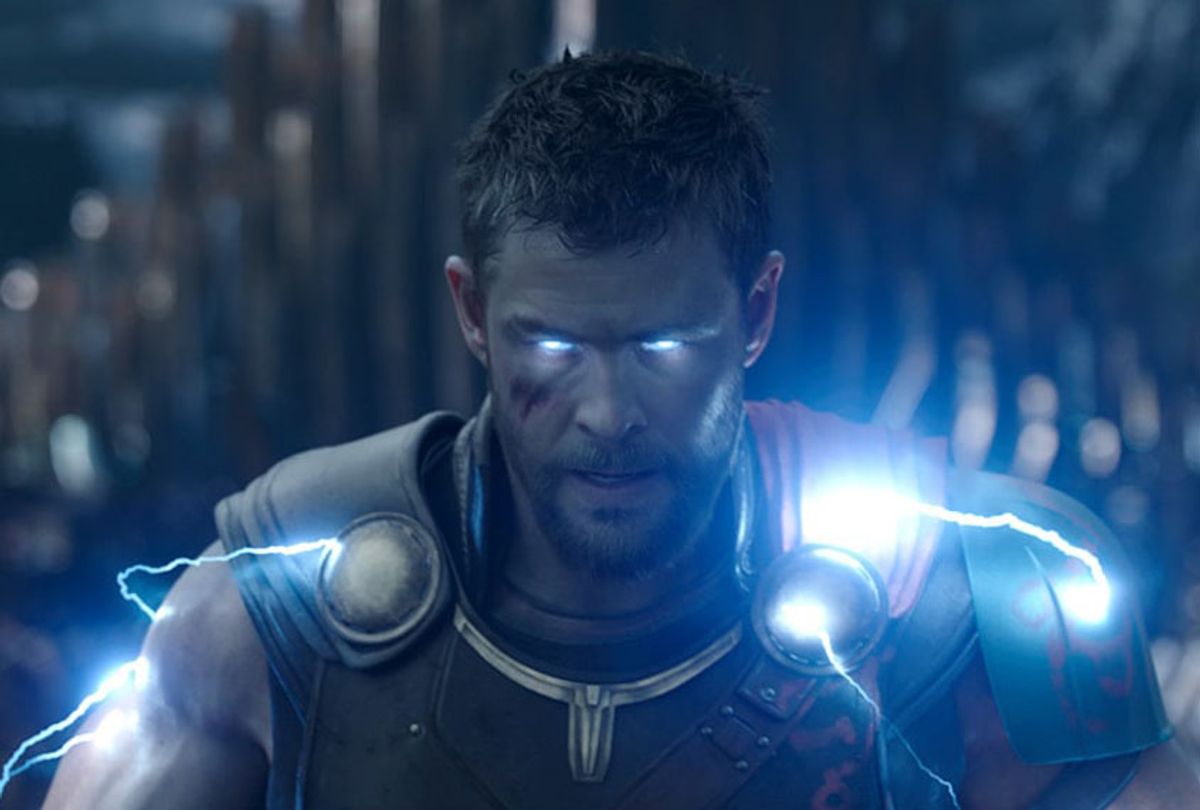 The "Thor" franchise made history on Tuesday when it was announced that a fourth film would be released in the series, making Thor the first Marvel Cinematic Universe superhero to star in more than three standalone films.

It is a well-earned distinction — and one that few would have foreseen when the series first began. Indeed, considering the saga's inauspicious start, the ongoing success of the "Thor" movies is a testament to the power of creative evolution in blockbuster filmmaking.

A quick recap: In the 2011 movie "Thor," audiences were introduced to the supposed god of thunder as the prince of a pocket dimension known as Asgard, which in Marvel lore provided the ancient Scandinavians with inspiration for their mythological gods. When we first meet him, Thor Odinson (Chris Hemsworth) is a skilled fighter but a brash, egotistical and brutish young punk, one in desperate need of humbling before he can be worthy of the throne of Asgard. Fortunately for both him and the audience, that humbling occurs when he is banished to Earth by King Odin (Anthony Hopkins) due to the treachery of his conniving younger brother Loki (Tom Hiddleston). Thor's character arc in this story is pretty standard: He learns to become a more compassionate man, earns the affection of his love interest Jane Foster (Natalie Portman), defeats Loki and wins his father's respect. Considering that it was directed by Shakespearean regular Kenneth Branagh, it is perhaps unsurprising that "Thor" applied a classical approach to its storytelling, but the end result was forgettable — entertaining, to be sure, but hardly an instant classic.

The same could be said for "Thor: The Dark World," which was directed by "Game of Thrones" alumnus Alan Taylor and released in 2013. Picking up the titular character's story arc where it was left after "The Avengers" in 2012 — namely, with Loki imprisoned and Thor back doing his duties in Asgard. The main plot in "The Dark World" is even less memorable than that of the original film, so much so that it doesn't warrant summarizing here. The side stories are far more notable: After abandoning Jane at the end of "Thor" and failing to reconcile with her in "The Avengers," Thor finally pairs up with his love interest at the conclusion of "The Dark World" and in the process demonstrated to audiences just how limp and devoid of chemistry their story arc was the entire time. Far more intriguing was the relationship between Thor and Loki: While their rivalry seemed rote in the first movie, Hiddleston's understated pathos in "The Avengers" was mined for all it was worth in "The Dark World," and rightly so. The best scenes in that movie are seeing Thor and Loki clash with one another, as Hemsworth and Hiddleston know exactly how to highlight the underlying respect and love the two warring brothers feel for each other even as neither one forgets their rivalry and desire to see their counterpart thoroughly defeated.

The problem with "The Dark World," though, is that it is so damn uninteresting. Because Thor is just a generic good guy throughout its running time, there is no particular reason to feel more invested in his fate than one would in those of other, more interesting heroes like Iron Man (who is witty, egotistical and brilliant) and Captain America (who is charming in the Boy Scout-ish way one expects from Superman). Similarly, because the plot contains bland lore, lame humor and little in the way of deep side characters, "The Dark World" feels less like a sweeping classical epic in the tradition of the first "Thor" movie and more like a series of set pieces connected by half-hearted narrative tissue. Considering that the first "Thor" was also underwhelming, the diminishing returns offered by its sequel ominously suggested that there wasn't really much going for this series other than its connection to the more interesting movies in the Marvel Cinematic Universe.

By the close of "The Dark World," Loki has tricked Thor and the rest of Asgard into believing he is dead so that he can impersonate Odin and rule that realm (Odin's fate remained unclear at the time, though it was explained in the third movie). Thor himself, meanwhile, decided to leave Asgard and explore for a while, bringing him to the adventures that he would undertake in the 2015 movie "Avengers: Age of Ultron" and the beginning of the 2017 movie "Thor: Ragnarok."

And it is here — with the release of "Thor: Ragnarok," arguably the best movie in the entire Marvel Cinematic Universe — that the Thor series finally realized its potential to become something truly special.

The premise of "Ragnarok" could have easily been dark, even depressing. Directed by Taika Waititi (who will return to direct "Thor 4"), it involves his desire to stave off Ragnarök, a prophesied event that will lead to the destruction of Asgard, as well as Thor's need to stop his older sister Hela (Cate Blanchett) from conquering the realm and ruling it as a tyrant. Yet despite this grim set up, "Ragnarok" distinguishes itself from the first two "Thor" movies by its overwhelming sense of whimsy. With lush and colorful world-building, "Ragnarok" follows Thor as he is repeatedly humiliated (being shorn of his long blond locks, stripped of an eye, watching Hela destroy his iconic hammer Mjolnir in sublimely Freudian fashion) and is ultimately compelled to accept the inevitability of Ragnarök to prevent something even worse. These events are played not for melodrama, however, but for laughs: Waititi and Hemsworth wisely decide to mine comedy in how the once pompous god reacts to the increasingly bewildering and frustrating turns of fate, and in turn make it feel earned when he rises above his new insecurities in order to do the right thing by himself and his people.

"Ragnarok" also benefits enormously from the strong supporting cast. Hiddleston is once again sublime as Loki, bringing his character arc to a satisfyingly redemptive conclusion that becomes particularly poignant in light of how he is killed off in 2018's "Avengers: Infinity War" (he essentially trades his own life to save Thor). Yet whereas the Thor-Loki relationship was the only one that worked in the first two "Thor" movies, here there are other character dynamics that are equally compelling: Valkyrie (Tessa Thompson) is an alcoholic, jaded former Valkyrior for Asgard whose contempt for the royal family leads to some wonderful verbal and slapstick sparring with Thor; Grandmaster (Jeff Goldblum) is an idiosyncratic hedonist and Elder of the Universe who is weirdly likable despite the fact that he spends most of the movie capturing living creatures and forcing them to fight for his amusement; and Bruce Banner/Hulk (Mark Ruffalo) develops a buddy cop dynamic with Thor as the two characters try to escape from the Grandmaster's clutches in order to save Asgard, with Thor needing to develop a rapport with both the brainy Banner and the luggish Hulk.

Because "Ragnarok" did such a sublime job of taking Thor's character arc in a bold new direction — humbling him not temporarily but permanently, and closing with him as the scrappy leader of a band of refugees rather than the proud monarch of a realm — his storyline in "Infinity War" and its sequel, 2019's "Avengers: Endgame," wound up being one of the highlights of those two movies. After nearly preventing the (ultimately temporary) deaths of half the universe by striking the villainous Thanos (Josh Brolin) with an axe — only to realize that, because he didn't aim for the head, he had failed to actually accomplish anything — Thor spirals into self-pity and depression, developing a drinking problem and packing on weight as he indulges in physical pleasures to escape his horrible emotional pain. By the end of the film he learns to forgive himself for his failures and develops a new sense of self-confidence, hitching a ride with the Guardians of the Galaxy to go off on new adventures. And this, one can reasonably expect, is where fans will find him when the next "Thor" movie begins — assuming, of course, that his character arc isn't first continued in the third "Guardians of the Galaxy" film.

Either way, it is fitting for Thor to break precedent and get a fourth standalone movie because the filmmakers behind the character were so clever in figuring out what to do with him. It shows that filmmakers who take risks and try something different — who don't feel slavishly beholden to the tones and themes used by previous filmmakers in their franchises and are instead willing to experiment — can be rewarded as much as the audiences they entertain in the process. If Waititi hadn't been so skilled as a director, and Hemsworth as a performer, the "Thor" series could have fizzled out to a rote conclusion in an overwrought third film, the character's arc could have been brought to a close in some trite way in the following "Avengers" movies and audiences could have moved on accordingly.

Instead the last "Thor" movie, and subsequent pair of "Avengers" films, have left audiences rightly feeling that there is more story left to be told for this character. And that is why — even as the tales of Iron Man and Captain America, the other two core Avengers, have been wrapped up — it is appropriate that we're going to get at least one more chapter in the tale of the Norse god of thunder.