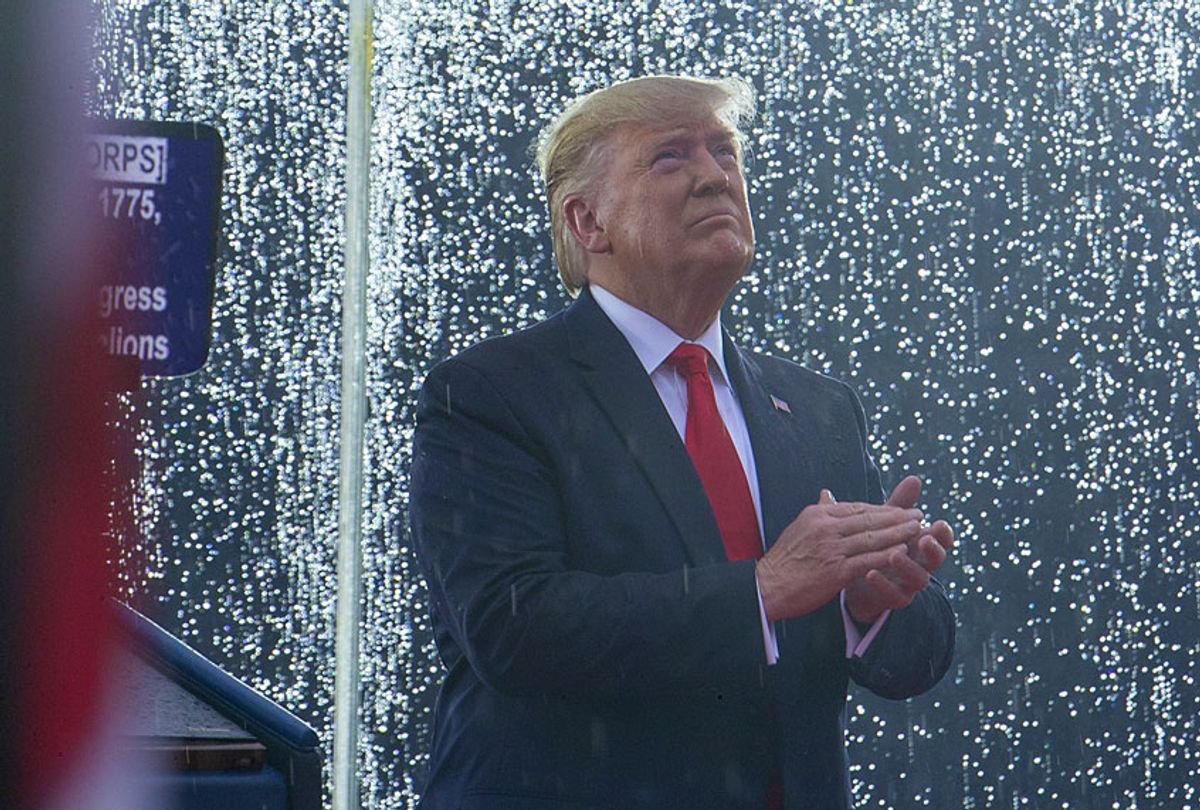 This year’s celebration of American independence was ostensibly all about the U.S. military. In reality, it was all about Donald Trump’s ego. Ever since he laid eyes on France’s July 14th parade in 2016 at the invitation of Emmanuel Macron, Trump had to have one himself.

Thus, with a special thanks to the French President’s bygone efforts to fence in the American president with French charm and attention, Trump finally got his military parade, complete with military vehicles and tanks in the streets of Washington, and a flyover by fighter jets.

In sharp contrast to all the years past, nothing was mentioned about the great ideals — life, liberty and the pursuit of happiness — on which the United States was built. Under all of Trump’s predecessors, they had been the theme of Fourth of July celebrations.

Instead, there was lots of bragging about America’s unprecedented military strength, mostly achieved, as Trump unsurprisingly sees it, on his watch. Perhaps as justification of the costs involved, Trump afterwards told reporters that many people will be volunteering for the U.S. military following such splendid patriotic pageantry.

Giving the man his due

While Trump is often decried in the United States as an aberration, the truth is that many of the things Trump says and does are a culmination of long-time trends in U.S. politics and society.

Reverence for the military is one such trend, from which a military parade down Independence Avenue was a natural outgrowth.

Expressions of gratitude to active duty personnel and veterans have long been one of those pieties which everyone readily mouths.

Playing the national anthem before every professional sports event — when a bunch of overpaid guys engage in kids’ games — is invariably accompanied by the presentation of colors by a uniformed detachment and expressions of thanks “to men and women in uniform.”

Colin Kaepernick, a top African-American quarterback who dared to take a knee during the singing of the national anthem to protest police brutality, has been accused by Trump of disrespecting the U.S. military and run out of professional football.

Corporations have cottoned on to this massive hypocrisy. Active duty personnel, for example, get priority boarding on Delta Airlines flights.

Veterans and service personnel deserve respect, but Americans respect the military as an institution, not as individuals making sacrifices.

There are plenty of stories about veterans being unceremoniously deported by ICE. The Veterans Administration is perennially mired in scandal and is underfunded, and sick or indigent veterans are routinely ignored.

On the other hand, 74% of Americans trust the military— i.e., the Pentagon. This is the most by a considerable margin, while television news get a 20% trust rating and Congress 11%.

Trump’s military parade was also about the Pentagon, not the enlisted personnel who had to spend their 4th of July under the torrential rain and sweltering heat of Washington.

A reality check on performance

At the same time, one must really wonder about what is supposedly so superb about the Pentagon’s record over the past 65 years.

After fighting North Korea and China to a draw (that conflict is still simmering sixty years on), the U.S. military lost the war in Vietnam, abandoning its South Vietnamese allies and the people of Laos and Cambodia to their tragic fate.

It then gloriously defeated Saddam in Kuwait, but it was only Stage One of the prolonged war in Iraq, which can’t be considered as an American victory. And it is in the process of losing the war in Afghanistan, where the United States has been engaged in the longest and most futile war in its history. The Pentagon is now negotiating an “honorable” exit with the Taliban, which looks suspiciously like the Paris Accords of 1973.

Back then, the sides that were subsequently awarded the Nobel Peace Prize, merely agreed to a decent face-saving interval for Washington before the North Vietnamese overran Saigon.

Truth be told, staging military parades is always a sign of military weakness. Many second-rate countries have parades and, for me at least, Trump’s parade harks back to the old unlamented Soviet Union.

Trump’s parade is a classic display of military impotence. The ridiculous Twitter duel with North Korea’s Kim Jong Un, in which Trump boasted that his nuclear button is bigger than Kim’s ended with an exchange of love letters and a meeting on the North Korean territory.

Needless to say, no nuclear disarmament by Pyongyang is forthcoming.

Trump’s saber-rattling against Iran has been equally useless. After threatening the mullahs with annihilation, Trump then promptly called off the supposed bombing raid on Iranian targets. The paper tiger quality of American military threats has been laughable.

What is not a laughing matter is the complete impunity with which Vladimir Putin is rejiggering the post-Soviet map. True, no one is going to start a nuclear war for the sake of Georgia or Ukraine, or when Moscow annexes Crimea.

But Trump’s ignominious deterrence to Vlad, the Aggressor in the Kremlin, makes a sad mockery of the display of American military hardware on Independence Day.