CNN didn't tell us its supposed panel of "Republican women" were, literally, the "Trumpettes"

A random group of "Republican women" defending Trump's racist tweets? Nope, they were the "Trumpettes of America" 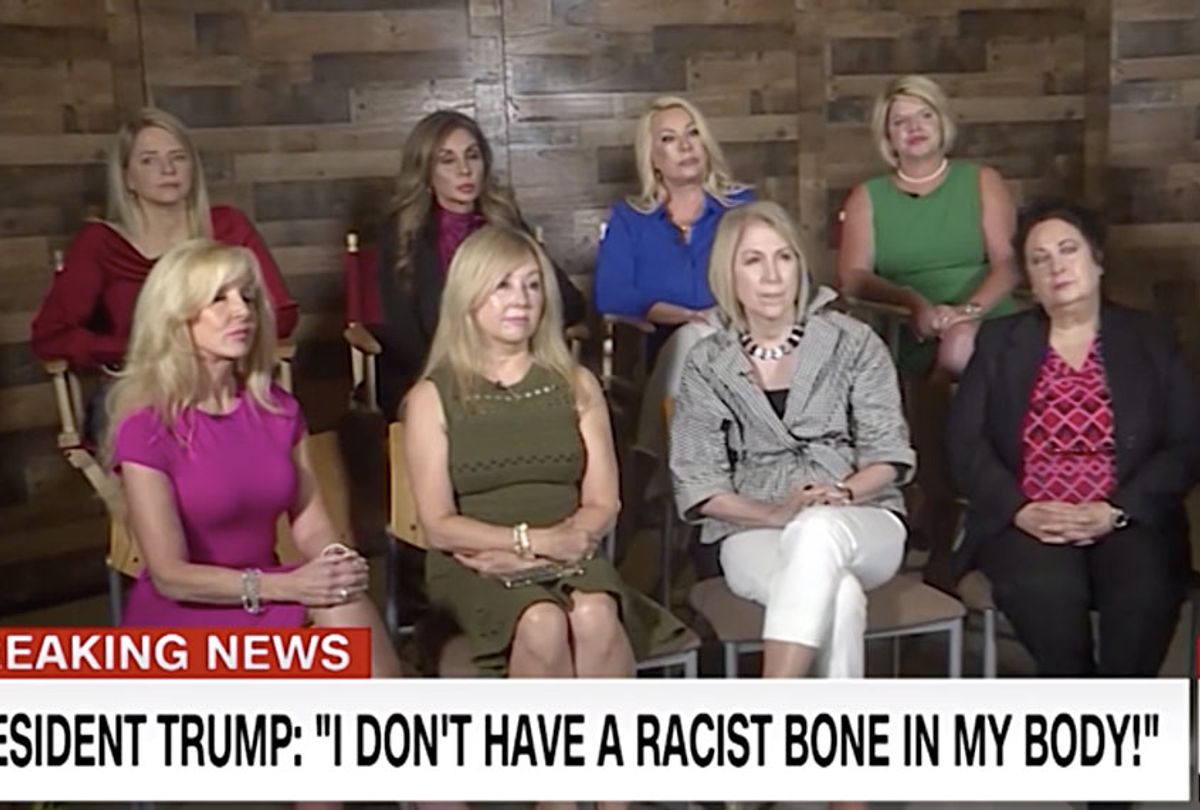 CNN aired a panel that featured “Republican women” defending President Trump’s racist tweets, but failed to mention that they were actually part of a pro-Trump group whose members the network had interviewed in the past.

On Tuesday, the network aired a segment that included a panel of “Republican women,” seemingly or presumably selected at random, who defended Trump’s “go back” tweets aimed at four Democratic congresswomen of color.

“These eight Republican women from Dallas don't see anything wrong with President Trump telling four Democratic congressman to go back where they came from,” CNN’s Randi Kaye said, introducing the women.

“I'm glad that the president said what he said because all they are doing is they are inciting hatred and division,” one of the women, Gian O’Briant, told Kaye, adding that “he didn't say anything about color.”

Another woman, Peaches McGuire Coates, was upset that Kaye mentioned that the four representatives Trump attacked were women of color.

“Why do you keep bringing that up?” she asked. “It's idiotic, what they're saying. So, it doesn't matter whether they're white, man, woman, brown, yellow, anything.”

CNN failed to mention that both O’Briant and Coates had been featured in CNN segments defending Trump before. Though they were previously billed as “Trump supporters,” CNN simply referred to them as “Republican women” in this week’s segment.

The network also failed to mention that the women were part of a pro-Trump group called the Trumpettes of America 2019 Palm Beach Team, the Washington Post reported.

Coates and O’Briant were previously listed as members of a group called Texas Women for Trump Coalition when they appeared on the network in September of last year to praise Texas Sen. Ted Cruz. But Coates, O’Briant and fellow panelist Dena Miller were also interviewed in January of last year ahead of Trump’s State of the Union speech, with no affiliations being listed. The women defended Trump amid what were then allegations that he paid Stormy Daniels hush money to keep quiet about their alleged affair.

Both instances are a clear violation of journalistic ethics. The Society of Professional Journalists’ Code of Ethics instructs journalists to give viewers proper context and “identify sources clearly. The public is entitled to as much information as possible to judge the reliability and motivations of sources.”

Edward Wasserman, the dean of the University of California at Berkeley journalism school, called the lack of disclosure “a fraud on the viewer.”

Fred Brown, a member of the SPJ ethics committee, told the Post that he doesn’t believe the lack of disclosure was intentional but accused the network of “incomplete reporting.”

“I don’t see any good reason for CNN not to identify the affiliation of these women,” he also said. “It’s a useful bit of information to help viewers evaluate the women’s motivation and mind-set.”

Not only did CNN fail to disclose the women’s affiliations in the segment that ran on the network, there is similarly no mention of their group in the archived video on CNN’s website, titled “These GOP women see nothing wrong with Trump's comments,” or even in CNN's published article (which features six bylines) about the segment, titled “These Republican women say they stand behind Trump and don't see his recent tweets as racist.”

Media Matters reported that during one replay of the segment on Wednesday, daytime anchor Ana Cabrera finally mentioned that “several” of the women on the panel “are affiliated with groups that support President Trump.”