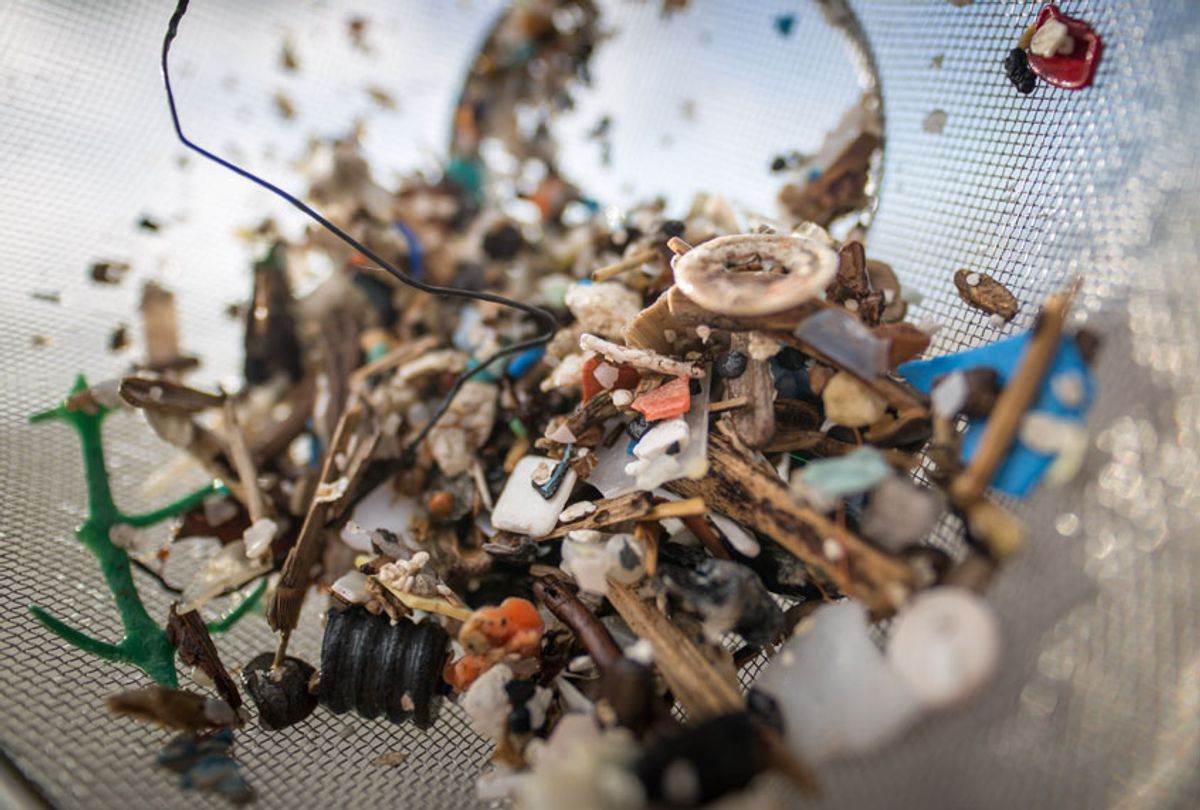 A volunteer of the NGO 'Canarias Libre de Plasticos' (Canary Islands free of plastics) carries out a collection of microplastics and mesoplastic debris to clean the Almaciga Beach, on the north coast of the Canary Island of Tenerife, on July 14, 2018. (Getty/DESIREE MARTIN)
--

"Finding Nemo" depicted the vast Pacific Ocean as, for the most part, a pristine, cobalt blue stretch of marine life. But in reality, anyone traversing the Pacific between California and Hawaii would get pieces of plastic stuck to their face, and pass through abandoned plastic laundry baskets and fishing nets that once caught marine wildlife. That's because there's a lot of trash in the ocean, but also because the Great Pacific Garbage Patch — which now has two distinct sections, one in the east Pacific and one in the west — revolves in a slow vortex that passes through this area.

Ben Lecomte is currently witnessing this massive pollution crisis firsthand, as he swims through the largest patch of garbage debris in the world for an effort known as the Vortex Swim. This week on Instagram, Lecomte,  a professional long-distance swimmer, said that the researchers that are accompanying Lecomte on his mission have broken a record.

“Today we found 2,409 microplastic pieces in 30 minutes, more than one every second,” Lecomte posted. “We are getting to a point where we don't even have enough time to count all the fragments we find during our 2 daily tows.”

Microplastics are particles of plastic that are smaller than five millimeters. The exact quantity of  microplastics in the oceans is unknown, though they have been found in every one of Earth's oceans, including in the deepest and most remote parts. According to a report from February 2019, over 690 marine species, including microscopic zooplankton and whales, had ingested microplastics. Last October, researchers found microplastics in stool samples from every single human subject tested, suggesting they are ubiquitous even in our species.

How does all of this plastic make its way to the ocean, and how does it make its way into our bodies? John Hocevar, Oceans Campaign Director of Greenpeace, explained to Salon that every minute of every day, the equivalent of a dump truck of plastic enters the ocean.

“We have put so much plastic into the environment at this point that it has gotten into everything around us,” Hocevar said in an email. “Plastic is in the food we eat, the water we drink, and the air we breathe. Everywhere scientists have looked, they have found plastic, from the Arctic to the Antarctic, and from the tops of remote mountains to the bottom of the deepest trench in the Pacific.”

It is not so much the particles of plastic, but the chemicals that are commonly used in packaging, which are carcinogens and endocrine disruptors, that are a threat to marine and human health.

“It is difficult to say for sure how many people's reproductive health problems or cancer diagnoses stem from our widespread use of plastic,” Hocevar said. “We know that these chemicals are dangerous, and we know they are entering our bodies through plastic packaging.”

Microplastics in the ocean act like sponges and can attract other contaminants, which can end up in our food system.

“When these microplastics are eaten by marine life, they enter the food web and can end up in our seafood,” Hocevar said. “They are also in sea salt. There is so much plastic in the ocean that if you try to evaporate seawater to produce salt, you inevitably will end up with plastic in there too. Plastic is now found in about 90% of all samples of sea salt.”

Perhaps most disconcertingly, little is known about how microplastics affect human health. According to a recent report published this week by the World Wildlife Fund — via research done by the University of Newcastle, Australia, on microplastic ingestion — humans are at risk for ingesting around five grams of plastic per week. In The journal Environmental Science and Technology, researchers also reported that Americans consume an estimated 39,000 to 52,000 microplastic particles per year from seafood, water, sugars, salts, and alcohol.

Associate Professor Laurence Macia told Salon last October that if microplastics are just being rejected through feces, there could be a minimal effect on the human body, “yet they might affect the function of the cells lining the gut (called epithelial cells) which can have an impact on gut integrity.”

“There is a significant research gap in this area,” Macia said. “How microplastic might affect gut and immune function is poorly known, but raising awareness is relevant as we did not evolve with such components and they could have an adverse effect on health (which has to be determined).”

Hocevar of Greenpeace says there is little that can be done to remove microplastics from the ocean.

“Ocean currents have circulated microplastics all over the world, and the ocean is so vast that we will probably never be able to remove more than a tiny fraction of our plastic waste,” Hocevar said.

But not all hope is lost.

“Fortunately, now that we are starting to understand how serious the plastic problem is, we can move quickly to solve it, or at least keep things from getting worse,” Hocevar said. “The best way to keep plastic out of the ocean is to stop making it. . . . Businesses need to rethink how they get their products to customers, or governments will start making those decisions for them in order to protect our oceans and human health.”