It's time to talk about preserving historical sites on the Moon

Over 70 years, humans left 40,000 pounds of equipment behind on the Moon. Should we preserve this lunar history? 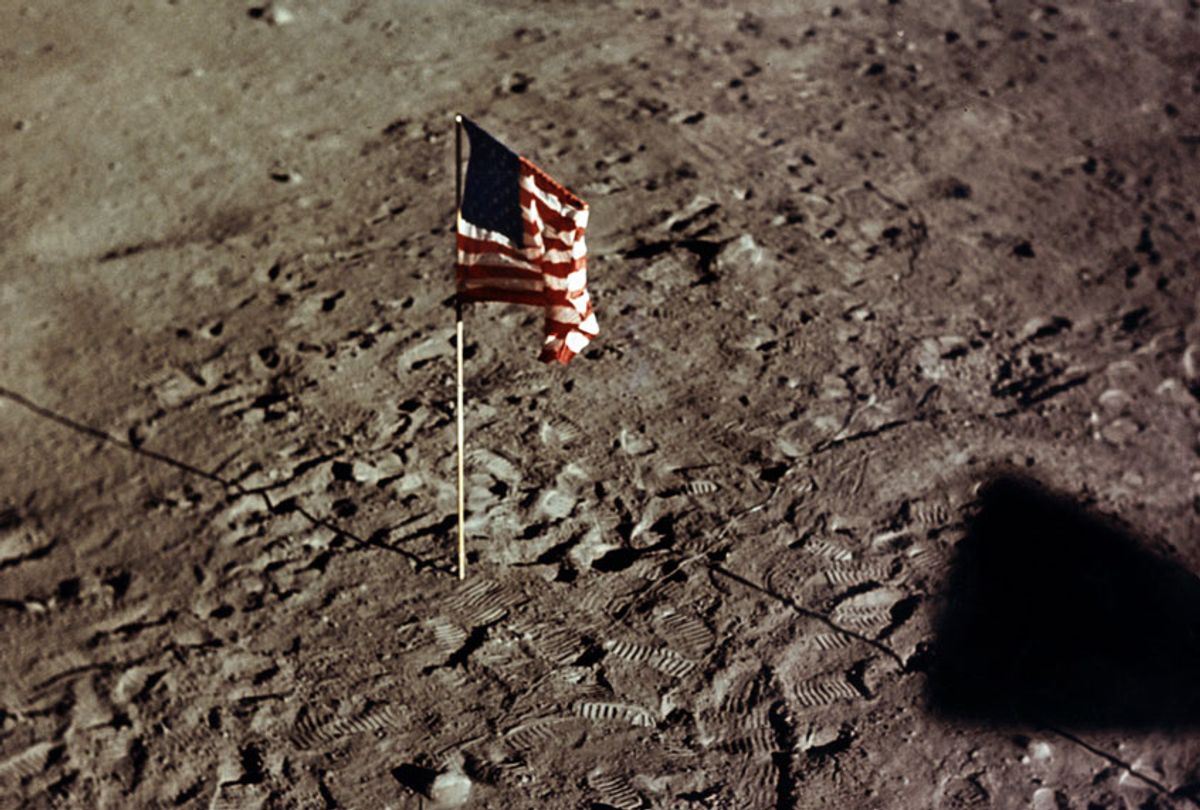 Picture taken from the Apollo XI Lunar Module (LM) showing the flag of the United States and the footprints of astronauts Neil A. Armstrong and Edwin E. Aldrin on the surface of the moon, 21 July 1969. (- / NASA / AFP)
--

It has been nearly 50 years since the Apollo 11 Moon landing, and Neil Armstrong’s footprint is still there — along with more than 100 items in the Sea of Tranquility, which includes shovels, rakes, television cameras, a plaque, human waste and more. As more missions are planned to go the Moon — national missions, but also private ones — conservationists are pushing for policies to preserve what has been left on the Moon. It makes sense, as it is, in many ways, a human archaeological site.

“In archaeology, you can go back 100,000 years and look at Homo sapiens,” Beth O’Leary, an anthropologist at New Mexico State University who leads the Lunar Legacy Project, told Salon. “And I would rank going to another celestial body the same as with the discovery of fire and the building of architecture and scien[tific] discovery.”

“The idea that we as a civilization and as a species we can leave the Earth is extraordinary,” she added. “[The Moon] isn’t in a cultural vacuum — we have taken our culture to another place; the Apollo 11 site is probably the most extraordinary site of human behavior in humanity.”

Apollo 11 is not the only mission that left things behind on the Moon. There are more than 70 spacecraft on the lunar surface, which include rovers, modules, and crashed orbiters, among other items that other missions have left behind. It is estimated that  400,000 pounds of man-made material remain on the Moon. Leaving equipment behind helps missions keep costs low, and opens up space to return to Earth with rock samples.

Yet while the Moon has been described as a “dumping ground” in space, the things we have "dumped" there are also archeological treasures. That is true not merely because of the historical significance of humans' lunar artifacts, but because of how most items left there remain pristine, including much of what was left behind by the Apollo 11 mission. The Moon has no atmosphere, so there is no erosion by wind, water, or other elements. Nothing gets washed away. There is no volcanic activity. The biggest threat to objects on the Moon are space rocks and meteorites — legitimate concerns, but by Earth standards, benign natural preservation on the Moon is much more reliable.

"[The Moon's] remoteness has preserved it to a great extent,” O’Leary told Salon, adding that her colleague has described what has been left on the Moon as “time capsules.”

The Outer Space Treaty, in effect since October 1967, is the foundation of space law, and holds that nations that left objects or structures on the Moon retain ownership of them. No efforts have been made to protect any artifacts on the Moon yet, and there are few provisions in the treaty that can guide the effort. But legally nothing is protected, so as soon as they are no longer remote they are vulnerable.

“As time passes, things break down . . . .  one thing to think about if you have commercial interests and you have tourism and places that people want to go and activities that are going to happen, and when that happens, even inadvertently, things could be lost,” O’Leary told Salon, pointing to Antarctica as an example.

Mark Lupisella, an exploration research and development manager at Goddard Space Flight Center, told Salon there are other reasons to preserve items on the Moon, such as a means to study human contaminants on the lunar surface. Lupisella said this will give scientists more insight into how human contaminants will evolve on Mars.

“There are folks like myself who want to get back and get samples before there are more contaminants so we can understand what happened with the original humans,” he explained. “How big is the spread of the contamination? What is the nature of it? What if anything has happened to the biological material left on the Moon, like space diapers?”

Of course, there is one hang-up: Mars isn’t the Moon. The conditions are similar, but not identical. Nevertheless, it is the closest researchers will get to understanding what happens to what humans leave in space.

“The Moon is a different environment than Mars, but nevertheless it is the only off-Earth experiment we have done,” Lupisella said. “It is a longterm experiment, and it is hard to get data on longterm things — that is why we like to preserve this oxymoronic pristine contaminated environment.”

Lupisella said there is a sense of urgency as space tourism remains a possibility. “We want the contamination as it is now, not with new contaminants introduced,” he said.

When asked if the contaminants are affecting the lunar surface in a negative way, Lupisella said NASA is concerned, but it is not a priority.

“It is not exactly at the forefront, but I have had a number of conversations with people trying to do more on that front,” he told Salon.