Whether it’s the big holiday or a quick snack, jiaozi means much more than a filling breakfast 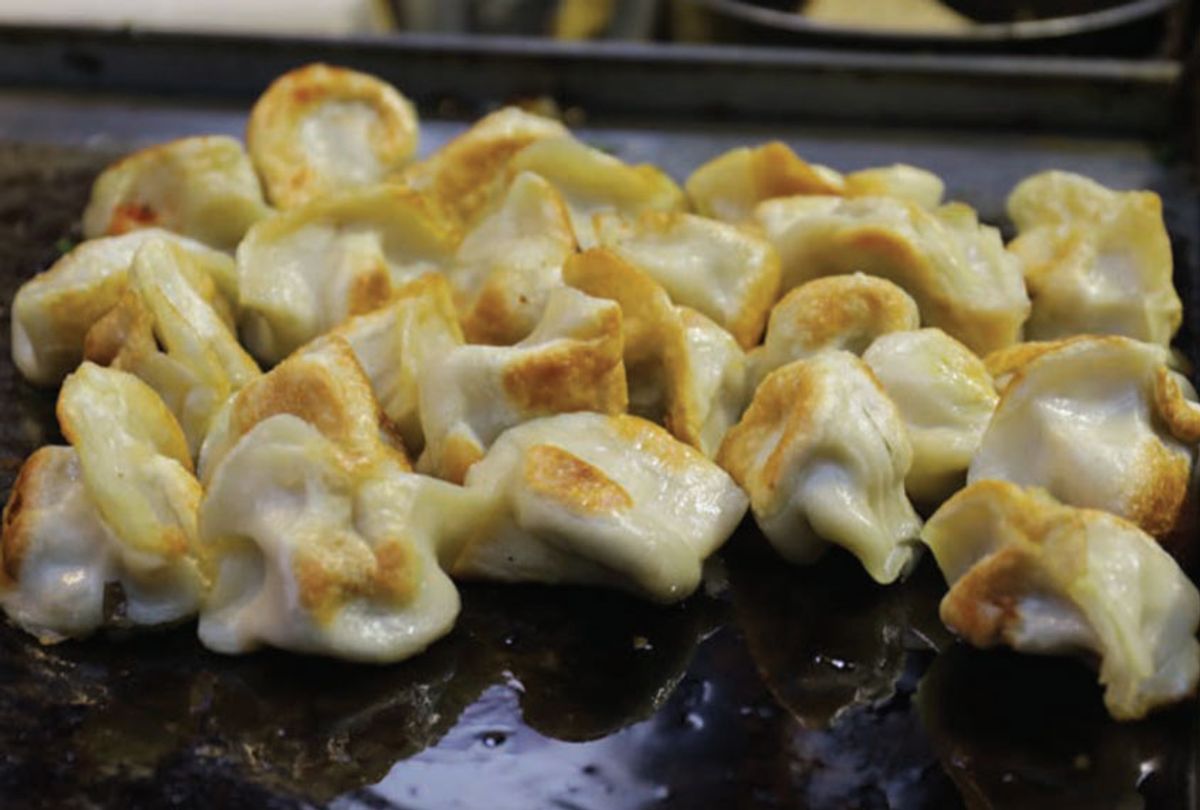 Most culinary cultures on the globe have a few characteristic dumplings. To the Chinese, on the other hand, dumplings account for an entire school of cooking. In the South, cavernous dim sum halls teem with metal carts rolling around to tables, offering little morsels that are steamed, fried, boiled, baked, and griddled. All manner of filling stand to be the surprise in the center. Of course, regional differences abound, lamb in the Muslim-influenced Northwest, wild mushrooms in the deep Southwest, seafood along the southeast coast. In the Northeast, however, though you may find some dumpling diversity, the pork and cabbage jiaozi rule breakfast. The dumplings of Heilongjiang, Jilin, and Liaoning Provinces are also the simplest and oldest on record. The first mention of these particular jiaozi in literature dates back to 256 BCE.

In the late 1990s, Howie taught English in rural Liaoning Province. When he first arrived, site and language unseen and unstudied, one of the Chinese teachers, Mr. Zhu, felt it his duty to give Howie an intensive lesson on street food, and notably, dumplings. It was love at first bite. Mr. Zhu reminisced fondly about jiaozi, its relation to family bonds and fortune. “The jiaozi is the shape of an old Chinese gold ingot. That means for every dumpling you eat, you are increasingly lucky, and may get rich!” Throughout millennia, during Chinese Spring Festival celebrations, families get together and as tradition maintains, fill dumplings as a team, in hopes of bringing new fortune in the coming year. Whether it’s the big holiday or a quick snack on the morning commute, jiaozi means much more than a filling breakfast.

• 1 (16-oz) package wonton or gyoza skins, round preferred
• Water for sealing the dumplings, plus more for steaming

To fill the jiaozi with pork filling:

In a large mixing bowl, thoroughly combine all of the Pork Filling ingredients.

To fill the jiaozi with cabbage and egg filling:

Squeeze handfuls of cabbage to get rid of any liquid and place in a separate large mixing bowl. Add the remaining Cabbage Filling ingredients. Finely chop the scrambled eggs and add to the bowl, mix thoroughly.

In the middle of one wrapper, place 2 teaspoons of filling. With a wet finger, moisten the edges of the wrapper. Fold the wrapper in half around the filling and seal by pinching the edges completely. Optionally, you may fold pleats where the edges meet, thereby creating a little purse, rather than a half-moon. Repeat with the remaining filling and wrappers.

Prepare steamer baskets by lining them with cheesecloth or parchment paper. Place the filled dough parcels atop the lining in a single layer. If you have stackable steamer baskets, continue to fill baskets. Otherwise, steam dumplings in batches. Cover the steamer basket(s) with their matching lid.

Place a skillet or pot over medium heat, fill with 2 inches of water, and bring to a boil. Carefully place the steamer baskets atop the pot of boiling water, cover, and steam the dumplings for 10 minutes.

In a mixing bowl, whisk together the dipping sauce ingredients. Serve jiaozi along with a bit of dipping sauce.