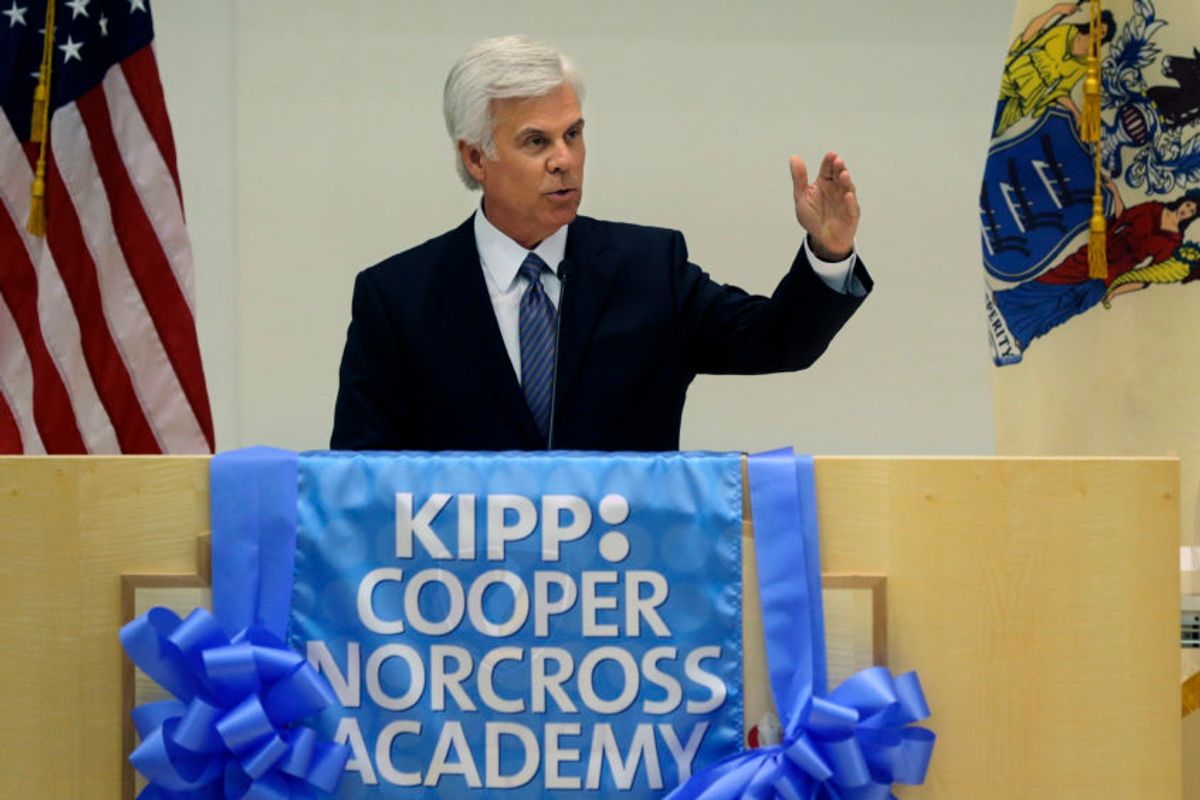 FILE - In this March 5, 2014 file photo, George Norcross, addresses a gathering at a groundbreaking ceremony in Camden, N.J., for a new kind of school that Norcross' family foundation will help fund. Camden, one of the country's most impoverished cities, will get some time in the Democratic convention spotlight Thursday, July 28, 2016, with some help from Lady Gaga. Norcross and the Senate Majority PAC are hosting the invite-only "Camden Rising" event Thursday afternoon with invites going out to all of the convention's delegates, hours before Hillary Clinton accepts the Democratic Party's nomination. (AP Photo/Mel Evans, File) (AP)
--

You can tell a lot about the feudal nature of New Jersey power politics by the media stir made over a two-year video of George Norcross III, South Jersey’s unelected Democratic boss. musing about a wide range of topics — from the likelihood that there was a conspiracy behind JFK’s assassination to the “genius” of Donald Trump.

The video was resurfaced by the Intercept, which made much of Norcross’ observations that Democrats had made themselves vulnerable to Trump because they were too soft on immigration and as a consequence lost ground with a certain slice of working-class voters. But there was so much more to it.

Norcross sits atop a sprawling nexus of insurance, health care and philanthropic enterprises in New Jersey, and is one of those wealthy Democratic National Committee members who, despite some progressive rule changes post 2016, will have an oversized role in picking his party’s presidential nominee next year.

He has taken a leading role in the revitalization for all things in the struggling city of Camden, including reforming public education and public safety. While his civic engagement has burnished a national reputation as a philanthropist, WNYC and ProPublica have reported that of the $1.6 billion in controversial New Jersey Economic Development grants given out to Camden, Norcross and businesses connected with his family were beneficiaries of $1.1 billion of that state stimulus.

His boss-like hold on political power ties back to his family, his material means, decades of philanthropy, and a track record for making investments in Camden that have produced results in terms of improved school performance and crime reduction.

Norcross also has considerable control over who gets to run for what. His political partnership with former Republican Gov. Chris Christie and elements of the Essex County Democratic machine kept non-machine Democrats on the outside looking in for years.

Since Norcross beyond the reach of voters, he does not have to submit himself with any regularity to interviews with reporters. meaning he can control the settings in which he pontificates — because he owns the room and the people in it.

Such was the case with the sit-down he granted the Camden Chamber of Commerce in 2017, where he was “interviewed” as part of the organization’s “Game Changer Series” by Dr. Michael Williams, dean of the School of Business and Management at Thomas Edison State University.

It was one of those obsequious encounters where the questioner has put careful thought into how best to use the format as an homage in flattery to the guest. In banana republics this format is offered up as journalism because the dictator-leader is taking questions like "When did you know that you were so extraordinary?"

That’s not to say that I did not learn a lot from the hour–long exchange.

I discovered that, like myself, Norcross was not a college graduate. He described how from a very early age he accompanied his father, George E. Norcross, president of the AFL-CIO Central Labor Union of Camden and Gloucester Counties, to political meetings.

A graduate of Pennsauken High School, Norcross schooled himself in the ways of the world, he said, by watching brilliant lawyers in their trial practice. As an avid student of history, he has a near-encyclopedic knowledge of what’s contained in most of the nation’s presidential libraries and has a penchant for going to the places where history was made, like the Texas School Book Depository in Dallas, where he took his children to see Lee Harvey Oswald’s view from the sixth floor of that infamous warehouse. “Now, I also think there were others involved in that,” offered Norcross.

As a working journalist, I would have followed up on this observation, but it might have taken the interview off the pre-programmed agenda.

Norcross told Williams that he valued loyalty more than any other human attribution and prided himself “on being street smart,” which manifested in his contrarian views on the state of New Jersey’s plans to build a multimillion-dollar aquarium as part of a bid to revitalize the Camden waterfront.

“Some of you would be aware that I have not been a supporter of the aquarium,” he said. “An aquarium is a wonderful thing to have. I call it a $150 million fish tank that was built by some politicians in north Jersey, who thought somehow it was going to revolutionize the city of Camden.”

He continued: “When I looked at it, I said, one block away you can get murdered by drugs or by sex all on the same block except we have a fish tank sitting there. That money should have been spent of revitalizing neighborhoods, creating better public safety, better public education. I am not the smartest guy in the world, but you have got to deal with fundamentals.”

Norcross offered the audience a succinct behind-the-scenes view of how he and other southern New Jersey boosters are able to punch above their weight in terms of statewide and even national political influence. “We have managed in the last 15 years to consolidate our elected leadership to act as one,” Norcross told the 2017 Camden crowd. “And it is simple math. We are just 28 percent of the state. In order for us to get our fair share we have to be unified and the rest of the state has to be divided.”

It was in this same iconoclastic, populist tone that Norcross expressed a weird admiration for Donald Trump who, he said, “borders on genius and insanity.” He credited Trump with being more in touch with the American zeitgeist than Hillary Clinton was because during the last three weeks of the 2016 campaign Trump “focused on what people were thinking and what was on their minds, and Hillary Clinton did not. He focused about things people were angry about. He talked about how they could be improved, about how they could be changed.”

To Norcross, as “a conservative Democrat,” immigration appeared to be the main irritant for that core working-class constituency Trump zeroed in on in states like Pennsylvania, Michigan, Wisconsin and Ohio, which had voted for Barack Obama twice but in 2016 flipped to Trump.

He continued, “I think a path to citizenship is the right thing. But if you are a criminal you don’t belong here, and the American public doesn’t want it. Why do we as a party support that? I don’t understand it, and that’s why the Democratic Party has not been attractive to certain elements of the working class of our country.”

Once again, the lack of journalistic inquiry presented itself as the moderator of the event did not press Norcross to substantiate his claim that Democrats were expressly supporting the retention of immigrants who are criminals, asTrump has long charged. That just hung in the air as an ex-cathedra pronouncement that has now come back to haunt Norcross.

Nor was it mentioned that Obama had deported more than 5 million undocumented people and was actually nicknamed “the deporter in chief” by immigration rights activists for his program targeting those with criminal histories for removal.

Conflating undocumented immigrants with criminals has been a key part of Trump’s daily attacks on the immigrant population, his principal method of consolidating his base.

There’s a significant body of academic evidence that, contrary to right-wing propaganda, undocumented immigrants have a lower propensity for criminal behavior than the general population. There is of course the example of New York City, where the influx of hundreds of thousands of immigrants, many of them undocumented, stabilized crime-ridden neighborhoods and drove rates of violent crime in the city to the lowest level in several generations.

In the two years since Norcross’ musings, Trump has made the southern border with Mexico and his multi-billion-dollar wall such a fixation that he was willing to shut down the federal government for more than a month, depriving hundreds of thousands of federal employees their paychecks.

Since 2017, conditions for immigrants seeking asylum have greatly deteriorated and a recent Homeland Security inspector general report found at both California and New Jersey holding facilities there were “immediate risks or egregious violations of detention standards," as well as “nooses in detainee cells” and “inadequate medical care.”

In January, a Department of Health and Human Services inspector general report disclosed that the Trump administration had not accurately “represent the full scope of [child] family separations” and that “thousands of children may have been separated during an influx that began in 2017, before the accounting required by the court. In addition, as of early November 2018, HHS has received at least 118 separated children since the court order.”

In response to the recent reporting on his 2017 comments in the Intercept, a Norcross aide tried to do damage control by adding context to the embarrassing remarks.

“George has always supported legal immigration, explicitly called for a path to citizenship for any undocumented immigrants here now and disagrees with the actions taken in the last few years to limit it without seeming justification or process,” wrote a Norcross aide in an email to the Intercept. “The United States, like every developed country in the world, has immigration laws that allows for the legal entry of people who wish to come here, including — and especially — people who are seeking amnesty or asylum. Those laws should be respected by those who want to come here and must be respected by the government itself.”

Such are the perils of getting only softball questions when we have a xenophobic racist in the White House.