Stephen Miller wants zero refugee admissions in 2020. He may (almost) get it 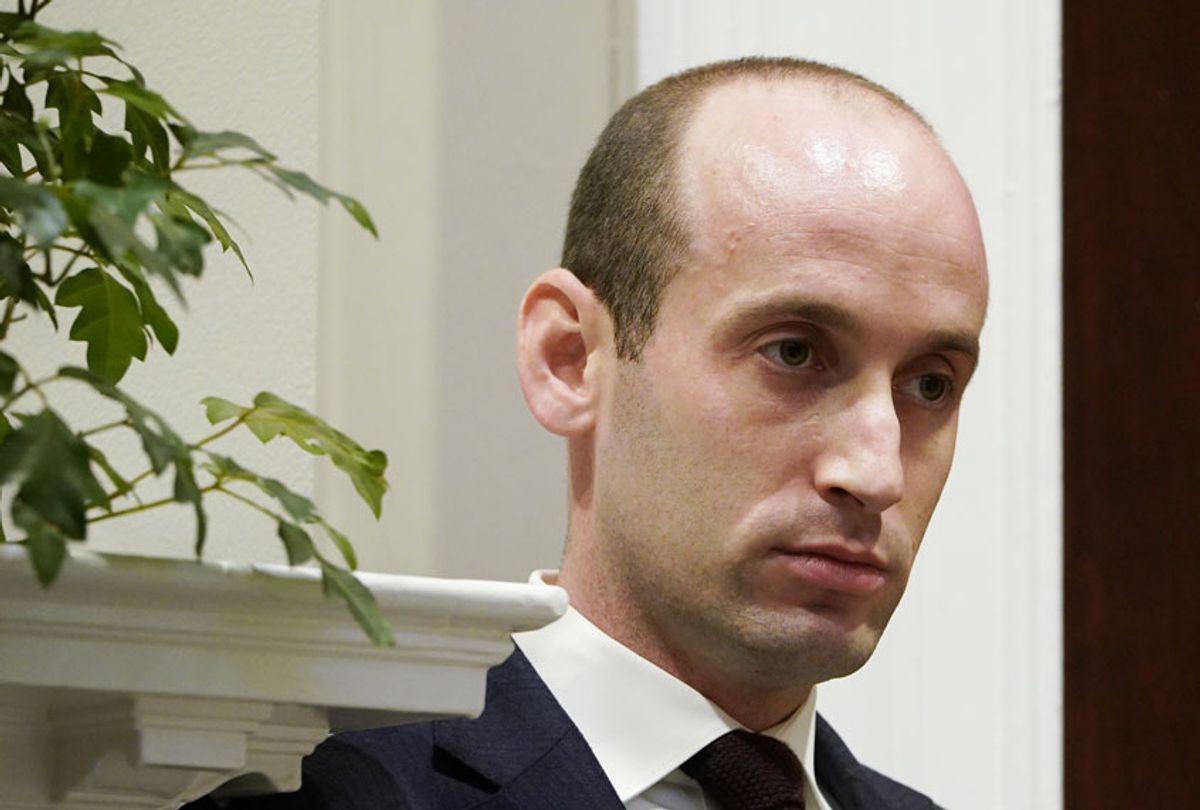 Trump adviser Stephen Miller, a hardline immigration hawk who has quietly taken over the administration’s border policy, is pushing to stop all refugee admissions to the United States.

Miller allies urged the administration to slash refugee admissions to zero during a key meeting with security officials last week, Politico reported. U.S. Citizenship and Immigration Services official John Zadrozny and State Department refugee chief Andrew Veprek, whom Politico described as “proxies” for Miller, argued that the government needs to severely limit the number of refugees allowed to enter the U.S., due to unspecified “security concerns.”

Homeland Security officials at the meeting instead proposed cutting the current number of refugees admitted by up to 90 percent, according to the report. The department suggested capping the number of refugees between 3,000 and 10,000 a year.

The Trump administration has already slashed the number of refugee admissions by a third this year, to 30,000, despite pleas from former Defense Secretary Jim Mattis to keep the cap at 45,000.

The proposal from Miller’s proxies, who have each been installed in their positions in the past year, “alarmed” Defense Department officials who expressed concern that the move would prevent Iraqis who had assisted U.S. troops from being able to enter the country, according to the report.

Mattis argued last year to national security adviser John Bolton, in a letter obtained by Politico, that drastically reducing the refugee cap would betray the Iraqis who had risked their lives to aid American troops.

"Over the last 17 years of war, numerous Iraqi nationals have risked their own lives and their families' lives by aligning with our diplomats and warfighters providing essential mission support. We owe them support for their commitment,” Mattis wrote.

The Trump administration did not heed Mattis’ warning and slashed refugee admissions to 30,000, but stopped short of the more drastic cuts that many feared, and that now appear to have been floated once more.

A mere 140 Iraqi applicants have been allowed to enter the U.S. this year while more than 100,000 remain in the queue, according to Reuters.

It’s unclear what supposed security concerns Miller’s allies are so concerned about. The Cato Institute, a libertarian think tank founded by billionaire Charles Koch, published an analysis earlier this year that showed the chance of being killed in a terrorist attack by a refugee was about 1 in 3.86 billion per year while the annual chance of being killed in an attack by an undocumented immigrant was zero.

David Inserra, a policy analyst with the right-wing Heritage Foundation, told Politico that it is absurd to suggest that all refugees pose a security risk.

“Even if you’re really hesitant about certain types of conflict-torn areas, I still think there are other areas that are not of concern,” he said. “There are enough refugees out there in the world that I think you could find more folks that you’re not particularly worried about.”

The proposal to shut down or drastically slash refugee admissions comes just days after the Trump administration announced a move that would effectively bar the vast majority of asylum seekers from seeking asylum in the U.S. This new regulation would require them to first apply for asylum, and be rejected, in any other country they pass through. Two lawsuits have been filed seeking to block the move.

“The United States used to be a leader in providing refuge to those in need, all around the world. We can’t say that anymore. It is beyond shameful and a new low, even for this administration, to even consider accepting no refugees to the U.S.,” said Ryan Mace, the grassroots advocacy and refugee specialist for the group.

“People are in need all over the world — families, children, human beings with unique stories and lives on hold. Zero will never be an acceptable number for any country let alone a country with so many resources and people willing to welcome new neighbors looking to rebuild their lives in peace and safety.”