Summer TV: It's even hotter inside these reality shows, where contestants play with fire

Go make something, you lazies. Be inspired by "Forged in Fire" and "Blown Away," Netflix's glassblowing competition 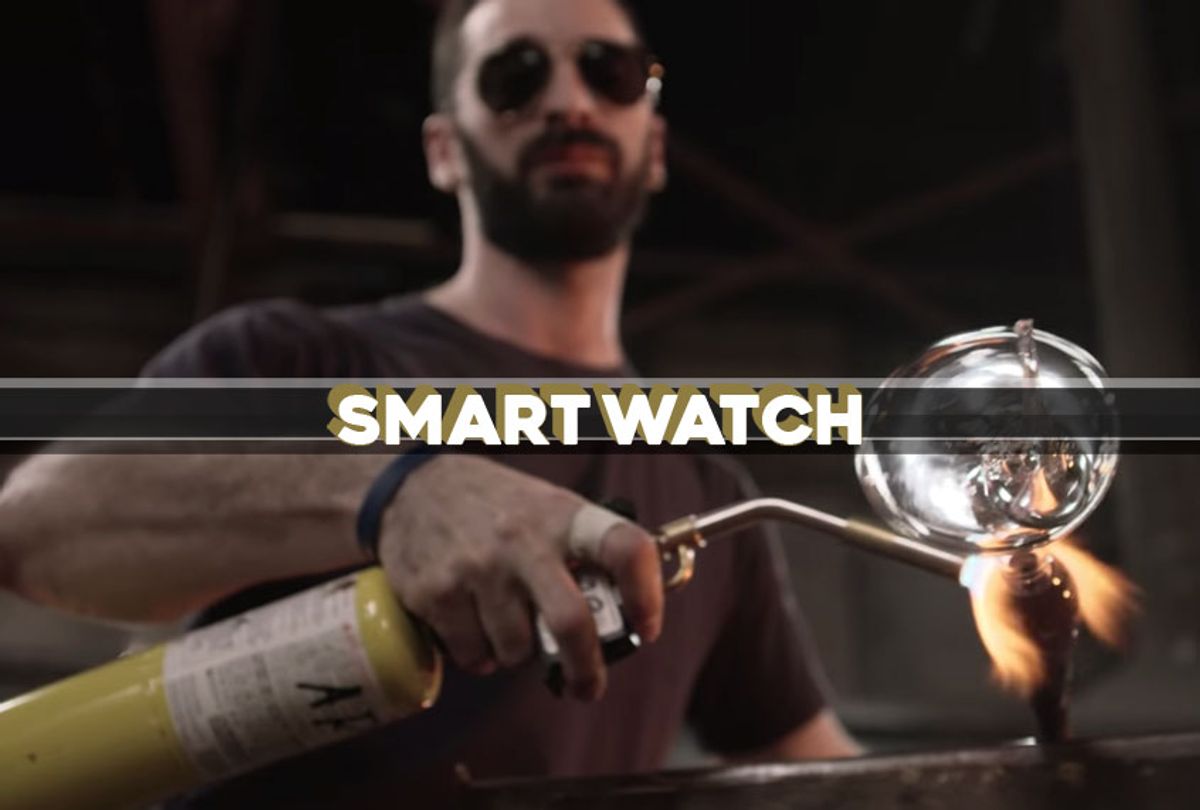 Tech-enabled convenience, rampant consumerism and a culture-wide exhaustion would appear to indicate that Americans have abandoned any desire to make anything harder than a sandwich.

On the other hand, axe throwing is thing. In some cities, it’s the new darts.  We might be an exhausted people, but we are also frustrated.  We may order takeout multiple times per week, but the maker impulse remains strong in many of us. Television knows this.

That’s why there are so many reality competition series featuring home cooks and bakers going head-to-head with their skills, a natural off-shoot of the artistic competition genre kicked off so many years ago by “Project Runway.”

But there are Etsy and bake sale people, and there are folks who interpret the phrase “get medieval on your ass” as a lifestyle choice.  The two may co-exist — and at many renaissance faires, they often do! — but they might not watch the same shows. One enjoys a precise oven, and the other is fascinated by the dangerous and mercurial nature of flame. That, and she probably would like to cut you.

Calm down, blade aficionados — this is not to insinuate that you are all weird LARPers or would-be Hannibal Lecters, tamping down an urge to flense and flay. But as someone married to a former “Cutlery Corner” addict, a gentle guy who slices open his utility bills using any number of hand-forged blades, I have some knowledge of your kind. You are connoisseurs of art. You’d  simply like your art to slice through frozen ham.

All of this is to say the appeal of “Forged in Fire” is easy to understand.  It’s an artistic competition hosted by handsome former Army Ranger Wil Willis, a guy who also probably keeps a blade handy to open birthday presents, because that makes perfect sense. The medium is white hot metal, and the goal is to produce a piece that makes edged weapon combat specialist Doug Marcaida declare, “It will kill.”

That’s the true goal of this goofy but fascinating series, to watch Marcaida take one’s handmade blade and go at some very tough object with it, whether that's a dummy, a heavy bag filled with sand, some wood or a piece of meat. Marcaida is a polite guy who loves what he does. And what he does is handle edged metal with an appreciative smile before he impressively slices and jams it into things.

Marcaida is one of several judges on the series, but he’s basically the Tim Gunn of “Forged in Fire,” in that he’s the man contestants need to impress not only with the look of the blade but its utility. David Baker is another favorite; you can’t help but love a man who unironically sculpts his mustache into an old-timey style. He’s right at home on a show that welcomes many impressively bearded contestants, as well as its share of hipsters.

The main fascination, of course, is observing the process itself. Like all competition series, “Forged in Fire” has a time-pressure element, starting with four bladesmiths competing in three elimination rounds. Eventually it gets down to two, with one person taking home the day’s prize of $10,000.

But metal is a tricky devil in ways that other mediums are not, which somewhat evens the playing field. A blade may look flawless but chip easily. A craftsman might be doing everything correctly as far as he can tell, only to have everything fall apart on him. Baking under a time constraint looks much easier, frankly. I say this as a lifelong baker, one whose husband has been known to open boxes of cake flour with a spring-assist blade that looks like something the Predator would use.

Owing to all of these factors, “Forged in Fire” is a competition that anyone with any level of experience can win, lending it an air of unpredictability that’s exciting. The process itself is mesmerizing to observe, but it can be shocking to watch a bladesmith with many years of experience be bested in the end by a man who’s been forging for a year and a half — which actually happened in the episode that aired on June 26.

The only drawback to “Forged in Fire” is that it’s not an artistic endeavor that you can take up at home without substantial financial output and serious safety protocols in place. But local classes exist to feed your creative flame, and isn’t that the next best thing?

Well, no. The next best thing might be to binge the show on Hulu alongside its sporty spinoff “Forged in Fire: Knife or Death,” where people who love knives and swords move through a timed obstacle course, doing their best to chop objects that may be moving, or very durable, or not completely thawed chunks of meat. What a country!

There are blade lovers who appreciate the art of forging, and there are nerds who just want to save up to buy a Klingon bat’leth to hang on their wall. For those folks, this cheeseball movie-centric series hosted by Danny “Machete” Trejo is the perfect red meat.

“Man at Arms” is actually a pretty fun series if your goal is to geek out over cool hardware from favorite films and video games, which is exactly what Trejo does with the stuntmen, stuntwomen and martial artists who join him during any given week.

Each week features a couple of specific weapons that the show’s in-house crafts team forges for the series. The second season included a “Game of Thrones”-dedicated episode in which the team recreated and played with the Viper’s spear and Oathkeeper, for which they brought in a real-life Brienne of Tarth, in the form of Janeal Ironside, a medieval sword-fighting champion who looks like she could break just about anyone in two. Ironside put on plate armor and used the show’s forged version of Oathkeeper to destroy a shield and cut through a gel replica of a human torso, and what’s not to love about that?

To reiterate, “Man at Arms” is not for the blade sports lover, but movie geeks will find it particularly entertaining, even though Marcaida isn’t around to deliver his seal of approval, which is really the only thing that matters to some people.

Then again, it’s possible to appreciate forge-based crafting without demanding the fire produce something that cuts or kills. Some people prefer shows that yield pieces of art that play with light, or hold flowers, or something you can use to smoke weed.

For that, appropriately enough, there is Netflix's "Blown Away," which my colleague Ashlie D. Stevens has covered below for Smart Watch.

“Blown Away,” currently streaming on Netflix

“Blown Away,” a reality competition series about glassblowers, has all the predictable trappings of serialized elimination shows: an end-of-episode catchphrase (the judges weren’t “blown away” by your creation), themed challenges, guest judges, a variation of the “I’m not here to make friends” speech — competitor Deborah Czeresko introduces herself by saying, “I think I have a very polarizing personality. I have lovers and I have haters.”

But this show isn’t just bland “Project Runway” simulacra. There’s a certain drama inherent to the glassblowing process, with fire, molten materials and the potential for shattered creations. More than that, though, “Blown Away” offers viewers insight into a highly technical process that hasn’t been given a serious television treatment before — with contestants who are very serious about their craft.

Where participants on “The Great British Baking Show,” for example, just seem content to have the opportunity to perfect their Victoria sponge cakes in a balmy white tent, the ten contestants on “Blown Away” exhibit the swagger you’d expect from chefs competing on “Chopped Ultimate Champions.” With $60,000 and a residency at the Corning Museum of Glass on the line, the contestants have something to prove and all believe they — and their competitors — have the skills to do so.

“In order for me to do well in this competition, I’ll have to be on my best,” said competitor Benjamin Kikkert. “Alexander Rosenberg, he’s a very accomplished glassblower. Patrick Primeau, his technique and skill is very high. Janusz Pozniak, he comes from a very established glass community. The other glassblowers here, frankly, I just don’t know what they are capable of.”

That statement from Rosenberg points to something that is openly discussed throughout the series — namely, that glassblowing is a male-dominated field, with even the instruments typically used in the hot shop sized for men’s hands. The work displayed by artists like Momoko Schafer and Czeresko carries messages of diversity and representation, which is refreshing in a competition format like this.

But more than anything “Blown Away” is just a sheer joy to watch. It’s a succinct exploration of the world of glassblowing — perfectly bingeable at around four hours total. Hosted by the approachable Nick Uhas, former “Big Brother” contestant and science YouTuber, it’s filled with craft-specific references and humor.

I gasped when a guest judge told a contestant that their creation looked like it could be purchased in an airport gift shop, and the frequent and unironic use of the terms “gloryhole” and “Best in Blow” have already made an impact on Twitter.

By the end of the season, you’ll marvel at what can actually be made from glass — from fanny packs to fried eggs to glowing eyeballs. — Ashlie D. Stevens