America’s deadly wealth pyramid: Eric Garner stood his ground and was crushed for it

Garner scratched-out a living in the gray market. "Not today," he said when cops came for him. Now he's dead 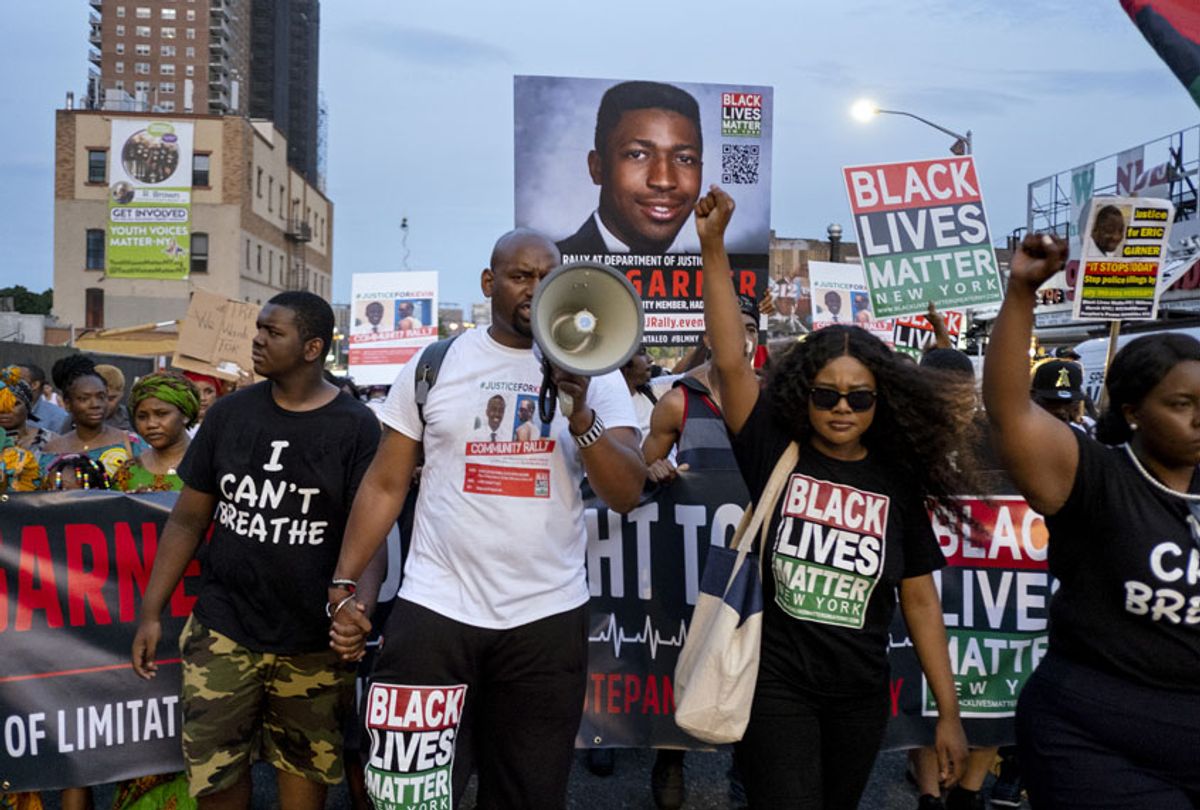 Activists with Black Lives Matter protest in the Harlem neighborhood of New York, Tuesday, July 16, 2019, in the wake of a decision by federal prosecutors who declined to bring civil rights charges against New York City police Officer Daniel Pantaleo, in the 2014 chokehold death of Eric Garner. (AP/Craig Ruttle)
--

On the fifth anniversary of Eric Garner’s homicide we were flooded with the video images of his takedown by NYPD officers. What’s been lost in this retrospective was Mr. Garner’s defiant stand minutes earlier when he was first confronted by the police for the economic “high crime and misdemeanor” of selling single individual, untaxed cigarettes.

“It stops today,” said the normally affable Garner. He knew the drill. He had been arrested before for depriving the state of the tax revenue on a pack of cigarettes that goes for $14 so as to feed his family.

The corporate news media prefers this be only about race, so they fixate on the role of the police in those traumatic moments when he was fighting to breathe. They dare not open their aperture for the essential widescreen shot of the corrupt political economy that had been squeezing him, as it does tens of millions of Americans every day as part of the drive to increasingly concentrate wealth at the top.

At 6’ 3” and 350 pounds, Mr. Garner had just broken up a fight and restored public order, before the police arrived. The 43-year-old father of six had worked as a mechanic and a city gardener before his asthma and diabetes sidelined him.

In Mr. Garner’s moment of defiance, before he became a victim, he stood on the same ground as the pre-Revolutionary Sons of Liberty who successfully resisted Britain’s Stamp Act and the farmers in Shay’s Rebellion who unsuccessfully tried to resist state economic policies that were driving them into poverty and off their land.

When the poor and working class, living in society’s shrinking margins resist even verbally, like Mr. Garner did, they risk feeling the full physical force of a legal system 24-7 . It is all about using the police to enforce the pecking order as defined by capitalist economics even if it takes lives in the process.

Liberty and justice have absolutely nothing to do with it as demonstrated in the Jeffrey Epstein case, the ongoing crime spree by our President Donald Trump, and New York’s flagrant political corruption where the wealthy can rent to own even Democratic politicians like Mayor Bill de Blasio who pitches himself nationally as a progressive but is known locally as a “transactional” kind of guy.

Against heavy odds, Mr. Garner improvised a living for himself and his family in a city that increasingly tightens the vice-grip of gentrification on working-class families. For decades I have watched these families driven out from one neighborhood after another to make way for the luxury housing that the developer-donors to the politicians built.

Here in New York City the world’s wealthiest park their money and run the show and the history of police corruption has many chapters. And, it’s always the police that are brought in to smooth out these neighborhood “transitions” that playout with the soft violence of eviction and small print of foreclosure. The power alchemy of late-stage vulture capitalism in a place like New York City transcends race.

In Mr. Garner’s case, it was an African-American NYPD Chief who ordered the enforcement action over untaxed cigarettes that proved fatal to Mr. Garner.

It was NYPD Chief of Detectives Phillip Banks III, who at the time was the department’s highest-ranking uniformed officer, who made the command decision to send police to the Staten Island location. The Daily News reported the NYPD had already had Mr. Garner’s “spot” under surveillance because of complaints the department had received about the sale of the loosie cigarettes — those sold one at a time.

Mr. Banks name also surfaced as a prominent figure in several high-profile cases that resulted in corruption convictions of other high-ranking NYPD officers as well as Norman Seabrook, former President of the Correction Officers Benevolent Association.

“Banks was eyed by authorities in connection with a sprawling corruption probe that rocked the upper ranks of the NYPD, the conviction of jails union boss Norman Seabrook and an investigation of de Blasio’s fundraising practices,” the Daily News reported

Last year the Daily News reported the lawyer representing Mr. Banks wrote to prosecutors that the former Chief of Department planned to assert his Fifth Amendment rights if he was called to testify in corruption cases involving his NYPD colleagues with whom he had frequently socialized.

Efforts to reach Mr. Banks through his attorney were unsuccessful. “Phil Banks has never been charged with any crime whatsoever, and that will not change despite the government gratuitously referring to him as an unindicted co-conspirator,” said Banks’ attorney Ben Brafman, according to the New York Post.

At the heart of the nexus in the epic corruption case were two major donors to Mayor Bill de Blasio who prosecutors alleged had bribed police officials for special treatment.

In the case of Mayor de Blasio Federal and state prosecutors in 2016 declined to bring criminal charges against the Mayor after lengthy investigations, “even as one concluded that the mayor acted on behalf of donors seeking favors from the city and the other said that some of their practices appeared to violate ‘the intent and spirit’ of the law,” according to the New York Times.

The Times reporting continued, “The federal inquiry found a pattern in which Mr. de Blasio or his associates solicited contributions from donors seeking favors from the city and then contacted city agencies on their behalf, according to a statement from the United States attorney for the Southern District of New York.”

Manhattan District Attorney Cyrus Vance, who probed potential state campaign violations by de Blasio and his aides also declined to prosecute but wrote “This conclusion is not an endorsement of the conduct at issue; indeed, the transactions appear contrary to the intent and spirit of the laws that impose candidate contribution limits, laws which are meant to prevent ‘corruption and the appearance of corruption’ in the campaign financing process.”

“We have been confident from the moment these reviews began that the actions of the mayor and our administration have always been within the law. The United States Attorney and Manhattan District Attorney have now put to rest any suggestion otherwise,” Eric Phillips, a City Hall spokesman, said in a statement. “We thank these prosecutors’ offices for conducting what were clearly diligent and exhaustive reviews — and for making public the conclusions of these probes. New Yorkers deserve honest, progressive government. With this mayor, they will always get it.”

Just step back and consider the never-ending procession of high, middle and low-level elected officials that have been convicted just in New York State and you get a sense of how endemic it is. Add in the close calls like Mr. de Blasio’s, and you can understand why this is the petri dish that produced the Trump virus.

This is the same state that took Eric Garner down for selling single cigarettes.

We need to look at the Garner tragedy juxtaposing how he was treated on these mean streets by law enforcement with the way Jeffrey Epstein was stroked by the Bush Department of Justice or the way Donald Trump is being protected by the current Attorney General William Barr right now.

Post 9/11, we see the increasing coercive power of the state manifesting as the top to bottom political corruption of the entire governing structure becomes more readily apparent. With each passing day institutions, meant to keep a check on corruption, like Congress and the Courts, appear ineffective to hold the most powerful accountable.

At the highest levels of our government, the rule of law has been subverted with impunity. But loosie cigarettes, that scourge can get you killed.