The bold new plan to stop wars: A peace advocate makes her case

"War and military occupation haven’t made us more secure. They’ve made us more hated in many parts of the world.” 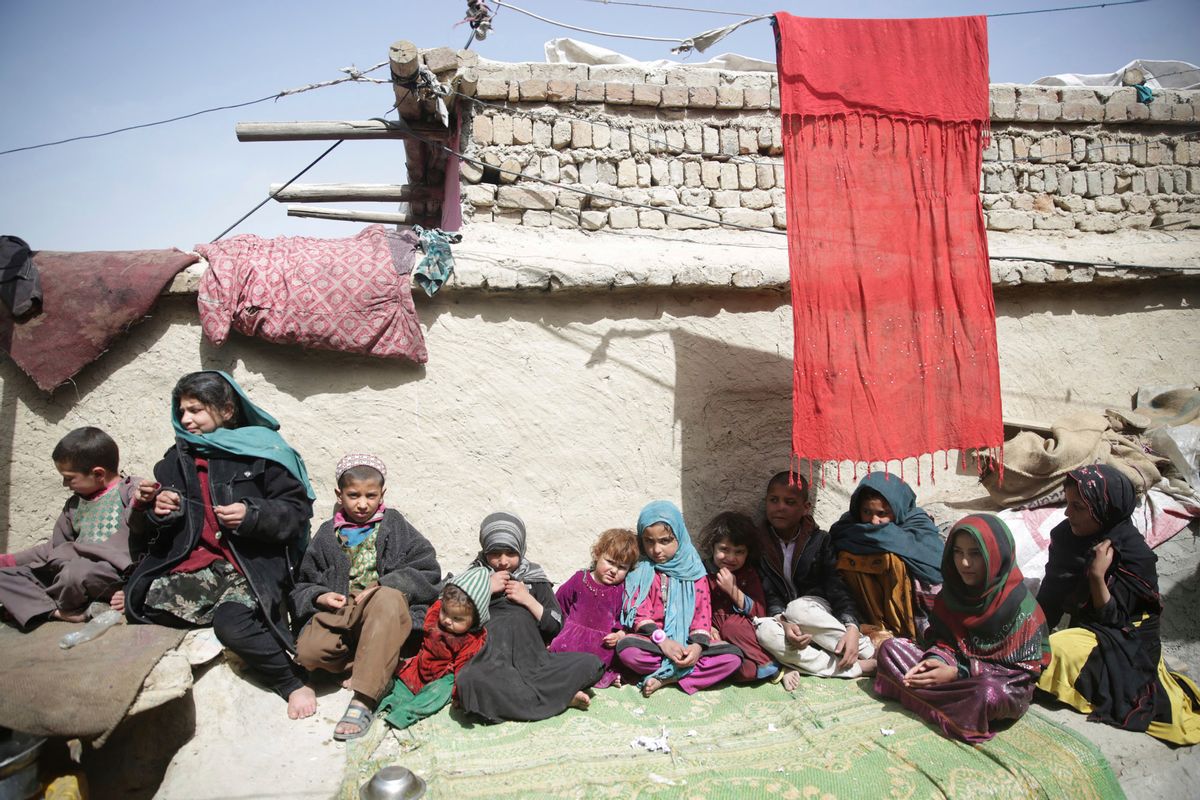 In this Sunday, March 19, 2017 photo, Children sit in the sun in their home in Kabul, Afghanistan. An aid group says nearly a third of all children in war-torn Afghanistan are unable to attend school, leaving them at increased risk of child labor, recruitment by armed groups, early marriage and other forms of exploitation. (AP Photos/Massoud Hossaini) (AP)
--

A little over 100 years ago, the major Western powers and 23 other nations signed the Treaty of Versailles, officially ending the “war to end all wars” — an idealistic phrase that within a few years would assume a certain grim irony. While there has been no truly global conflagration since 1945, the 21st century has already produced its fair share of armed conflicts.

Since 2001, US wars and military actions in Afghanistan, Iraq, and Pakistan have cost American taxpayers $5.9 trillion. These conflicts have killed more than 480,000 combatants and more than 244,000 civilians, while displacing millions of refugees. In February 2018 the Pentagon reported to Congress that the war in Afghanistan was costing American taxpayers $45 billion a year, with no end in sight. Despite this vast expenditure, none of these conflicts have been resolved.

Where the Money Is

What drives this enormously expensive engine of destruction? Partly, profits. There is a vast global industry with a vested interest in promoting armed violence. It thrives by producing ever more innovative weapons of ever greater destructive power and by lobbying political and military leaders to use them. The value of international arms transfers was 23 percent higher in 2014–18 than in 2004–08. The five largest exporters in 2014–18 were the US, Russia, France, Germany, and China.

“War is a racket,” said the American general Smedley Butler in the 1930s. “It has always been.” A highly decorated Marine veteran of World War I and a renowned critic of war profiteering, Butler argued that war “is conducted for the benefit of the very few, at the expense of the very many.”

Paul K. Chappell — a West Point graduate, Iraq War veteran, and now peace literacy director of the Nuclear Age Peace Foundation — says: “We have the most powerful military in human history and we’re some of the most terrified people on the planet. War and military occupation haven’t made us more secure. They’ve made us more hated in many parts of the world.” 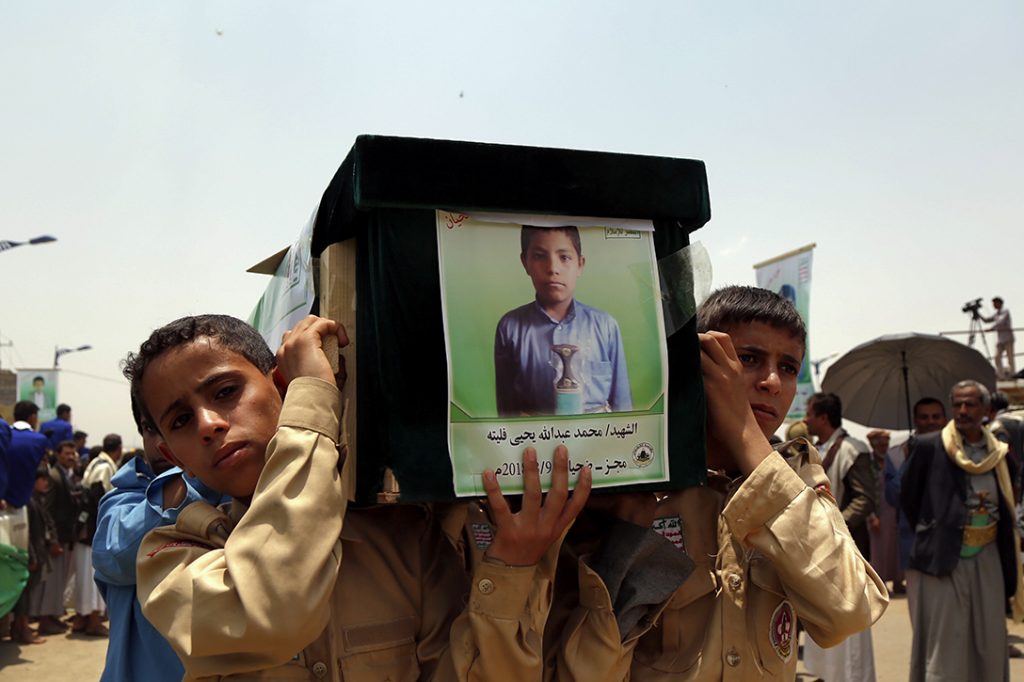 Boys carry a coffin of a child, who died in Saudi-led airstrikes that killed dozens of children in Yemen, August 13, 2018. Photo credit: © Mohammed Mohammed/Xinhua via ZUMA Wire

One rationale for high military spending is that it stimulates the economy and creates jobs — what’s sometimes called “military Keynesianism.” For example, Maryland-based Lockheed Martin, the world’s largest defense contractor, generated an estimated $44.9 billion in arms sales in 2017 through deals with governments all over the world. The company drew public scrutiny last year after a bomb it sold to Saudi Arabia was dropped on a school bus in Yemen, killing 40 boys and 11 adults.

Lockheed’s revenue from the US government alone is more than the total annual budgets of the IRS and the Environmental Protection Agency combined.

But according to a 2010 report by the Institute for Policy Studies, a $1 billion investment in military spending nets only 11,600 jobs, far less than it would generate in other industries.

What Can Be Done?

We’ve learned a lot in the past half-century about how to prevent armed conflict. From global corporations and international organizations to local peace-building efforts, we know what works, how much it costs, and who can do it.

As I discuss in my 2017 book The Business Plan for Peace, you start by scaling up 25 tried-and-trusted initiatives that can prevent local conflict from escalating into war. There are now more than 1,400 efficient, effective local initiatives preventing armed violence in Pakistan, Nepal, Zimbabwe, Sri Lanka, the Democratic Republic of the Congo, Colombia, Uganda, Somalia, Burundi, Nigeria, Mali, Nigeria, and Lebanon. That could be why you read less about those countries in the media outlets that obsessively report violence. 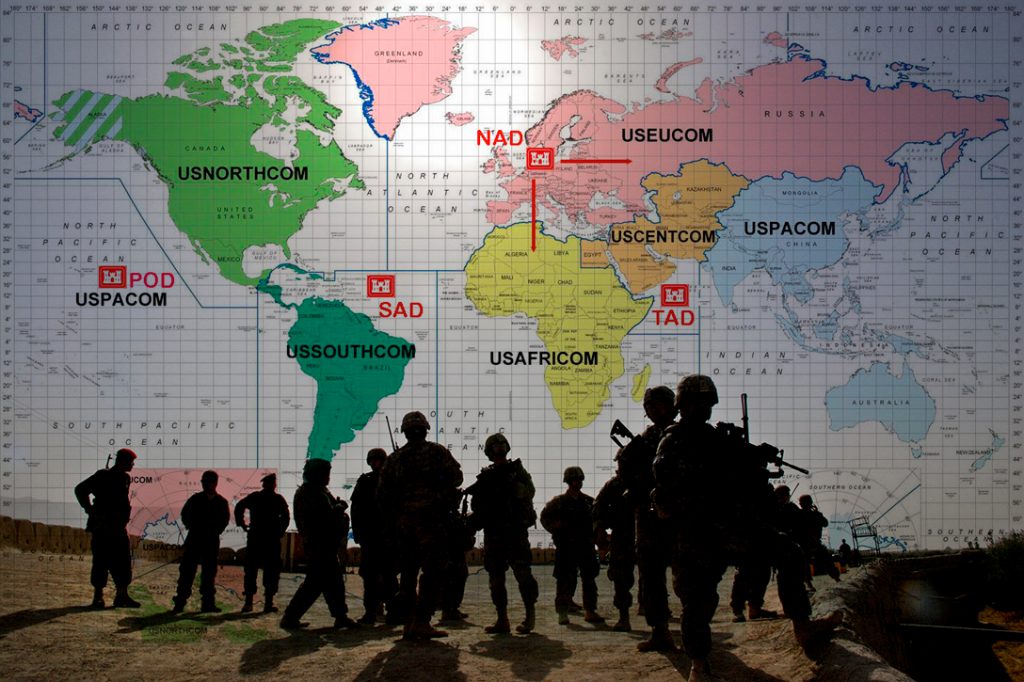 Photo credit: US Army and US Army

At international levels, a powerful way to reduce arms trading is to encourage the divestment of funds away from weapon production by key actors in the financial sector, such as pension funds, endowments, and sovereign wealth funds. Major corporations and investors are becoming alert to the advantages of divesting from unethical investments, such as arms production, since peaceful, environmentally conscious societies are beginning to be seen as a gold mine for new sources of progress and profitability.

What Ordinary People Can Do
The Business Plan for Peace has cracked the issue of how confusion, depression, and apathy can be converted into action to build community, purpose, and safety. Some examples: Brilliant millennial media minds can engage millions of their peers in actions that resolve conflicts in schools, the workplace, and the home using conflict-prevention skills learned through our online courses. Each of our graduates develops a workable, effective “peace plan” to use their own skills to address an issue that breaks their heart.

We show how “inner work” — any daily practice of self-reflection — provides the power to turn violence into understanding, while learning from heroes at the sharp end of conflict how they master their fear and anger and become able to act with presence when a crisis occurs.

Those who work in large companies can now ask to be trained in the skills that calm stress and enable communication, such as empathic listening, connecting from the heart, and enabling people to take a stand on issues they care about without being disempowered.