"Veronica Mars" contends with the mystery and tragedy of growing up

SPOILERS AHEAD! A shocking development and the end of the season thrusts our heroine into an uncertain future 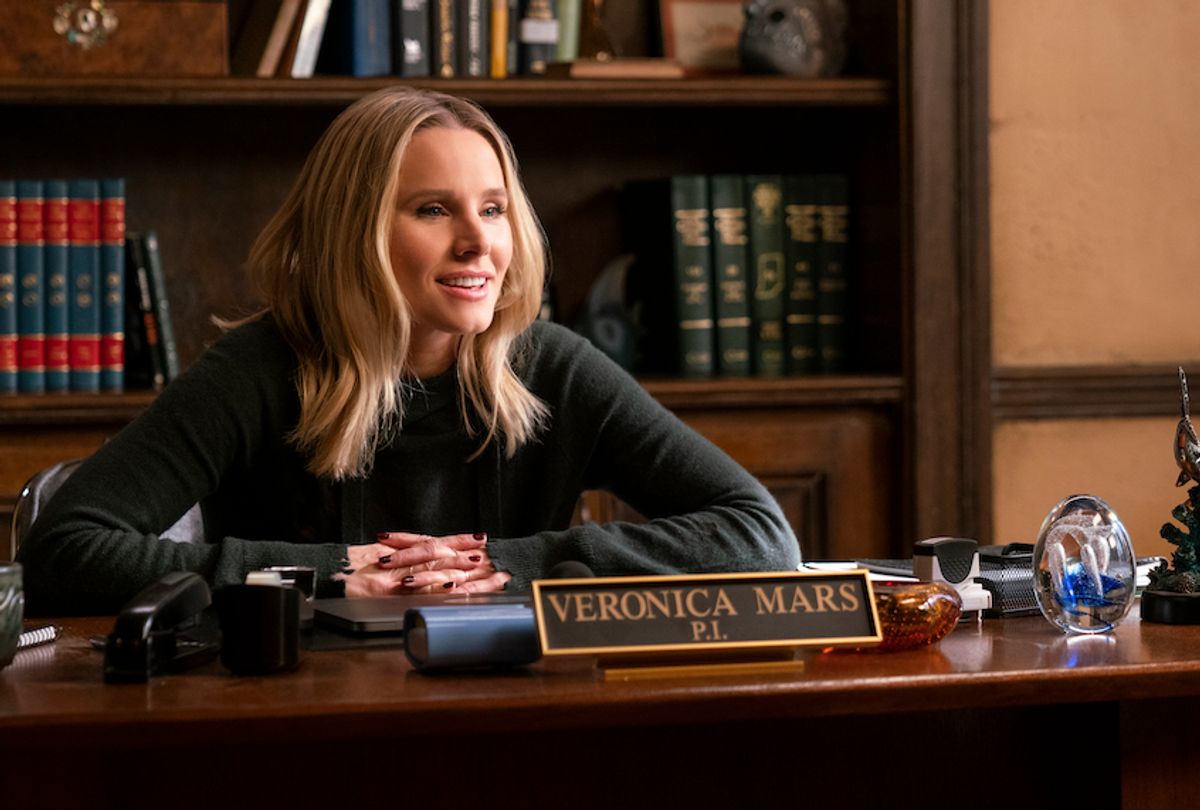 Spoiler alert: this story discusses a crucial plot development at the new season of "Veronica Mars," currently streaming on Hulu. If you haven't watched the entire season, stop reading now.

Growing up moves us beyond former habits, places, ways of conceptualizing the world. A portion of that transformation is a matter of choice. The rest is born of necessity or force.

This is the message of “Veronica Mars” at the end of its fourth season, dropped a week early on Hulu following its Comic-Con appearance in San Diego. Veronica’s return is a welcome one, a rarity in an environment where revivals are plentiful but not always warranted or desired.

“Veronica Mars” was and is one of the greatest TV power fantasies that appeals to women of all ages. Veronica is introduced as a teenage girl wise to the unfairness of life but never one to shrink into shadowed fear or moroseness, narrating her life in voiceover, her deadpan tone affecting a wry distance from her emotional reality. It’s the kind of series the most ardent fans re-watch and introduce to others as a means of connection.

Rob Thomas imbues Veronica with timeless, ageless traits she displays from the start: Smart, brave, wise-cracking, formidable, she’s a resilient heroine who nevertheless displays vulnerability, a woman with a hard shell and a marshmallow center. When “Veronica Mars” debuted in 2004 there was a tendency to liken the teen detective to Buffy Summers, minus the supernatural upgrade.

Sunnydale, Buffy’s hometown, is obliterated at the end of “Buffy the Vampire Slayer.”  Neptune, though, remains right where it is. Some fans may be comforted by this immutability; in truth, many favorite TV properties are beloved precisely because the characters and settings exist in familiar bubbles.

But Veronica was never necessarily bound to one place, no matter how much it may comfort viewers to take Mars Investigations or Neptune for granted. Nor, for that matter, is she guaranteed a happy ending. Few noir detectives are. That’s what makes them such effective crime solvers and classic protagonists — they count on the worst in people and expect life to disappoint.

I suspect this is why Thomas wrote a game-changing 11th hour shocker into the fourth season finale.

Like the crimes that divided Veronica’s teenage years between blissful innocence and hardened, unfair reality, that act represents the final separation between the tender-hearted girl and the adult crusader Veronica was destined to become.

This also means that if Hulu renews “Veronica Mars” beyond this eight-episode run, it will be a fundamentally different show — which could open the character up to wonderful, vital new stories or, like the moment itself, mark the death of something fierce, formidable and beautiful.

(Last warning: from this point forward this article specifically references a major plot spoiler in this new season. If you haven’t watched all of the fourth season, stop reading now.)

In any case, much as we adore Logan Echolls (Jason Dohring), the boy who once hated Veronica and grows up to be the man who loves her more than anything, he’s also the one true tether pulling her back to Neptune. Thomas writes Logan as sure and reliable, a man of integrity and action worth waiting for — even though Veronica’s struggle to do that creates strife in their relationship.  He’s even eye-candy, attracting the attention of drooling and much younger spring break coeds ogling his sculpted six-pack as he emerges from the surf and steps into this new season. Logan is a keeper, a man who makes compromises to stay with Veronica and who is worth meeting halfway.

Naturally, Thomas kills him off. He must. As long as Logan is around, Veronica cannot evolve.

We met Logan at the same time that we met Veronica, when she was a junior in high school. At that tender age the DNA of a hard-boiled detective already had emerged in her personality. Today, as shown in the crowd-funded 2014 movie, she’s a partner in Mars Investigations alongside her father Keith (Enrico Colantoni), a business that like every other independently-owned outfit in the seaside town of Neptune, Calif., is struggling to survive.

Logan spends much of the first season behaving hatefully towards Veronica, but by season two they have become an on-again, off-again couple. In the movie, Logan has pulled his life together and joined the Navy.  The why and how of Logan’s enlistment isn’t entirely explained, but whatever. The movie was created specifically to give “Veronica Mars” characters and their devoted fans the resolution all were denied by the series’ cancellation after its disjointed third season.

The film also provides a glimpse into the problem Logan poses to Veronica’s overall character arc: when he’s implicated in a murder, Veronica returns to Neptune to clear his name despite being on her way to a successful law career.  By the film’s end, Logan’s name has been cleared, LoVe (the ‘shipping name for the couple ) is back on and Veronica has replanted in Neptune, abandoning law and life in New York to work as a private detective. Legally, she's an adult, but her heart remains somewhat tied to teenage desires.

And as the Hulu season kicks off, viewers still get the same Veronica, more or less. She is still living by the sea. Only now, instead of cohabiting with a protective mutt named Back-Up, she’s got a monstrous, gentle dog named Pony. Even better, she lives with Logan, who now works in Naval intelligence and bounces back and forth between Neptune and classified hotspots around the globe.

This is the life 'shippers must have wanted for their girl and the boy who loves her. But this is not a detective’s life. It may be easy to forget that season 3 is the drama’s weakest because Thomas was encouraged to play up the series’ various romances at the expense of its cases, effectively diluting a dark, intriguing character study into another primetime teen romance.

This forgets that the most intriguing mystery of “Veronica Mars” is Veronica’s heart-driven sensibility.

Thomas and Bell remind viewers that despite all of the maturity and wisdom Veronica displays, she’s still prone to letting the fears and concerns of her age nag at her. She’s allowed to be a teen in the show’s initial guise, even as she traverses a range of adult scenarios, and deals with crimes against her peers — including her best friend — enacted by adults.

In doing so, audiences commiserate with Veronica and every other character in “Veronica Mars” whose  adventures prove that teenage dramas and anxieties really aren’t that that far removed from the agita of adulthood and the arbitrary nature of life.

This gnawing unpredictability pervades the fourth season’s eight episodes, with Neptune and Veronica depicted as entities caught between the tensions of past and future, expectation and tough reality.

Bombs are exploding all around Veronica and her hometown; metaphorical explosions rock her personal life, not the least of which being signs that Keith may be suffering from dementia.

Veronica’s relationship with Logan, however rocky, is about as solid as it could be. Duty calls Logan away from Neptune several times during the season, but in a subplot in which he accepts a job as a politician’s security detail, he acts as Veronica’s eyes and ears while kicking ass when necessary.

Thomas could have paired these two and carried their relationship into future seasons, effectively making Veronica and Logan the modern-day equivalent of “McMillan and Wife.”

Alas, “Veronica Mars” never was designed to be a series about a crime-fighting couple. If one were to envision which detective its main character were to grow up to resemble, it would be “Prime Suspect” heroine Jane Tennison. And Jane is not a romantic.

The fourth season of “Veronica Mars” finds a balance between pleasing everyone who has held the faith for 15 years of fandom and opening the door to new possibilities. Right after season 3 was cancelled, Thomas proposed a new story for Veronica, placing her in the F.B.I.  The CW, "Veronica Mars" third season home, passed on that new incarnation but Thomas apparently never gave up on the possibility of showing us what Veronica would look like as a full-fledged adult.

Throughout her story, the grimmest of circumstances coax some of Veronica’s most Philip Marlowe-esque traits to come forth. Her best friend’s murder activates the first of them, helping her to contend with the realization that she’s been drugged and raped by an unknown assailant at a party.

But much of her toughness, cynicism and noir-toned outlook is inherited from Keith, a former sheriff who had grown accustomed to losing face, making him an effective private investigator. Neither Keith nor Veronica trust anyone except each other, and the series frequently finds occasion to test that bond. Ultimately in these latest episodes, that doesn’t fail. One day it, too, will be gone. Part of being an adult is accepting that nothing lasts forever and that those who guide you will one day vanish.

There’s a wrenching, satisfying moment in this new season when Veronica admits out loud that the two people she can’t live without are her father, Keith, and her great love, Logan. The last scenes in the finale jump ahead to a year after Logan’s death, with Veronica is still alive and very much moving forward to places and stories yet to be explored. The finale leaves us to mourn what can never return and entertains a curiosity to see which mysteries are in store for Ms. Mars. It’s an unexpected denouement for a character so many love, but in the way of all great affairs, it also keeps us interested.