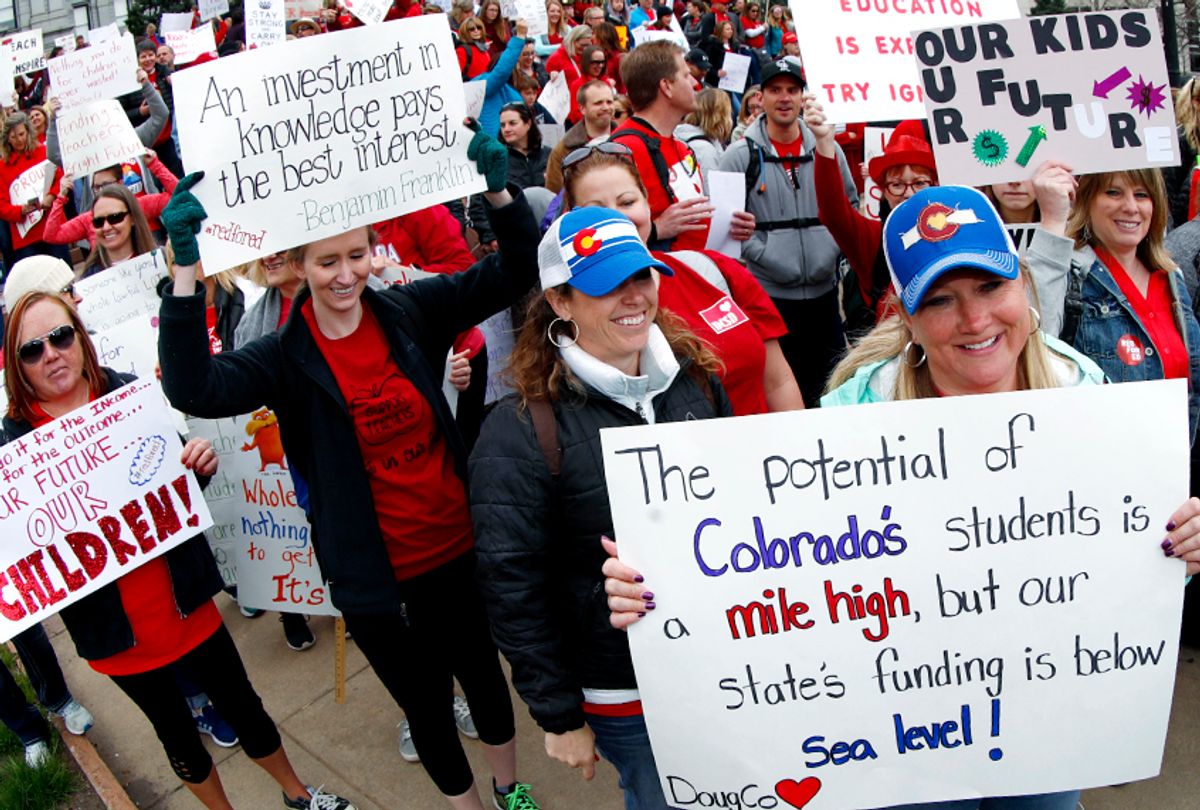 Teachers march around the state Capitol during a teacher rally in Denver. (AP/David Zalubowski)
--

The Trump administration has proposed a change in rules governing union membership for federal government workers that could embolden federal agencies to discourage staff from joining or remaining in their union.

The proposed rule, published in the Federal Register on Friday, would enable federal workers to drop union membership — and opt out of paying membership dues — at any point after their first year of membership. A rolling opt-out rule would mark a break from current practice, in which workers can revoke their membership at yearly intervals upon their anniversary of joining.

Kate Bronfenbrenner, senior lecturer and director of labor education research at Cornell University’s School of Industrial and Labor Relations, tells In These Times that beyond a mere administrative tweak allowing workers to opt out of membership whenever they please, the policy opens the door for employers to bully workers out of staying in their union, or joining in the first place. She said the issue of dues deduction could be a pressure point for employers to “intimidate and coerce workers” out of union activity.

Employers, in this context, are the Trump appointees heading dozens of federal agencies that together employ millions of workers, including 1.1 million employees represented by unions. These agencies include the Departments of Veteran’s Affairs, Defense, and Agriculture, the Internal Revenue Service, the Food and Drug Administration, the National Park Service, the Environmental Protection Agency, and many more.

“Under the current administration, we’ve seen very intense anti-union activity,” Bronfenbrenner says. “This is not a law for employees. This is a law to allow employers to push workers out of the union.”

Nicole Cantello, president of American Federation of Government Employees (AFGE) Local 704 representing 1,000 Environmental Protection Agency (EPA) workers in Illinois, Indiana, Michigan, Ohio, Wisconsin and Minnesota, tells In These Times such rules interfere in the union-worker relationship by eliminating the opportunity for meaningful conversations about why a member might consider leaving the union, or what she calls a “cooling off period.”

“We’re already struggling under a similar rule,” Cantello said, referring to directives in a contract the EPA “imposed” on nearly 9,000 EPA employees. “We feel it is equivalent to union busting.”

The latest salvo in an ongoing attack

“They are throwing out our contracts, enforcing illegal executive orders, and now trying to make it harder for workers to join and stay in the union,” Cox said. “Their ultimate goal is to destroy federal sector unions, and we will do everything in our ability to prevent that from happening.”

The proposed change comes amid a series of moves aimed at hollowing out federal unions. Those efforts received a boost this week when the U.S. Court of Appeals gave the green light to Trump’s executive orders limiting collective bargaining and the amount of time federal workers can spend on union activities. The National Labor Relations Board also just made it easier for employers in both the public and private sector to eliminate unions.

The proposed membership withdrawal change also follows on the heels of Janus v. AFSCME, a 2018 Supreme Court decision that barred public sector unions from collecting “fair share dues” from workers who are represented by the union, but who opt out of full membership. Janus, the result of a suit bankrolled by right-wing think tanks, brought the rest of the public sector in line with the status quo for federal workers’ unions, where union membership and dues payment was already voluntary. By invoking Janus, which argued that fair share dues infringe on workers’ free speech rights, the Office of Personnel Management’s (OPM) new membership revocation proposal lays bare its anti-union sentiment.

The drive to wipe out federal unions isn’t new. “They have wanted to get rid of AFGE and other federal unions for a long time,” Bronfenbrenner said, pointing to the history of Reagan era union-busting and privatization under both Bush administrations. Now,  increased organizing in federal unions in recent years — including a historic 2011 AFGE win securing a bargaining unit of 44,000 Transportation Security Officers as well as support among federal workers for the $15 minimum wage campaign — could further unsettle the anti-union bosses at the helm under Trump.

“This administration is tied with Corporate America,” Bronfenbrenner adds. “They are going to act in the federal sector the way they’ve acted in the private sector.”

In research published in a 2009 briefing paper, Bronfenbrenner found that “the overwhelming majority” of private sector employers in the United States “are willing to use a broad arsenal of legal and illegal tactics to interfere with the rights of workers,” including a “combination of threats, interrogation, surveillance, and harassment” to undermine union election processes.

Bronfenbrenner tells In These Times that anti-union maneuvers, from Janus to the rule change on federal union membership revocation, introduce a similar playbook to the public sector. Together, she believes these actions are about “giving employers more power to bust unions.”

Conservative groups such as the State Policy Network, which helped fund Janus, already have aggressively targeted public sector workers urging them to opt out of their unions, but those campaigns have proved far less effective at ushering in a fatal blow to unions than many anticipated.

The OPM, the federal agency that manages the government workforce and human resources matters, submitted the proposed rule to the Federal Labor Relations Authority, which will accept public comments on the policy change until August 12.

Bronfenbrenner says the new guidelines would ultimately enable employers to “interfere with the day-to-day ability of workers to engage with the union without fear of intimidation, coercion, and threats.”